There are no services available.
You have permission to edit this article.
Edit
Home
News
Election 2020
Bottom Line
Sports
SCENE
Photos & Video
Opinion
Obituaries
Unleashed
Classifieds
The Vanished
1 of 4 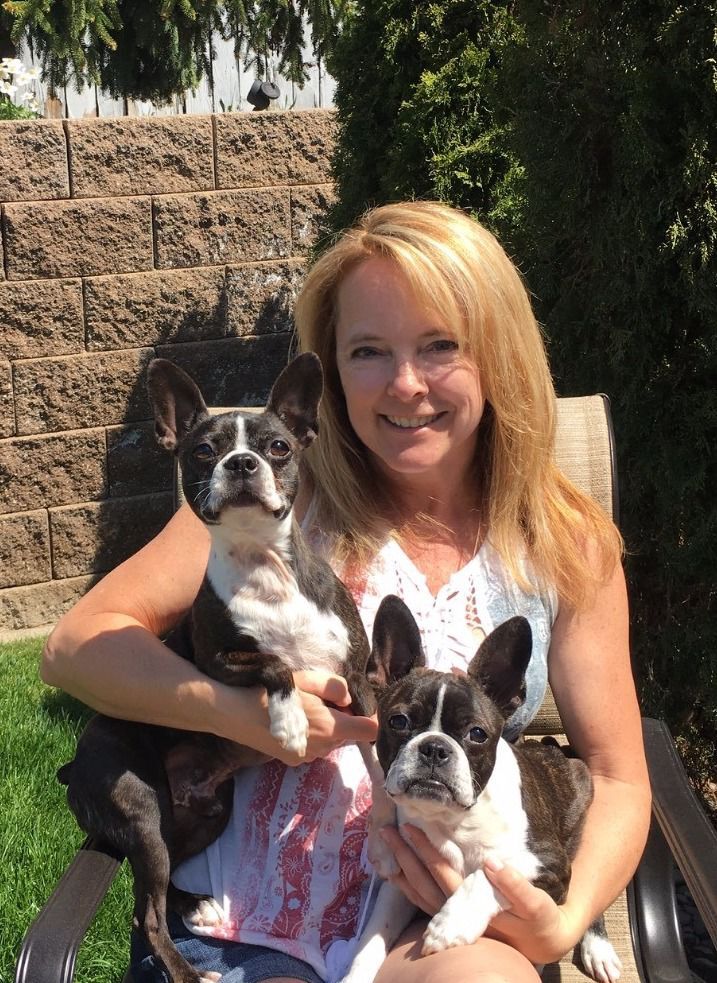 Debbie Ehrhardt had a good job in middle management, but she decided to risk it all and pursue her dream of working with animals. 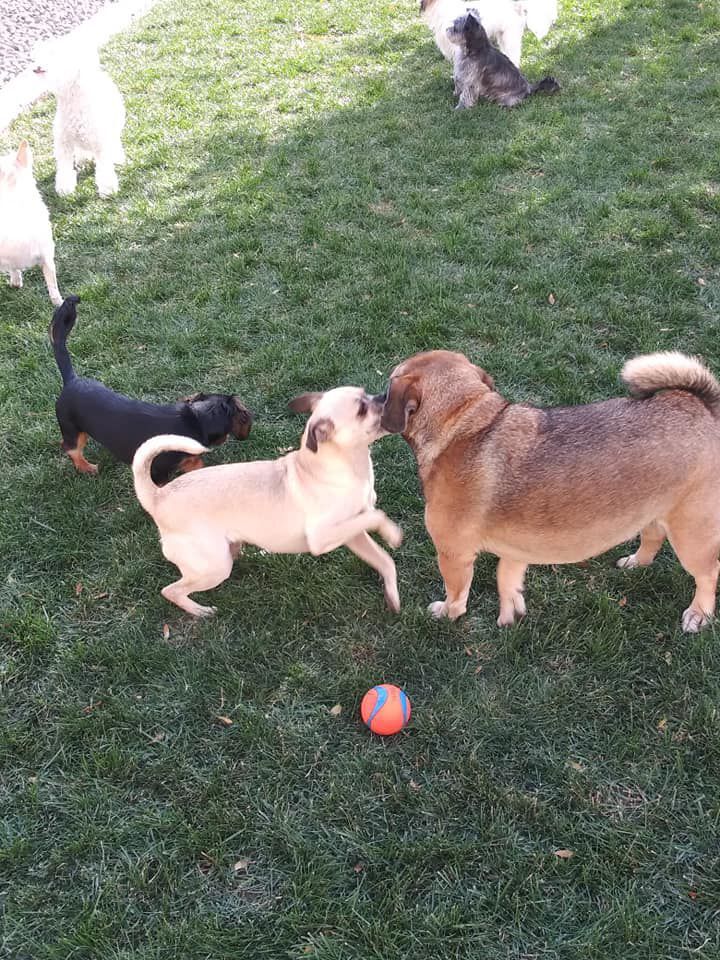 Trading boardrooms for boarding kennels was a leap of faith for Yakima's Debbie Ehrhardt, but she has no regrets. 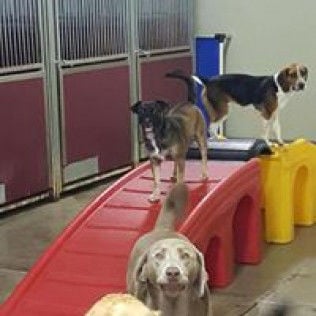 Furry guests at the resort get lots of time to play ... 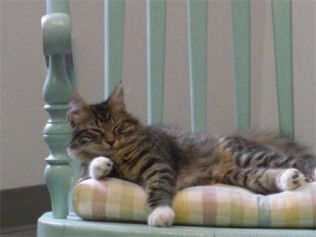 Debbie Ehrhardt had a good job in middle management, but she decided to risk it all and pursue her dream of working with animals.

Trading boardrooms for boarding kennels was a leap of faith for Yakima's Debbie Ehrhardt, but she has no regrets.

Furry guests at the resort get lots of time to play ...

Debbie Ehrhardt likes to defy the odds. She calls it jumping in with both feet

So when she decided to follow her dream and open Little Paws Pet Resort, a business to care for four-legged friends, it didn’t matter to her that everyone thought she was crazy.

“Anyone beginning a business is learning as you go,” Ehrhardt explained. “It’s how I live my life.”

The Yakima native attended business college following her graduation from Davis High and had settled into a career at a local manufacturing business. In a decade she rose from part-time receptionist to mid-management. But in 2002, Ehrardt realized she was just not as happy there as she had hoped.

“As a kid, I was in 4-H and learned about grooming, training and showing dogs. I grew up, got married, had kids and forgot all of that,” Ehrhardt said.” Then I heard that pet day care was a huge developing industry and I realized that I really missed working with animals.”

She opened her first shop in a small building at Tieton Drive and 49th Avenue.

“Most people were worried about their building and did not want anything to do with it, but I found the right landlord,” Ehrhardt said. She leased that building and quickly expanded into a north Yakima facility as well.

Eventually, the business at 1314 Gordon Road became the main day care site and she closed the West Valley site. At that point, Ehrhardt expanded to include boarding services for dogs and cats. She also added dog grooming services.

About five years ago, Ehrhardt sent two employees through school to become master trainers and Little Paws grew to include dog training services. For a brief time, the training was done at a small house near the main facility. But when one trainer moved away it was more efficient to keep the pack under one roof, so the Gordon Road facility now houses all services, including the grooming.

Lacie Jewett worked for Ehrhardt for years before turning her skills into a separate business — Groomingdales. It still operates out of a room at Little Paws, but in a room that Jewett now leases from Ehrhardt.

“She wanted to have her own business eventually and I wanted to support her,” said Ehrhardt. She added the arrangement has advantages for everyone, including customers who have one-stop-shopping at Little Paws.

Customers are required to have their pets vaccinated against kennel cough, a highly contagious condition caused by viruses or bacteria.

“We ask our customers to not bring their pets in if they have been to another facility in the past two weeks,” Ehrhardt said. “It is on the honor system, but it benefits all of the facilities in the valley because kennel cough jumps facilities so fast.”

Ehrhardt is proud of the reputation she and her staff have earned around the region.

“We work with local vets and have gained a good reputation with them over the years,” she said. “Our facility is very clean and our policies benefit everyone.”

Ehrhardt credits her staff for much of the business’ success. Nine employees work with the critters now, trimmed down some because of the COVID slowdown.

When Little Paws had to close shop in March, Ehrhardt was determined not to let the pandemic take a bite out of her livelihood. She and her staff spent the next month and a half working on procedures for reopening safely once they got the go-ahead. The protocol has become habit now, she said.

“We have contactless entry for the animals,” Ehrhardt said. “We have a caged area set up in the lobby and one person at a time is allowed inside. The owner puts the pet inside the cage, removes their collar and leash and goes back out. We enter, put one of our collars and leashes on and take the pet inside. We also do the standard mask wearing, disinfecting after every person, etc.”

While cleaning and disinfecting has always been a large part of running a doggie day care, now they spend even more time on those chores. In the past, boarding has generally been the bulk of business for Little Paws, but the overnighters are down these days because people are traveling less.

Helping to fill the gap are things like the Howl-o-ween Paw-ty and summer pool parties for the day care pack. While lots of work, the festivities are wildly popular with pets and owners alike. They usually include extras such as party treats, costume contests with prizes and a treat hunt.

Through it all, Ehrhardt is still chasing her dreams despite the worldwide pandemic.

“My goal is to expand,” she said. Currently, the business includes 3,500 square feet of indoor space with a separate cat boarding room, indoor play area and kennels.

The outdoor playground is about 2,500 square feet of green grass, shade trees and solid eight-foot fence. Cats remain indoors at all times, but dogs divide their boarding or day care time between inside and out. The dogs are split into groups according to size and temperament for their play times.

“It has been on my radar for a couple of years to make the facility much bigger,” said Ehrhardt. “We have enough property to enclose it and make a larger outdoor play area, perhaps even an area that owners and pets can use together,” she added.

Besides aiming to be the cleanest facility in the area, Ehrhardt prides her business on customer care, and it’s easy to see that it’s is a priority for the owner. Because her allergies to dogs and cats put her in the doghouse with her doctor, Ehrhardt now works from home most days while her dedicated staffers run operations at Little Paws.

While Ehrhardt’s four-legged customers can’t speak, her business certainly seems to be as big a treat for them as it is the rest of the community.