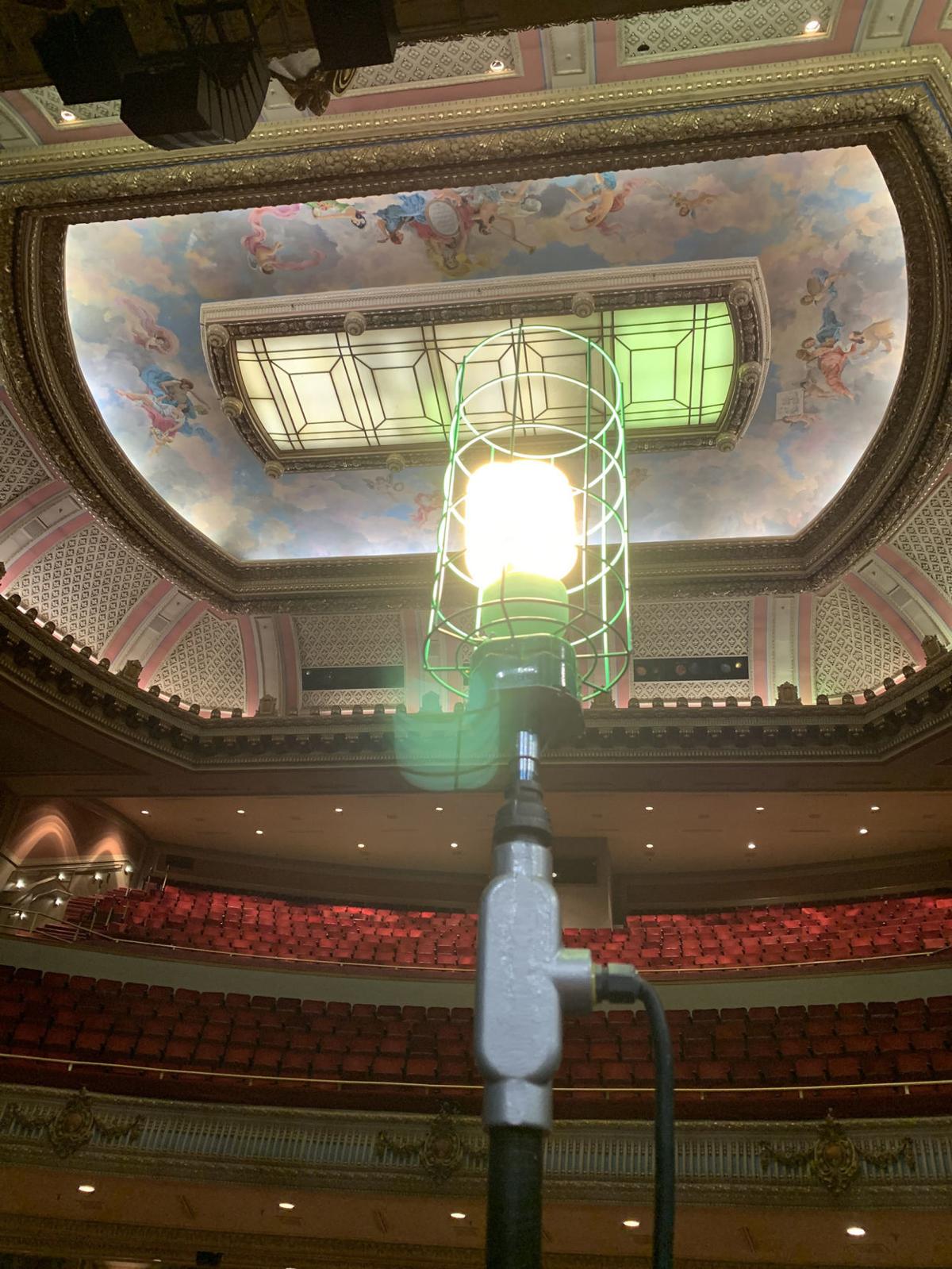 A “Ghost Light” illuminates the stage of The Capitol Theatre. 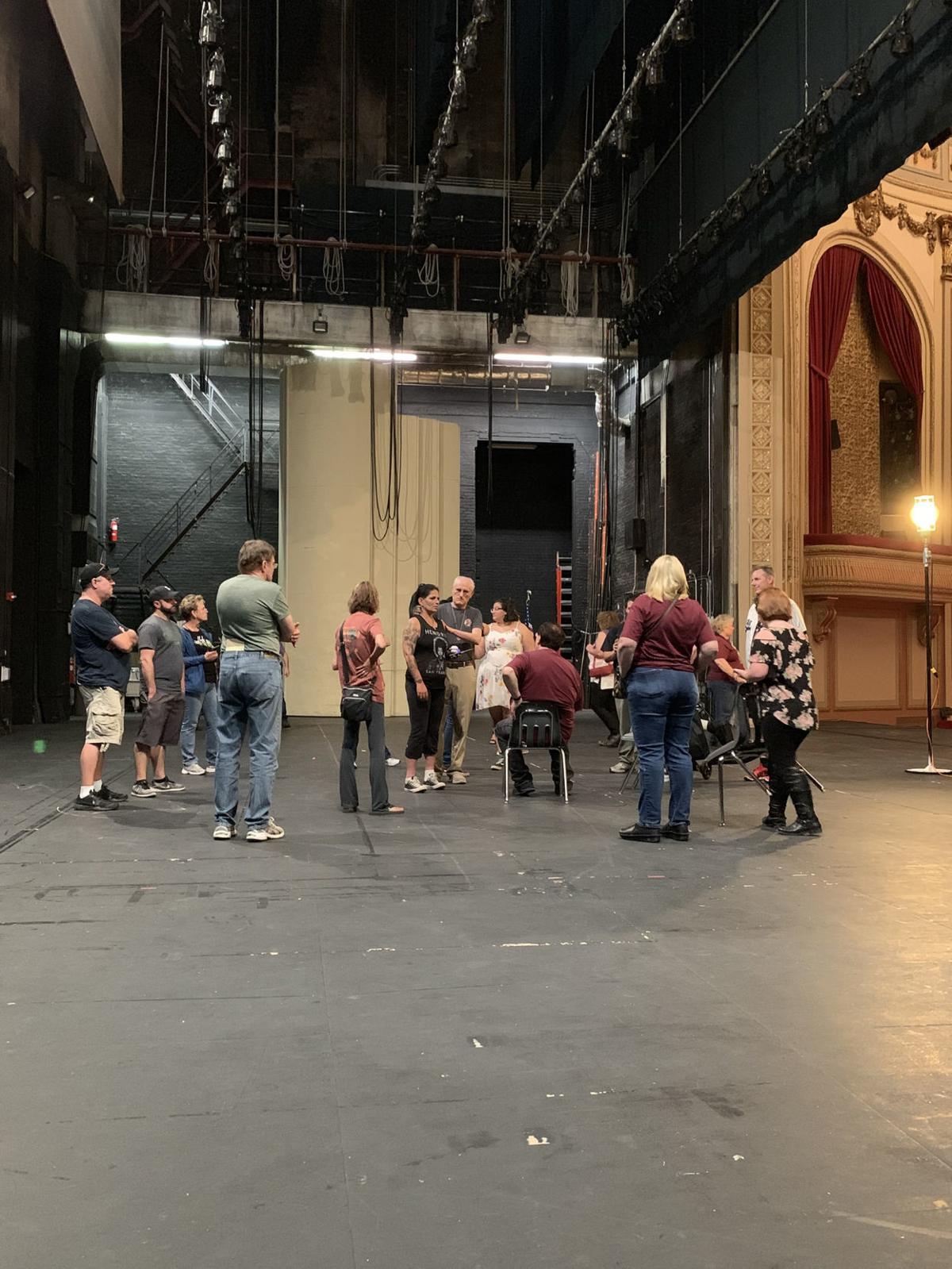 A “Ghost Light” illuminates the stage of The Capitol Theatre.

Among the main things Washington is known for — besides apples and hops — is history. And in the city of Yakima, the local attraction known as The Capitol Theatre is full of history.

On May 3, the area paranormal investigation group known as The PAST is Present — the first part of that name stands for “Paranormal And Spirit Team” — conducted an investigation at the site for the purpose of finding evidence of current spiritual activity in the theater. (By sheer unplanned coincidence, the investigation also came one week before the 35th anniversary of the original “Ghostbusters” movie.)

The volunteer investigators are members of the community who all share an interest in ghost hunting. Shellie Sauve, director of The PAST Is Present, said: “I would describe (our members) as very friendly, reliable, trustworthy. We all have each other’s back. We get along; we have fun.”

She also feels the group’s purpose is to offer opportunities to assist those in the area who might need their members’ particular expertise: “Usually, people contact us if they think there is something paranormal in their house.”

The group started its recent investigation at The Capitol Theatre by gathering in the main lobby for a quick discussion. They decided to split up to take different parts of the building in hopes of making contact with spirits.

The legend of the haunted theater is based around the story of Shorty the ghost. The account is that Shorty was stagehand at the theater during the 1930s, and that he was in love with an actress who did not share the same feelings for him. This led to his suicide by hanging from the top of the stage. Some believe that Shorty’s spirit remained in the theater, and for some this serves as the reason behind strange occurrences during shows and for experiences the theater’s employees may have encountered of the former stagehand’s high jinks.

May’s investigation began with one of the tour guides, Sierra Hutton, leading the group upstairs into the upper balcony of the audience seating. There, the investigators sat in the empty seats and turned on their equipment. They had with them some ghost-hunting equipment similar to that seen on the SyFy Channel’s long-running “Ghost Hunters” TV program. The equipment being used that night included infrared signals, EMF (electro-magnetic field) readers and audio recorders.

The group’s approach was to remain sympathetic to the ghosts, making sure to introduce themselves as friendly investigators. During the first review of things that night, the members reported their electronic equipment failing easily and quickly. Members claimed their phone batteries and infrared readers were already draining at an unusual rate, despite being fully charged before the investigation. As the exploration continued, the local analysts claimed to hear noises and responses such as knocking communication.

For the other half of the team that was in the basement: Below the stage, where the other part of the investigation team was working, spiritual signs were coming up on the EMF readers. One investigator noticed writing on the famous “artist wall” of the theater — the oldest wall that survived the building’s 1975 fire and that contains the signed names of past performers — read “The Rose Garden.” After asking about the title of this play to any spirits, the EMF reader started reacting in a stranger manner than before.

After each half of the team had obtained results from different locations of the theater, they concluded their investigation with one last attempt at contact with the spirits. On the building’s stage, the group gathered in a circle and began to question the ghosts. Surprisingly, they seemed to apparently receive some very specific answers. Words like, “Jessie” and “mother” were heard by the investigators’ equipment, which intrigued the entire team.

After an eventful night, Sauve shared some feedback.

“I would describe (this investigation) as very active. A lot of people had feelings and sensations, and we also got a lot of responses on audio recorders.”

Thinking about what she liked best about the investigation, Sauve shared that she felt satisfied with the interactions with the spirits.

As for the rest of her colleagues, these community volunteers with the fascination of the paranormal plan on investigating more ghosts, all motivated by their desire to help those who might need their services.

It just goes to show: If there’s something strange in your neighborhood, you’ll know who you’re gonna call.

Regan Hutchinson is an incoming senior at Selah High School.