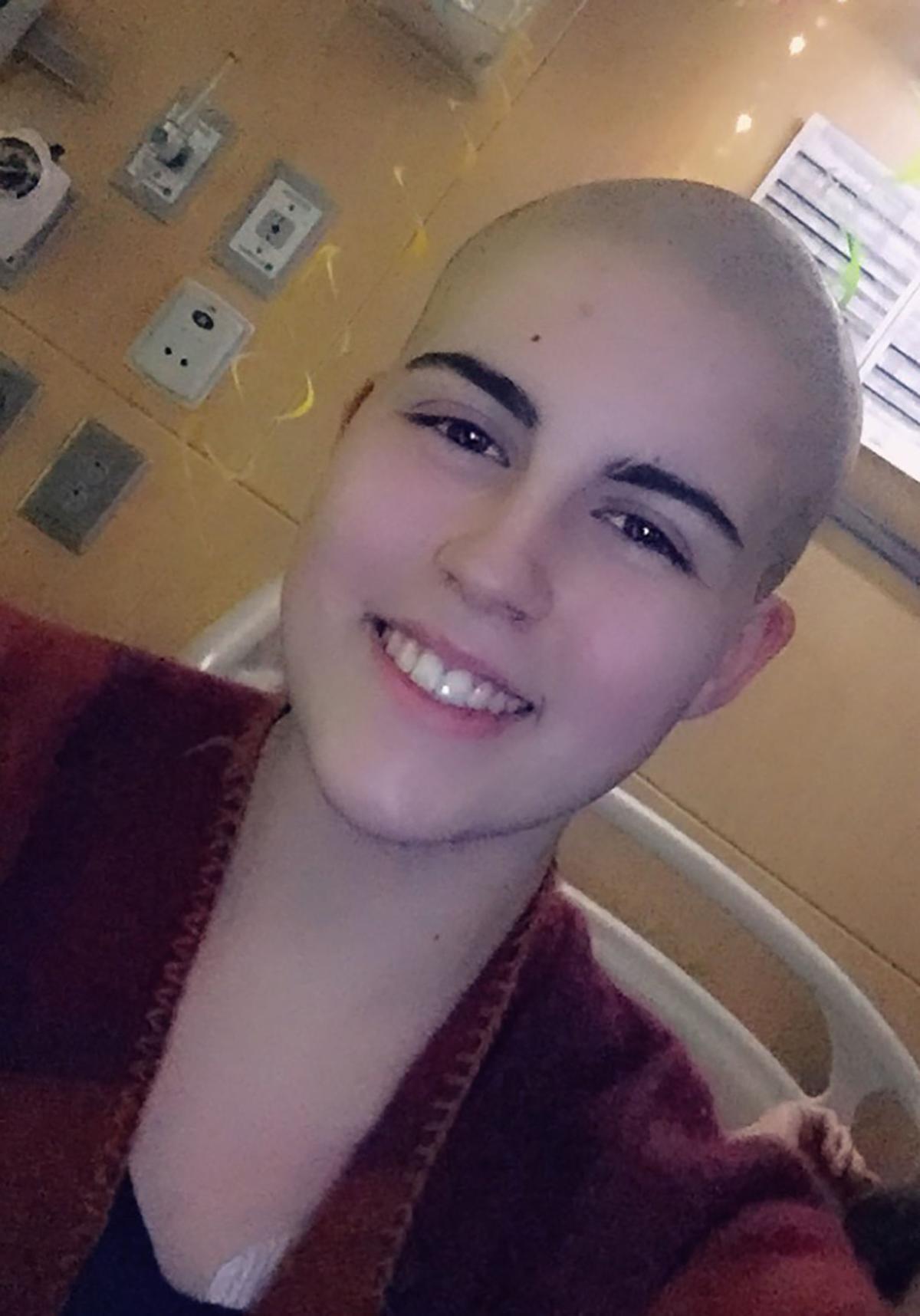 Moira Lindner smiles as she takes a photograph of herself during her time at Seattle Children’s Hospital. 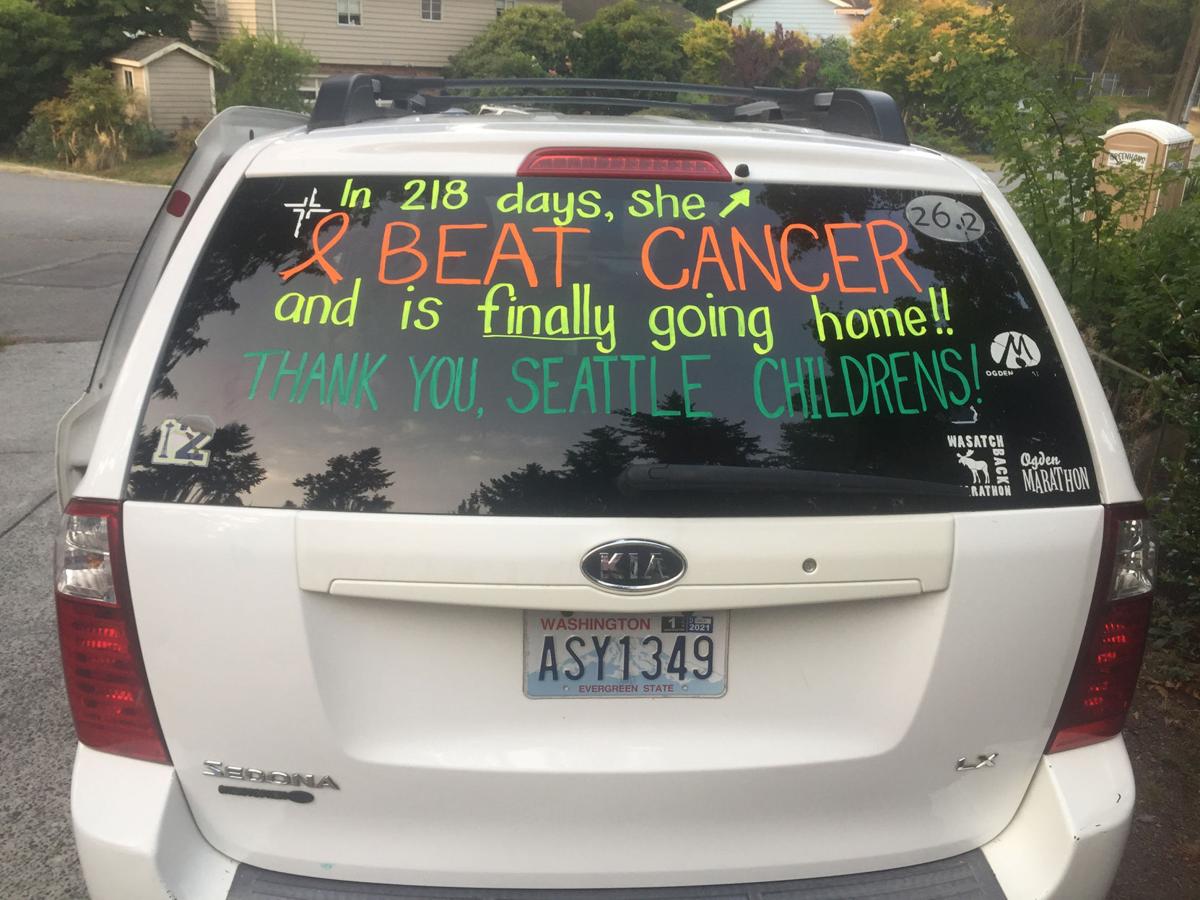 The Lindner family car at the home of Moira Lindner's aunt and uncle's home in Bothell on Sept.11, 2020. Moira's mom wrote the message on the back window just before the drive back to Yakima that day when Moira returned home for the first time in seven months.

Moira Lindner smiles as she takes a photograph of herself during her time at Seattle Children’s Hospital.

The Lindner family car at the home of Moira Lindner's aunt and uncle's home in Bothell on Sept.11, 2020. Moira's mom wrote the message on the back window just before the drive back to Yakima that day when Moira returned home for the first time in seven months.

Editor’s note: Moira Lindner joined the Yakima Herald-Republic’s Unleashed teen journalism program as an 11th grader in the fall of 2019. The following account details what happened in her life midway during that 2019-20 school year.

When considering the hardest thing we have endured, some may recall the loss of a loved one, being cheated on, going hungry, or having financial troubles.

In my case, suffering from childhood cancer is my trial to bear, my honor to wear, and my story, which I have the pleasure of recounting.

If I look back to January of 2020, I would have said that it was going to be my year. I was starring in my school’s play, my academics were going strong, I was breaking out of my shell, and was in the best shape of my life. Things only could’ve gotten better if I were to win the lottery.

But just the opposite happened.

It was Feb. 7 and I was sitting in history class, and my biggest worry paled in comparison to what I was about to hear. I remember it clearly: My principal walked in the door and asked that my teacher and I report to the office. Unnerved, I stood up and walked with her to my school counselor’s room where I saw my mother sitting, hunched over, tissues in hand, and eyes red from what I can only assume was a symptom of nothing good. I sat down in a swivel chair and watched the heavy wooden door close on the three of us.

I was so nervous and confused and nothing was answered when my mother told me, “You have leukemia.”

In that moment, I couldn’t think, let alone breathe or speak. My blood ran cold and I felt a black hole form in my stomach, threatening to suck me into the void of death. It took a second for reality to come back and tears to form.

However, once they were there, nothing could stop them. Things were only exacerbated by the shock in my classmates’ voices, the horror in my teacher’s eyes, and the wails from my friends who held me tight outside the Spanish classroom.

The rest of the day is a relative blur with some quick tests being performed at Yakima Valley Memorial Hospital to confirm things, and then I was immediately sent to Seattle Children’s Hospital to get treatment started as soon as possible. In the emergency room where I was received, the minutes turned into hours that were kept in time by the steady, electric beep of the monitors strapped to me. It was around 10 at night when the first consistent face was introduced to me, Dr. Brittney Lee of Seattle Children’s Oncology Department, and she would become an angel in the eyes of me and my mother.

February was the second hardest month in my journey, with the chemo taking its toll mentally and physically. I immediately began to lose weight and appetite, a situation that the nutrition staff desperately fought.

And then I began to lose my hair. At first it was just a few strands on my pillow in the morning, then it was fingerfuls as I washed my hair. Finally we had to cut it when any sort of shaking of the head would let loose chunks. I wept that day, watching my hair and all of the time I put into growing it out all fall to the floor with a buzzing fanfare.

Things were only compounded with the effects of the coronavirus. There were a few people who got to visit me the first two weeks I was in the hospital. But, after that, lockdown protocols began to take effect for the safety and health of all of us immunocompromised children. It made sense, but that didn’t make the loneliness better. Over time, more restrictions would take effect such as mandatory mask wearing outside of the room. At one point our doctors would not even do in-person rounds.

In a weird way everything from my new experience began to seem normal. Waking up at ungodly hours for medications. Being lulled back to sleep by heart monitors and crying children. Binge-watching TV shows. Pulling around an IV stand everywhere. Puking on a daily basis. And experiencing an existential dread as I faced my own mortality before any child should ever have to.

Time passed, lockdowns got stricter and life went on chugging. In this period, I was lucky enough to befriend some of the most selfless and wonderful people I have ever known. It would be impossible to name them all here, but a special shoutout goes to Allison, Robbie, Katie, Elizabeth, Kelsey, Dasia, Letty, Lindsay, Dr. Shireen, and the head of my treatment team, Dr. Cooper.

It was June and I had made it past the halfway mark in terms of treatment. I was required to go through five rounds of chemotherapy, and I had just started round four. I was progressing faster than they anticipated and taking the treatment really well. There was even a possibility I could be home between late July and early August.

But, as Murphy’s Law writes, what can go wrong will.

It was in this round that I had the closest brush with death in the form of infections. On June 8, I went into toxic shock due to a bacterial infection in my bloodstream. That was the scariest day of my life as I truly thought I was going to die. The infection was causing my vessels to dilate and effectively prevent my blood from circulating. Because of this, my brain wasn’t oxygenated and I went into what’s called a hypoxic state.

Imagine being trapped in your own mind, unable to speak, move or even think. That was my reality for the next two weeks as I was moved to the ICU.

Things only got worse as I developed pneumonia and a pneumatosis, bringing me ever closer to the brink of death. I was intubated and sedated for half of my time there. One can only imagine how deeply disturbing that would be to a parent, and my mom is so strong to have been able to bear it.

Luckily enough, I got better. I returned to my treatment and to the normal oncology floor. With a slow struggle I finished round four.

It was about a month later that the doctors finally felt confident enough to start the final round of chemotherapy. I was raring to go as I anticipated getting home as soon as humanly possible.

Things started off well. Although I ended up getting another bloodstream infection, this was minor and resolved quickly. Recovery was slower than it had been in prior rounds, but eventually we were in the home stretch.

We had a date that we could go home, and Sept. 11 soon became our exodus from our 218-day captivity.

As we drove over the mountains, it was interesting to think back on all the months my mother and I spent inside Seattle Children’s Hospital, the late nights, the laughs over inside jokes, and the nights spent crying over lost time and missing home. I could never express in words how wonderful she is and how grateful I am to her, but she is truly a saint in my eyes.

Pulling into our driveway for the first time in seven months, I wept. The sight of our old house, rambunctious dogs, and elated family and neighbors was more than enough to break me. I was finally home. I was safe.

But things haven’t been easy since returning home. I have a hard time swallowing pills, and I am so tired of taking medication that I simply don’t know how I will survive old age. I am slowly working to get back into my prior physical condition and am having promising results.

There are many things I have learned from this experience, but I will quickly impart two of the essential lessons that I ask you to consider. One, the God of the Judeo-Christian faith is very real and works miracles even to this day. And two, life is so much better when it is framed through the lens of joy.

I understand that all who read this may not believe in a higher power, let alone the Christian God. But I do. He is very real and without God’s power to sustain and heal, I don’t think I would’ve gotten through this ordeal. I still sometimes struggle with the “why” of things, but I make peace in knowing that the ever-elusive “why” will show its face in due time. When it does, I know I can be thankful that I was prepared for it.

Joy is a choice, whether or not you believe that is up to you, but it is. There were so many days where I woke up sick, sad, or outright devastated. However, on some of those days I had the will to choose joy, and I cannot tell you how profoundly it changed things.

At the end of the day, though there are still lasting scars from my fight, I am glad it happened. It blessed me with new insights, wonderful new friends, and a cause worth fighting for.

• Moira Lindner is a senior at Riverside Christian School.