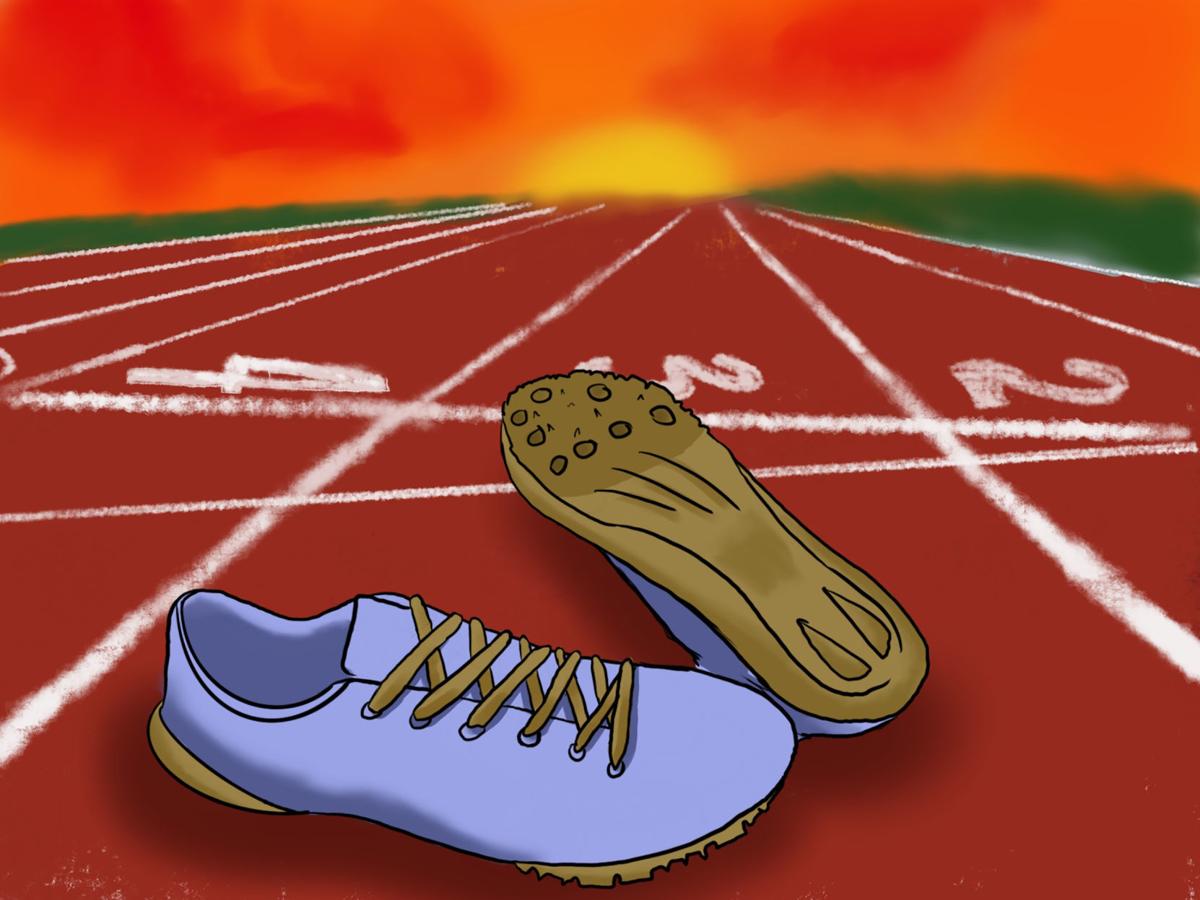 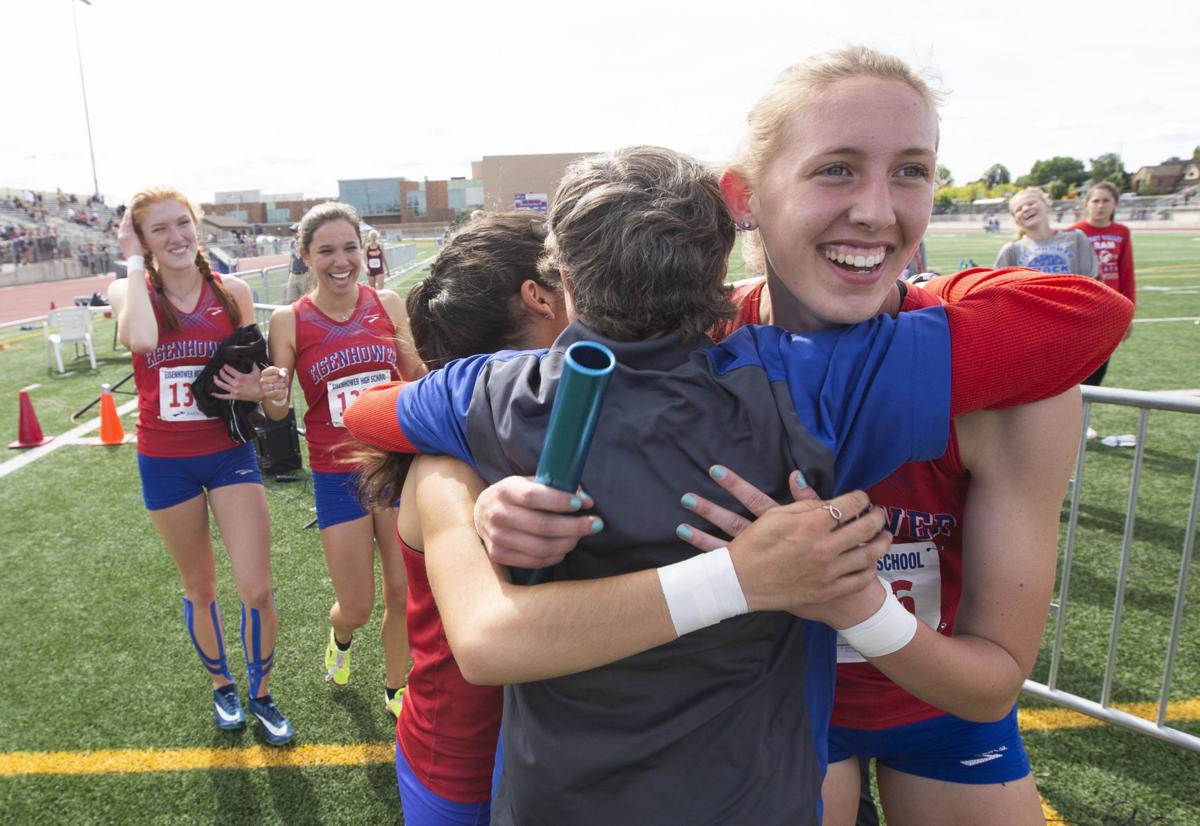 FILE — Eisenhower's girls 4x400 relay team celebrates with coaches and teammates after finishing first at the CBBN district championship track meet Saturday, May 18, 2019, in Yakima, Wash. The team advanced to the state championships with the win. 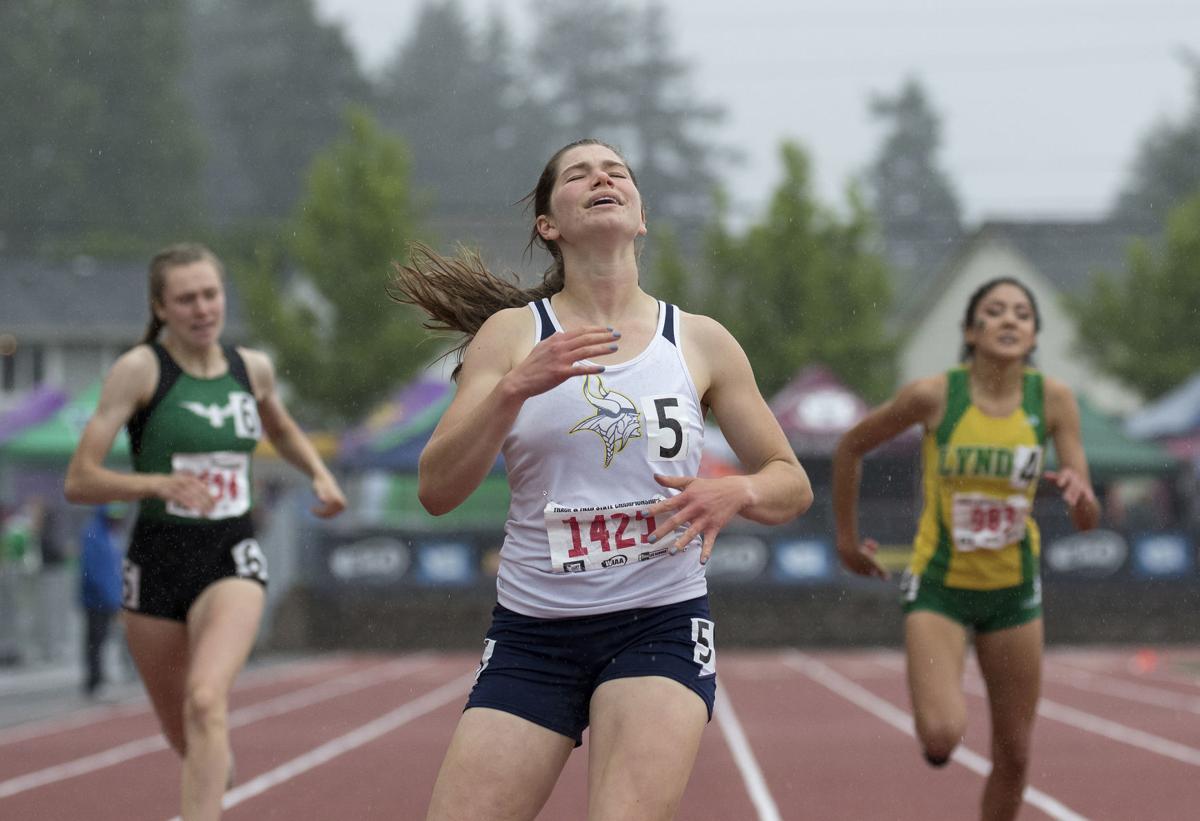 FILE—Selah’s Olivia Martin, center, smiles as she crosses the finish line to repeat as winner of the Class 2A 400 meters May 25, 2019, at the Class 2A state meet in Tacoma, Wash. 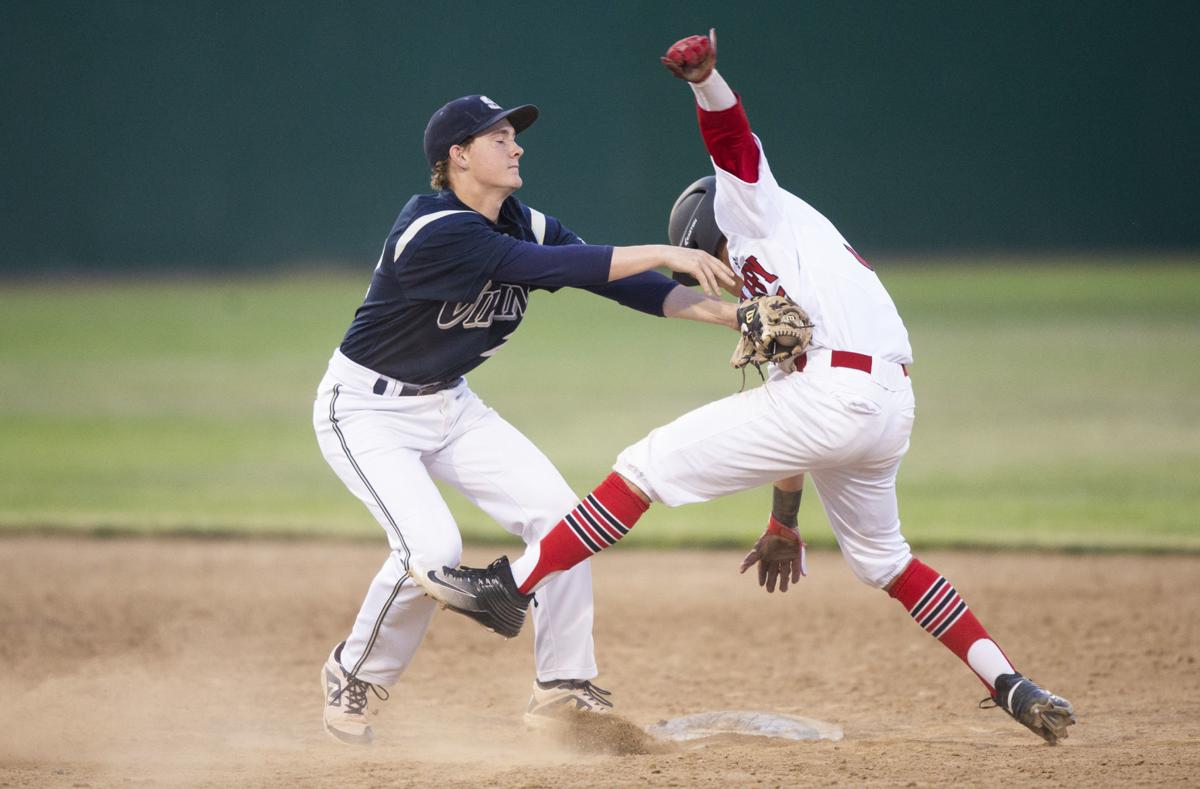 FILE — Eisenhower's girls 4x400 relay team celebrates with coaches and teammates after finishing first at the CBBN district championship track meet Saturday, May 18, 2019, in Yakima, Wash. The team advanced to the state championships with the win.

FILE—Selah’s Olivia Martin, center, smiles as she crosses the finish line to repeat as winner of the Class 2A 400 meters May 25, 2019, at the Class 2A state meet in Tacoma, Wash.

The cancellation of the spring sports season earlier this month came as a shock to student athletes. The news was especially tough for seniors and those who were planning qualify for state, and made a deep impact on the other students who are now feeling the loss of a significant piece of their high school sports experience.

Here are a few of their stories:

Ciera Reyes, a sophomore on the Eisenhower track team, had plans of returning to state in the 4x400 relay, as well as advancing individually in the 800 and the 1600. She is among the many who are making the term “really disappointed” a common phrase in describing how they feel about what’s happened to the spring season.

“My goals were set high,” she said. “I was looking forward to going to state individually and hopefully making it on the podium. Last year I didn’t achieve my goals so I was coming for that redemption this year.”

Reyes was also excited to see how Ike’s 4x400 team would perform this season, after winning the district championship a year ago. One returning member, Haven Nutting, is going to graduate this year and won’t have another opportunity to run on Eisenhower’s relay team again.

“Now I’m using this time to prepare myself to train for the upcoming cross country season,” Reyes said. “Training by myself is difficult. I’ve been having my brother ride next to me (to make it more challenging). I’m not going to let this time go to waste. I still have goals to reach and I have two more years to chase after them. This time will be used to make myself better as an athlete.”

Although Reyes will still have time on Eisenhower’s team, 12th-grader Jonas Price, one of the most talented runners Eisenhower has had, understandably felt a sense of loss over the news about the spring season being canceled.

“It has affected me a lot,” said the long-distance runner. “I had a lot of goals I wanted to achieve, goals I’ve been working towards since I was a freshman, and now it’s all gone. It hurts even more as a senior because it was my last season in the Eisenhower uniform.”

Due to the coronavirus outbreak, Riverside Christian School’s baseball, golf and track teams were all forced to end their seasons before they began. Track was especially hard hit, as the school had several athletes who had been poised to make appearances at state this year.

Will Tritz is a senior who has competed in track for all four years of high school. He was preparing for his fourth state appearance in the 4x100 meter relay and his third state race in the 400-meter run before the season’s cancellation.

“The whole season was going to be really great, and now I just don’t even get to see state my senior year,” he pointed out.

Tritz is also disappointed about not seeing the performances by the upcoming athletes who would inherit the team after his graduation.

“There were a lot of new people, like freshmen, that were really promising,” he says. “I was really looking forward to seeing how they did at meets.”

While most seniors are understandably saddened at this end to the season, other athletes may be choosing to see it in a more optimistic light, such as Isaac Immel.

The sophomore appeared at state in several events last year as a ninth grader. This season, he was expecting to reappear for the 800, 1600, and 3200 meter runs. Immel said he is most disappointed at the loss of the team bonding that normally occurs during the season.

“Getting to hang out with everyone at state, it’s really fun,” he said, adding that he’s choosing to stay positive and he’s keen on working his way off knee braces that have hampered some of his past efforts.

“I feel like not everything is lost. Now that we are not going to school, training has become a lot easier.”

Addison Ladd, a freshman at Selah High School, was excited to earn a spot on this year’s varsity tennis team. Having played tennis from a young age, Ladd was enthusiastic about the spring tennis season, looking forward to meeting new people and potentially accomplishing her goal of going to state.

“I was really sad because it was my first year doing it and it was cut really short,” she said. “But I’m sure the seniors had a worse time because it was their last year, their last chance to go to state or get a scholarship.”

Another Selah High freshman athlete, Lexi Becker, is among those who have experienced shock and disappointment. Becker, who made the varsity golf team this year, has played golf since first grade. Her hopes have included going to state and earning a scholarship for golf during her high school career.

Although disheartened by the cancellation, Becker sees a silver lining to the situation. She believes that she will now be more motivated to practice and improve.

“I gotta roll with what life throws me,” Becker says. “This is just like more practice time.”

Both Ladd and Becker plan to continue playing their sports during the next school year. In the meantime, they’ll continue to practice.

Players had just completed their required practices and were eagerly anticipating the start of competition when spring sports were postponed and later canceled.

This was upsetting for all players, but for seniors it was devastating. I loved every minute of the four years I spent playing high school tennis. I know many of my fellow seniors felt the same way.

Selah High School senior Olivia Martin was a member of Selah’s track and field team throughout high school. She is an outstanding sprinter and the reigning 400-meter 2A state champion. Martin will be running track and field at the University of Idaho next year.

“Track is a very important part of my life because of the happiness it brings me and the people I have met through the sport,” she said. “This season I was most looking forward to enjoying every moment of my senior year and being surrounded by people who make me a better athlete and person.”

She’s grateful she won a state title as a junior.

“I don’t think having won a state title made this unfortunate situation harder,” she said. “In fact, I think it made it easier. I’m glad I can leave high school track and field on a good note but, of course, I am sad when I think of what could’ve come from this season.”

Martin says most of her disappointment is reserved for her many fellow athletes.

“I was excited to watch what my talented teammates could do at state,” she said. “After all, it was going to be good. These past four years of track and field were the highlight of my high school career, and I am incredibly grateful for the relationships and memories I have made through the sport.”

Selah High School senior Chase Ergeson has been a member of Selah’s baseball team throughout high school. He began playing at age 4 and was a key player on Selah’s varsity baseball team that won the 2A state championship last season.

“When you’ve put three years into a program, it’s heartbreaking to see it end before it even really started,” he said. “Nobody thought we would get our season taken away due to a virus that has already taken so much. With a lost season, there are no opportunities for kids to be seen by college scouts, win a state title, or create even closer bonds with teammates and coaches.”

He’s learned something from the ordeal.

“It’s heartbreaking to see it end the way it did, but it has taught us all one thing: Don’t take anything in life for granted.”

La Salle High School’s Rachel Ball will be graduating in May after four years of playing competitive golf. Sadly, these four years will be finishing on slightly bitter notes, but Ball is determined to stay positive.

“Because I have played golf since freshman year, I have made so many friends and connections that I will cherish for a lifetime,” she said. “Golf has taught me so much about myself — how to handle adversity, how to enjoy the small victories.

“When I heard sports would be canceled, it was a devastating realization that I might never play competitively again. While I am very fortunate to play a sport that is individual and can be enjoyed for many years to come, I will miss playing in tournaments and the challenge that comes with competition.”

Thinking about the younger students who will still get the chance to participate in next year’s edition of the annual La Salle Foundation Golf Tournament and other events, Ball has words wisdom that only a seasoned competitor could give:

“To my team that gets to play next year, I just want you to enjoy the experience. In golf, we are often hung up on the negatives. But just remember that it’s a game that can actually be a lot of fun if you let go of your anxieties.

“I know it sounds cliché, but enjoy it while it lasts.”

Thinking about the sports season coming to a halt just after the beginning of the spring season, senior track runner Renelle Christensen of Davis High School describes her disappointment this way:

“I had a lot of goals that I wanted to achieve this season, like breaking personal records, possibly making it to state, which I hadn’t yet in track, and this season I was really optimistic. But things don’t always go the way you planned.”

For senior athletes, those anticipated last moments at meets with their team and their coaches are now gone.

However, she remains optimistic, repeating how grateful she was for the first few weeks of spring sports practices and for cross country last fall.

“Well, I don’t know what to do with my spikes anymore,” she said. “And I just got new shoes!”

She hopes athletes don’t dwell on what they’ve lost.

“Though this took away some of our last meets, last prom, graduation, last times you get to see your teacher and your classmates, it will never erase the memories that you had.

“Be grateful for those that you had instead of focusing on the negatives.”