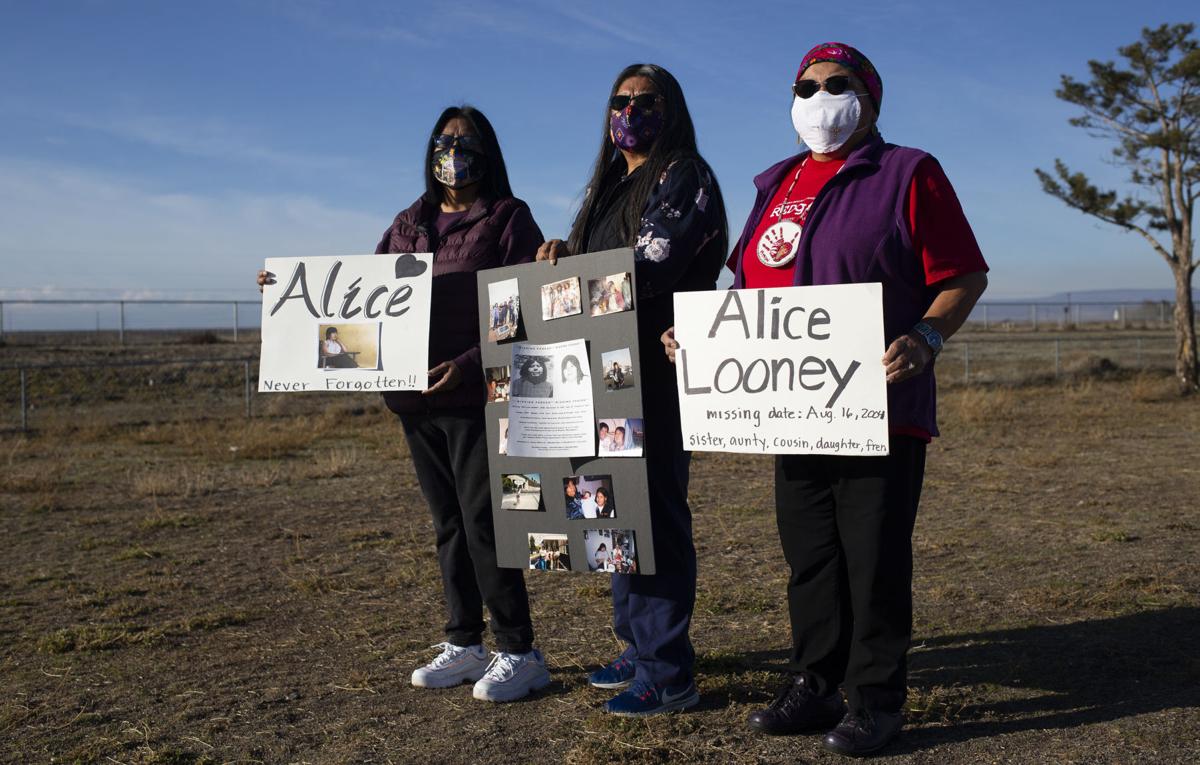 From left to right, Caroline Looney, Mary Looney and Doris Strong hold signs in honor of Alice Ida Looney, the sister of Caroline and Mary and cousin of Doris, who disappeared in August 2004 on Saturday, Dec. 12, 2020 in Wapato, Wash. The investigation into Alice Ida Looney's death is ongoing. 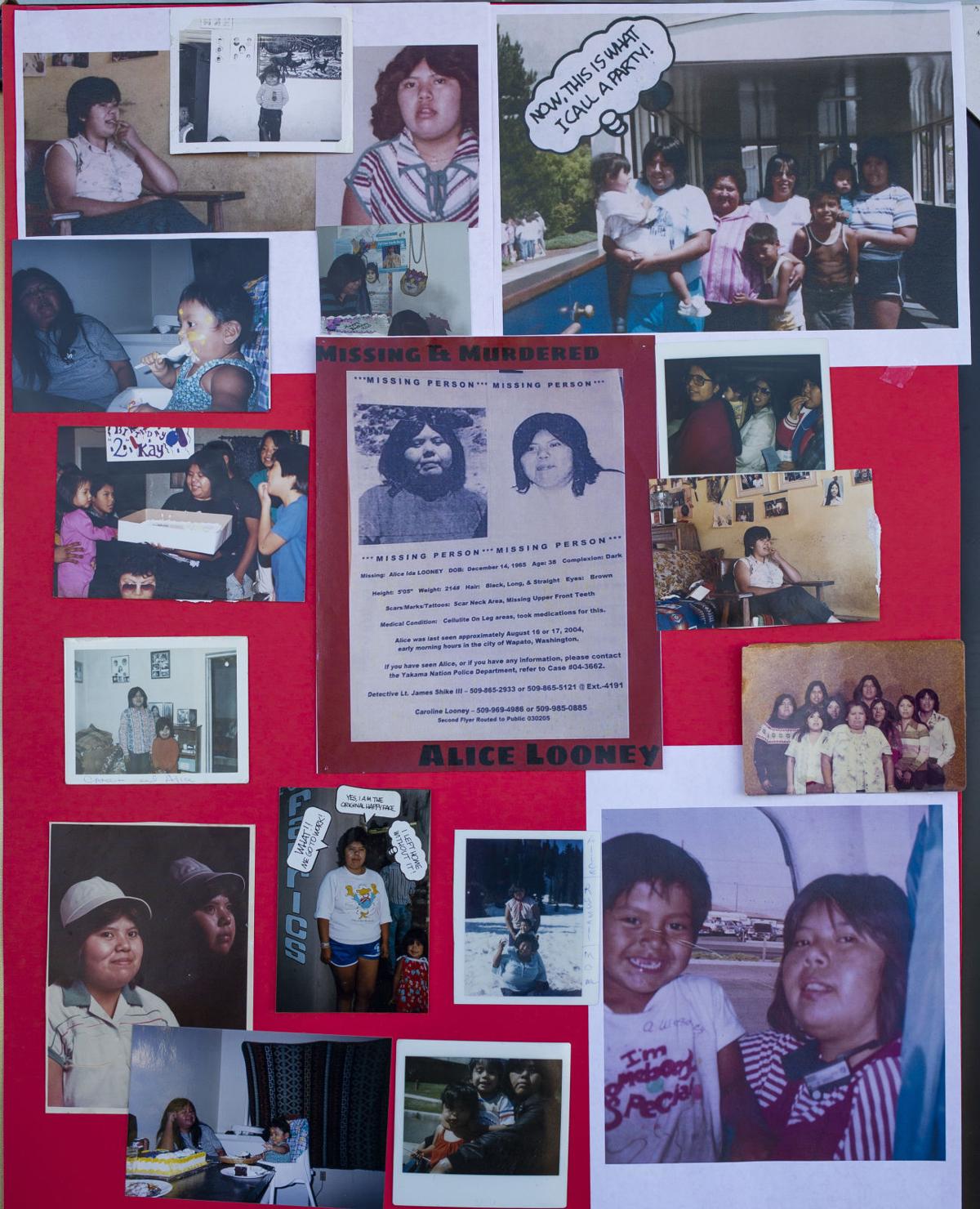 From left to right, Caroline Looney, Mary Looney and Doris Strong hold signs in honor of Alice Ida Looney, the sister of Caroline and Mary and cousin of Doris, who disappeared in August 2004 on Saturday, Dec. 12, 2020 in Wapato, Wash. The investigation into Alice Ida Looney's death is ongoing.

Caroline Looney stood with six others on the morning of Sept. 3 to honor two men whose remains had been found nearby a few weeks earlier.

The night before the memorial gathering for Josiah “Jo” Hilderbrand and Jon Cleary near U.S. Highway 97 south of Toppenish, Caroline talked to Jo’s mother, Liz Hilderbrand. She and the family of Jo’s friend, Jon Cleary, were grateful that people who had never met the men, who were murdered in early June 2019 while driving through Yakima County to a concert, gathered to honor them.

On that clear, warm morning, Looney spoke of the son she lost. And as she looked to the east, she thought of her little sister, Alice Ida Looney.

Alice disappeared in August 2004, when she was 38. She was reported missing by family, who last saw her in Wapato. A hunter found her skeletal remains Nov. 30, 2005, under a log on an island in Satus Creek.

Her relatives don’t know exactly where Alice was found in the area. Authorities won’t provide the location because the investigation is ongoing, Caroline said at the memorial. She would like to pray where Alice last lay, she said, and relatives have discussed setting a cross for her.

This time of year is especially hard for those who knew and loved Alice. Her Dec. 14 birthday and the holidays were always times for family to gather. She was buried on Dec. 3, 2005, at Wishcum Cemetery in Dallesport.

Alice, who was a Yakama tribal citizen, is among dozens of Indigenous people who have gone missing, have been found murdered and have died mysteriously on and beyond the 1.3-million-acre Yakama Reservation over decades. Many cases are unsolved.

The crisis of missing and murdered Indigenous people has received greater attention in the past few years. Cold cases are getting another look from investigators at seven federal offices opened this year as part of Operation Lady Justice, a task force established by President Donald Trump in November 2019. Washington State Patrol has two tribal liaisons to work with families, Patti Gosch and Dawn Pullin. They’ve been sending cold cases to federal investigators, including some from the Yakama Reservation.

Advocates in the U.S. and Canada have become increasingly vocal in bringing awareness. Muckleshoot tribal citizen and gifted runner Rosalie “Rosie” Fish shared information about Alice, who is a relative, and three other Native women when she earned three first-place and one second-place finish in the Washington state high school track finals in May 2019. Fish wore a red handprint on her face to symbolize Native woman and girls silenced by violence and had the letters MMIW — Missing and Murdered Indigenous Women — in red on her right leg.

But solving cold cases is challenging in many ways, even with fresh eyes and improving technology. Evidence is often scant or nonexistent after years have passed. Some of the people who might know what happened at the isolated location where Alice was found, about 12 miles southeast of Toppenish, are dead, said another sister, Mary Looney.

They got closure, she and Caroline said, but not justice.

“We just want to know what happened,” Mary said.

Born in Toppenish to Eva and Wilkins Looney Sr., Alice was the youngest of six girls and five boys. She was named for her paternal grandmother, Alice Thompson.

Though she never had children, Alice enjoyed taking care of her nieces and nephews and was close with many of them, in later years checking in more often with them than their parents. She fished on the Columbia River and learned the tradition of drying fish from her mother, a tradition Caroline continues today.

Wilkins Looney Sr. died in 1969. Alice grew up in the lower Satus area of Yakima County and Georgeville, in Klickitat County, in houses filled with siblings, relatives and friends; her mother welcomed many people to her home and usually had a vanload of people wherever she went. Alice attended Goldendale Elementary School and the Fort Apache boarding school in White River, Ariz.

“She would never talk about her school down there,” Mary said.

Mary and Caroline, along with cousin Doris Strong, recently recounted details of her life as they remembered Alice. Doris grew up alongside the Looney sisters, almost like a sister herself. She and her husband, George, are spiritual leaders in the Indian Shaker Church, and their support was especially precious when Alice went missing and after she was found.

Bullied because of her size, Alice suffered from depression, Caroline said. She also struggled with addiction to drugs and alcohol and was seriously injured in an October 1984 car accident. She wore a halo brace and had to learn how to walk again.

“She was lost after our mom died because mom spoiled her. She’d give her $40 and drop her off at (the Pan Cigar),” Caroline said of a Wapato bar that closed years ago.

Alice would disappear for weeks at a time but eventually return. She didn’t drive and would catch rides, occasionally hitchhiking back and forth from Goldendale. She had an on-and-off relationship with a man she sometimes lived with, her sisters said. She also stayed with relatives, including Caroline. She liked visiting with Caroline’s young daughter, Tiana.

“She would always see the nieces more than us,” Mary said.

On the evening of Aug. 16, 2004, Mary and her husband spotted Alice at Legends Casino in Toppenish. She wanted a ride to Wapato, so they dropped her off at the Roadrunner store in Wapato about midnight. That was shortly after Alice spent the weekend at Caroline’s house.

They told her to be careful. With $20 in her pocket, Alice reassured them she would.

‘Everybody has that right to say no’

Her sisters learned Alice was missing several days later, when her favorite nieces and nephews hadn’t heard from her.

Caroline worked with a friend to create a missing-person flyer, posting copies wherever she could. They scanned newspapers and watched television news reports for any information. Someone said Alice had been seen walking along Track Road, so they started searching that area, looking for anything there — or anywhere — that might help them find her.

Caroline told her kids Alice was missing and urged them to keep an eye out. “Even if we were driving, we’d be looking by the side of the road,” she said. “We walked along Track Road. We were uncovering stuff along fences.”

“We were grasping at straws,” Doris added.

A month before she disappeared, Alice said she and a friend were going to go into treatment for addiction, so her sisters checked hospitals and treatment centers when she went missing. They also called around to other tribes, including Nez Perce and Warm Springs, Mary said.

Relatives and friends still wonder about the man whom Alice was reportedly seen with, and anyone who may have been involved in her disappearance and death.

“No matter what, everybody has that right to say no,” Doris said. “No, take me back. No, I don’t want to be there.”

Tribal police led the investigation early on, with the FBI and the Yakima County Sheriff’s Office assisting. The FBI later assumed jurisdiction, as noted in a May 2009 news release announcing the results of a two-year investigation into the deaths or disappearances of at least 16 Native women on or in proximity to the Yakama Reservation.

Alice’s is the most recent among those cases. Her likely cause of death is listed in the release as inconclusive.

Relatives were glad they could bring Alice home so soon after the autopsy, which revealed that her body had been in the creek more than a year. Her remains were identified by dental records and steel braces attached to her upper-leg bones, the result of the 1984 car accident.

That happened in the case of another Yakama woman, Destiny Louise Lloyd, who was last seen on Christmas Day in 2017. Her body was discovered four days later just off Marion Drain Road near the intersection with Harrah Road.

Though the manner of Alice’s death is also classified as undetermined, the forensic pathologist who conducted her autopsy referred to it in his report as a probable homicide, Curtice said.

“There were definitely suspicious circumstances,” Curtice said, including the remote location and a neck bone fracture that could be the result of strangulation.

The hyoid bone was examined and showed a lateral fracture on the right, forensic pathologist Dr. Jeffrey Reynolds wrote in his report. “That could be cause from lots of different things, but it is also seen with strangulations,” Curtice said.

At least two other Native women who died in a string of homicides in the Lower Yakima Valley through the 1980s and into the 1990s were strangled.

Though Reynolds said in his report the cause of Alice’s death was “probable strangulation,” he also noted there wasn’t enough evidence to support it was a homicide, Curtice said. There was a lack of information that could be gained from the remains, Reynolds wrote.

“He just said probable because that’s what he’s leaning toward,” but there was not enough evidence, mainly because of decomposition, Curtice said. “That’s why it’s listed as undetermined.”

Her relatives realize they may never know exactly what happened to Alice. “Just having her back was enough for me,” Caroline said.

As for anyone involved in her disappearance and death, “They will pay even though I don’t know who it is,” she added.

Anyone with information about the disappearance and death of Alice Ida Looney may call the Yakama Nation Police Department at 509-865-2933 or the Yakima FBI office at 509-453-4859.