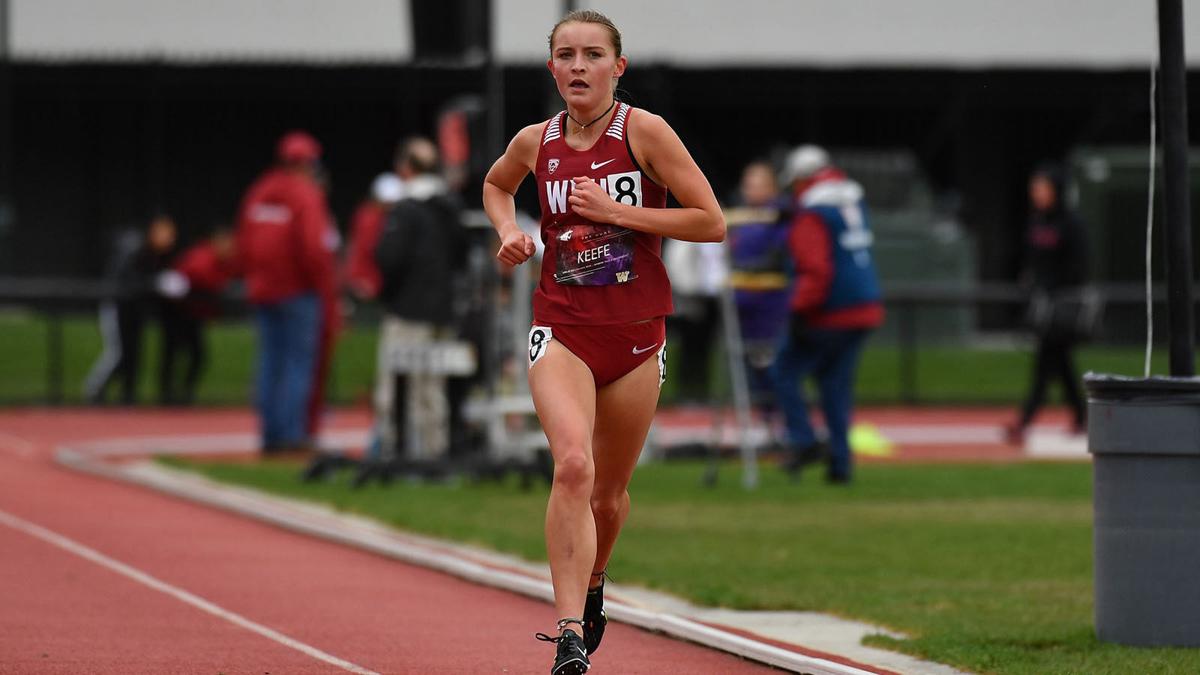 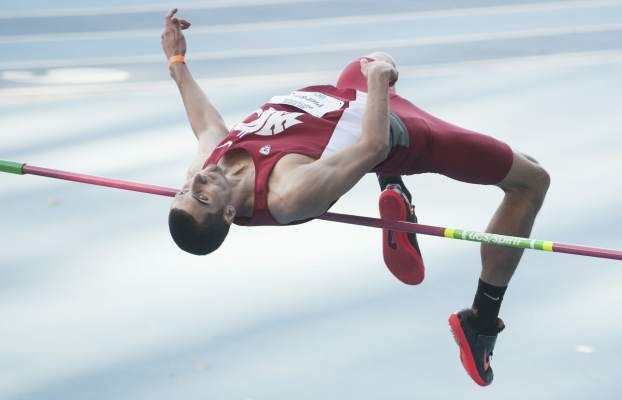 Naches Valley graduate Thane Pierson high jumped 7 feet, 3 inches while at Washington State, the best ever by a Valley grad.

Naches Valley graduate Thane Pierson high jumped 7 feet, 3 inches while at Washington State, the best ever by a Valley grad.

This is surprising for someone nearly six feet tall who rarely contested this event, but then again it’s not surprising because of who it is. At the core of Blair’s heptathlon skills was speed — her 200 best was 24.01 (23.98w) and if not for Jaeger she would have another one of these records. Jaeger also had a best of 11.82, albeit wind aided.

While Jaeger was a sprinter specialist at West Valley, she proved capable of the full quarter-mile as a two-time Big Sky runner-up, clocking her PR as a junior and backing it up with 53.96 as a senior. She also ran on MSU’s 4x400 for four straight years, never placing lower than second at Big Sky and setting a school record in 2013.

After starting at Eastern Washington, Keefe improved dramatically at WSU in the spring of ’18, slicing four seconds off her previous best at 4:16.57 in the NCAA regionals for the Cougars’ second-best time ever — then came another PR a week later in the NCAA heats. She also ran 2:09.76 in the 800 and 4:46.21 for an indoor mile in 2019.

A three-time state champion at Sunnyside, where she was also a standout point guard in basketball and the school’s ASB president. Gonzalez ran WSU’s second-fastest time ever at the Mt. SAC Relays in Walnut, Calif. She is currently a middle-school teacher in Corvallis, Ore., and her husband, David Dumble, is a track coach at Oregon State.

Three straight top-10 finishes in state cross country while at West Valley and Eisenhower, where she was the salutatorian with a 3.9 GPA for the Class of 2006. Ran a 5:01 mile at Ike but was meant to go farther. Van De Brake was a grad student at WSU when ran this 10K and later ran a 2:49 marathon. Now teaches at Skyline High School.

Ran on Zillah’s 1A-B state champion cross country team in 2004 as a junior, but she spent the spring months as a standout outfielder on the softball team. Mendoza was a strong member of CWU’s cross country teams but found her niche in the steeplechase, cutting 30 seconds in less than a month to place third in the GNAC finals.

At age 36 with two small kids, Crane qualified for the 2020 Olympic Trials with this performance in just her third attempt at the distance last October at the Indianapolis Marathon. Married to Cal Baptist cross country coach Adam Tribble, Crane was a two-time runner-up in 4A state cross country at Davis and a four-time state medalist in track.

Blair competed in this event for only one season and her PR, which came at the Penn Relays, was Oregon’s third-best time ever. Later that spring she won the NCAA heptathlon title. At Prosser, Blair showed plenty of skill at the longer hurdles, winning back-to-back state titles in the 300 hurdles — both while running 45.0 seconds in 1988 and ’89.

A Class 4A state discus champion while at Eisenhower in 2010, Bush flourished in the shot put collegiately, reaching 48-10.75 during her freshman year. As a consistently high medalist at the Big Sky indoor and outdoor championships, Bush threw over 48 feet all four years and reached 151-11 in the discus as a sophomore.

After winning more Class B state titles in the shot than the discus, Hess became a three-time NAIA national champion in the discus. Her still-standing NAIA championship meet record of 192-7, set in St. Louis, led all collegians in 2008 and qualified her for the Olympic Trials. Hess currently lives in Yakima.

A two-sport star who scored over 1,000 career points in basketball at Ellensburg and Eastern Washington, Ulmer led the nation in her senior prep year at 177-9 (before the implement change). She was a three-time Big Sky champion. West Valley’s Lynnea Braun threw 164-11 while winning the NWAC title for Spokane in ’08.

After powering the Vikings to a state volleyball title in the fall, Jacobson set a Valley record in the discus of 148-9 that still stands after 22 years. She played volleyball at Colorado State for a season before returning to Washington and enrolling at EWU. She has four kids and lives in Moses Lake.

This was a cornerstone of Blair’s heptathlon prowess on the first day, routinely scoring in the 900-point range. She topped this height twice in the summer of 1998, first while winning her third U.S. national title in New Orleans and then again at the Goodwill Games in New York. Blair won three high jump state titles at Prosser.

This was the anchor for the second day of Blair’s heptathlons, and the dramatic highlight of her victory at the 1996 Olympic Trials when she scratched the first two of three attempts. She often competed in the long jump as a stand-alone event, having won the Pac-10 title in 1995 for the Ducks with a wind-aided 21-6.75.

With a best of 11-0 in four years of vaulting at West Valley, Irvine competed in four NCAA Div. II national meets before her senior season was canceled by the coronavirus pandemic. As a sophomore she earned her highest national medal, placing sixth, and then topped her PR in Nampa, Idaho, early in the 2018 indoor season.

From 1995 to 2000, Blair was among the best in the world and highlighted this run with an eighth-place finish at the 1996 Olympic Games in Atlanta. The three-time U.S. champion set her career best while winning her second national title and then matched it a year later at the Goodwill Games. She won an NCAA title at Oregon in 1993.

After a dazzling debut in football, including an 89-yard kickoff return the first time he touched the ball, Hooker broke the UW’s 23-year-old school record and then went on to place third at the NCAAs. Davis’ Willie Turner was close to this with his world-record tying 10.0 at Oregon State in 1967 (10.24 for automatic-timing comparison).

This was Hooker’s most consistent event, earning three top-six NCAA finishes highlighted by a second-place medal in the 2001 Indoor finals. His PR came at BYU in 2000 just prior to sweeping the Pac-10 100 and 200, a repeat effort from his freshman year which helped him earn a second Pac-10 athlete of the year award.

Focusing so much on the 100, 200 and relays at UW, Hooker rarely trained specifically for this distance but may have had the most upside here. In the summer of his junior year, he won his semifinal at the 2000 Olympic Trials in 44.78 and placed seventh in the final at 45.05, qualifying him for the Olympic relay pool in Australia.

Sweeping the AA state 800 and 1,600 in 1991, including an overall state-leading 1:52.11 in the two-lapper, Anderson showed plenty of promise for the Mustangs. He delivered four years later winning the Pac-10 title in Tucson with his PR time. Another Prosser grad, Nectaly Barbosa, ran 1:48.27 at Arizona State years later.

It’s not easy getting into Oregon’s Hall of Fame but with seven sub-4 miles and multiple All-American honors in track and cross country he did it. Blackmore, who held the Valley’s 3,200 record for 25 years, has been a highly accomplished master’s runner through his 40s and 50s and is currently the cross country coach at Linfield.

After posting 4:17-9:23 distance credentials for the Vikings, Currell ran for Spokane CC and then Southern Utah, where he clocked 14:11.29 for 5,000 in 2008. After college he was solid on the roads, running a half marathon in 1:07 and a full marathon in 2:22. He currently works for the Utah Air National Guard.

Still the state record-holder in the prep 2,000 steeple from 1986, Price took his collegiate best from 8:58 as a freshman to 8:38 three years later and placed eighth in the NCAAs. Competed in the 1992 Olympic Trials and then was hired at Ellensburg, where he coached Ja’Warren Hooker. Had a 1,500 best of 3:47.2.

After setting school records at CWU in the 5,000 (14:22) and 10,000 (30:32), Hennessy upped his mileage to 120 miles a week and in 1979 slashed over 10 minutes off his marathon best with his 2:18 for second place in the Seattle Marathon. Hennessy recently retired from a successful coaching career at Franklin HS in Portland.

After setting a state record for Ike in 1963, the 6-foot-3 Roe adjusted well to the higher college hurdles, hitting his 13.8 in the Pacific Coast finals. He also ran 21.2 in the 220 for the Huskies. At the ’67 NCAAs in Provo, Utah, he caught his trail leg, crashed to the track and broke is left leg in two places while dislocating his shoulder.

Talk about an instant and lasting success story: Ringe’s PR came in his freshman year and it still stands as a CWU school record 45 years later. He had a double major at Central in community health and food science and spent over 30 years working for General Mills, where he developed or helped with 100 new products.

In his incredibly versatile Wildcat days, Babich averaged 27 points in basketball, won state track titles in the triple jump and javelin and captured an AAU national decathlon title. The javelin carried him the farthest, placing third in the 1986 NCAA finals followed by qualifying for the 1987 World Championships in Rome.

After winning the NWAC hammer for Spokane in 2005 and ’06, the 6-foot-4 Shanklin was a two-time Mountain West runner-up at Wyoming. He found his true throwing niche in the 35-pound indoor weight throw, winning two Mountain West titles with a best of 71-10.25 and qualifying for NCAA nationals both years.

Starting out as a baseball player, Pierson switched over to track late in high school and jumped 6-8 as a senior. As a sophomore at WSU, he topped 6-11.5 and won the dunk contest at the Spokane Hoopfest. Pierson broke the 7-foot barrier in 2015 and scaled 7-3 twice as a senior, including winning the Pac-12 title in Seattle.

Not only does Hinkley still own the Valley prep record set in 1972 but his collegiate best remains the UW school record — nearly a half century later. Moreover, his 52-5.75 remains the best by any Washington prep grad. Hinkley also reached 23-11 in the long jump, and after college he became a standout decathlete.

Better known as a decathlete who competed for the UW and later in the 1984 Olympic Trials, Vegar’s specialty was the vault, where he made a drastic improvement from 14-6 to 16-0.25 as a junior with the Huskies. Vegar, who also topped 6-10.5 in the high jump, excelled in master’s competitions, clearing 14-3 at age 42.

The big year was 1980 when Gefre won the Pac-10 title with a Husky Stadium record and placed sixth at NCAAs. He qualified for the Olympic Trials but that was the boycott year, and returned for the ’84 Trials only to be foiled by a first-day injury. Gefre threw the javelin 236-6, long jumped 22-6 and ran the 400 in 49 seconds.