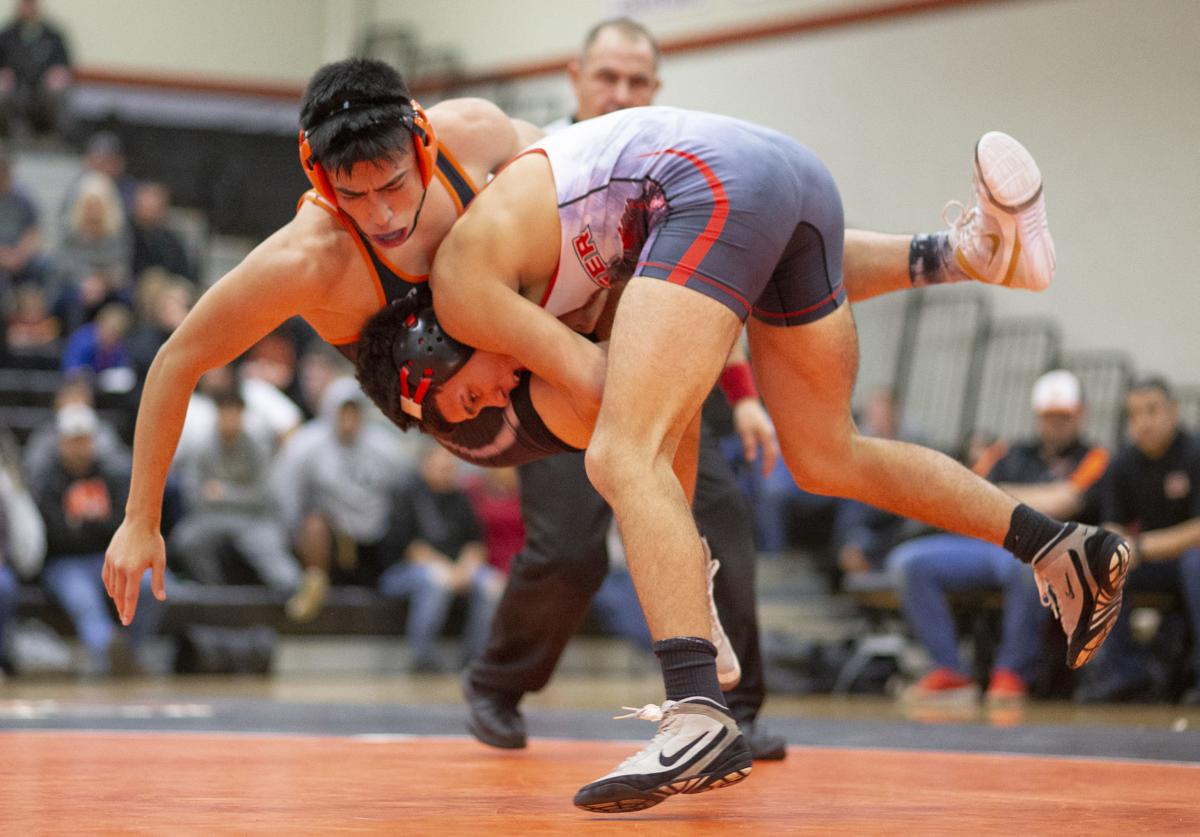 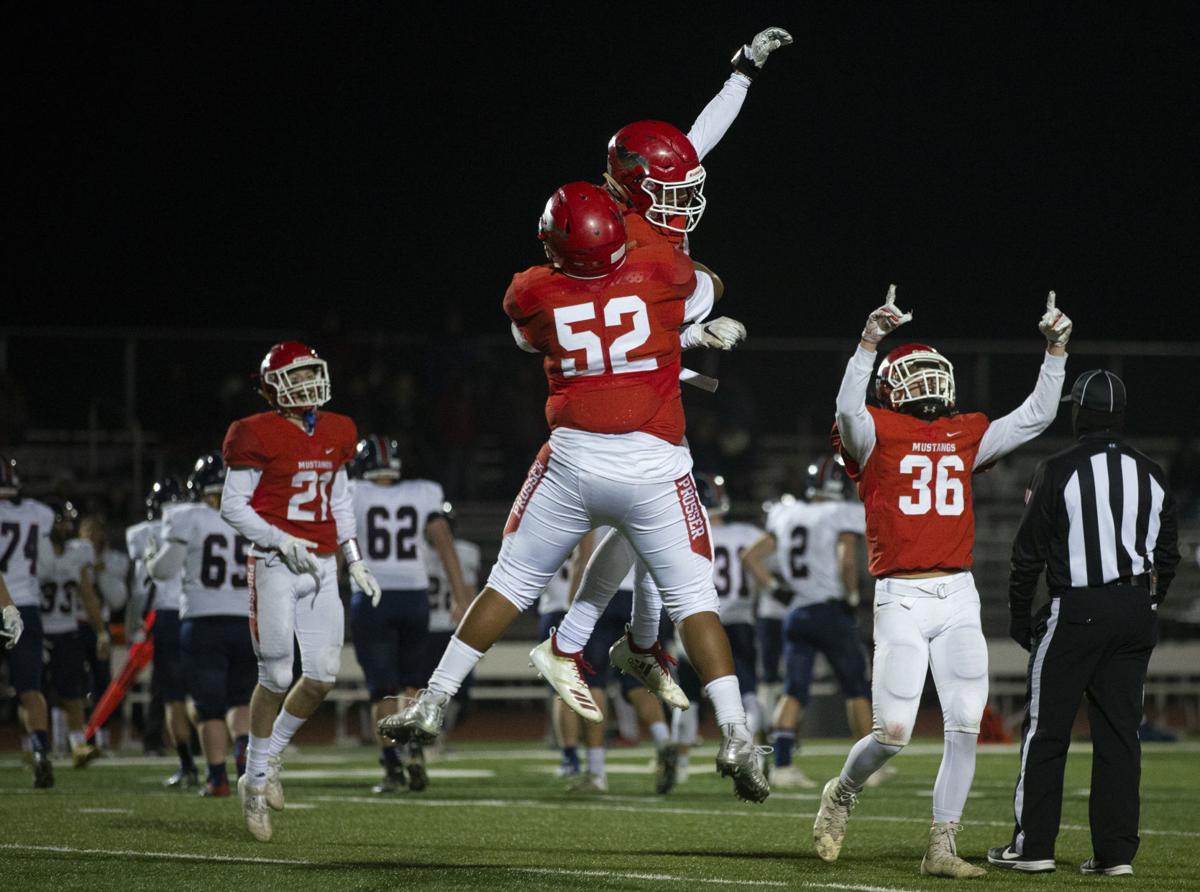 The Prosser defense celebrates after stopping Ellensburg on fourth down to win the CWAC championship on Saturday, Nov. 2, 2019 in Grandview, Wash. 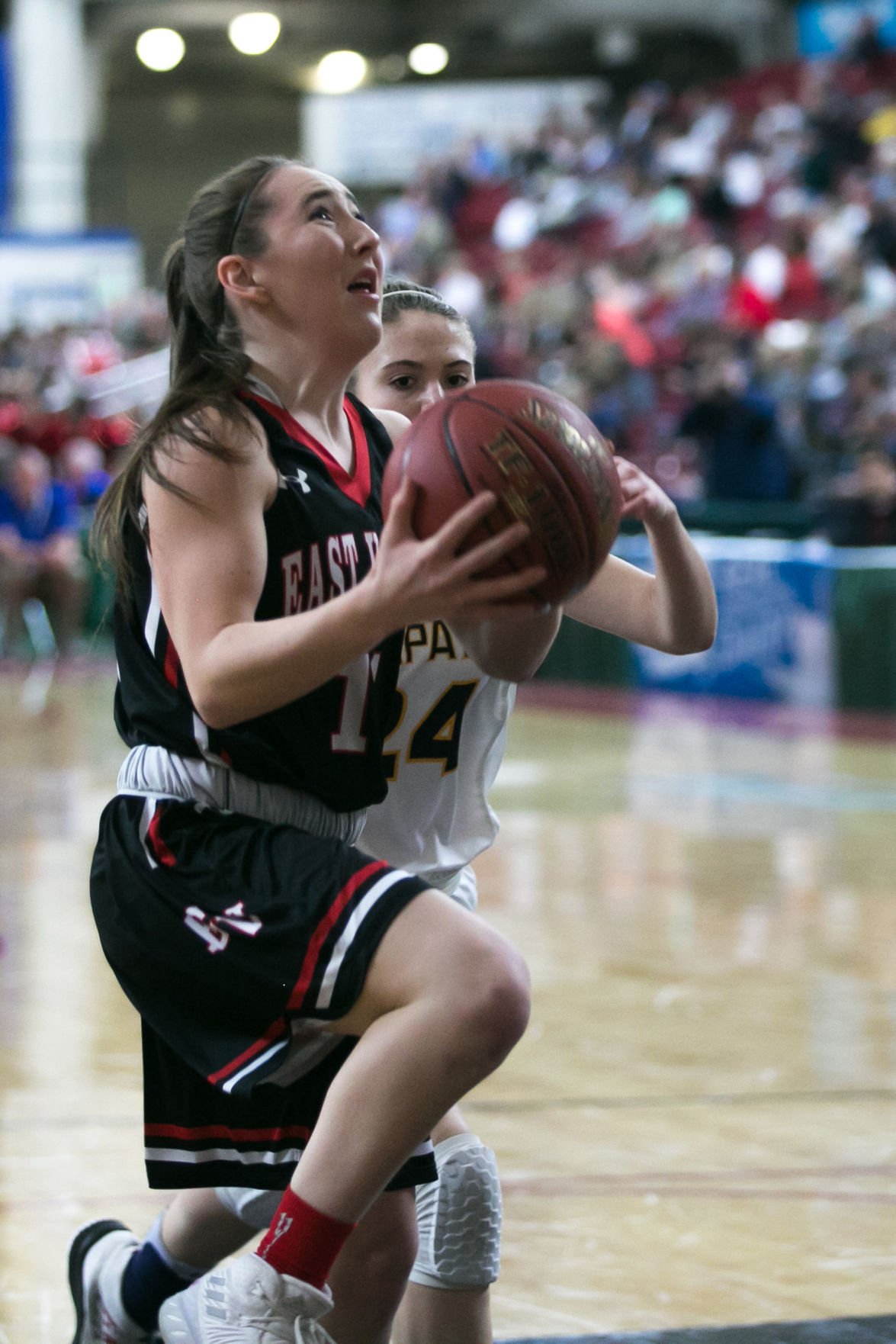 The Prosser defense celebrates after stopping Ellensburg on fourth down to win the CWAC championship on Nov. 2, 2019 in Grandview. 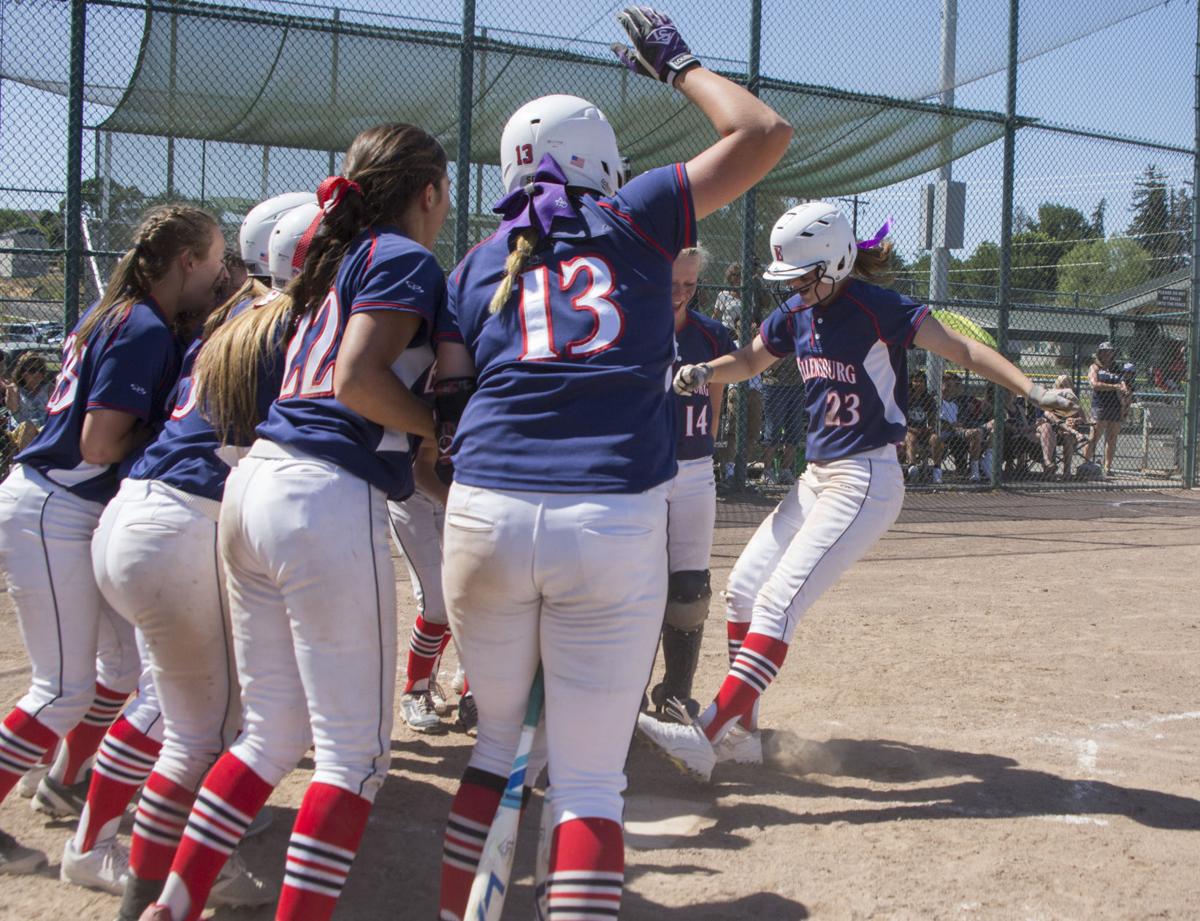 Ellensburg’s Kalli Fahey, right, jumps on home plate after hitting a two-run home run in the third inning of a 2017 Class 2A state tournament game against Selah at Carlon Park in Selah. 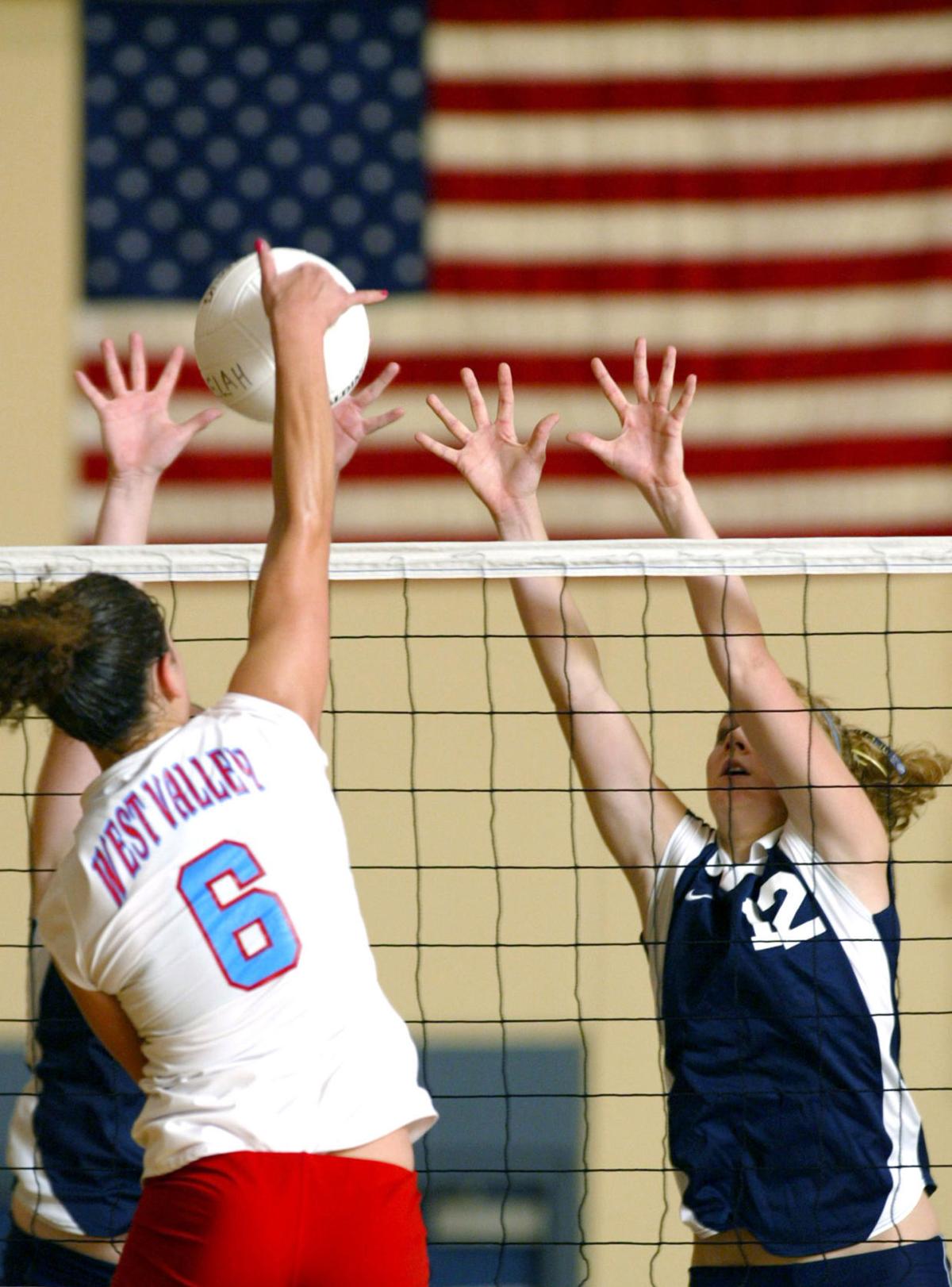 Selah’s McKenzie Headley, right, goes up for a block against West Valley’s Nicole Ljutic during a 2004 match.

The Prosser defense celebrates after stopping Ellensburg on fourth down to win the CWAC championship on Saturday, Nov. 2, 2019 in Grandview, Wash.

The Prosser defense celebrates after stopping Ellensburg on fourth down to win the CWAC championship on Nov. 2, 2019 in Grandview.

Ellensburg’s Kalli Fahey, right, jumps on home plate after hitting a two-run home run in the third inning of a 2017 Class 2A state tournament game against Selah at Carlon Park in Selah.

Selah’s McKenzie Headley, right, goes up for a block against West Valley’s Nicole Ljutic during a 2004 match.

Whether it’s the schools’ proximity, how long the teams have been playing, what’s at stake in those matchups or a combination of things, there are several rivalries that stand out in the Valley. Here are several of them, with a flame meter to rank their intensity, with five flames being the most intense.

Eisenhower hotlight: In 2007, they played two overtime games, including a 49-47 district victory by Ike that ended Davis' season and sent the Cadets on their way to a fourth-place trophy at state.

Davis hotlight: When the Pirates had their 25-0 state-championship season in 1965, four of those wins were over an 18-6 Eisenhower team, including a 76-66 regional win that put Davis in the final four.

Selah vs. Ellensburg on the diamond

Selah hotlight: In 2017, after they split their CWAC softball doubleheader with a pair of one-run games, Ellensburg survived a 4-3 duel in district and a week later faced the Vikings for a fourth time, winning the game for third place in the state tournament.

Ellensburg hotlight: In baseball, and also in 2017, they split their league doubleheader, Selah won the district title 4-3 and Ellensburg took the state opener 6-4, the catalyst for the Bulldogs' second state title and the end of the Vikings' season.

It's a fact: Selah and Ellensburg baseball have met in the CWAC district final for six straight years, the Vikings winning five straight, and they've met in the state playoffs four times since 2014.

Flame meter: Five (and a half).

Granger hotlight: In last season's SCAC West showdown, the Spartans trailed 24-9, surged ahead 32-24 and then fell behind 36-32 before senior Diego Isiordia's fall in the final match gave Granger a 38-36 victory.

Zillah hotlight: A year earlier, the Leopards trailed 31-18 with three matches left but junior heavyweight Cristobal Alejandre's triple-overtime 4-3 decision in the finale pulled out a 33-31 win and a league title.

It's a fact: Both programs can boast three Class 1A state team titles. Granger has produced 34 individual state champions, with at least one in each of the last 11 years, and Zillah has 27.

West Valley hotlight: Ever since joining the CBBN in 2014, the Rams have taken great pride in claiming the title of city champs by beating Eisenhower and Davis and have done so in each of the last three seasons.

Eisenhower hotlight: West Valley would've had a run of four straight years if not for Ike's 28-21 win over the Rams in 2016. The Cadets followed up with a 34-8 victory in their crosstown clash with Davis.

Davis hotlight: The first city title in 2014 was no contest as the Pirates humbled West Valley 55-0 and Eisenhower 56-6. Davis repeated the next season and returned to the state playoffs for the second straight year.

It's a fact: West Valley has averaged 52.5 points in six games against Davis and Ike over the last three seasons. If we're on schedule this fall, the first game would see West Valley vs. Davis on Oct. 2.

Selah hotlight: In 2016, Selah's boys survived the league dual, 27-28, and then later prevailed in the closest 2A regional race ever as four teams, including Ellensburg, were separated by just five points.

Ellensburg hotlight: Three years ago, Selah's girls won the league meet by a single point and claimed district and regional titles, but Ellensburg rose up at state and edged out the Vikings for the fourth-place trophy.

It's a fact: Both have won a girls state title in the last four years. In three of the last four years, the boys have finished side by side at state, including a one-point separation in 2017 followed by a three-point margin a year later.

Flame meter: Four (too nice to each other to be a five).

West Valley hotlight: Having dropped down to the CWAC in 2012, the Rams lost to Selah in four for the district title but a week later avenged the loss in the state semifinals — also in four — en route to the 2A title.

It's a fact: While they have drifted apart in school size, these are the Valley's premier programs with Selah amassing 25 state appearances with six titles and West Valley collecting 17 state trips with four titles.

East Valley hotlight: In 2018, Wapato claimed a pair of one-point league wins and then East Valley took the district title 49-47, putting them at 157-157 through three games. They clashed again at state and EV won to lock up a trophy.

Wapato hotlight: The Wolves' only league loss in 2017 was a 40-38 battle with East Valley in the second half of CWAC play, but Wapato responded with a big postseason run to place fourth at state.

It's a fact: Since 2013 they have met 19 times with East Valley holding a 10-9 edge. The irony of this past season, when they split their league games, is that East Valley played its home games at Wapato while its gym was being renovated.

Naches Valley hotlight: In 2001 when they won the 2A state title with a 22-0-1 record, the Rangers needed a shootout in the quarterfinals to outlast East Valley, which earned a 0-0 draw with NV in league play.

East Valley hotlight: Angie Ibach's goal early in the second half lifted the Red Devils to a 1-0 victory over NV in an all-CWAC showdown for the 2000 2A state championship. All four meetings that season were decided by one goal.

It's a fact: In the seven seasons between 1999 and 2005, when NV departed for the SCAC West, the Rangers were 72-9-3 in CWAC play while East Valley was 68-12-4. They combined for three state titles and three runner-up trophies.

Prosser hotlight: Down 21-0 early in the 1998 Mid-Valley League clash, quarterback Troy Thomas threw for 378 yards to rally the Mustangs for a 35-34 road victory that extended Prosser's state record for consecutive regular-season wins.

Ellensburg hotlight: In 2013, the Bulldogs raced out to a 38-7 halftime lead and eventually won a shootout 52-43 as Donny Ellersick threw five touchdown passes. This remains the most points scored on Prosser since 1951.

It's a fact: They have met in the state playoffs six times since 2001 and in the CWAC district final in each of the last two years. Prosser leads the all-time series 41-30-4.

Clash of the Canyon wrestling

Selah hotlight: The 2011 chase for the coveted rock appeared over when Ellensburg built a 31-12 lead, but on their home mat the Vikings rallied with four pins over the final five matches to snag a 36-34 victory.

Ellensburg hotlight: The Bulldogs pulled out a 39-37 thriller in 2017 to retain the trophy. Prior to Ellensburg's 47-28 victory in 2016, the winner alternated for six straight years.

It's a fact: Former longtime coach Jason Stevenson came up with the idea of a Canyon trophy and he was definitely qualified, having been the head coach at Ellensburg for 18 years after coaching the Vikings for six seasons.

Highland hotlight: In 1970, the Scotties lost three games to Naches Valley in the regular season but thumped the Rangers 79-59 in a winner-to-state, loser-out Valley A district game in Sunnyside.

Naches Valley hotlight: In 1987 when the Rangers won the Class A state title, they snapped Highland's 67-game home win streak and also beat the Scotties 59-50 in the state semifinals.

It's a fact: Highland amassed 10 of its 14 state trophies between 1980 and 1992 with its state championship in 1988 and three other appearances in the title game.

Flame meter: Five (in its day).

Zillah hotlight: In 2016 and 2018, the Leopards beat Goldendale on its home floor in SCAC West play and both times it was a five-set battle that saw Zillah recover quickly from a setback in the fourth set.

Goldendale hotlight: Just this past season, the Timberwolves rallied for five-set victories in both SCAC West matches, bested the Leopards 3-1 in the district semifinals and went on to earn a state trophy.

It's a fact: Zillah and Goldendale both have 12 state trophies, tied for third most among Valley schools. Five of their last eight league matches have gone five sets. Goldendale, however, is dropping down to 2B in the fall.