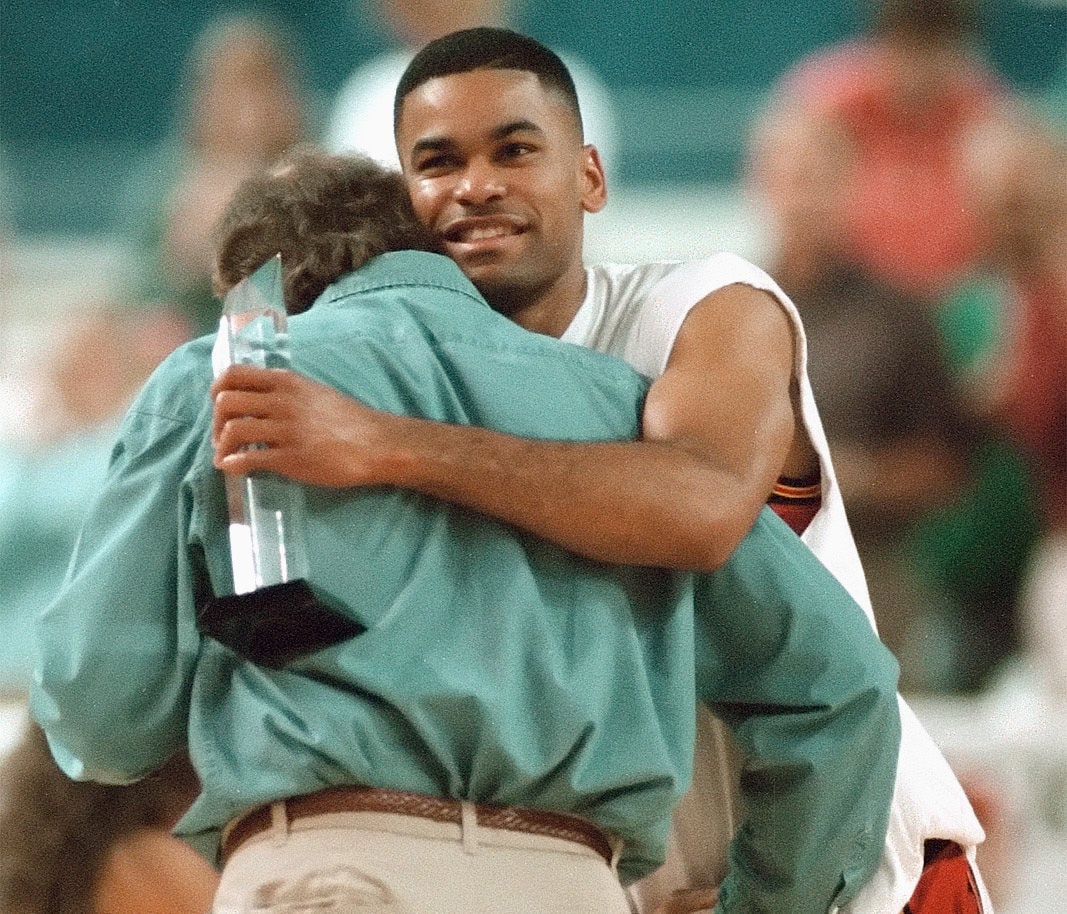 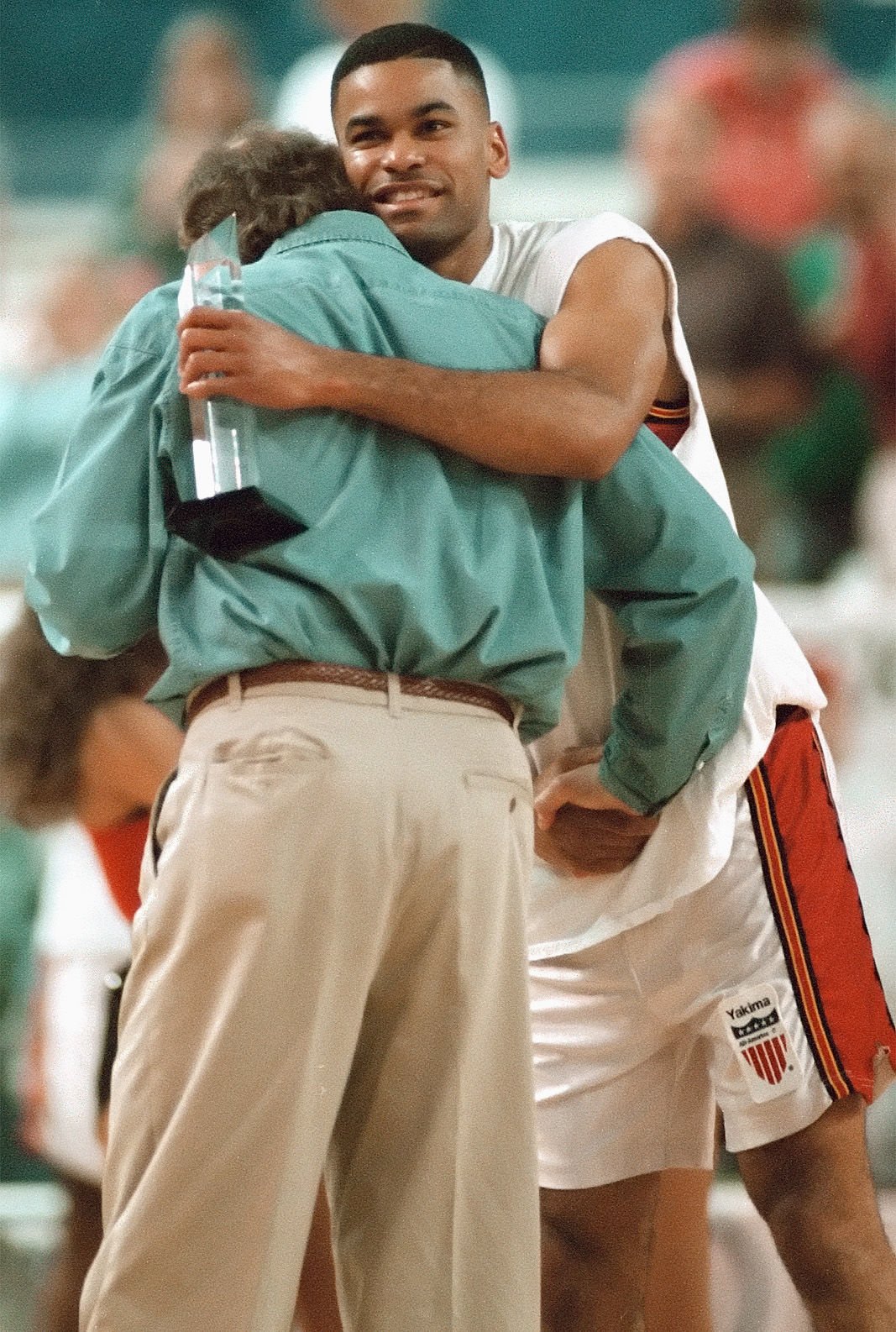 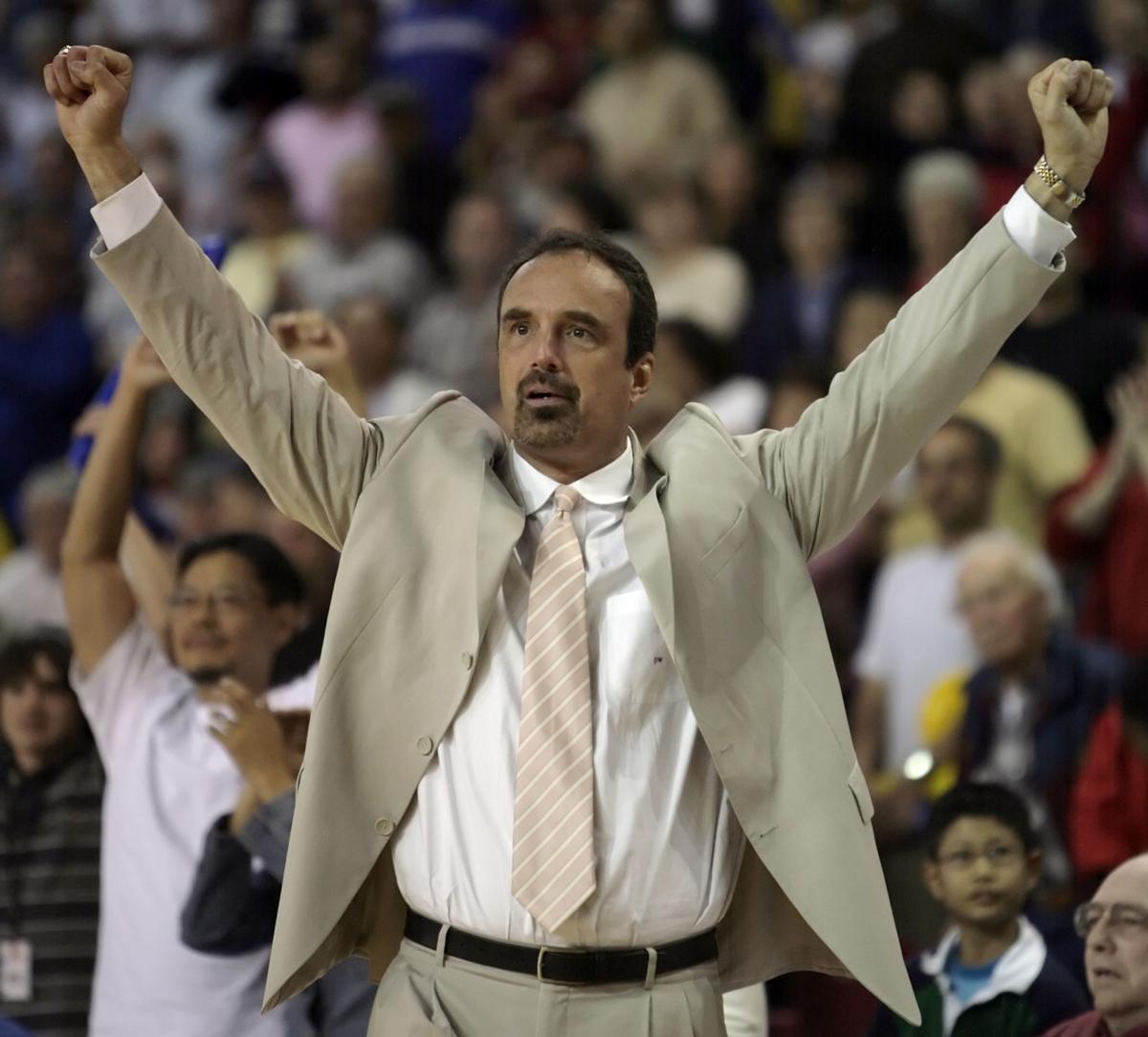 Sun Kings coach Paul Woolpert reacts in the final moments of Yakima’s victory in the 2007 CBA championship. Woolpert guided the Sun Kings to four of their six titles. 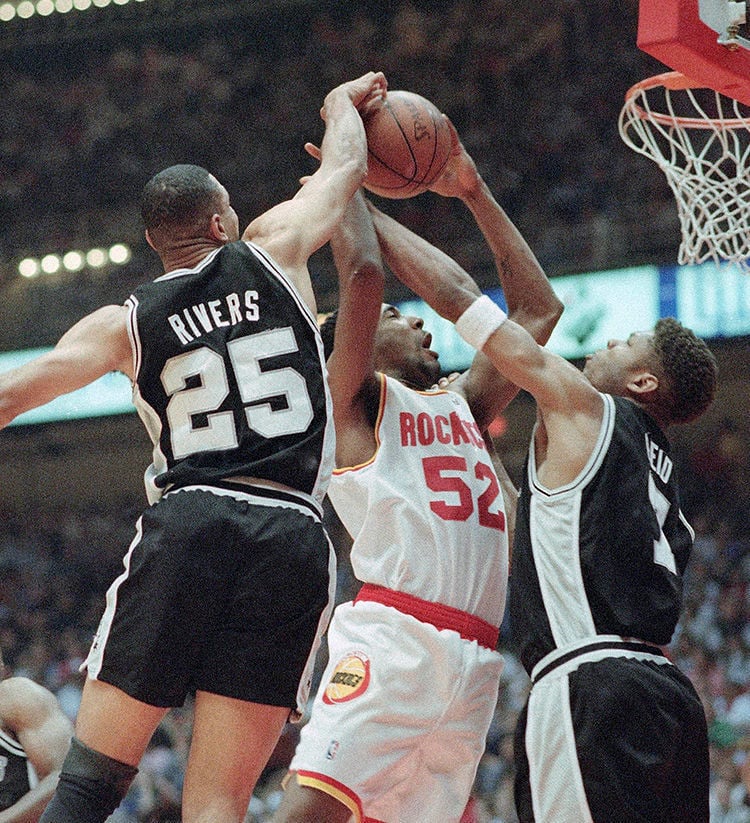 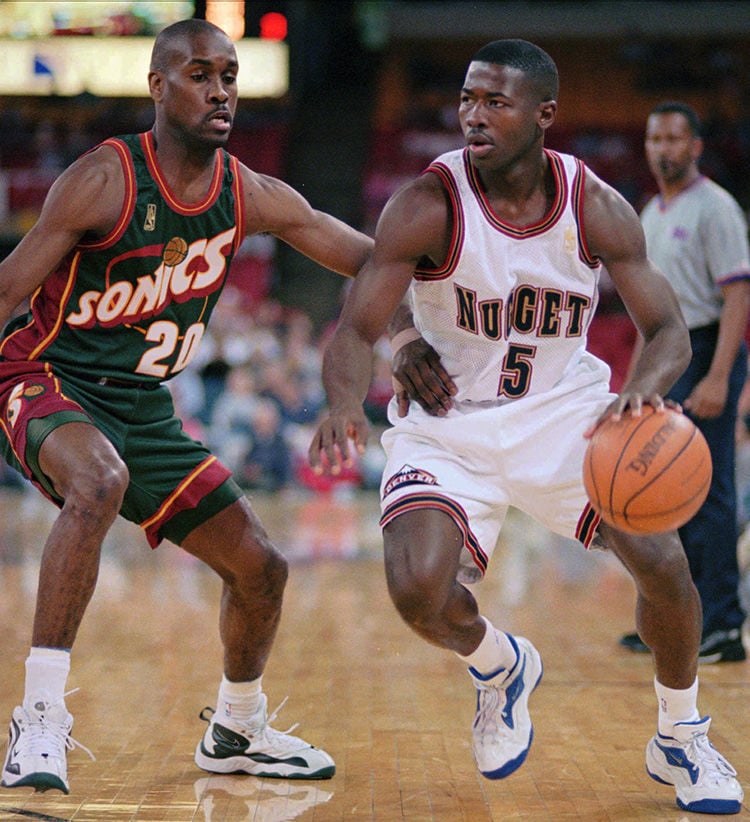 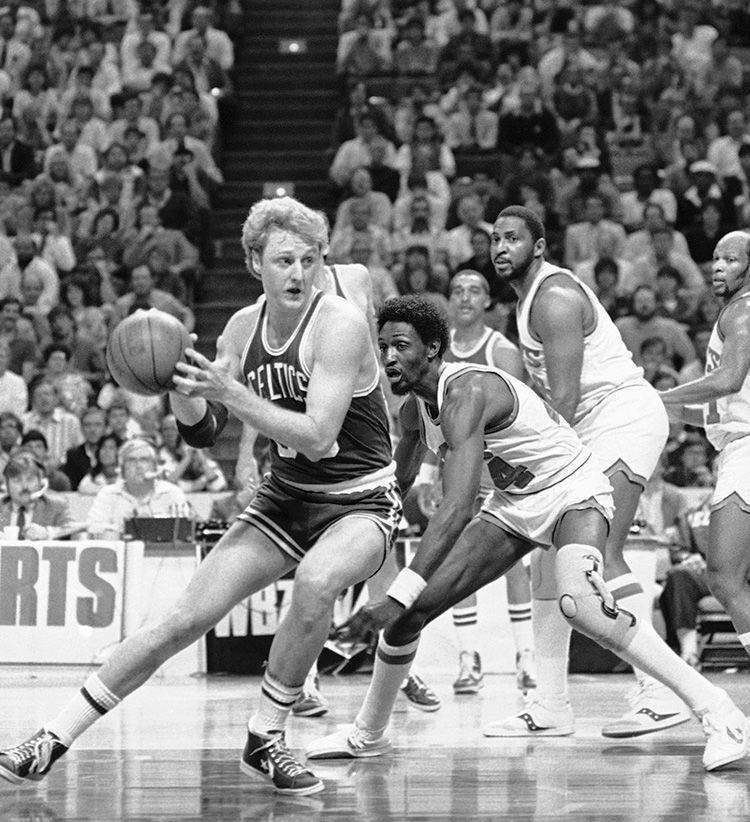 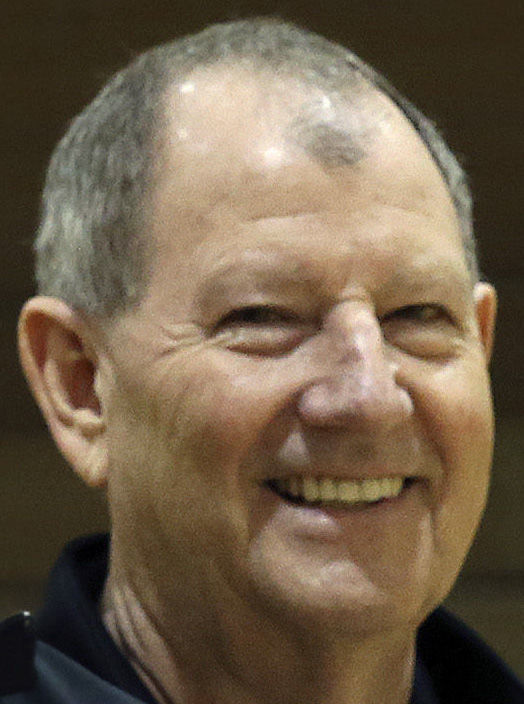 Sun Kings coach Paul Woolpert reacts in the final moments of Yakima’s victory in the 2007 CBA championship. Woolpert guided the Sun Kings to four of their six titles.

Prior to the 1994-95 season, getting shipped to Yakima meant something akin to a punishment for most Continental Basketball Association players and coaches.

That all changed dramatically thanks to a coaching change and a pair of key trades — plus another one an opponent reneged upon before the future league MVP could leave town. An abundance of NBA-level talent and a bond that Sun Kings Hall of Fame coach Paul Woolpert said remains remarkably strong 25 years later culminated with the franchise’s first title.

“That was easily one of the most talented teams in CBA history,” said Woolpert, an assistant for the 1994-95 team who has since win four more titles in Yakima as a head coach. “Almost everyone had NBA experience.”

Starting guard Larry Robinson recalled how upset he felt late in the ’93-94 season after learning perennial power Rapid City had traded him to the Sun Kings, who hadn’t been close to a winning record in their first four seasons since moving from Topeka, Kan. But he felt much better after talking to Mo McHone, a Yakima assistant at the time, and both of them could hardly believe it when the Sun Kings acquired Reggie Jordan and Chucky Brown from Grand Rapids for two players and a draft pick late in the ’93-94 season.

Brown needed to be part of the trade for reasons McHone wouldn’t understand until later, when he learned the powerful 6-foot-7 forward who played nearly 700 NBA games from 1989-2002 had drawn the ire of his coach by sitting out practices with a knee injury. But there was no question regarding the value of Jordan, a 26-year-old guard who played the last three months of the ’93-94 season with the Los Angeles Lakers.

“I believe Reggie Jordan was the best CBA player that ever played,” McHone said. “That trade right there turned the Yakima Sun Kings into a winning organization.”

More support arrived via the 1994 draft, when Yakima drafted Auburn forward Aaron Swinson No. 1 overall and selected a young guard from Houston named Anthony Goldwire six picks later. Every move underscored the eye for talent of McHone, who quickly rose from an accomplished assistant to CBA Coach of the Year.

Within a span of a few weeks in early 1994 McHone met his future wife, Valarie Sanders, and replaced head coach Herman Kull, who had just worked out a deal to trade another talented guard, Eldridge Recasner. When Grand Rapids reversed course, McHone called to tell a stunned Recasner he wouldn’t be going anywhere under the team’s new leadership, setting the stage for Yakima’s first playoff appearance in 1994.

“It was funny because I knew Herman didn’t like me,” said Recasner, a star at the University of Washington who is in the Husky Hall of Fame. “I was elated. I had a good relationship with Mo.”

Still, McHone didn’t fully understand the potential of his team until a trip just before Christmas to Rapid City, where the Sun Kings had never won. Young Thrillers coach Eric Musselman — now the head coach at Arkansas with eight years of NBA experience — always signed former NBA players, but that night Yakima rolled to a convincing 125-106 win behind a season-high 34 points by Chucky Brown.

Recasne remembers something set off 38-year-old NBA veteran Edgar Jones, and he responded by going for a season-high 17 points and three blocks. After the game Musselman told his former player, Robinson, the Sun Kings would capture a league title before Musselman himself.

“We blew them out of the water,” said Robinson, who lives in Louisiana and played 89 NBA games before his career ended. “That was some redemption for me as well.”

Almost nothing could slow the Sun Kings down, even with the ever-changing rosters of the CBA, the NBA’s top developmental league at the time. Recasner, Jordan and leading scorer Chucky Brown all took absences to join other teams, and each time other players stepped up to fill the void.

McHone said Dell Demps, who would go on to play for three NBA franchises before becoming the general manager of the New Orleans Pelicans, probably deserved more playing time and Goldwire often left the biggest impression on NBA scouts. But both came off the bench and Demps played the fewest minutes of any regulars on a 10-man roster Recasner said challenged each other on a daily basis.

“It was intense for everybody,” Recasner said. “I think the practices for us were better than the games.”

It came as a surprise to McHone and others when a seven-game losing streak followed a hand injury to starting center Curtis Kitchen, who averaged a somewhat pedestrian 3.8 points and 6.2 rebounds per game. The Sun Kings eventually found their footing even before Kitchen’s return but the season’s lone extended blip taught Yakima the importance of a player Woolpert called the league’s best defender.

Brown left for good at the end of January to join the eventual 1995 NBA champion Rockets, giving Swinson the chance to prove himself more than capable of taking over forward duties soon after arriving from Phoenix. The addition of Jordan in February ensured the Sun Kings wouldn’t miss a beat and McHone said strong leadership from Kevin Holland and Robinson maintained the Sun Kings’ winning mindset even when Recasner, who shot a sizzling 57% from the field and 51% from 3-point range through February, missed eight games in March to make his long-awaited NBA debut in Denver.

“Kevin was always in a good mood,” McHone said. “The guy was always upbeat, smiling, just a joy to be around. When you’ve got good players and they have that kind of attitude it makes coaching so much fun.”

Yakima finished the season as well as it started, winning eight of the last nine games.

The Sun Kings posted a league-best 36-20 record and earned the No. 1 overall seed by picking up the most points, which were awarded for winning quarters (1 point) as well as games (2). Recasner returned for the last three games of the season and won the league’s MVP award, but he came off the bench in 12 of 14 playoff games and Swinson had emerged as a top offensive threat.

“He was such a monster down on the block,” McHone said. “He could score against anybody.”

Tri-City proved the depth of the mid-90s CBA by taking Yakima to overtime twice in a second-round series, but the Sun Kings prevailed both times and advanced in four games. Another 3-1 series win against Oklahoma City wasn’t nearly as close as Yakima earned a spot in the finals against Pittsburgh.

The Sun Kings notched a pair of wins at home, but the Piranhas responded to even the series and looked ready to move ahead on their home court after Swinson was ejected following an altercation early in Game 5. Instead, Yakima gutted out a 102-99 win thanks to 17 points from Goldwire and 18 from Robinson, who joined Holland to confront Swanson in his hotel room afterwards.

“We knew he could play so much better than what he was doing and he was getting down on himself,” Robinson said. “We’re glad we did it, because the next game, he just dominated.”

The 6-foot-5 forward who Woolpert said learned his physical style from Suns forward Charles Barkley exploded for 26 points and 12 rebounds in front of an energetic home crowd, earning himself the finals MVP award. Recasner scored 18 points and knocked down a go-ahead 15-foot jumper with 20 seconds left, then came away with the ball as the clock ran out on a 94-92 win and he sprinted over to deliver the prize to his wife.

It still rests in his glass box at Recasner’s house in Bellevue, reminding him of one of the fondest memories of a career that would include 293 more NBA games after that CBA championship. He now is an analyst on basketball broadcasts by the Pac-12 Network.

Many other players went on to earn significant money in the NBA or overseas, and even athletic trainer Geoff Clark reached the next level in Portland, where he’s spent 22 years, including the last 10 as the Blazers’ head athletic trainer.

McHone believes the championship allowed him to reach new heights in his coaching career, most notably opportunities to coach for Team USA and another CBA title the following season after he accepted a significant pay raise to go to Sioux Falls. Jordan followed McHone and most of his teammates left Yakima as well with both Recasner and Brown breaking into the Rockets’ starting lineup during the 1995-96 season.

Woolpert stayed on McHone’s staff before returning to Yakima in 1998, eventually bringing back two members of the 1995 championship team to help maintain the franchise’s winning culture. Holland played on the Sun Kings’ 2000 championship team and Goldwire won a pair of titles, earning the league’s MVP award in 2006.

Woolpert and longtime director of basketball operations Rich Austin, who was named CBA general manager of the year in 2006, said the team that turned Yakima into one of the CBA’s top destinations will always hold a special place in their memories. Most of them met for a Zoom call to reminisce last month and Austin’s working to organize a reunion sometime this year.

“I’m on a text chain with these guys and some days you may get 70 texts back and forth,” Austin said. “They’re always talking to each other. They’re always telling jokes.”

Greg Dennis, Ron Huery, Scooter Berry, Robert Shannon and Eric Johnson all played fewer than 20 games and were not on the playoff roster.