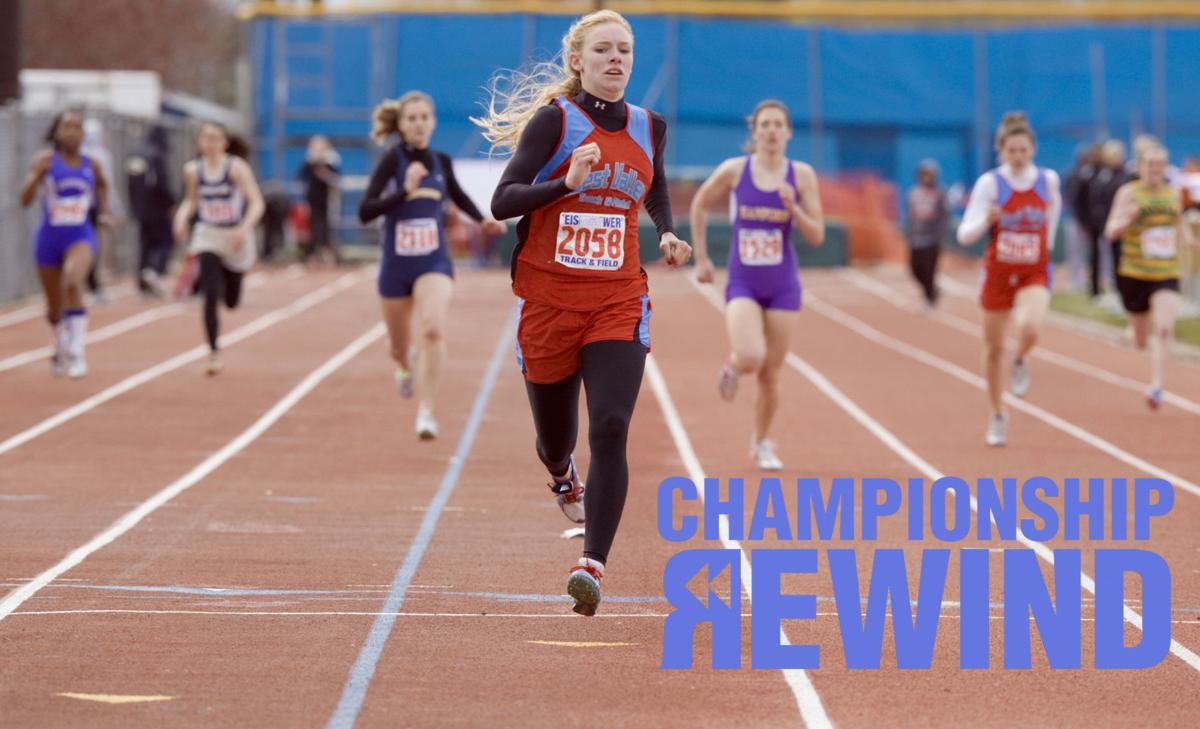 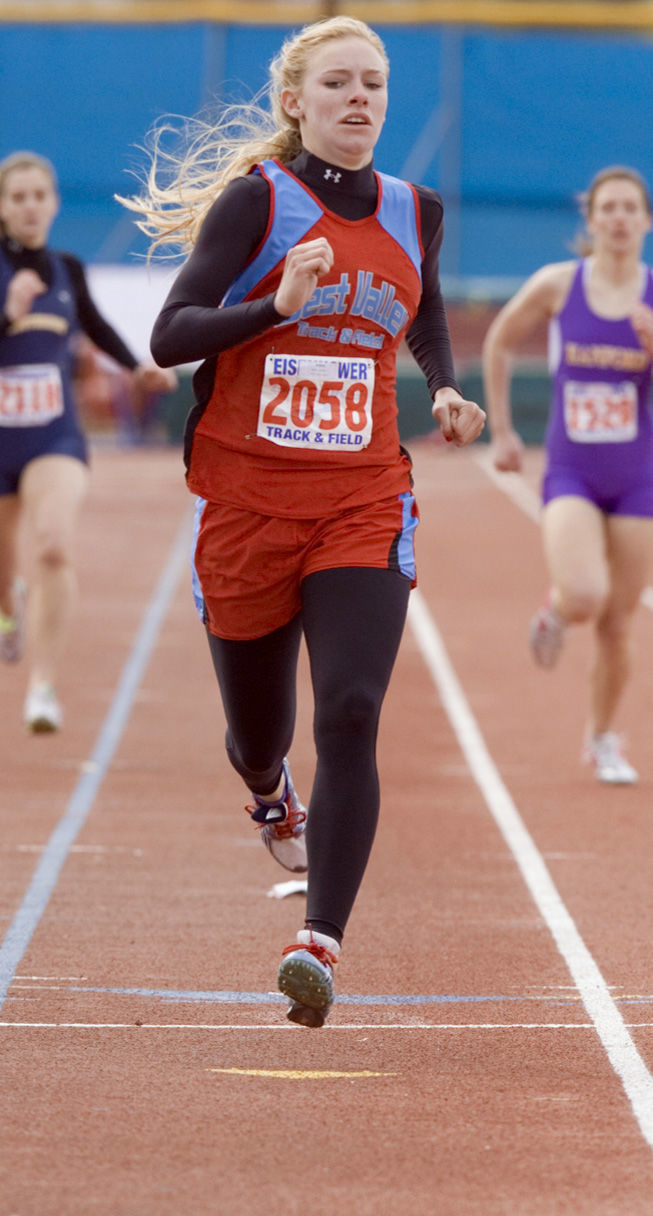 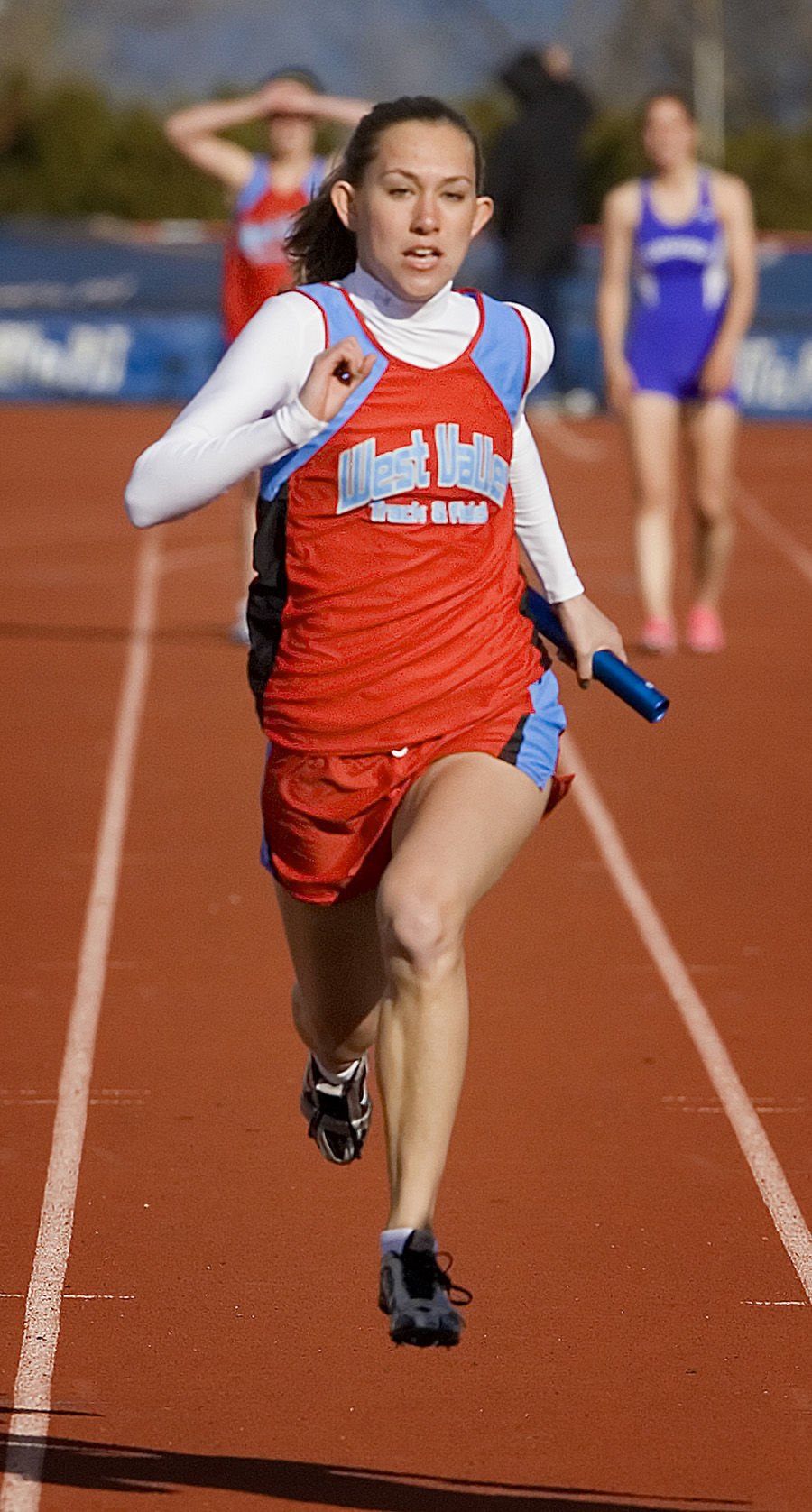 West Valley’s Chantel Jaeger runs the anchor leg of a 400-meter relay during a 2010 meet.

West Valley’s Chantel Jaeger runs the anchor leg of a 400-meter relay during a 2010 meet.

This is a Valley record that’s likely chiseled in stone, with four girls averaging 57.8 seconds per 400 in an epic 1,600-meter relay 10 years ago. Chantel Jaeger remains the best sprinter the Valley has ever produced, and two of her teammates here were soccer standouts in college. Haley Curtis ranks among Utah Valley’s top career scorers with 18 goals, and relay anchor Lindsay Burns, a defender who logged 6,470 minutes over 79 games, was just last week named to Baylor’s all-decade team for 2010-2019.

TACOMA — Their long, twisting journey through the day was filled with every emotion possible, including an oddly contagious frustration, but when they came back together for one final performance there was only one word to describe it.

West Valley’s Haley Curtis, Chantel Jaeger, Chelsea Nell and Lindsay Burns not only tore up their 4x400 meet record from Thursday’s prelims but won Saturday’s Class 3A state final in a stunning 3 minutes, 51.45 seconds — the fastest in any classification in 32 years and the state’s fastest relay ever at the metric distance.

There was nothing but hugs and joy and gleeful amazement for the foursome, which heard its record time about the same moment the sun finally came out during the three-day 4A, 3A and 2A track and field championships at Mount Tahoma High School.

At the end of a day that started with the disappointment of not winning the 4x200, and then shaking off some individual setbacks, the Rams still came away with a fourth-place trophy in a battle for hardware that saw the top six teams separated by only eight points.

“We really needed to end the day this way,” said Burns, the freshman who competed in four events Saturday and finished with a dazzling 55.3 anchor on the 4x400. “We wanted to maybe break our record, but the main thing was to run to win. We did that, ran soooo fast and the sun came out — it was perfect.”

That was around 6 p.m. At just after 10 a.m. the feeling was a bit different.

In the 4x200 final, which was considered the table-setter for a possible run at the team title, Curtis, Nell, Burns and Jaeger were unbeaten all season and turned in the best prelim time by two seconds. But Franklin Pierce, with two-time 100 and 200 state champ Germe Poston storming from behind on the anchor, stole the race in 1:43.69. Jaeger outleaned Camas’ anchor for second as both teams timed 1:43.72 in a blanket finish.

“We were all so bummed because we thought that was gold for us,” Curtis said. “It was hard to take that disappointment.”

For a while it showed.

In the individual events that followed, Curtis couldn’t get loose in the 300 hurdles and placed eighth, Jaeger ran fifth in the 100 and Burns struggled with her steps in the long jump and settled for sixth. All came to Tacoma seeded first or second.

“It took some time to shake off that 800 relay,” noted head coach Jamie Nordstrom. “There were some disappointments but they got it turned around with some great races.”

Burns changed the momentum just minutes after finishing the long jump. In the 400 final she finished second to Glacier Peak senior Stephanie Cummings but clocked 56.32, a career best and the state’s fifth-fastest ever for a ninth-grader.

“Having to do the 400 right after the long jump was probably good for me,” she said. “There wasn’t much time to worry about what went wrong with my steps or be upset about it. I just tried to stay composed and run a good race. It’s a new PR and that’s what I wanted.”

Jaeger then did the exact same thing — execute a composed, smart race — and finished second in the 200 behind the Arizona-bound Poston. A junior, Jaeger improved one place in both sprints from last year.

“The 200 is really what I was focusing on, that’s my better event,” she said. “Germe ran a great race and good for her, she’s a senior. I’m happy with how I did.”

The tide had clearly turned for the Rams and they really turned it loose in the 4x400.

Curtis subbed in on the first leg for junior Ashley Packard, who ran in Thursday’s prelim, and contributed a solid leadoff with Jaeger settling in just behind Camas at the second baton exchange.

Nell sped around Camas briefly on the third leg but the stubborn Papermakers fought back into the lead at the final exchange. Burns was five meters down when she took over but not for long as a bold dash down the backstretch earned her the lead. It was the kind of move that would make most nervous, but Burns did not wilt down the stretch.

“I wanted to find the right place to jump her and still have enough for the end,” Burns said. “At the end of the backstretch felt like the right place. I just gave it everything I had.”

The remarkable duel pulled Camas under West Valley’s two-day-old meet record as well as Megan Kelley, who was fourth in the open 400, brought her team home in 3:53.23.

“We all pulled together to finish with a victory,” said Curtis, who concluded her long and successful multi-sport career at West Valley and will head to Utah Valley University to play soccer. “The 300 (hurdles) were really disappointing. I mean, I was very happy to be in the top eight but eighth isn’t what I expected. For this relay I just thought, I’m a senior, I’ll never do this again and it’s my last race — just leave it all out there.”

The only times in state history considered better than West Valley’s 3:51.45 were recorded as mile relays in 1978 by Sammamish (3:48.3 converted to metric) and Issaquah (3:49.8). Sammamish led the nation that year.

Glacier Peak and Columbia River tied for the state team title with 49 points. Camas was third with 43 and West Valley shared fourth with Auburn Mountainview with 42.