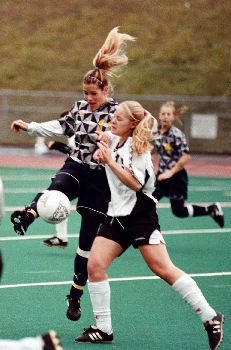 It’s rare enough for the Valley to capture two state titles on the same day, but West Valley and Naches Valley capped undefeated seasons on the same field at the girls soccer state finals in 2001. East Valley earned the first local state championship in girls soccer just one year earlier.

FEDERAL WAY — Just a freshman in high school, Hannah King is the Queen of Naches today.

The tiny ninth-grader made the most of her first trip to the Class 2A state soccer championship with the Rangers’ only goal in a 1-0 defeat of Meridian at chilly Federal Way Stadium on Saturday.

The win completes a near perfect 22-0-1 season for Naches Valley and comes just one year after a heartbreaking 1-0 loss to CWAC rival East Valley in the title game.

King poked the ball past stunned Trojan goalkeeper Rebecca Noel off a slick centering pass from forward Kellee Keniston that was deflected by Katie Drollinger in the 21st minute.

Drollinger said she got the ball and flicked it backward with her right foot, knowing King was behind her. The only person more surprised by the ball’s location than King was Noel.

“I looked down and then all of a sudden, here’s the ball,” an excited, animated King explained after the game. “And after I kicked the ball I thought, “Wow, it went in.’

“It was only my second goal of the season, and I’m glad it was today.”

King said that while she was in middle school last year she watched the team play often, but didn’t make the trip to the state finals. She said the team, even the freshmen, felt compelled to make the most of Saturday, knowing there might not be another chance.

Ranger coach Harvey Robicheau was all smiles as his players hoisted the big trophy afterwards. He loses just four seniors from the title team, but admits he doesn’t want to wait another 64 years for a chance to win a second title.

“I hope we get another chance like this,” he said. “Nobody gives it to you.”

The Rangers mother-in-law offense — constant pressure and harassment — kept Noel hopping for the first 40 minutes. Naches had three shots on goal in the first five minutes. Katie Drollinger had another excellent chance with a point blank attempt at the 33-minute mark that Noel snared.

The difference was the Rangers’ team speed. Time and again the quick forwards had the Trojan defenders back-pedaling. There were second-half scoring chances, but more importantly, it allowed more precious time to run off the clock.

Naches’ stingy defense, led by junior sweeper Beth Drollinger, made King’s goal stand up for 59 minutes for the Rangers’ first state championship. Team speed was a factor there as well as the Rangers consistently outran the Trojan forwards to long passes and booted them out of bounds.

The older Drollinger, who had both Ranger goals in the semifinal win over Cashmere, consistently cleared the ball from the Ranger defensive zone in the first half with booming 35- and 40-yard kicks to midfield.

That forced the Trojans to continually reset at midfield and try to get into a position to score.

“I was more comfortable today than I was yesterday with a 2-0 lead,” Robicheau said. “We played on our toes, and they stayed intense.”

Meridian had three excellent chances in the first five minutes of the second half, but couldn’t convert.

Katie Johnson sailed a 20-yard shot without much velocity at Naches goalie Danielle Bernhardt in the 44th minute, followed by a solo chance by Autumn Covert that required a sliding save by Bernhardt. A crossing pass on the ensuing re-start sailed high across the goal mouth, but there were no Trojan forwards in the area to make an attempt.