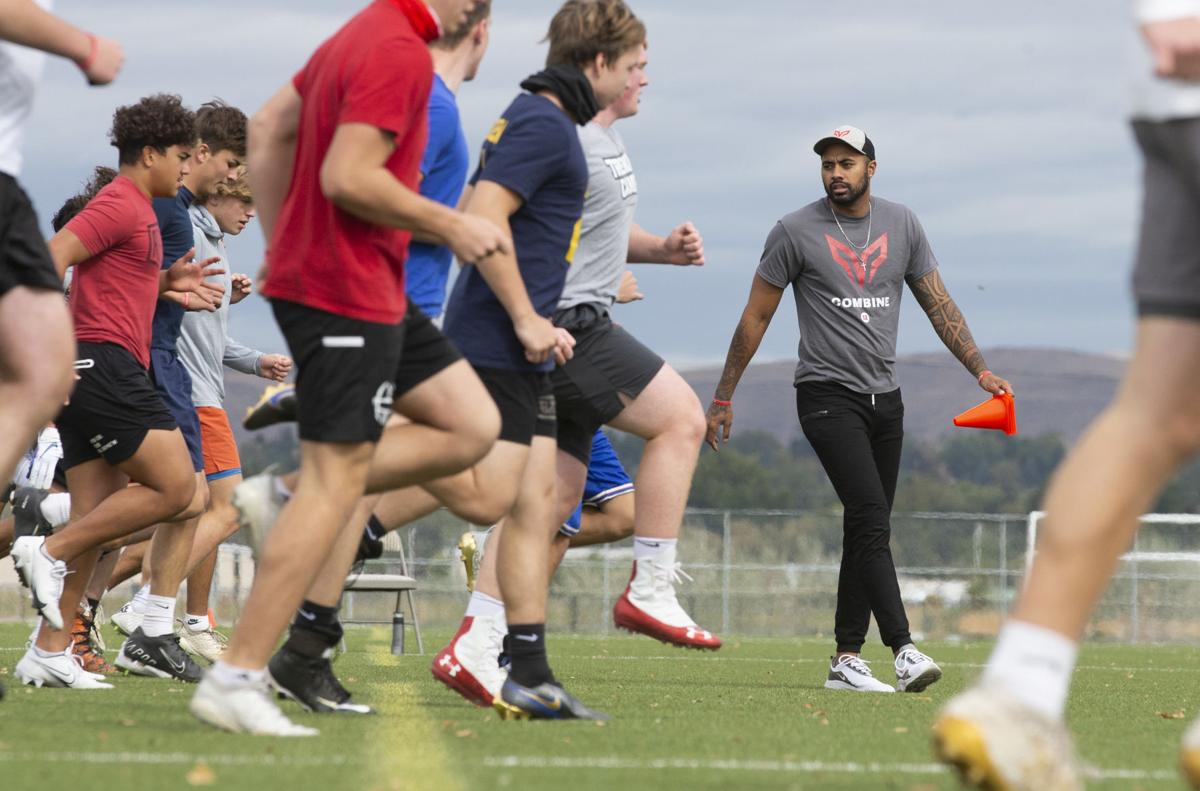 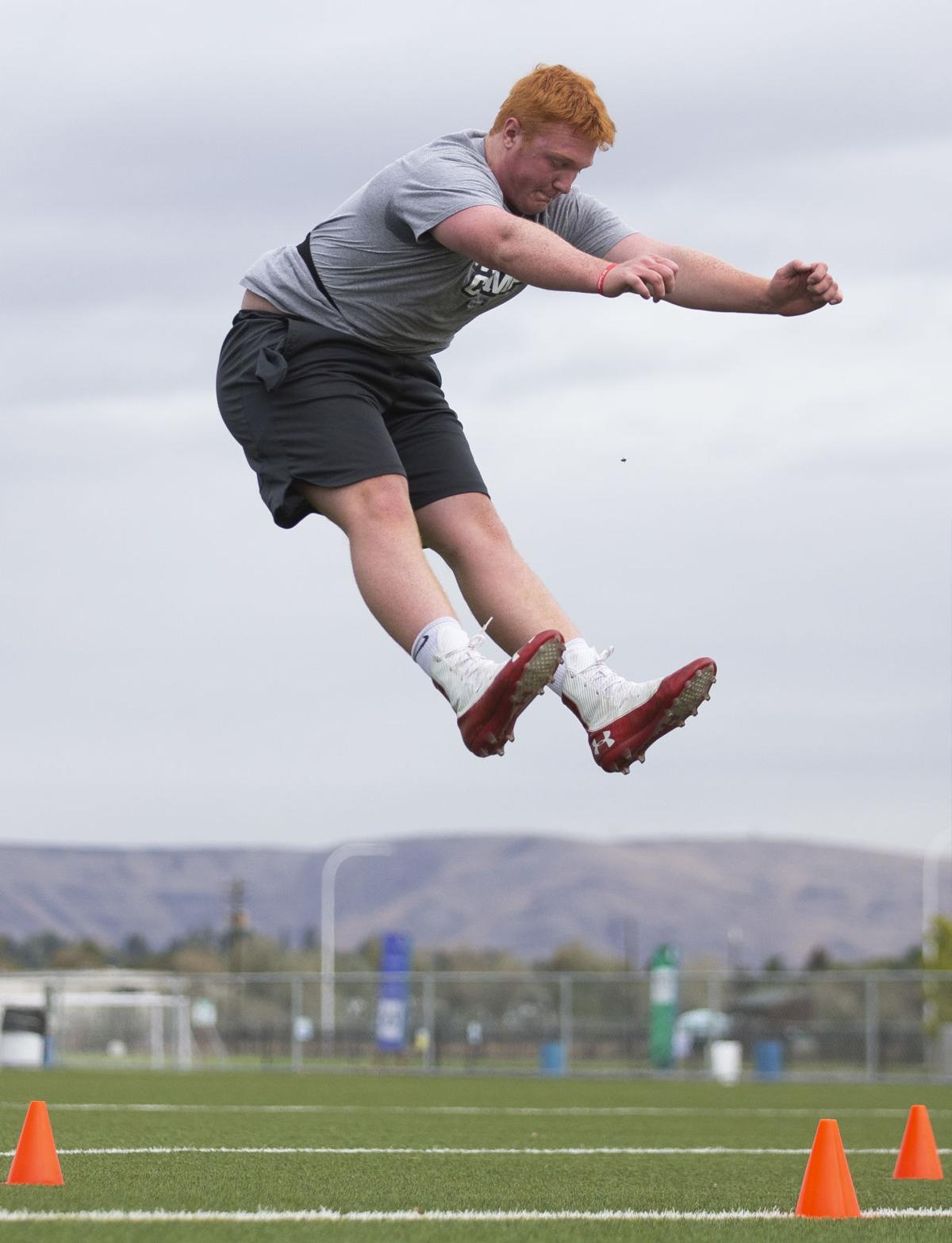 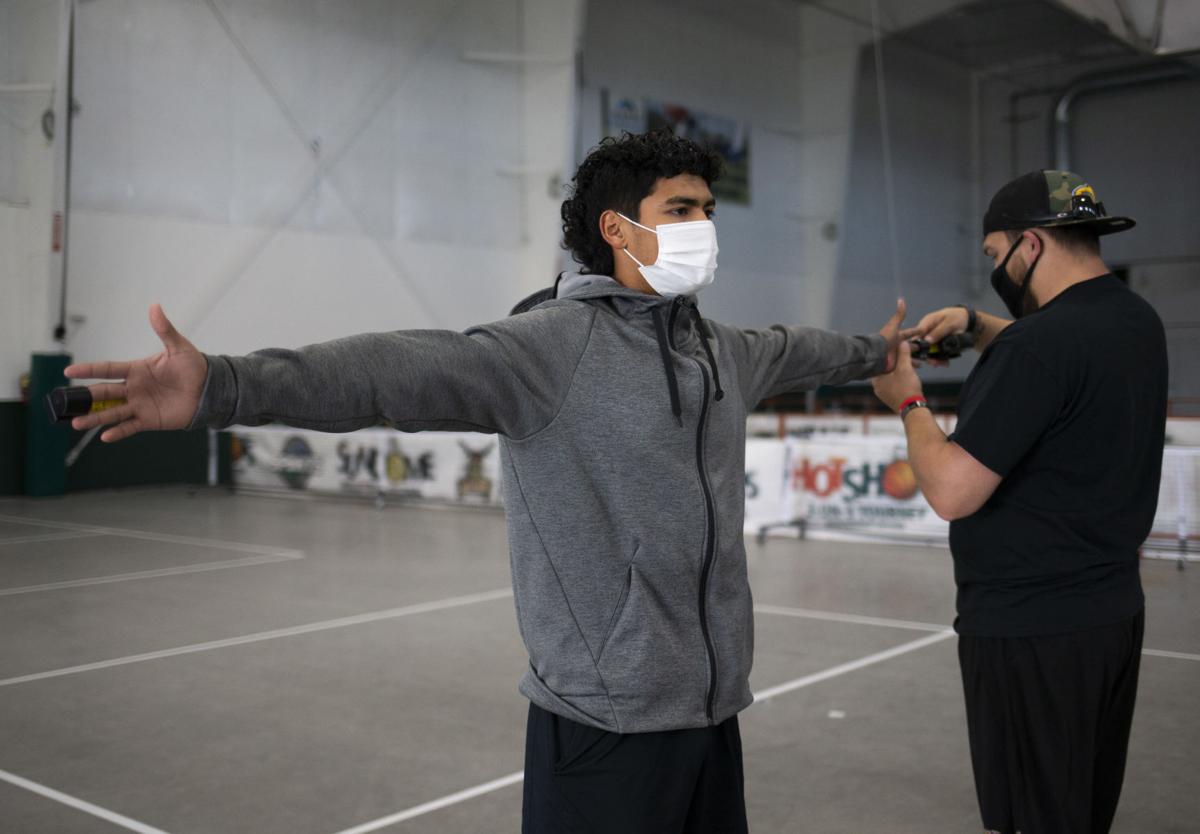 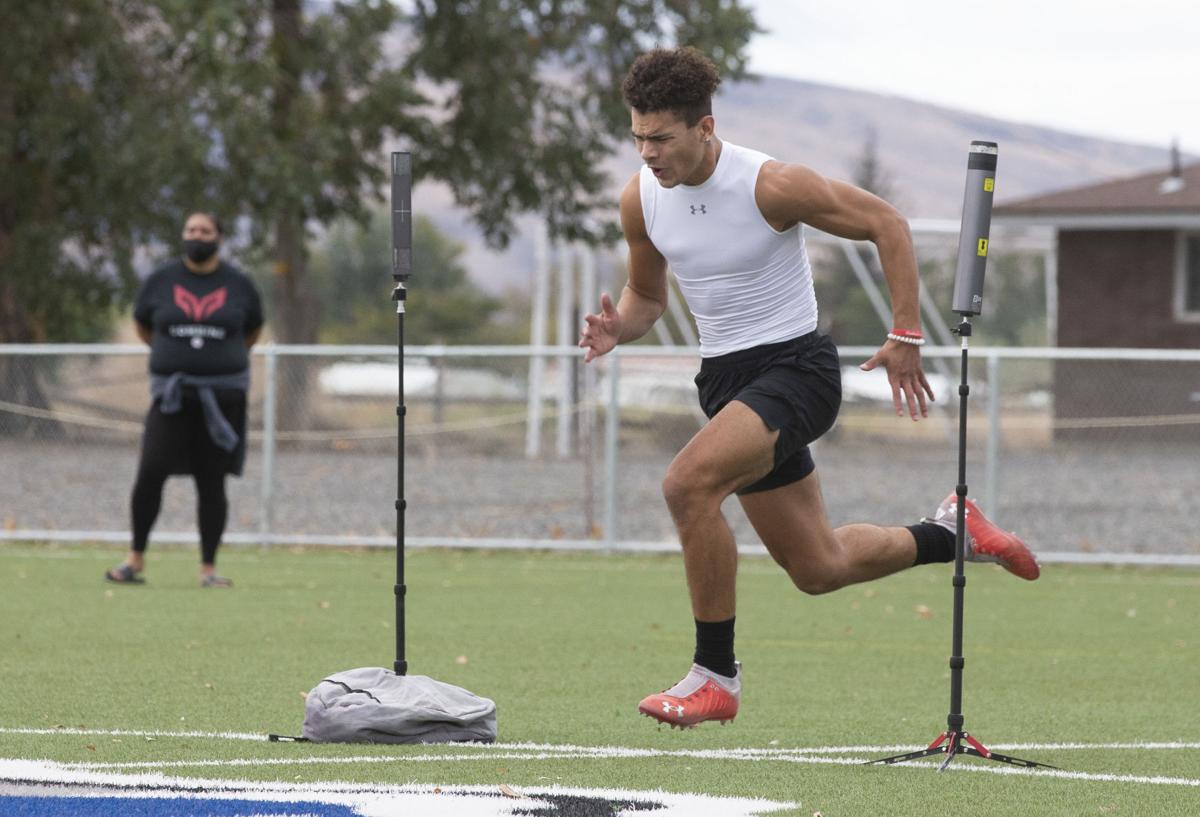 Santiam Christian's Marcus Fullbright passes through the 10-yard split sensors while testing in the 40-yard dash at the MVP Performance Center combine for high school football players on Saturday, Sept. 26, 2020 at SOZO Sports Complex in Yakima, Wash. Fullbright was one of several athletes from Oregon to attend the event. 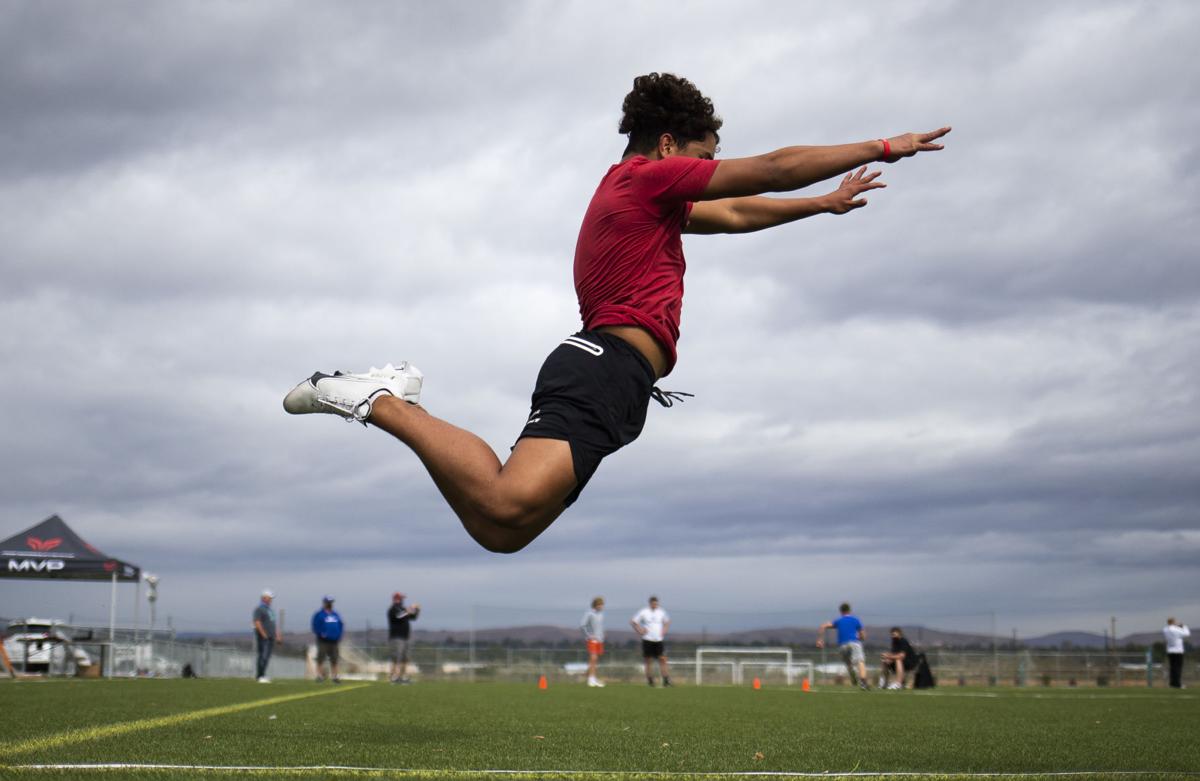 Lakeridge High School's Ethan Biondine takes his second turn in the broad jump at the MVP Performance Center combine for high school football players on Saturday, Sept. 26, 2020 at SOZO Sports Complex in Yakima, Wash. Biondine was one of several athletes from Oregon to show up to the event.

Santiam Christian's Marcus Fullbright passes through the 10-yard split sensors while testing in the 40-yard dash at the MVP Performance Center combine for high school football players on Saturday, Sept. 26, 2020 at SOZO Sports Complex in Yakima, Wash. Fullbright was one of several athletes from Oregon to attend the event.

Lakeridge High School's Ethan Biondine takes his second turn in the broad jump at the MVP Performance Center combine for high school football players on Saturday, Sept. 26, 2020 at SOZO Sports Complex in Yakima, Wash. Biondine was one of several athletes from Oregon to show up to the event.

A glimpse of something like high school football finally returned to Yakima County Saturday at the Sozo Sports Complex.

Two athletes briefly tossed an actual football on the turf field to warm up, but the real action followed in the form of drills focusing on speed, strength and agility. Nearly 20 players, including West Valley’s JP Leahy and Adam Chandler, as well as Zillah’s Juan Avalos, showed up to try to enhance their recruiting profiles at a combine hosted by MVP Performance Center.

“Since I can’t have game film right now I usually film myself working out, doing lifts and stuff,” Leahy said. “I’m really hoping this combine can give me some film to show some coaches.”

The senior defensive end put on 40 pounds since the end of last season to grow to 6-foot-3, 260 pounds, capable of benching 355 pounds and squatting 500. He still felt stronger and faster than last season after putting up some impressive numbers on Saturday, including a 1.8-second 10-yard split in the 40-yard-dash and a nine foot, two inches broad jump.

247Sports national recruiting editor Brandon Huffman said events like the combine offer a huge opportunity for players to obtain verified results and measurements in a year without any competitive football or even a track season in several states, including Washington and Oregon. The NCAA suspended in-person recruiting through the rest of 2020, so Huffman said college coaches must rely heavily on film to fill out their 2021 recruiting classes.

“It’s never been more valuable than now,” Huffman said. “You’ve got guys that sometimes go a little bit above and beyond.”

Most home workouts can’t compare to the laser-time 40-yard-dash offered by MVP Performance Center at one of the combine’s six stations. Athletes could also attempt the standing broad jump, a vertical jump test, two different running drills to measure agility, and the Power Ball, where players throw a six-pound ball as far as they can while on their knees.

No one came close to matching the 4.37 40 run by senior wide receiver Darrius Clemons at the MVP combine in Eugene, Ore., that drew 350 high school athletes last July. MVP president Lavasier Tuinei said multiple players from that event earned Division I scholarships thanks to their performances, and Clemons, who was already a four-star recruit with several Division I options, picked up additional offers from the likes of Notre Dame, Washington and UCLA.

His quarterback at Westview High in Portland, Brayden Libby, drove all the way to Yakima to try and improve on his 40 time. A few other Oregon players, including Santiam Christian senior running back Marcus Fullbright, also made the long trip to try to increase their odds of getting attention from college coaches.

“You gotta do what you gotta do since it’s covid and stuff,” said Fullbright, who holds a Division I offer from Valparaiso. “I’m just grateful that people are out here putting on the combines and things like that.”

Several parents brought their cameras and stood in designated areas to film the various activities on the field. Parents and coaches wore masks, while players took off their face coverings during warmups together as a group and then separated into groups of three or four as they rotated to the different stations.

Some Oregon players, including Fullbright and Banks High School quarterback, sophomore Christian Lyda, said they’ve recently been able to start some limited practices with their teams. Although Ellensburg football and most other Bulldog teams will practice during the WIAA’s special offseason period starting Monday, that won’t be allowed in Yakima County under the modified Phase 1 guidelines.

Instead, players like Avalos, a senior cornerback and wide receiver, know they’ll need to keep working out on their own, sending film to coaches and preparing for the 2021 spring season. The combine also offered a chance for younger players like Chandler, a sophomore wide receiver and free safety at West Valley, to find out where they stand during a difficult time.

“(I’m) just getting out, getting numbers (to) show colleges, getting better every day,” Chandler said. “I’ve FBU (Football University) Seattle, been to all the camps that I can (get to).”

Sozo’s facility made a positive first impression on Tuinei, who plans to come back and turn the combine into an annual event.