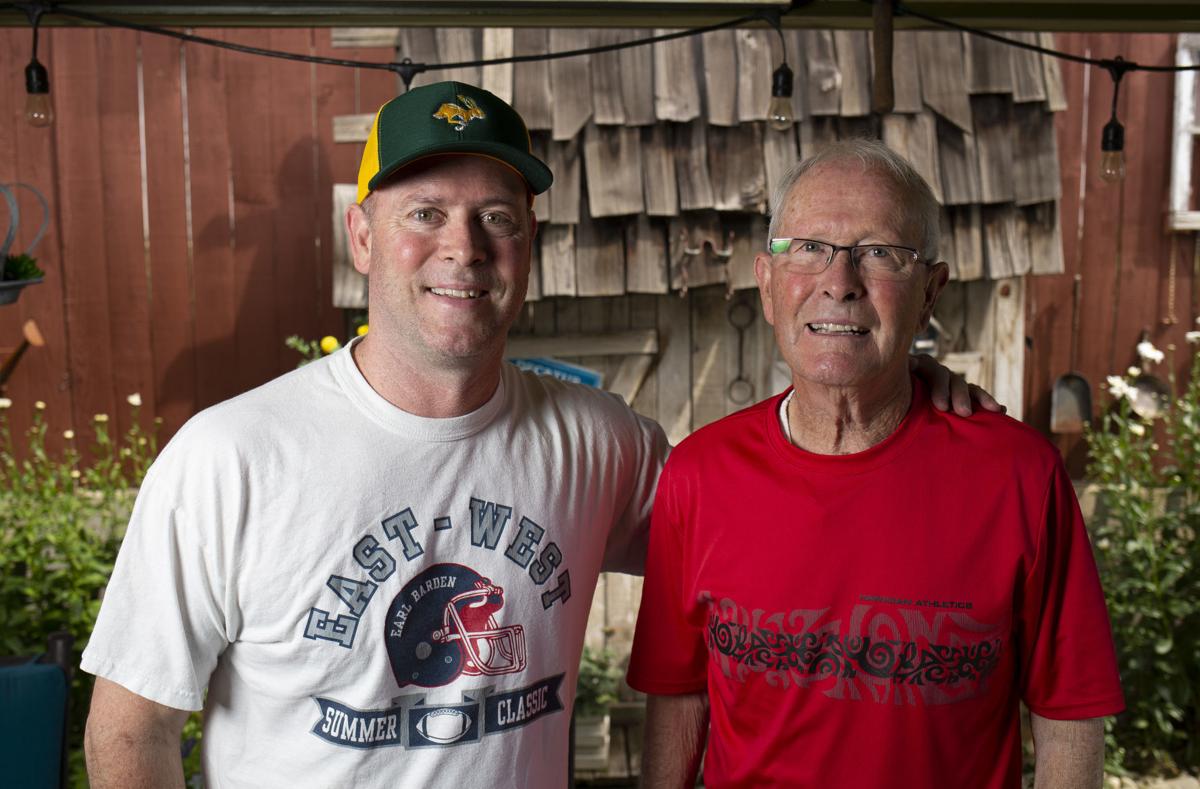 Greg McMillan, left, and his father Jack McMillan pose for a portrait Friday in Yakima. Greg is the new head football coach for Quincy. Jack, who coached 19 years at Cascade in Leavenworth and nine years at La Salle, is a member of the Washington football coaches Hall of Fame. 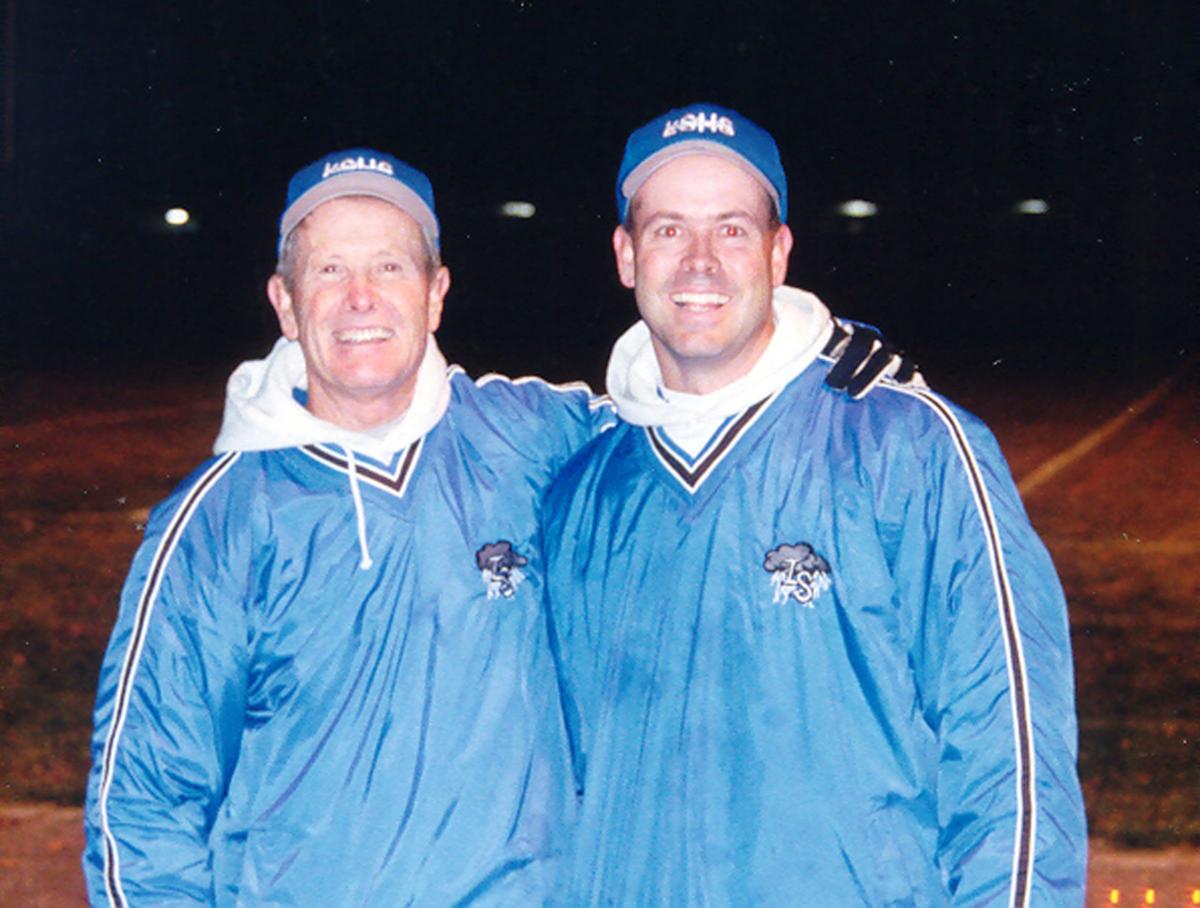 A photo of Jack McMillan, left, and his son Greg McMillan, right, when Jack was head coach at La Salle and Greg was an assistant during the 2006 season.

Greg McMillan, left, and his father Jack McMillan pose for a portrait Friday in Yakima. Greg is the new head football coach for Quincy. Jack, who coached 19 years at Cascade in Leavenworth and nine years at La Salle, is a member of the Washington football coaches Hall of Fame.

A photo of Jack McMillan, left, and his son Greg McMillan, right, when Jack was head coach at La Salle and Greg was an assistant during the 2006 season.

Greg McMillan was entering the fourth decade of a coaching career that, in some ways, was easing into twilight. After 18 years as an assistant, he couldn’t help but think the prospect of being a head football coach again might have passed him by.

Whenever thoughts like these had come up before, anything in the realm of self-doubt, he instinctively suppressed and overpowered them. A life spent pushing back against the effects of cerebral palsy built that kind of resolve.

So it’s not surprising that he flipped the twilight into a spotlight, accepting the head job at Quincy High School earlier this month.

While fully equipped with experience and knowledge, he’s nevertheless anxious.

You know what helps that? Having a father close by who’s not only a Hall of Fame football coach but also a pillar in his son’s ability to overcome personal challenges and focus on helping others.

“I was talking with a friend the other day who said, ‘I know you’ll do well at Quincy because you’ve got the best mentor a person could have,’” Greg said. “I know that’s true and I’m so grateful for it. We’ve been spending quite a bit of time together lately and he’s full of advice, which I always soak up.”

Four to five times a week Greg drives from his home in Selah to visit his parents in west Yakima. It’s not just a visit, it’s a workout. At age 80, Jack enjoys the exercise while Greg, who has taught in the Yakima School District for the last 18 years, is trying to fend off the sedentary side-effects of a quarantined life. Having endured several surgeries in the last 10 years, Greg needs to be as active as possible even though that’s increasingly difficult to do, especially in a stay-at-home world.

So Greg and Jack head to the garage to work with bands and pulleys and, of course, to talk a little football.

“I’m excited for Greg, our whole family is,” Jack said. “What I told him is to be prepared and show the kids you care, show them they can trust in you to do things the right way. It all starts with that.”

Greg understands the value of those words well, having been so closely connected to Jack’s coaching career, which concluded in 2012 after nine years at La Salle. Greg was the offensive coordinator for the Lightning during most of that time.

“Dad’s always been a big character guy because that’s what you are,” said Greg, who taught at Eisenhower for the last 14 years and was most recently an assistant coach at Selah before taking a season off to watch his youngest son, Gabe, play his final season. “His teams played with sportsmanship and class, and as a man of his generation integrity is at the core of that. He also taught me to give every ounce of energy you have.”

Greg is forced to measure that effort more closely than most. The malady he deals with from his lower back and hips down to his feet has made standing or walking for extended periods too difficult and it has curtailed the coaching he enjoys in other sports. A crucial event in sustaining his passion to coach football came when the communities he touches — both in education and athletics — helped raised funds for a customized mobility chair with a long battery life and ideal design for handling uneven ground.

So, after sitting out last fall to watch his son play, Greg was more than eager to get back on the field. When the opening at Quincy came up, he felt ready for his first head job since a five-year run at Brewster ended in 2001.

“Physically, this is totally good for me,” he said. “It’s given me a purpose again. With the surgeries, they’ve fixed what they can fix. I’ve always been someone who believes you do what you have to do and move forward. This opportunity is just what I needed.”

Quincy, which has a new high school and state-of-the-art football stadium, is headed down from the Class 2A CWAC and into its former home in the 1A Caribou Trial League. Greg has started the process of building a staff with a projected season opener at Okanogan on Sept. 4 followed by the Jackrabbits’ home opener against rival Ephrata.

If the CTL proceeds as scheduled this fall, Oct. 9 would be a special date for Greg with a trip to play Cascade at venerable Peshastin Stadium, where Jack coached for 19 years. Up until 2006, the state record for the longest game was a seven-overtime marathon between Cascade and Quincy (it was one of Jack’s 234 wins).

“There are so many positive connections to this job,” Greg said. He and his wife Marnie have four kids, Gabe being the last out the door. “As empty-nesters the timing is perfect, and I’ve got a brother in Ephrata. We have friends all over up there, and it’s a chance for our family to be even closer.”

Indeed, Jack and his wife Sharon put their house up for sale this week and plan to move to Ephrata, where they were married in 1961.

“We started talking about this when Greg applied at Quincy,” Jack said. “Ephrata is where it all started for us, and now we have a chance to be close to all the grandkids. We’ll miss Yakima, but this is wonderful for our family.”

Greg has for years been heavily involved in the Earl Barden Classic all-star football game at East Valley and would’ve spent this past week preparing for Saturday’s 26th edition had it not been canceled by the pandemic. Missing that annual connection to 70 of the best small-school seniors in the state was yet another coronavirus disappointment, but a timely spirit-lifter arrived the next day.

Father’s Day always has good timing, but this one in particular.

“We have a lot to celebrate,” Greg said. “Football is our bond and there are so many things I cherish with that. We have enjoyed so much together, and now we have this ahead of us. I couldn’t be more excited about it.”