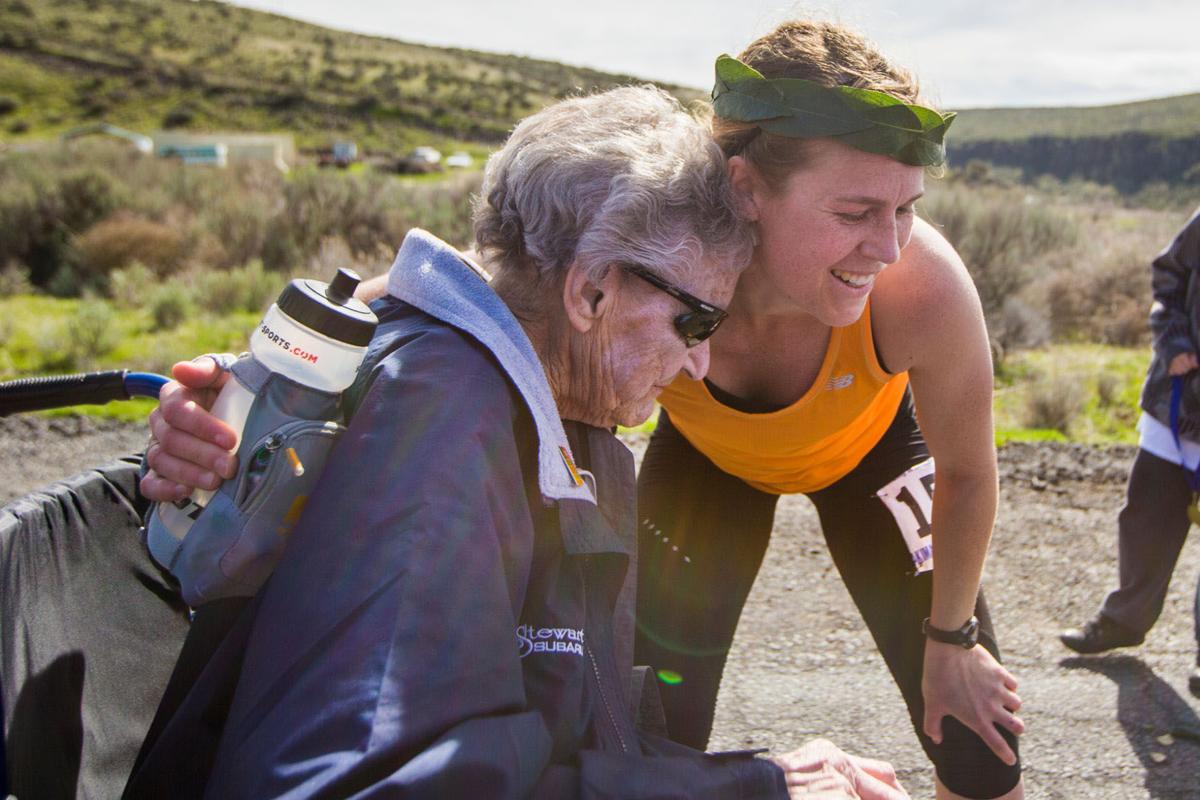 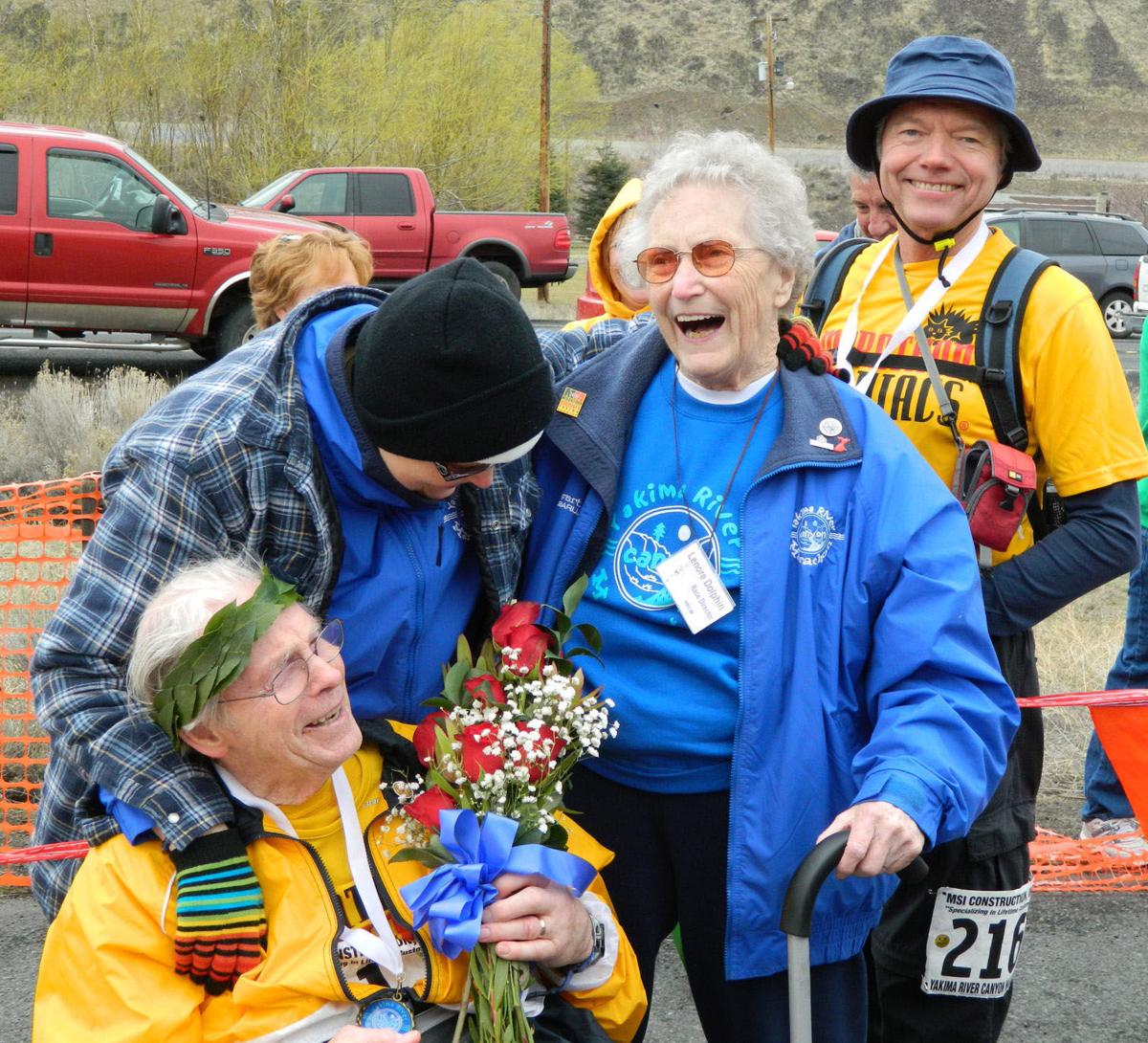 Bob and Lenore Dolphin getting a hug from Bob's daughter, Ellen Boyd, at the finish of Bob's 500th marathon — the Yakima Canyon Marathon in 2012. Jeff Hagen, in the background, walked the entire race with Bob. (Photo by Joyce Hagen)

Bob and Lenore Dolphin getting a hug from Bob's daughter, Ellen Boyd, at the finish of Bob's 500th marathon — the Yakima Canyon Marathon in 2012. Jeff Hagen, in the background, walked the entire race with Bob. (Photo by Joyce Hagen)

YAKIMA, Wash. —Over the past 19 years, the Yakima River Canyon Marathon has drawn runners from throughout the United States and even beyond.

Sure, they enjoyed the race’s unique scenery, but for many Yakima became a destination for a different reason. They knew co-race director Lenore Dolphin, with help from her beloved husband Bob, wanted to see them and would show appreciation for them like no other race director.

“Nobody gives the personal attention to runners like she did,” said Jeff Hagen, an avid ultrarunner who’s been to hundreds of races all over the world. “She’d be at the finish line giving everyone a hug, giving every woman a rose.”

From the pre-race pasta feed the night before to the post-race potato feed for those willing to stay, Lenore Dolphin worked hard to ensure every last detail gave runners the best possible experience. Ron Fowler, one of 13 runners to complete all 19 Yakima marathons, said the Dolphins always supported every runner and went to seminars put on by other race directors to find ways to improve their race.

The unprecedented COVID-19 outbreak forced the cancellation of this year’s race, originally scheduled for April 4 and organized in part by Lenore, despite failing health. She died March 12 at the age of 90, and new race director Frank Purdy said the 2021 marathon, scheduled for March 27, will honor Lenore’s legacy.

Her impact in the running community stretched well beyond Yakima, thanks to her tireless efforts to support Bob’s nonstop running schedule. Lenore’s daughter, Jan Stensland, said the two met at a dance in Ellensburg at Lenore’s class reunion, and she quickly developed a boundless enthusiasm for running.

“They celebrated their 25th wedding anniversary last November,” Stensland said. “They just had so much fun traveling to marathons and getting to know people.”

Lenore quickly became as much of a fixture at races as her husband, who ran 502 marathons between 1981 and 2014. She enjoyed volunteering so much she eventually went with Bob to a race director training to learn how to put on a race of their own.

So when Purdy, Hagen, Tony Sagare and other members of The Hardcore Runners Club of Central Washington wanted to put together a marathon, the Dolphins emerged as obvious candidates to lead the race. Stensland said Lenore utilized the organizational skills she learned from her mother to put together an event Purdy said featured a plethora of personal touches.

“She pretty much did the race,” Purdy said. “We took on some extra duties, but even up to this year she was pretty intent on being in charge. She likes to do things her way.”

Hagen said Lenore “in many ways was the Yakima River Canyon Marathon” and she created “books of handwritten notes” on how everything must be done, finding unique ways to recognize first-time marathoners, old friends, inspirational runners, and many more. Sagare, a longtime friend of the Dolphins who often ran with Bob, noted that Lenore always made sure other volunteers did their job.

“You didn’t mess around,” Sagare said. “If you said I’m going to take an aid station, you sure as heck better be there.”

Those organizational skills will surely help the Yakima River Canyon Marathon live on, and Lenore started planning for a succession plan several years ago. While Purdy and others took on more responsibilities with the race, Lenore and Bob also helped Fowler become the director of the 100 Marathon Club, which the Dolphins founded.

The connections created through the Yakima River Canyon and other races left an indelible mark on the life of Lenore and others, including her daughter. Stensland recalled how before a business trip to Sao Paulo, Brazil, her mother insisted she get in touch with a running friend there, and runners from England and the Czech Republic sent emails and personal gifts over the last few months.

Boston Marathon director Dave McGillivray is a close personal friend and Lenore also stayed in touch with Kathrine Switzer, who became the first woman to ever officially complete the Boston Marathon in 1967. She was asked to speak at prerace dinner for the Yakima marathon and enjoyed it so much she came back a second time.

Stensland said the family asks that donations in lieu of flowers go to Schweitzer’s charity, 261 Fearless, which strives to empower women through running. Plans to livestream a funeral service at Shaw and Sons on April 2 are expected to be finalized at a later date.