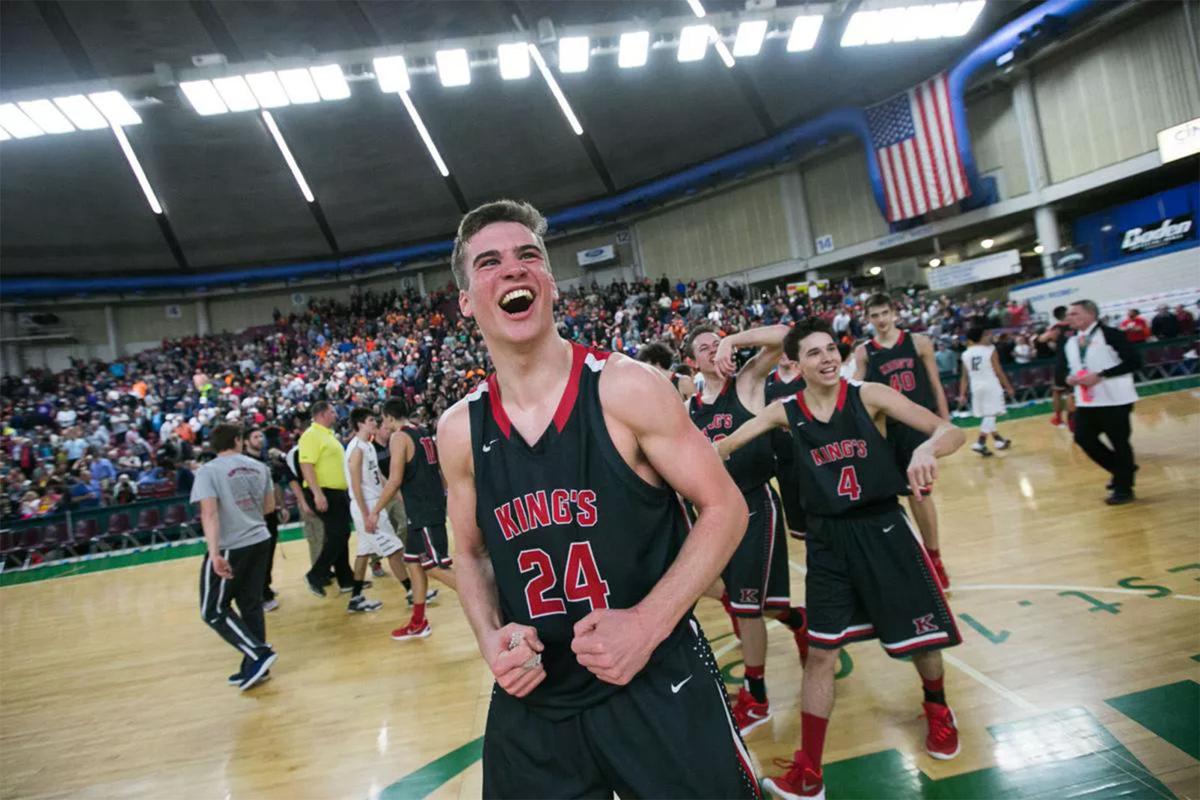 Corey Kispert celebrates after King’s defeated Zillah in a 2016 Class 1A state quarterfinal in the SunDome. 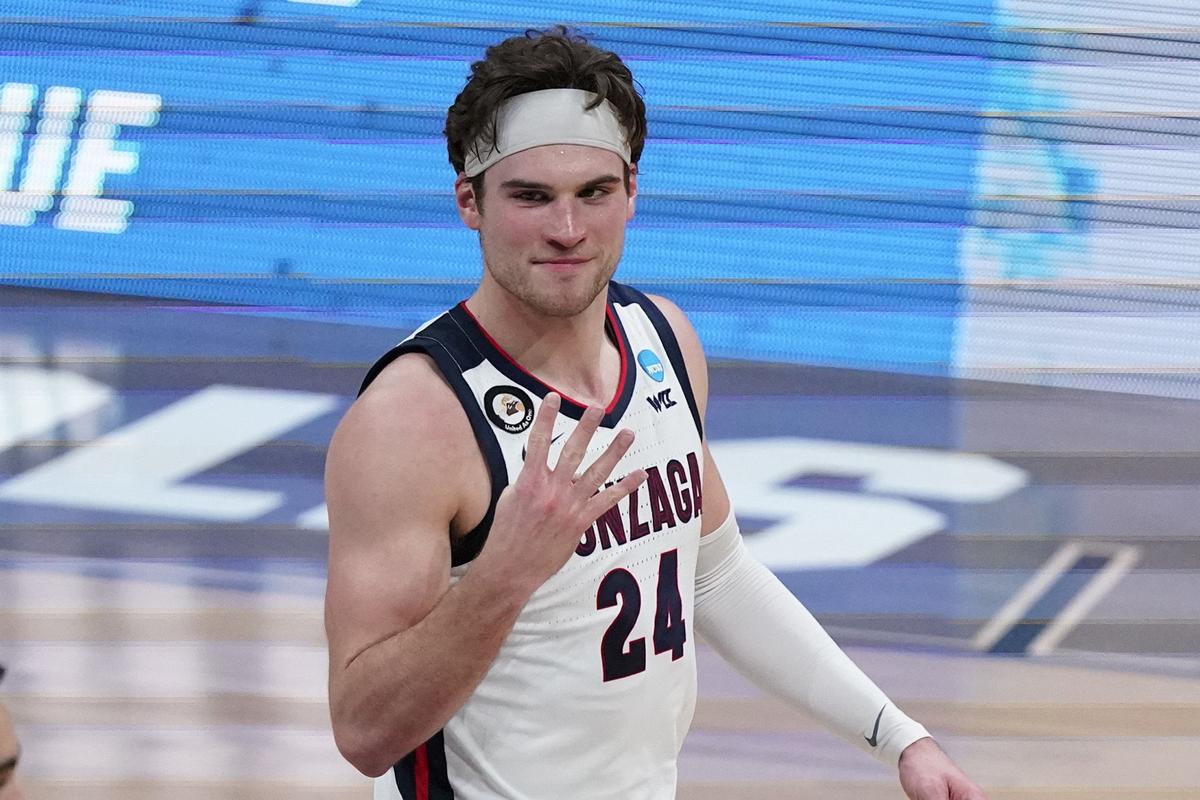 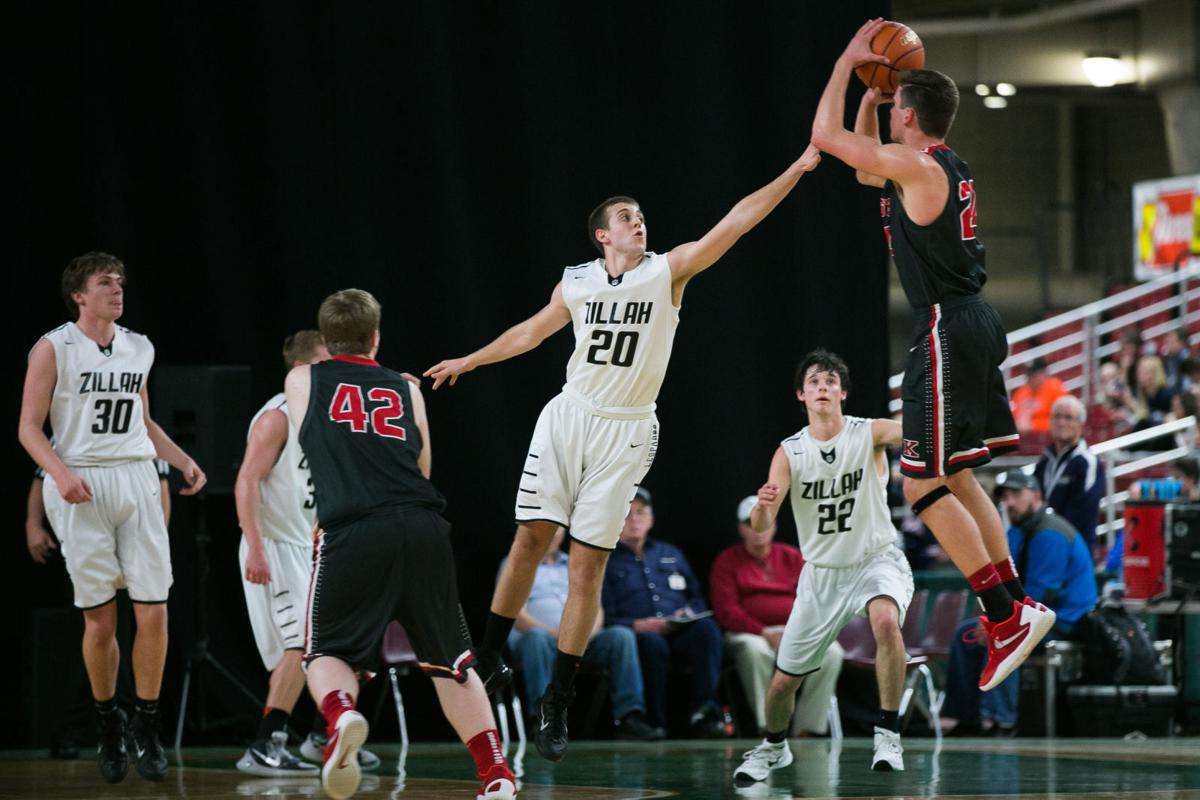 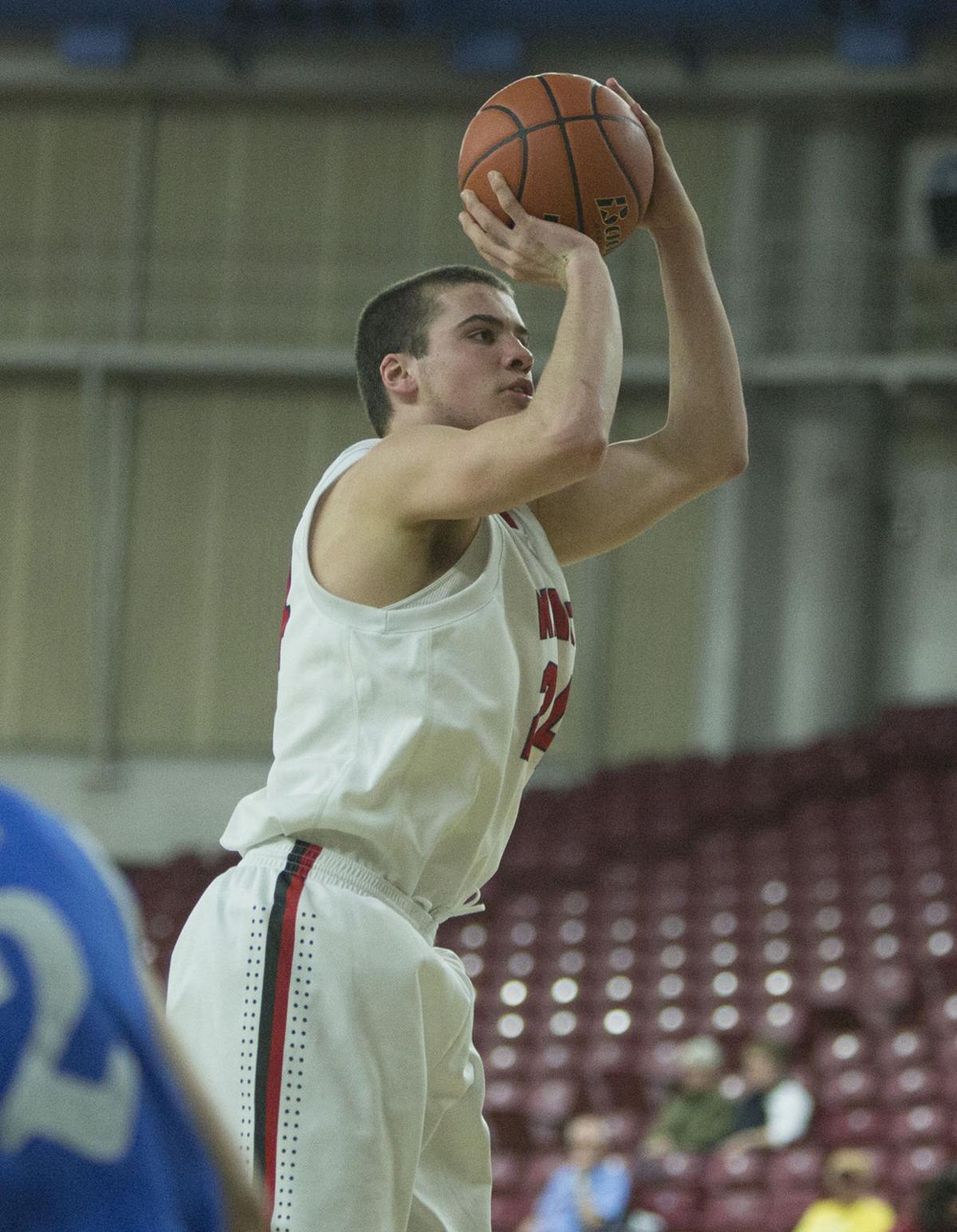 King’s Corey Kispert takes a jump shot during the Knights’ quarterfinal game against La Salle in the 2015 Class 1A boys state basketball tournament in the SunDome. (Madison McCord, Yakima Herald-Republic)

Gonzaga forward Corey Kispert reacts to hitting a basket against Norfolk State during the first half of a men's college basketball game in the first round of the NCAA tournament at Bankers Life Fieldhouse in Indianapolis, Saturday, March 20, 2021. (AP Photo/Paul Sancya)

Corey Kispert celebrates after King’s defeated Zillah in a 2016 Class 1A state quarterfinal in the SunDome.

King’s Corey Kispert takes a jump shot during the Knights’ quarterfinal game against La Salle in the 2015 Class 1A boys state basketball tournament in the SunDome. (Madison McCord, Yakima Herald-Republic)

Gonzaga forward Corey Kispert reacts to hitting a basket against Norfolk State during the first half of a men's college basketball game in the first round of the NCAA tournament at Bankers Life Fieldhouse in Indianapolis, Saturday, March 20, 2021. (AP Photo/Paul Sancya)

Before he became the West Coast Conference player of the year and first-team All-American for No. 1 Gonzaga, Corey Kispert left an impressive legacy at the Yakima SunDome.

Although an injury left him on the bench as a senior, the King's standout played in three Class 1A state championship games, winning the last two. Kispert's connections to the Yakima Valley run deeper than basketball, thanks to family ties stemming from his maternal grandfather, former Pro Bowl safety and Selah resident Dainard Paulson.

Kispert showed enough promise as a quarterback that his cousin, Jack Kuhn — a junior on Selah's basketball team — can recall Paulson hoping his grandson might follow the path to the NFL. Instead, Kispert decided to focus on  basketball.

"He dropped out of football sophomore year," Kuhn said. "My grandpa was pretty disappointed when Corey decided to play basketball."

The Lightning tried to employ a box-and-one defense to contain the 6-foot-5 sophomore, and Garza said it worked for a quarter or so before Kispert started heating up. An impressive supporting cast proved too much for La Salle in a 65-37 loss, and Kispert finished with 20 points.

"Everywhere he went we tried to shadow him," Garza said. "They ran him off screens. He would post up and then they ran him out to the perimeter. He just understands the game really well."

After another 20-point performance in a semifinal rout of Vashon Island, King's ran into the same Lynden Christian team it faced in the district championship. Longtime coach Roger DeBoer said his Lions played well that game, but they just couldn't keep up with the talented Knights.

This time DeBoer devised a different approach, similar to the one Gonzaga's Final Four opponent, UCLA, used to upset No. 1 seed Michigan 51-49 last Tuesday. The Lyncs focused on denying Kispert the ball and DeBoer said they wanted to do anything they could to "ugly it up."

It nearly worked, as LC held Kispert to just eight points and held the lead until almost midway through the fourth quarter. But Kispert's older brother, Calvin, scored a team-high 11 points and hit some big shots down the stretch to lift King's to a 45-40 win.

DeBoer said Kispert already possessed an NBA-type body the year before, when he came into the SunDome as the Knights' leading scorer. King's met Zillah in the state championship and then-coach Doug Burge said the unbeaten Leopards directed a lot of attention toward the 6-foot-4 freshman.

"It was a pleasure to watch him play," Burge said. "It was not much of a pleasure preparing to play against him."

On this day, though, the Leopards found the right solution with 6-foot guard Brady Widner, who scored 21 points in his MVP performance. Just as importantly, he held Kispert scoreless for the first half and limited him to seven points in Zillah's 52-46 win.

But Kispert would get his revenge.

By the time Kispert arrived in Yakima for a third straight year, bigger and better things were already on the horizon.

About two months before choosing Gonzaga over Virginia and Notre Dame, he entered the postseason as the most dynamic, versatile scorer on 1A's best team. Kuhn went to watch many of his cousin's games in Yakima and said teams would almost always try to face guard Kispert, hoping to not let him catch the ball.

Once again, Zillah stood out as King's top 1A competition, but this time the two teams met in the quarterfinals. Burge said the Leopards wanted to make other players beat them, and it mostly worked as they kept a lead even as Kispert racked up points.

Then a late charge capped off by Kispert's game-tying three with 16 seconds left followed by a defensive rebound gave King's a shot to win. Kispert scored 29 points but showed off his unselfishness by finding a teammate who hit a layup at the buzzer for a 65-63 win.

Garza said Kispert always knew how to make everyone around him better, and Burge believes Kispert's high character stands out even more than his talent. Perhaps the best example could be seen in his final trip to the SunDome, when he could only watch from the bench as King's finished third, capped off by another win over Lynden Christian.

"There was no bigger cheerleader in the SunDome and throughout the playoffs than Corey was for his teammates," DeBoer said. "It’s a testament to the type of person he was."

Those attributes will make it easy for all three coaches to cheer for Gonzaga and Kispert as they seek the program's first national title. Kispert's expected to be a lottery pick in 2021 NBA draft, and Kuhn said he'll be watching the Final Four alongside his grandfather, Paulson, who's come around to Kispert's decision to play basketball.

"I think he likes it because every time we turn on the Gonzaga game, he gets pretty excited to watch Corey play," Kuhn said.