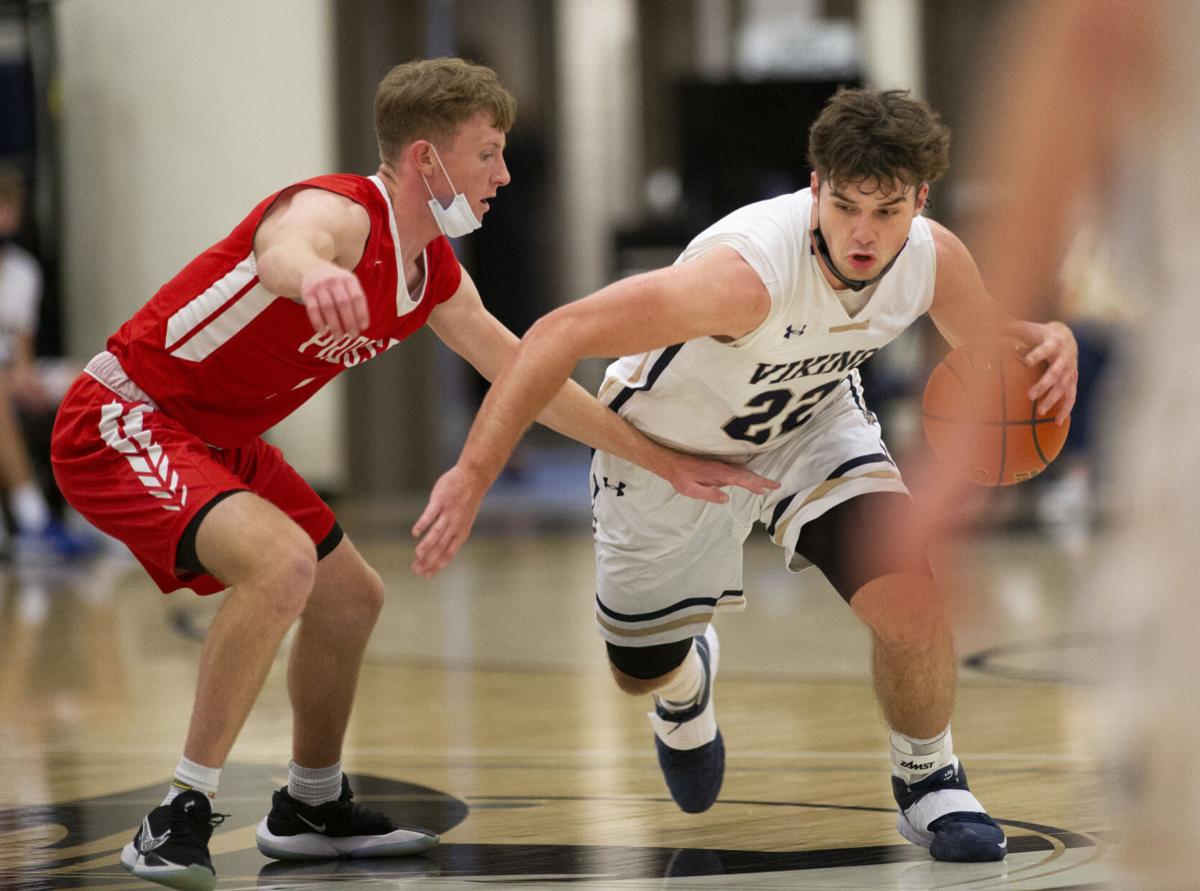 Selah's Noah Pepper, right, drives to the hoop during a 91-78 win over Prosser Saturday, June 5, 2021 at Selah High School in Selah, Wash. 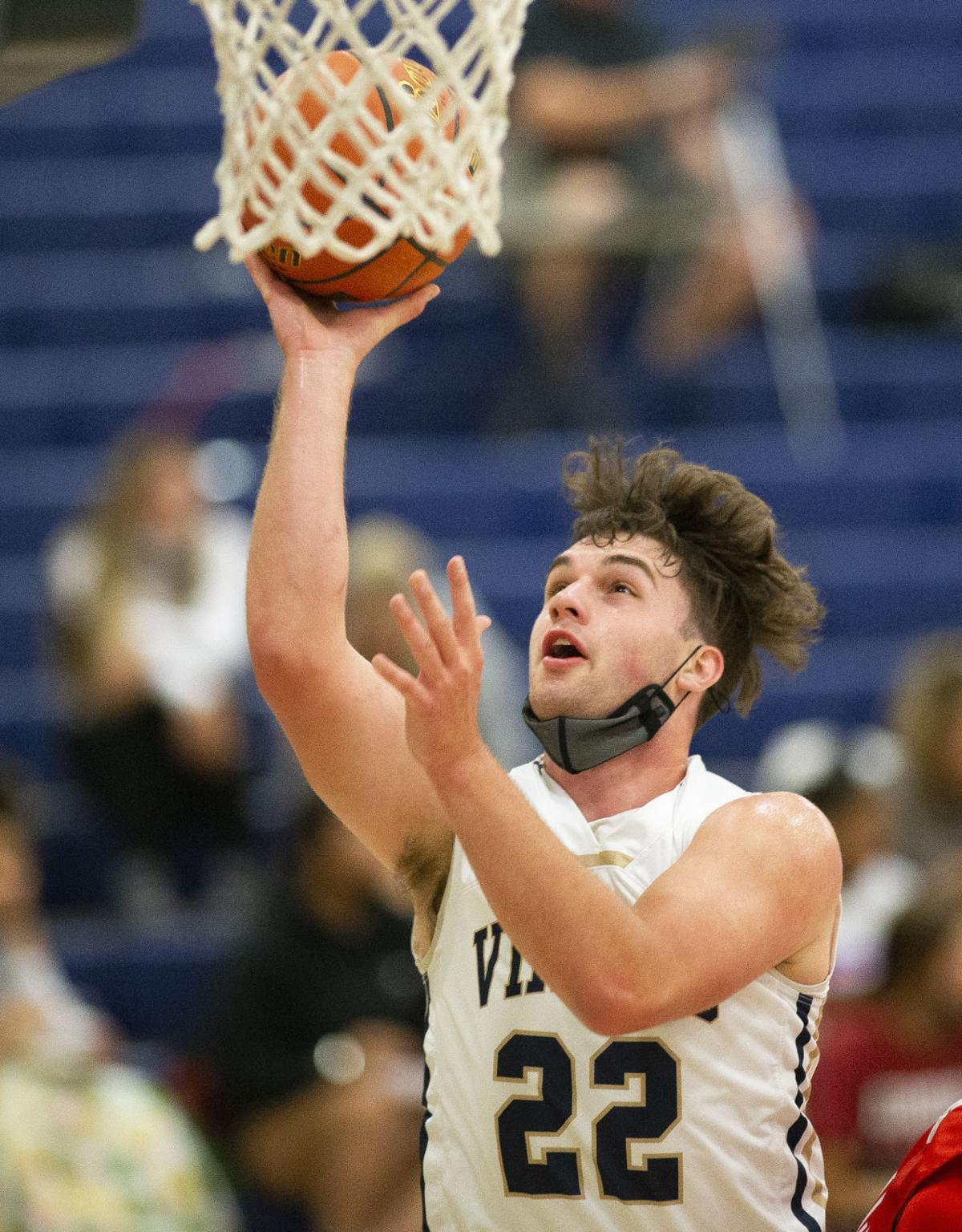 Selah's Noah Pepper, right, drives to the hoop during a 91-78 win over Prosser Saturday, June 5, 2021 at Selah High School in Selah, Wash.

Injuries sometimes seem almost inevitable the way Noah Pepper plays basketball, given how hard he competes and how often his 200-pound frame crashes to the floor.

But with just one game left in an outstanding four-year prep career, Pepper's played every one and only been left out of the starting lineup once — Senior Night his sophomore year. The constant wear and tear doesn't appear to have many effects, as he proved yet again with a season-high 37 points, 14 rebounds and seven assists in Saturday's 91-78 win over Prosser.

"Sometimes I'll ice before practice and then I'll stretch it out and then I'm good to go," said Pepper, whose grandmother bought him a padded football girdle to wear beneath his shorts halfway through Selah's freshman season to help protect Pepper's tailbone when he falls. "I really don't like to take breaks, ever."

Selah coach Tim Garza brought Pepper to the bench twice in the second quarter of Saturday's fast-paced game for a total of 74 seconds, which is about all the rest he typically gets until the fourth quarter if the Vikings have built a big lead. Still, Pepper learned from his dad, Ryan Pepper, to never take a play off, and Garza recently started calling the 6-foot-4 senior "Superman."

That relentless effort combined with Pepper's talent produced some eye-popping numbers, including 1,898 points and the number he appreciates most — 1,030 rebounds. Pepper's scored at least 20 points in every game of Selah's unbeaten season and as always, he leads the team in charges taken.

Despite Pepper's remarkable games played streak and desire to play through anything, even he acknowledges there's a point when playing's no longer possible, just not during the high school season.

He reached it as a seventh grader when it turned out lingering ankle issues came from seven fractures, which ended up requiring surgery. Another injury the next year sidelined Pepper again, when doctors put a screw in his wrist after he broke it taking a charge.

The summer after his freshman season he rolled his ankle badly enough to tear a ligament, leading to full ankle reconstruction surgery that healed a day before high school practice started. He played through pain below his kneecap for most of last season before going in for another minor surgery after winning a second straight CWAC player of the year award.

"He's so tough," Garza said. "He's always got the heard of a lion and it's just going to be tough to replace somebody like that."

Seattle Stars coach Benjamin Blue coached Pepper in AAU for one season and spent several others coaching against the Central Washington signee. He remembers always struggling to find ways to contain Pepper, who wasn't afraid to play anywhere or guard anyone with the Stars.

Blue credits Ryan Pepper for instilling a strong fight and great basketball IQ in his son, who Ryan Pepper coached from third to seventh grade. Noah said his dad taught him and his two brothers how to do "the little things" and always emphasized the importance of defense and rebounding.

The Pepper parents also played a key role in pushing their sons to stay in shape, whether it's random exercises from Ryan or running at the YMCA, where his mom, Danielle, works as a trainer. When COVID-19 shut down gyms, Ryan challenged Noah and his brothers to run a certain amount of miles outside.

With all the punishment he takes, Pepper understands how important it is to do whatever he can to take care of his body. But when Garza tells his star player to try to fall less, Pepper likes to reply, "that's what ice is for."

Finishing strong and moving up

Since Selah couldn't play in the state tournament this season, Pepper said the Vikings wanted to send a statement that they were one of Washington's best 2A teams.

Saturday's third win over Prosser in three games clinched an outright league title, moving Selah within a win over last-place East Valley of an unbeaten season. Pepper felt some weight off his shoulders this season thanks to the addition of East Valley transfer Jace Durand, who scored 20 points matched Pepper's seven assists on Saturday, but Pepper still powered the Vikings offense with 26.9 points per game.

He showed his versatility against the Mustangs, attacking the basket when his jump shot wouldn't fall. Pepper said he never lost confidence, but when Prosser cut the deficit to two after three quarters, he understood the need to take a different approach.

"It got to the point where I can get to the bucket, I think, whenever I want so that's what I started doing at the end of the game," Pepper said after scoring 13 of Selah's last 22 points. "I started taking control a little bit and getting easy ones."

Afterwards, he met at midcourt to embrace Prosser's Haden Hicks, who scored 32 points tp go with eight rebounds. Pepper said it was special to play one last time against someone he's gone up against since first or second grade, and the two briefly played together for the Seattle Stars.

But Pepper's eager to take on his next challenge at Central Washington. While he would have preferred a different ending, he's still proud of everything he accomplished at Selah.

"Obviously (this season is) different because we would love to play for the gold ball and I think we would have had a good shot this year," Pepper said. "I think at this point we are juts thankful to have every game that we get."