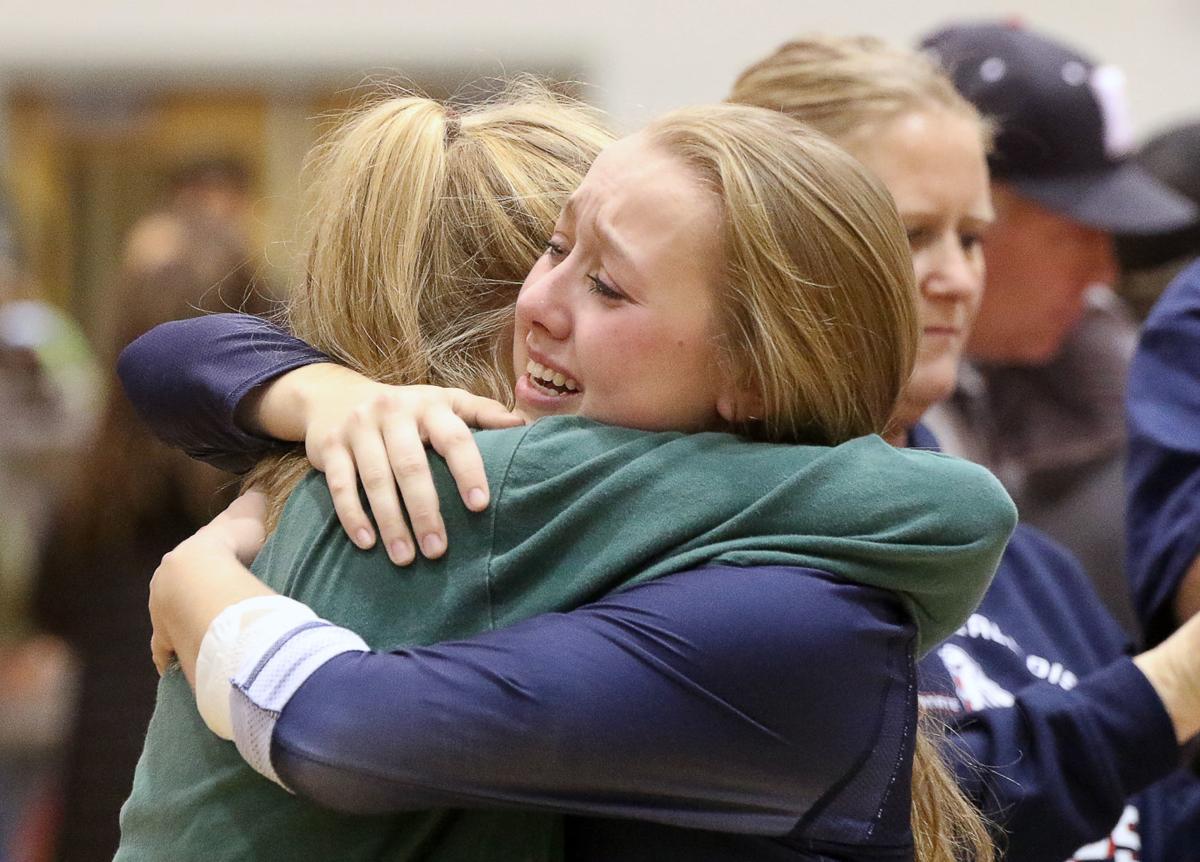 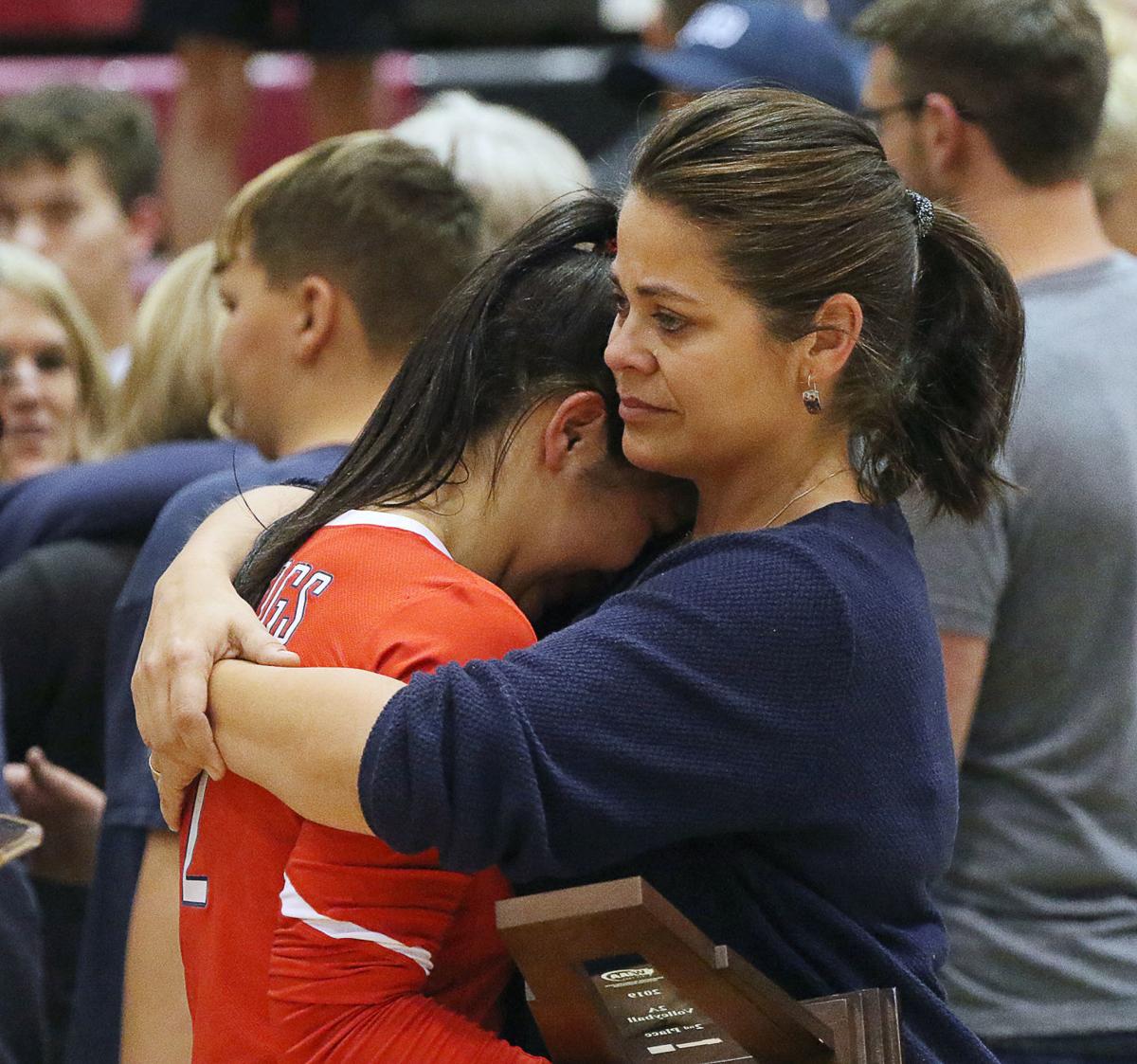 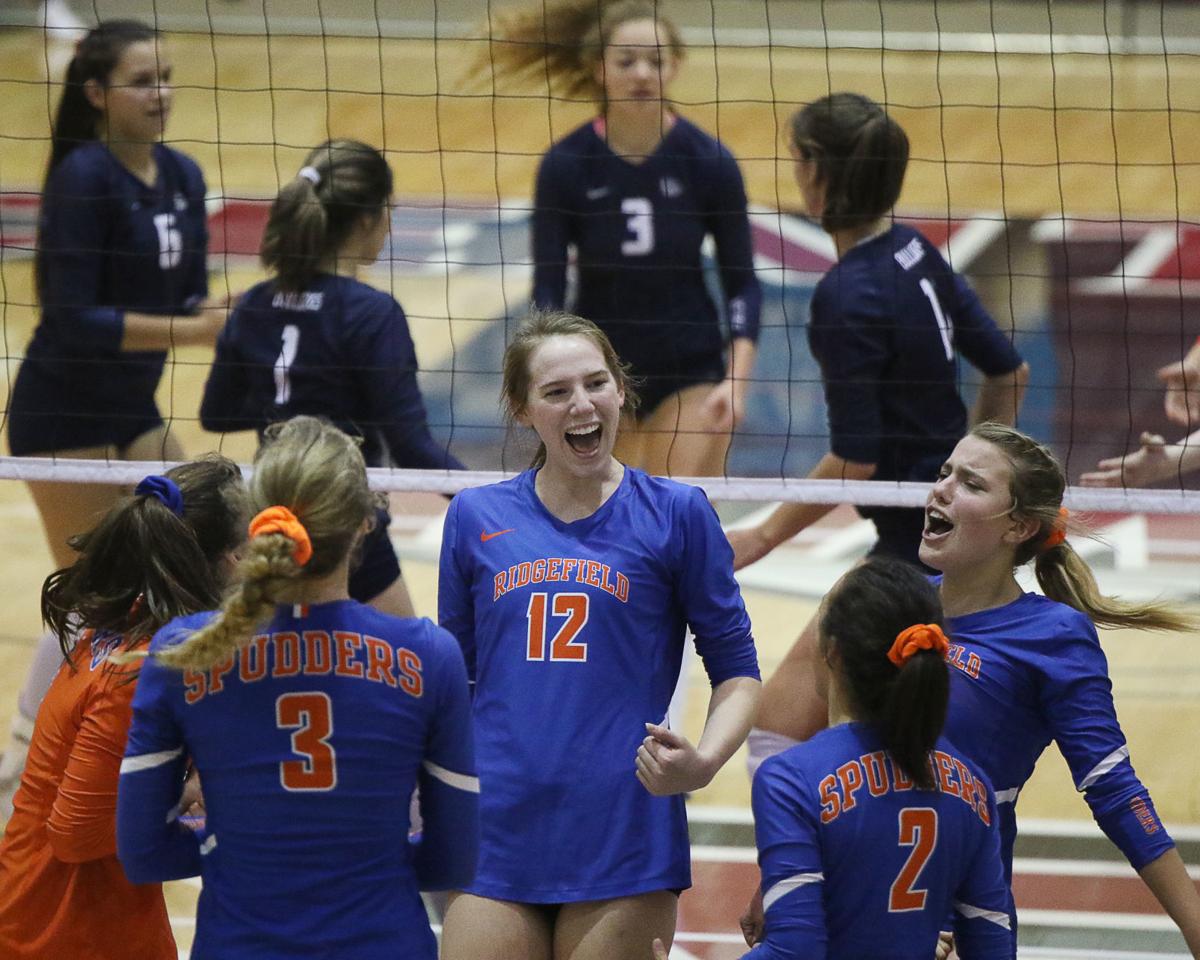 Ridgefield High School react to a kill against Ellensburg High School during the Washington Interscholastic Activities Association 2A state championship final Saturday at the Nicholson Pavilion at Central Washington University. 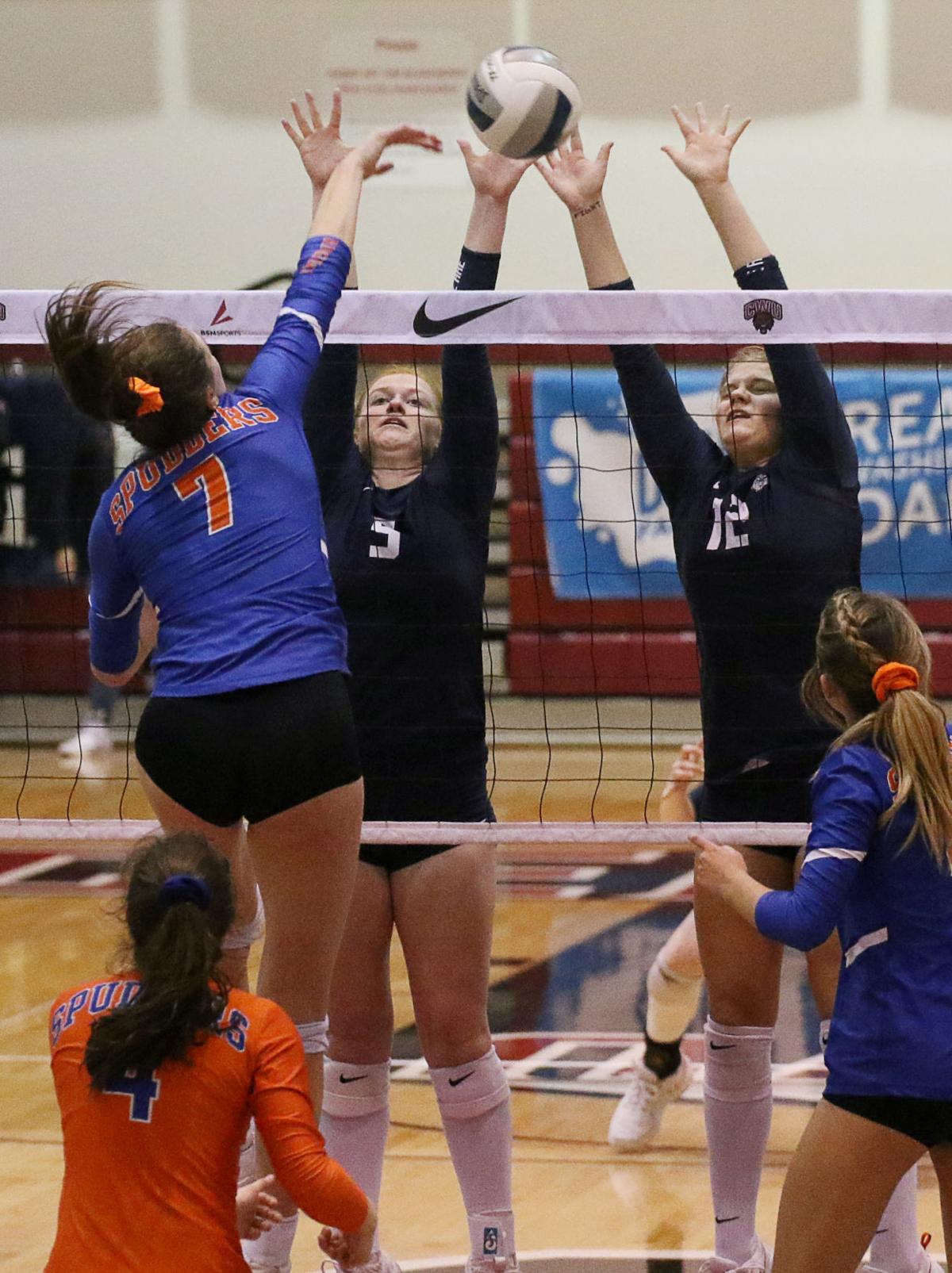 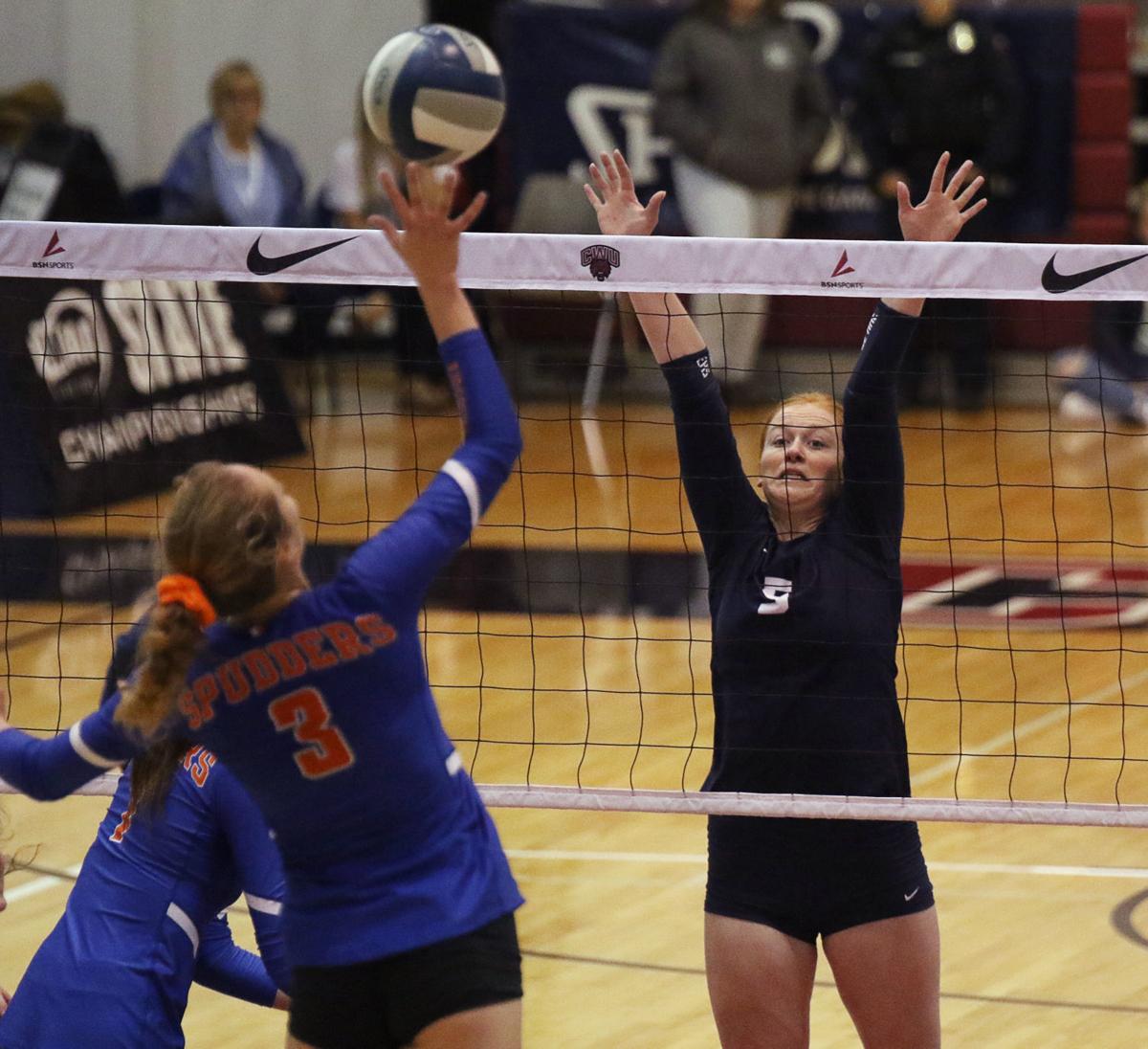 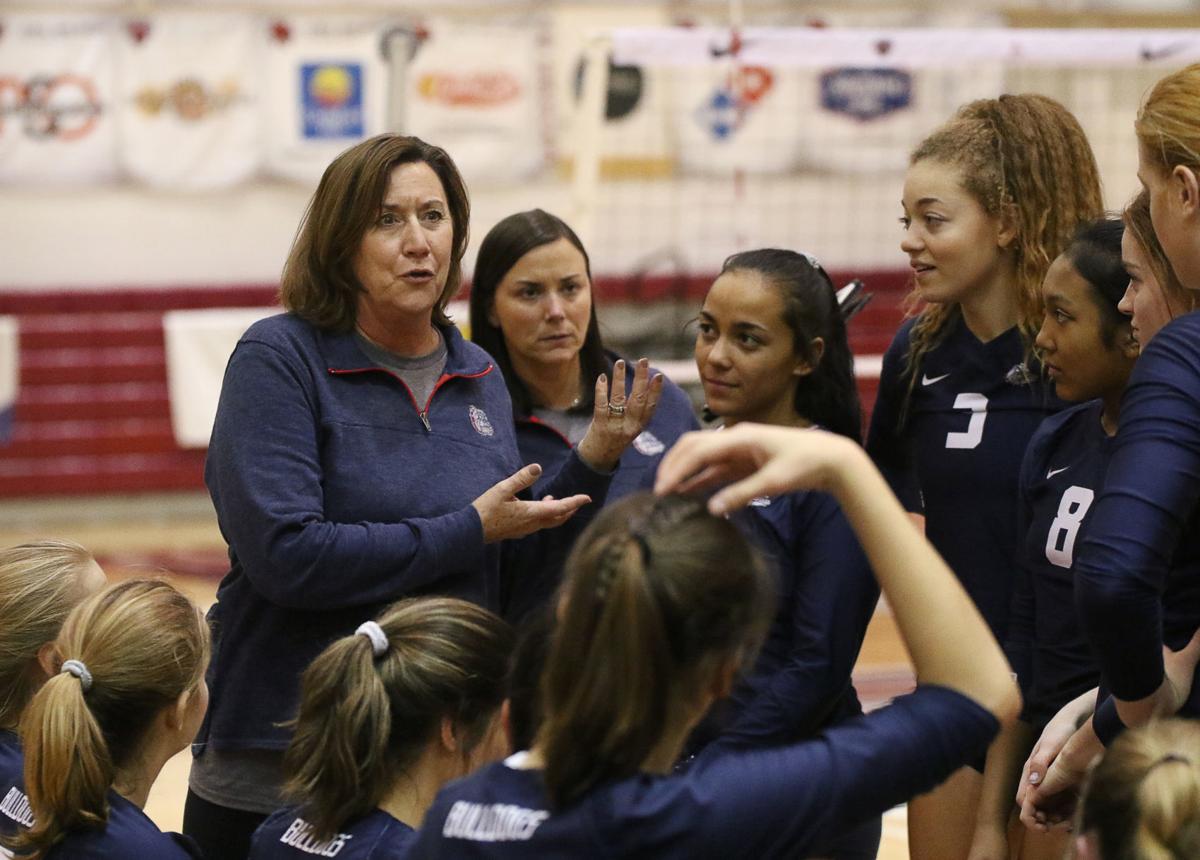 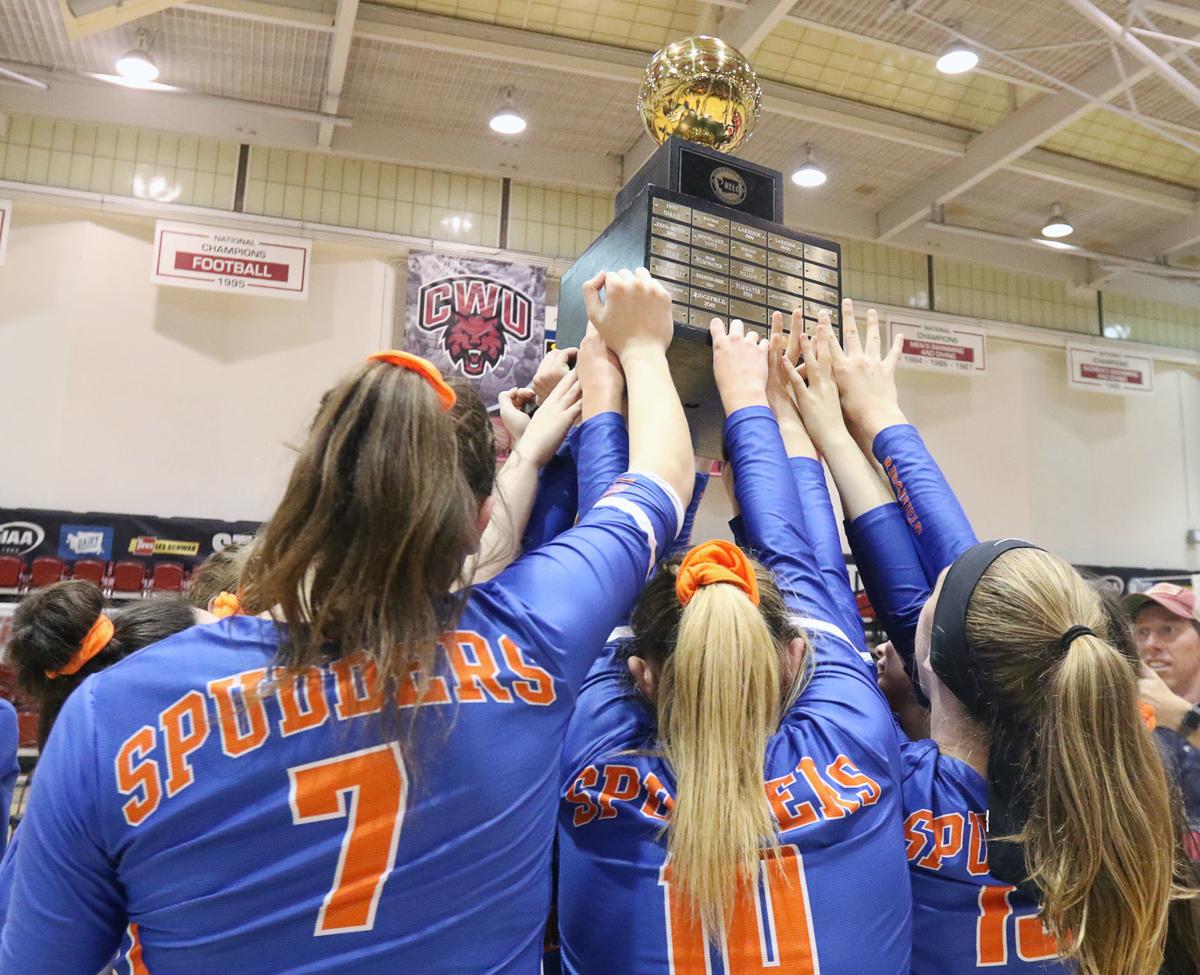 Ridgefield High School react to a kill against Ellensburg High School during the Washington Interscholastic Activities Association 2A state championship final Saturday at the Nicholson Pavilion at Central Washington University.

ELLENSBURG — If you cheered for the Ridgefield Spudders and your shirt read ‘Respect the Potato,’ fair enough.

This band of hard-swinging giants can drill with anybody at any level in the state, and top-ranked and unbeaten Ridgefield did what was expected Saturday night — exit Nicholson Pavilion with a second straight Class 2A state title.

But that prize had to be wrested in four sets from a gritty band of can-do Ellensburg Bulldogs, who rode a wave of thunderous hometown roars to a huge semifinal victory and a second-place trophy.

Avenging two losses a month ago to nemesis Burlington-Edison, Ellensburg conceded the first set and then took command en route to a 15-25, 25-17, 25-22, 25-18 win over the second-ranked Tigers in the early afternoon.

That earned the Bulldogs a date in prime time against the towering reigning champs, who powered, sputtered and then powered their way to a 25-16, 25-9, 22-25, 25-14 championship victory.

“We haven’t seen that type of competition,” said senior libero Shauny Fisk, who dug 19 of the heavy swings. “I mean it stinks to loose, but that’s a great team. In the third game, we just believed in each other and I’m so proud of that. For the (eight) seniors, it was our last game together.”

Ridegfield, which finished 30-0, leaned on the big arms of 6-foot-1 Idaho signee Delaney Nicoll, last year’s 2A player of the year and likely to be again, and 6-4 junior Allie Andrew, who’s got major colleges already waiting in line.

In the third set, however, Ellensburg settled its nerves, got into its offense and assembled a credible block to extend the match. When the Spudders seemed on their way to a quick sweep with a 12-7 lead, the Bulldogs said not so fast with an 8-0 run.

“They’re big, and we haven’t seen that level of big before,” said coach Debbie Landrie. “But these girls believed in themselves. We were a little intimidated, yes, but we stopped passing on top of the net and started playing together. They battled for that set.”

While that single set was rewarding for who it came against, the semifinal offered the ultimate satisfaction.

“That was our best match of the season,” said Fisk, the CWAC’s co-MVP, who collected 81 digs in four state matches. “We haven’t beaten Burlington as long as I’ve been here.”

Sophomore Reaghan Naboychik pounded on B-E for 18 kills, a day after racking up 21 against both North Kitsap and Tumwater. She finished with 73 for the tournament.

Freshman Abby Harrell had nine of her 46 tournament kills, and Leah Stueckle had 20 assists and 10 digs.

“Burlington was huge,” said Landrie, who team gained a spot over last year’s third-place finish despite graduating star Tia Andaya. “We have battled them over the years and lost twice this season. This is a special group and I knew they were capable of this.”