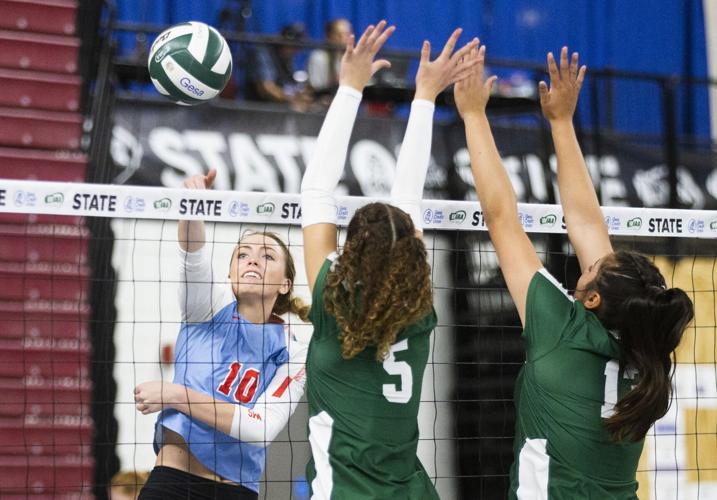 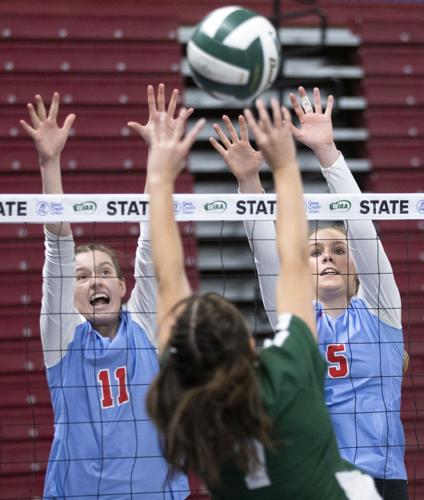 West Valley's Lexi Barbee, left, and Kaitlyn Leaverton, right, jump to block a shot during a 4A state volleyball tournament match against Jackson Saturday, Nov. 19, 2022, at the Yakima Valley SunDome.

The postseason was filled with highs and lows for West Valley's volleyball team, which reached the final day of the Class 4A state tournament but fell a win short of the trophy round.

After splitting two matches on Friday, the Rams returned to the SunDome on Saturday and charged out to win the first set in a loser-out clash with Jackson.

It was the same story for Wenatchee, which shared the CBBN league title with West Valley and captured the district championship. The sixth-seeded Panthers won their opener Friday morning but then fell to Mount Rainier and Olympia — both in five sets — and were eliminated.

In the first set against Jackson, West Valley closed with a 10-1 run. But the Kingco qualifier sustained early leads in the second and third and then fended off a WV's big rally in the fourth. Down 22-16, the Rams rode Kennedy Webb's serving run and Kaitlyn Leaverton's net play to a 6-0 run that tied the set at 22. But Jackson got a sideout and scored the final three points.

Stunned in the morning on Friday, West Valley was slow to shake it off in the late afternoon. But once the cobwebs were cleared, the Rams found their best game to stay alive.

"We were a little frantic to start, but then we came together and started communicating better and that's always important," said senior libero Emily Strong, who had 19 digs. "We picked our energy up and started focusing on celebrating each point and resetting for each point. That helped us play so much better."

For an unsettling stretch against Skyline, the No. 16 seed, West Valley's offensive rhythm was disjointed by its struggles with passing, the main issue in the 25-16, 25-23, 25-11 loss to Camas.

"This team has always been on the quiet side and it was all about getting some intensity and energy," said coach Jill O'Brien. "After the second set, I just said, 'Look, you know how to pass, you know how to execute and you know how to play at a high level. Now go do it.' They turned it around from there."

Unlike the first two sets, including the one they won, the Rams shot out to a quick lead at 7-2. Skyline fought back to within 11-10, but West Valley hit the gas again and took charge the rest of the way.

Better communicating was helpful and better passing was certainly a plus. But having the biggest arm on the floor was a difference maker with Webb, the Central Washington signee who pounded 26 kills, served seven aces and had 14 digs. The Spartans had no answer for that.

Down 14-12 in the opening set, Webb sparked a 6-0 run with four of those aces, the flat and deep variety that had Skyline's backrow edgy all match. Lily Kinloch turned in a double-double with 13 kills and 15 digs and Lexi Barbee collected 44 assists as the senior class took charge to push its season to another day.

The WIAA handed out 48 trophies during two weeks of state volleyball tournaments in the SunDome. Here's the rundown: