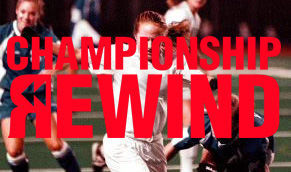 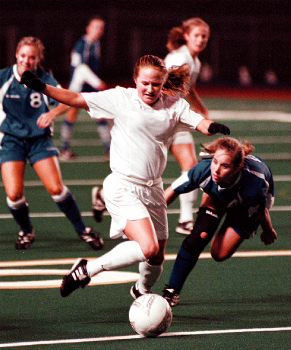 West Valley's Haley Miller breaks away with the ball against Lakeside during a 2001 Class 3A state semifinal in Federal Way. (Photo courtesy Jane Freeman)

West Valley's Haley Miller breaks away with the ball against Lakeside during a 2001 Class 3A state semifinal in Federal Way. (Photo courtesy Jane Freeman)

It’s rare enough for the Valley to capture two state titles on the same day, but West Valley and Naches Valley capped undefeated seasons on the same field at the girls soccer state finals in 2001. East Valley earned the first local state championship in girls soccer just one year earlier.

But it wasn’t enough for Lakeside to defend its Class 3A state soccer title as Schefter made sure West Valley brought the trophy home Saturday night with both goals in a 2-1 state championship win at Federal Way Stadium.

The victory caps a 24-0 romp through the season for West Valley and it’s the first girls state soccer championship for the school.

“This is an awesome feeling,” coach John Schubert said. “These girls were singularly focused on this very goal since they lost last year. It is very nice to win two games to round off a perfect season.”

Schefter missed the first 15 minutes of the game for missing curfew by 15 minutes Friday night after the Rams’ 2-0 semifinal victory over Liberty. Haley Miller also missed time, although less than Schefter, and the Rams seemed unsettled by the absence of their two standouts.

Once the pair was in the game — Schefter checked in at the 17-minute mark, Miller a few minutes earlier — the Rams settled down and began pressing the attack. But to no avail.

Lakeside, which entered the championship game with just one loss, managed to exert just enough offensive pressure to keep the Rams defenders honest and seemed to find ways to nullify West Valley’s offensive forays through the majority of the first half.

Miller had a left-footed attempt at the 19-minute mark and Schefter missed wide-right with 30 seconds to play before the break. After those attempts, it looked like West Valley, which scored nine or more goals 10 times during the season, would be down to the final 40 minutes to find the net and win a title.

But as the seconds ticked down, a bungled clearing pass was directed toward Jenny Springer. The junior forward suddenly found herself face-to-face with Lakeside goalie Alison Myers. As Springer headed toward the goal with one thought on her mind — “I just wanted to net it,” she said — she was clobbered from behind by a Lakeside defender inside the penalty area.

Suddenly, West Valley had Schefter and her 47 goals one-on-one with Myers. She slapped the ball into the upper right corner of the net for a 1-0 lead with just two seconds on the clock.

When the second half started, the lead didn’t last long. Sophomore mid-fielder Teryn Allen beat Rams goalie Stephanie Bowers with a sharply angled shot from the right wing. Even more suddenly, with 35 minutes to play and both teams struggling to find any offensive rhythm, the game was knotted at a goal apiece.

Both teams had chances in the next 20 minutes. Lakeside’s Mary Kuder sailed a 25-yarder from straight away over both a leaping Bowers and the crossbar in the 58th minutes, then West Valley’s Lyndsey Deluca missed a long looping shot after Myers bobbled a corner kick.

Just five minutes after Deluca’s miss, Springer got the ball on the right sideline and steamed down the field before launching a 25-yard attempt from the wing. Myers again muffed the clear and looked up to see the ball just left of midfield and at the feet of Schefter, widely regarded as the best age-group girls soccer player in the state.

The slender senior proved soccer is a game of angles, sliding a shot to the far post past Myers, who was guarding the near post. With 14 minutes left to play, the Rams had a lead they would not lose.