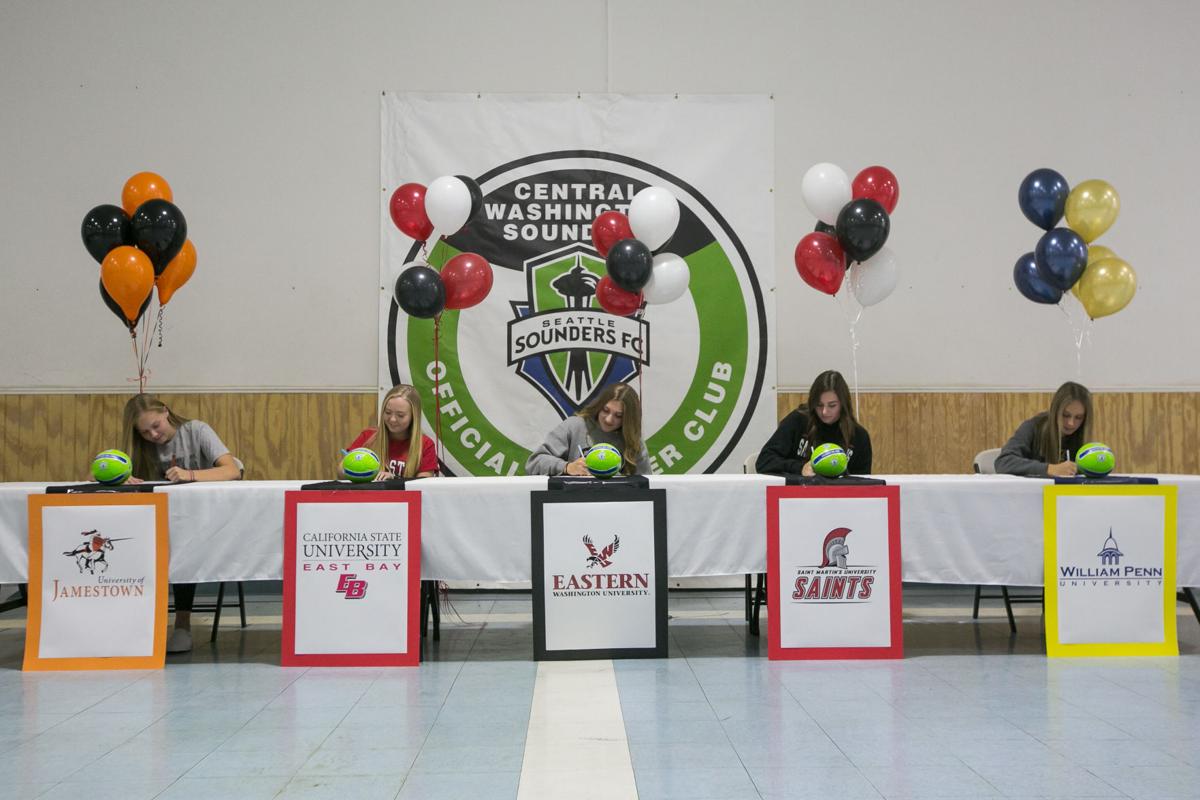 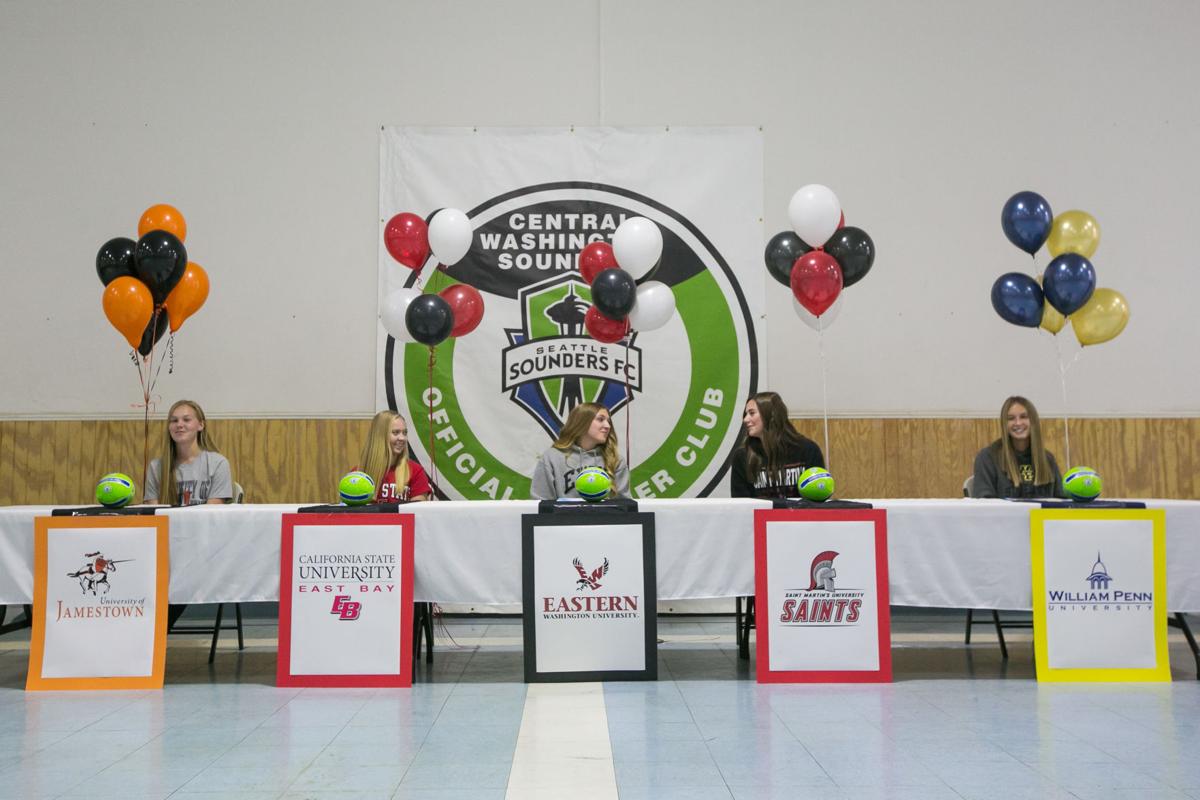 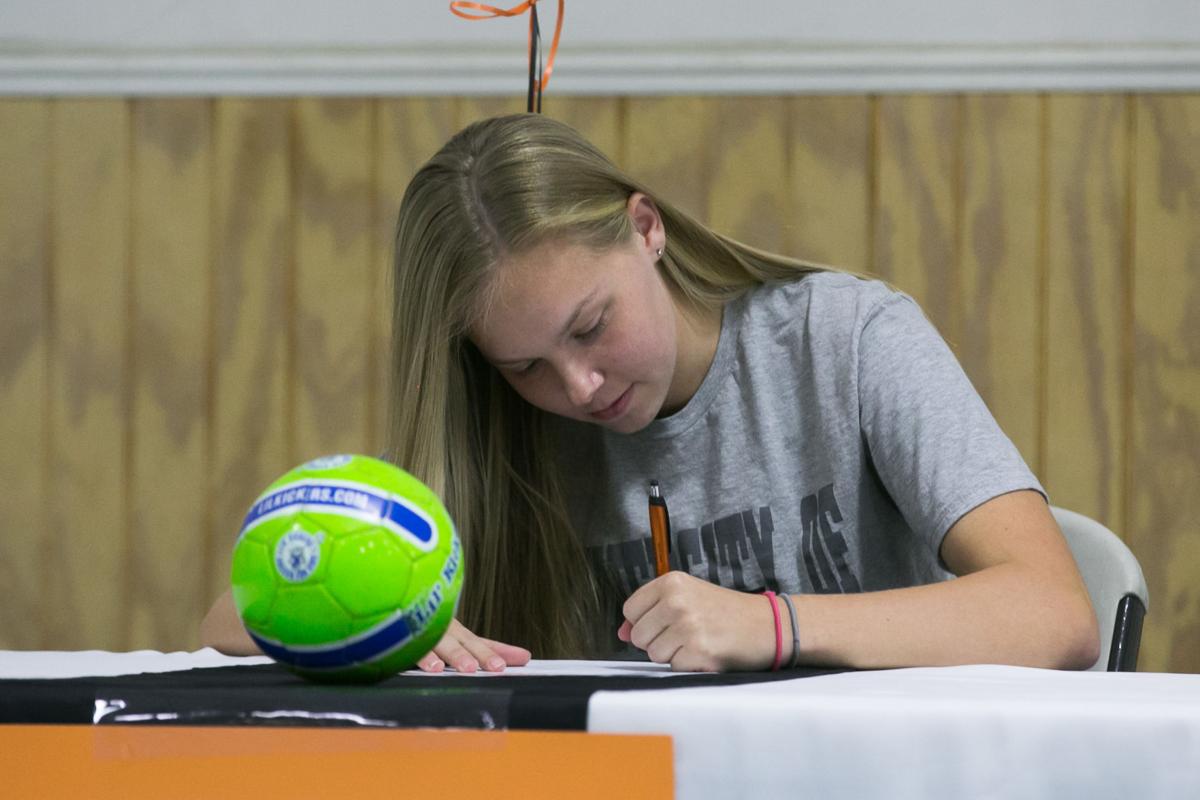 Selah High’s Chloe Andrews signs her letter of intent to attend University of Jamestown Wednesday, Nov. 11, 2020, at Trinity Church of the Nazarene in Yakima, Wash. 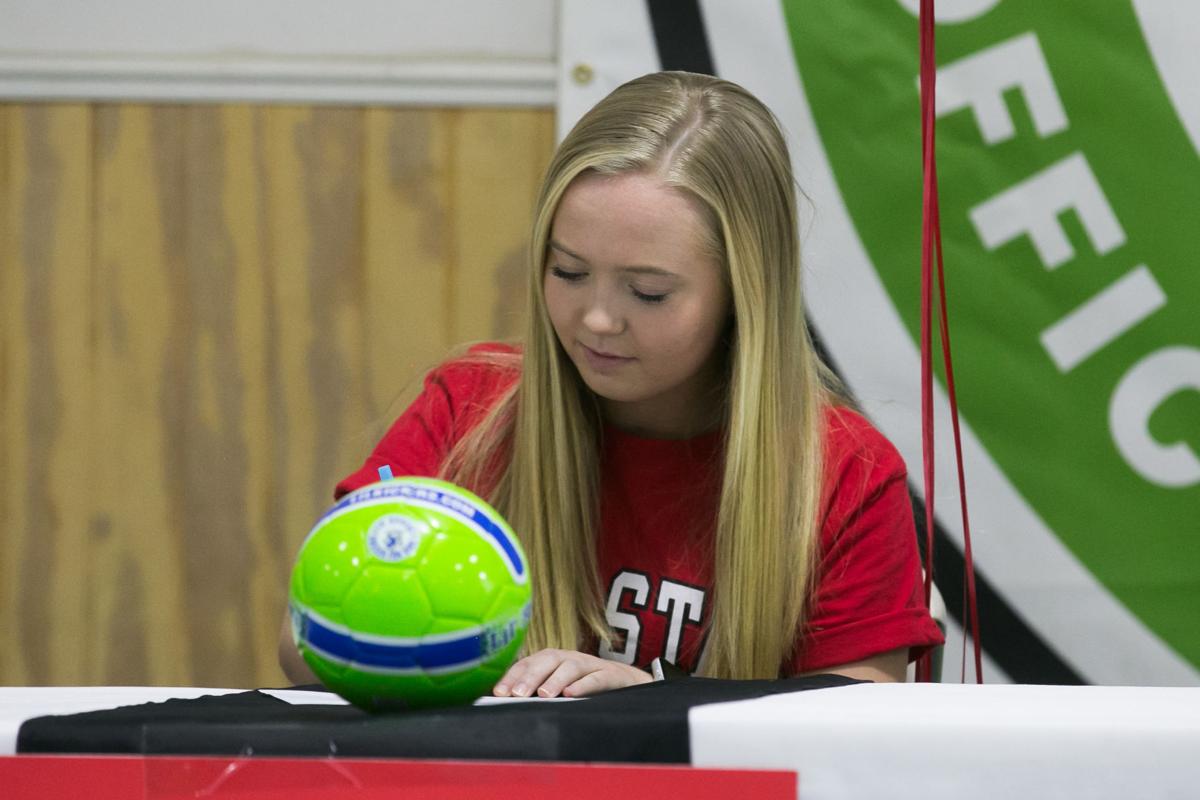 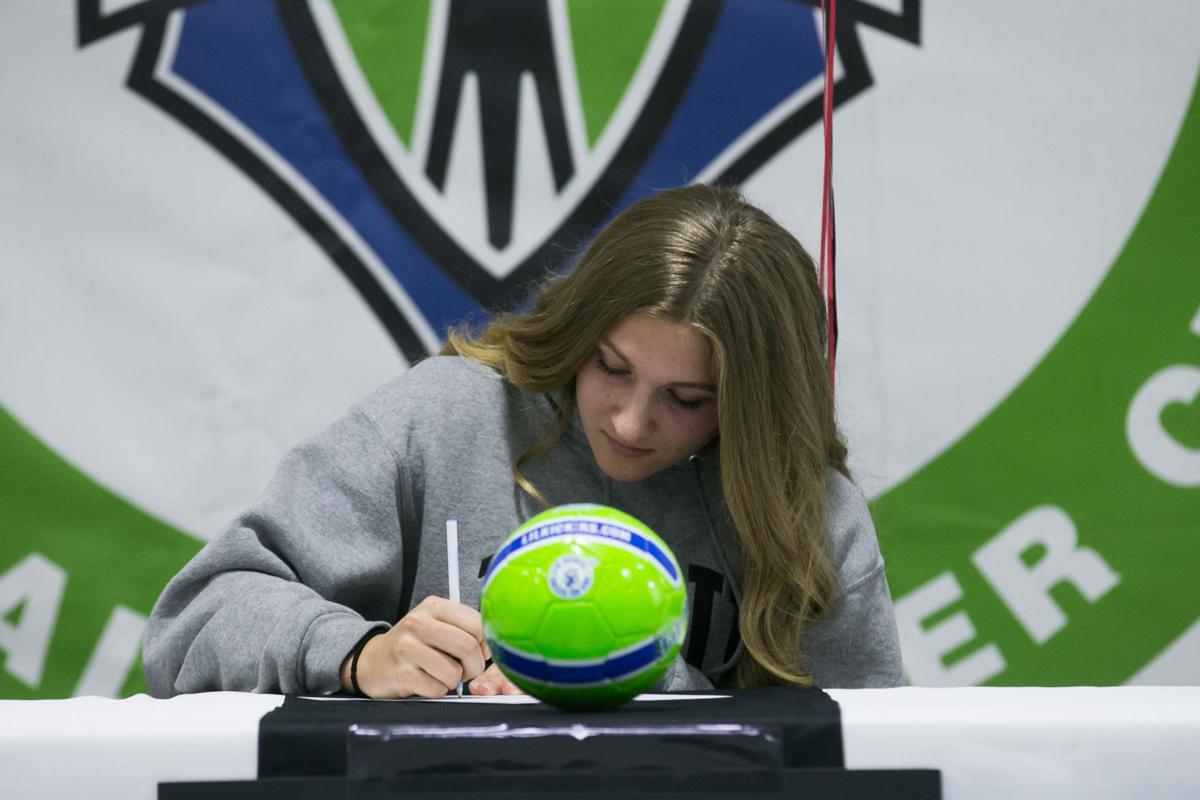 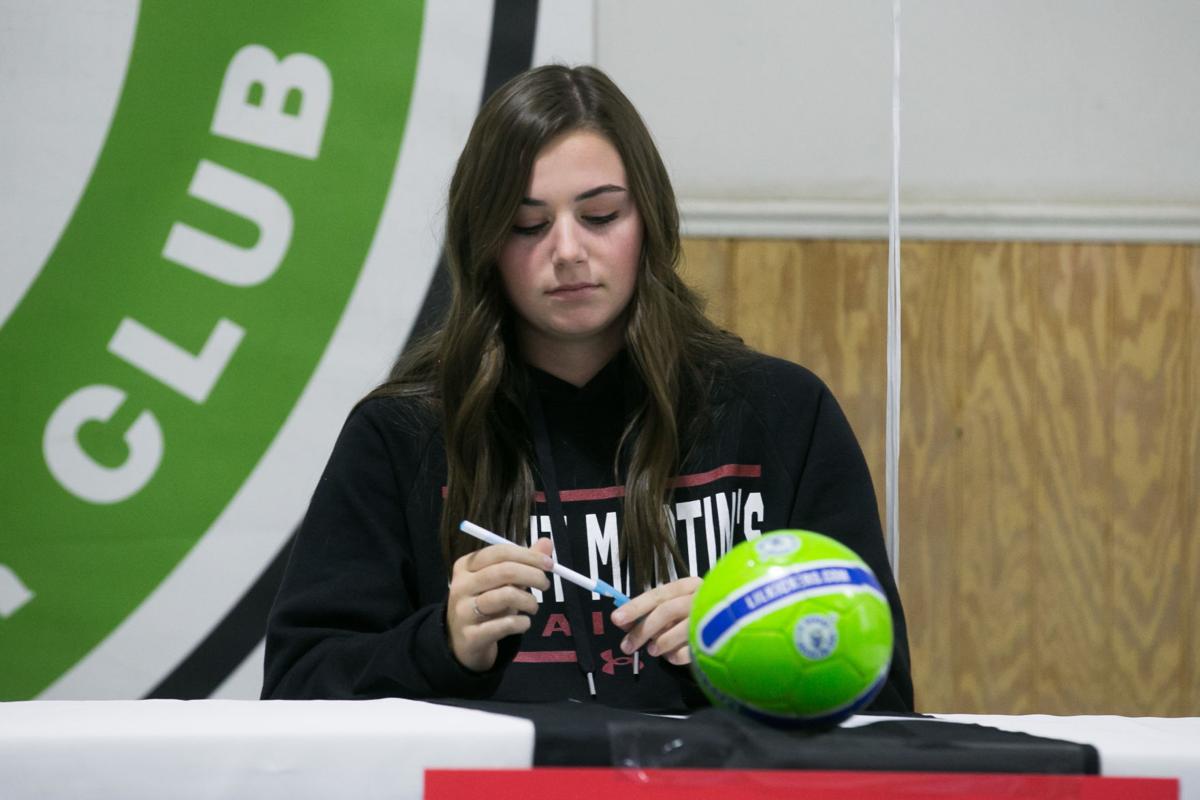 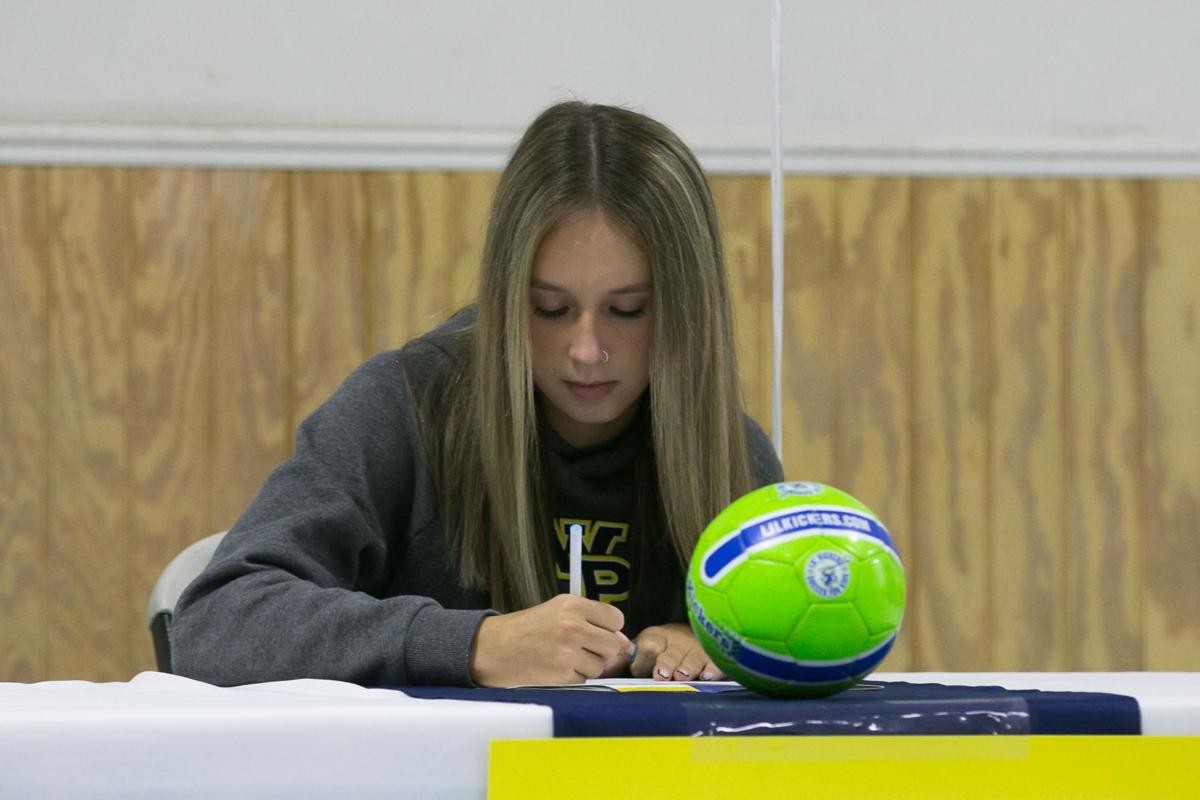 Selah High’s Chloe Andrews signs her letter of intent to attend University of Jamestown Wednesday, Nov. 11, 2020, at Trinity Church of the Nazarene in Yakima, Wash.

“These other four girls, they’re awesome,” Russell said. “They pushed me since we started playing together.”

Kupp, a midfielder who assisted the game-winning goal to lift Davis to its first district win in four years last fall, will play Division I soccer at Eastern Washington. She’s looking forward to joining former Sounders teammate Grace Terrill, a 2020 Cle Elum graduate, and Kupp spent six years traveling with her parents to Cheney for virtually every home football game to watch her brothers Cooper and Kettner enjoy standout careers for the Eagles.

“My sister-in-law (M’Kenna Hayes), she played for (coach Chad Bodnar), so there’s that connection as well,” Kupp said. “I got to see her play.”

Andrews, a first team all-CWAC forward as a junior, will also play alongside a former Sounder at the University of Jamestown in North Dakota. Although the two never played together, Andrews said all-time La Salle goals leader Kamryn Fiscus, who leads the Jimmies with seven goals and eight assists this fall, offered plenty of help on a recruiting visit.

“It’s been a difficult year with COVID and so I was like, ‘we should take advantage of this,’ and so my dad and I flew out and had a visit,” Andrews said. “I practiced with the team, the girls were extremely friendly and I loved everything about the school.”

Jamestown opened its season by knocking off William Penn, the NAIA school Wammock plans to attend next fall as a defender. But first the five seniors all hope to play one final high school season next spring, tentatively set for March 1 through May 2.

That will prevent them from playing another full season with the Sounders, but they hope to travel to some tournaments, including one in Nevada next month. Lackey said another standout Sounder, forward Gillian Martin, has been in close contact with Gonzaga and hopes to sign before graduating from La Salle next spring.

A pair of East Valley seniors signed with schools to continue their athletic careers this week.

First team all-CWAC North running back Tyler Stone plans to play Division III football for the University of Puget Sound. On the baseball diamond, outfielder Bryce Larkin will play in the NWAC at Wenatchee Valley.