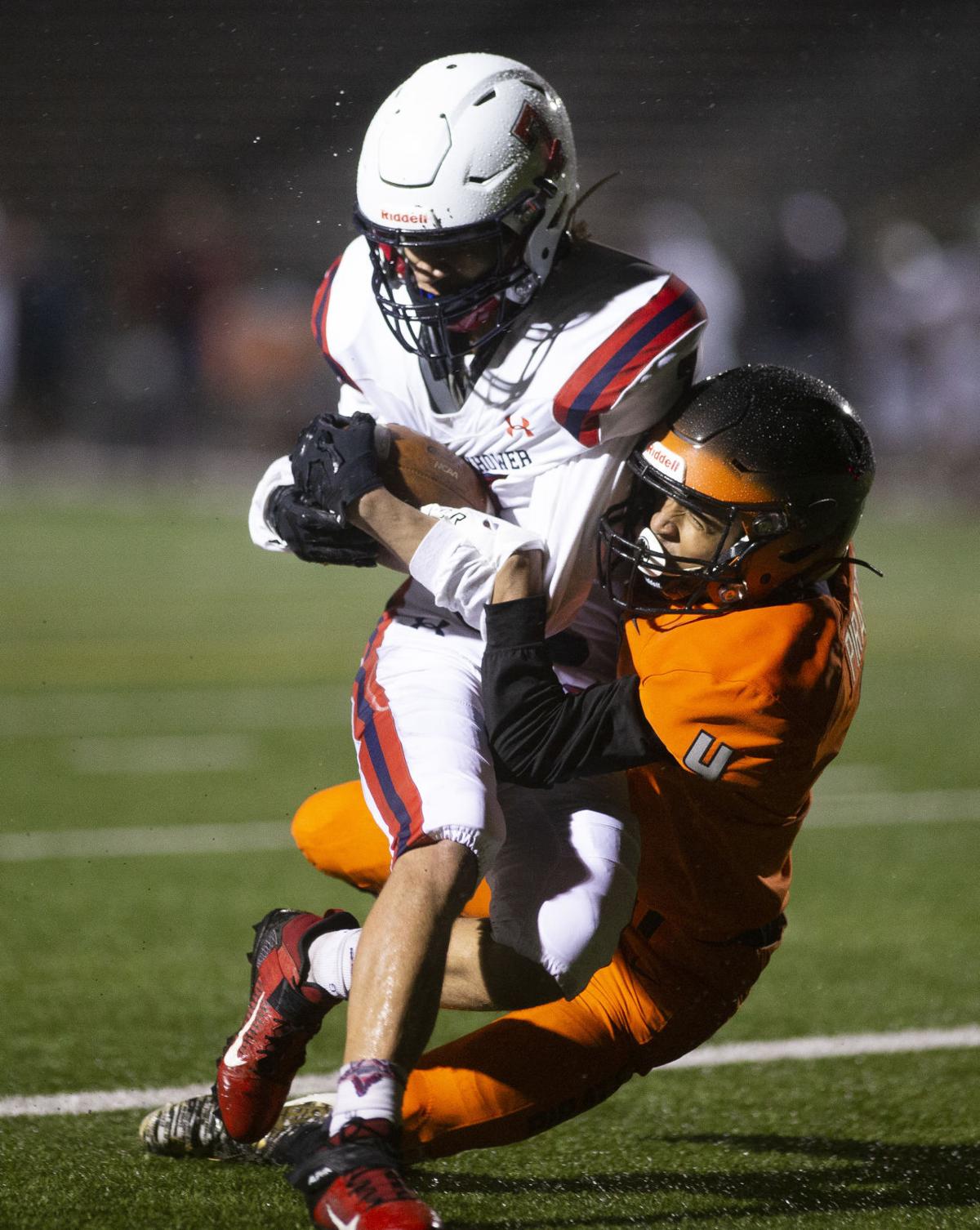 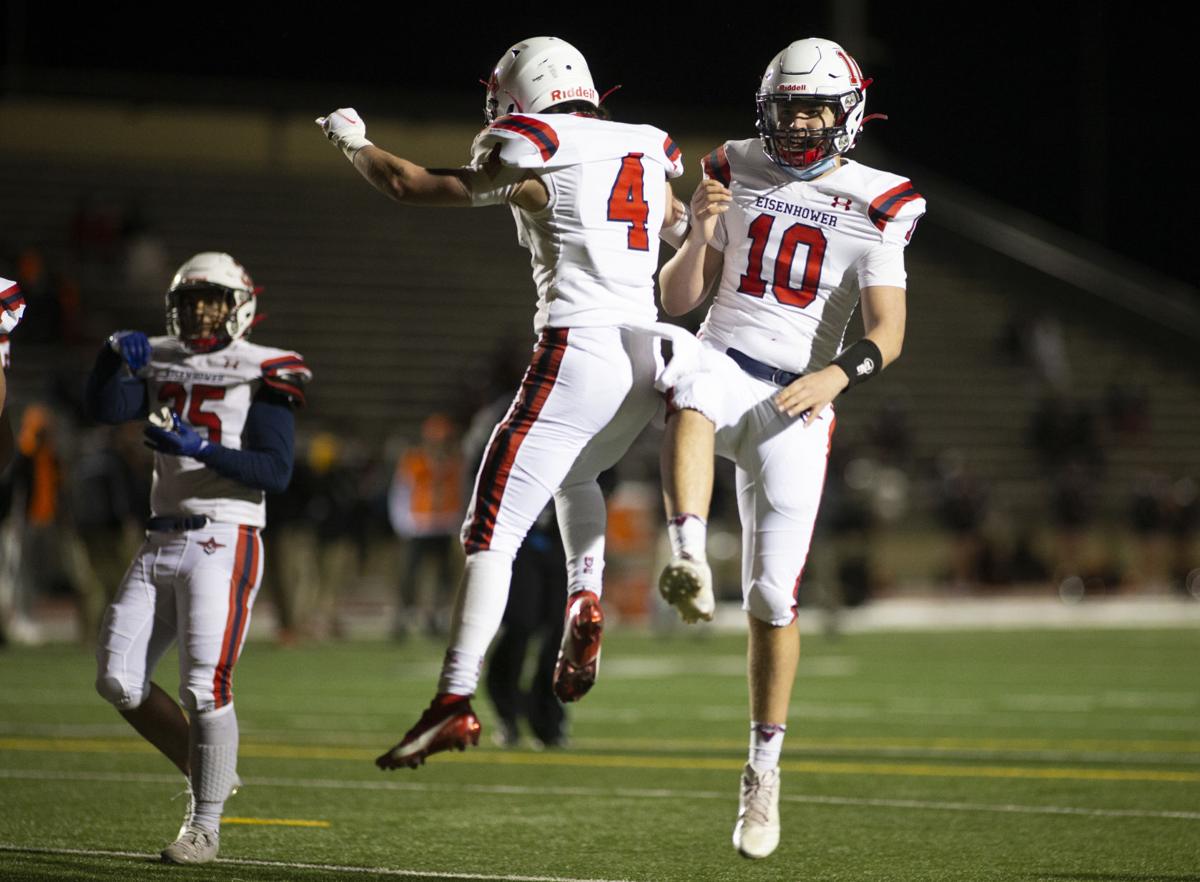 Eisenhower's Nahum Garent, right, and Stevan Rodriquez, left, celebrate after the pair connected for a touchdown during a 12-6 win over Davis on Friday, March 5, 2021 at Zaepfel Stadium in Yakima, Wash. 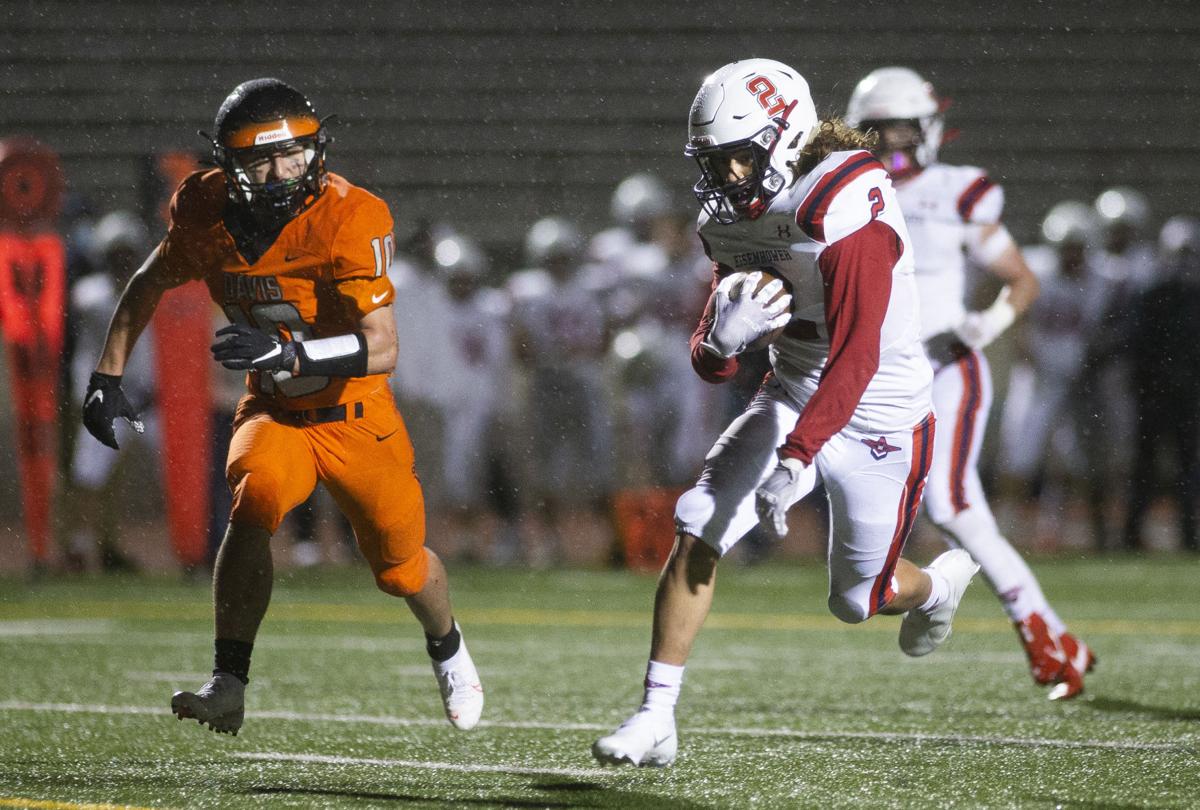 Eisenhower's Jorge Garcia rushes for a touchdown against Davis on Friday, March 5, 2021 at Zaepfel Stadium in Yakima, Wash. 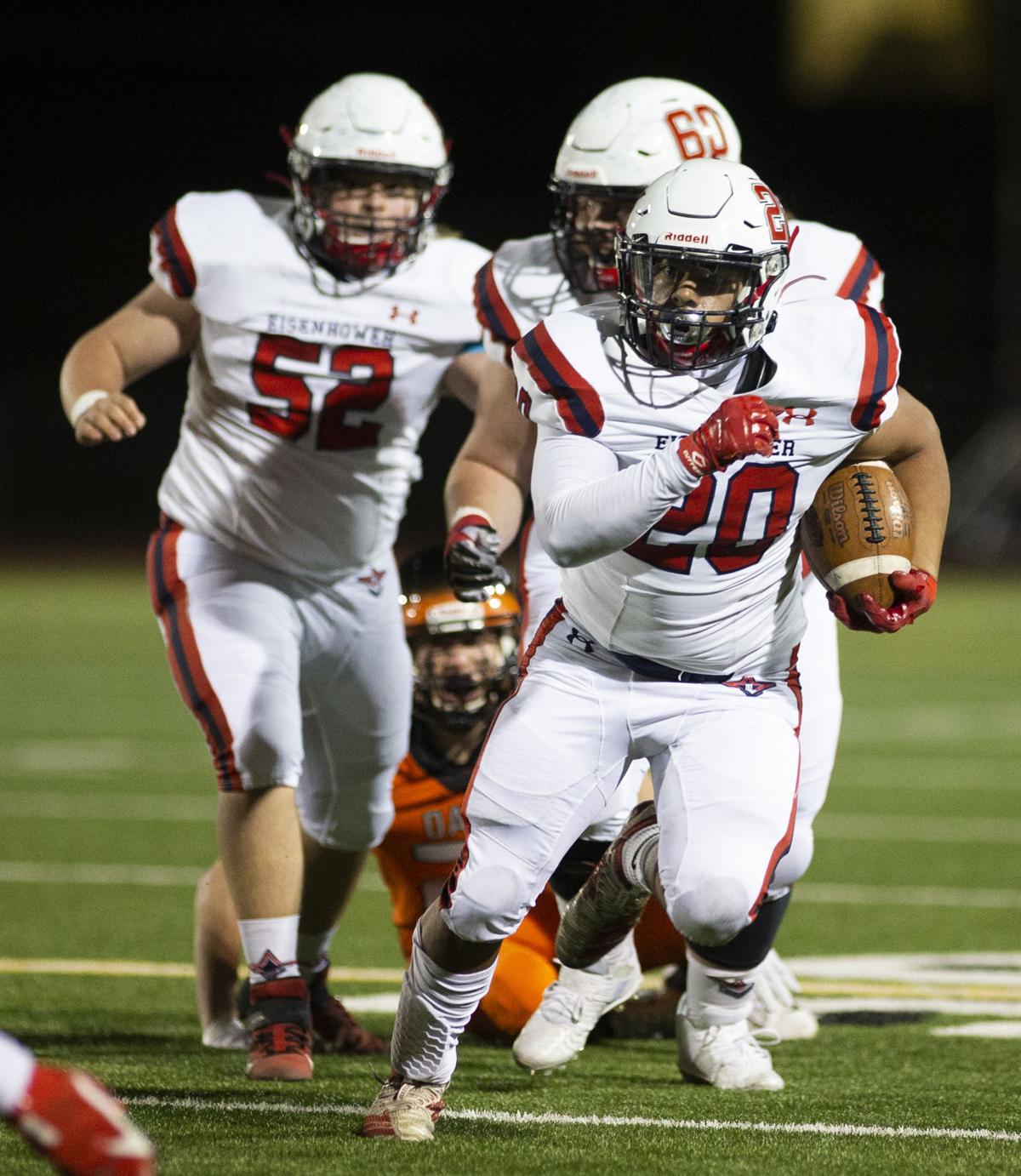 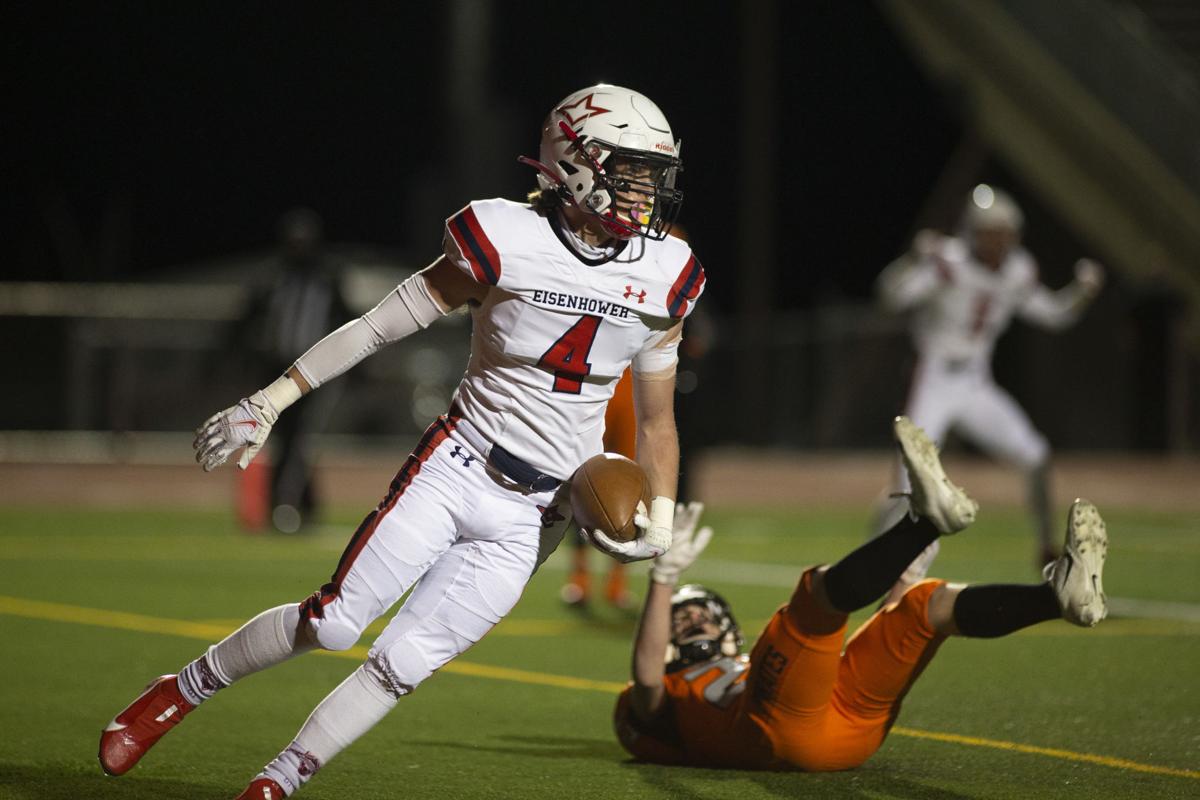 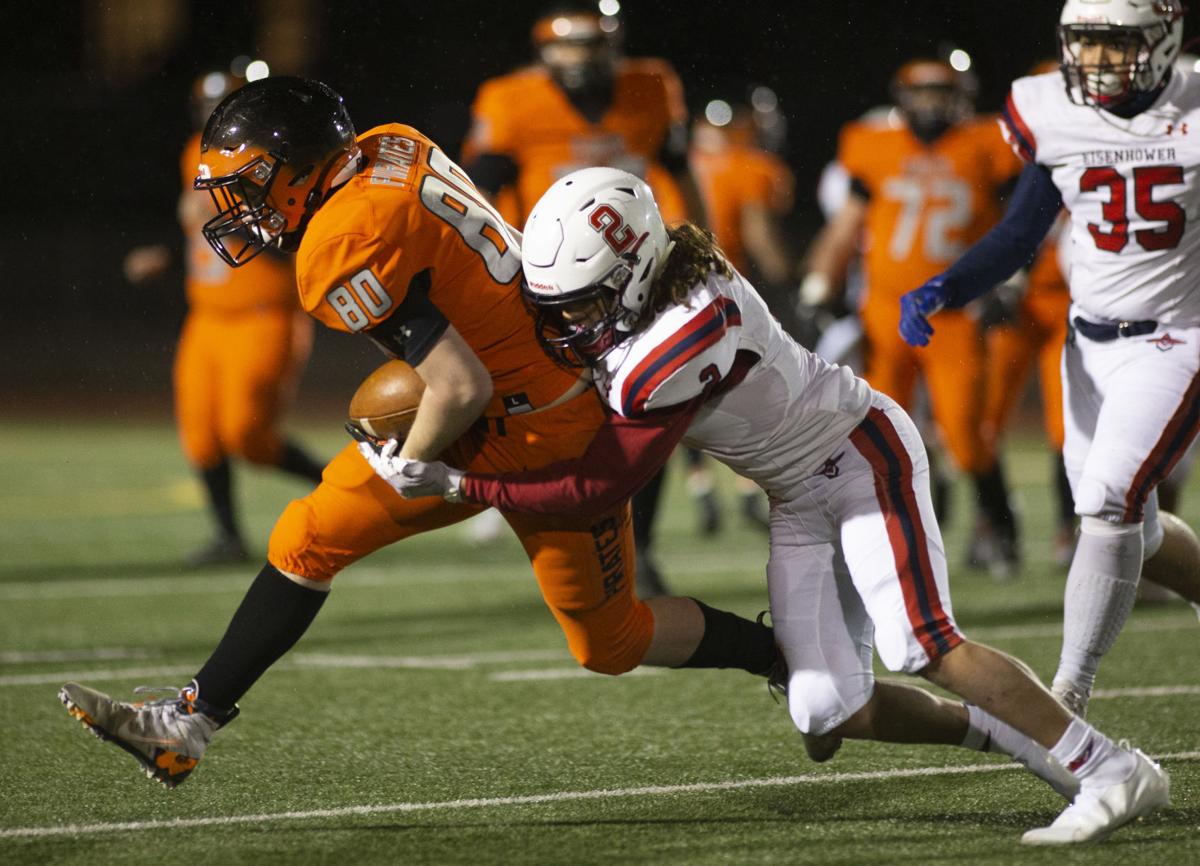 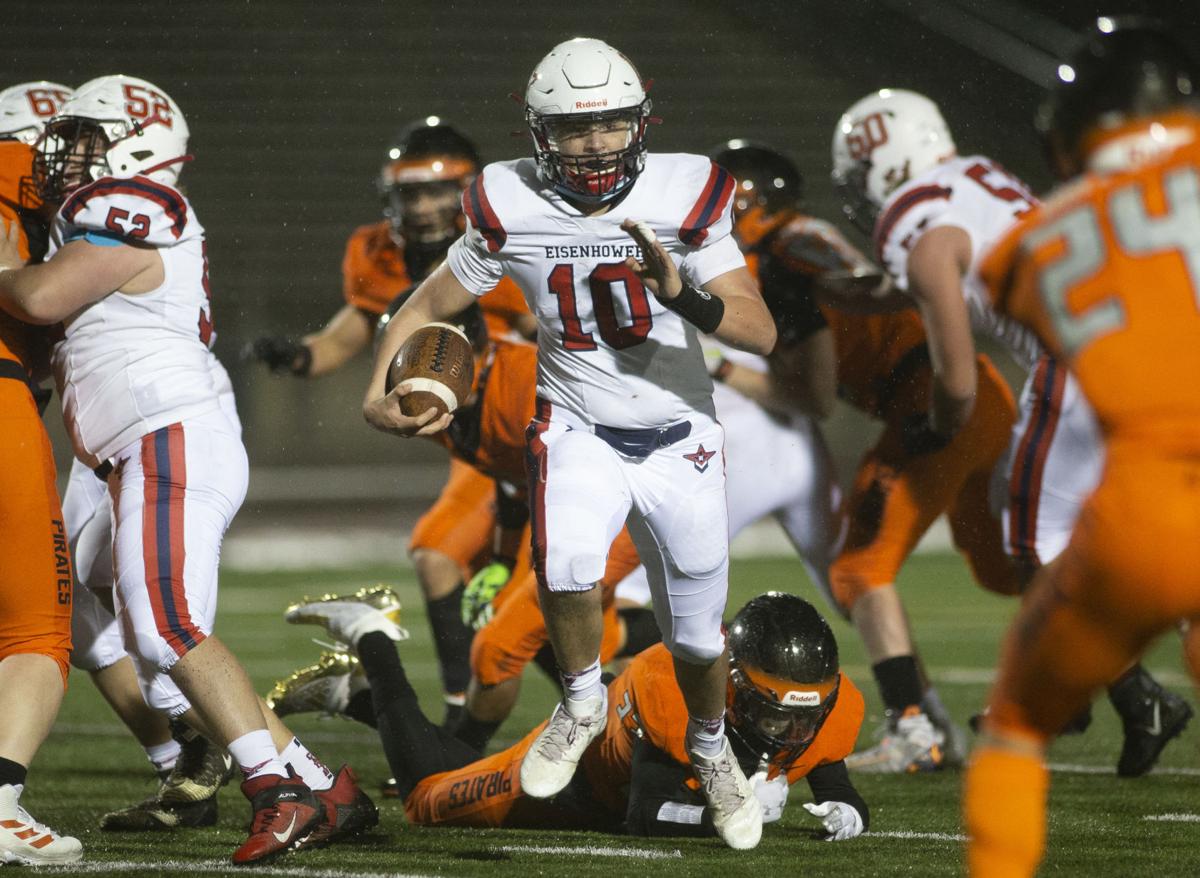 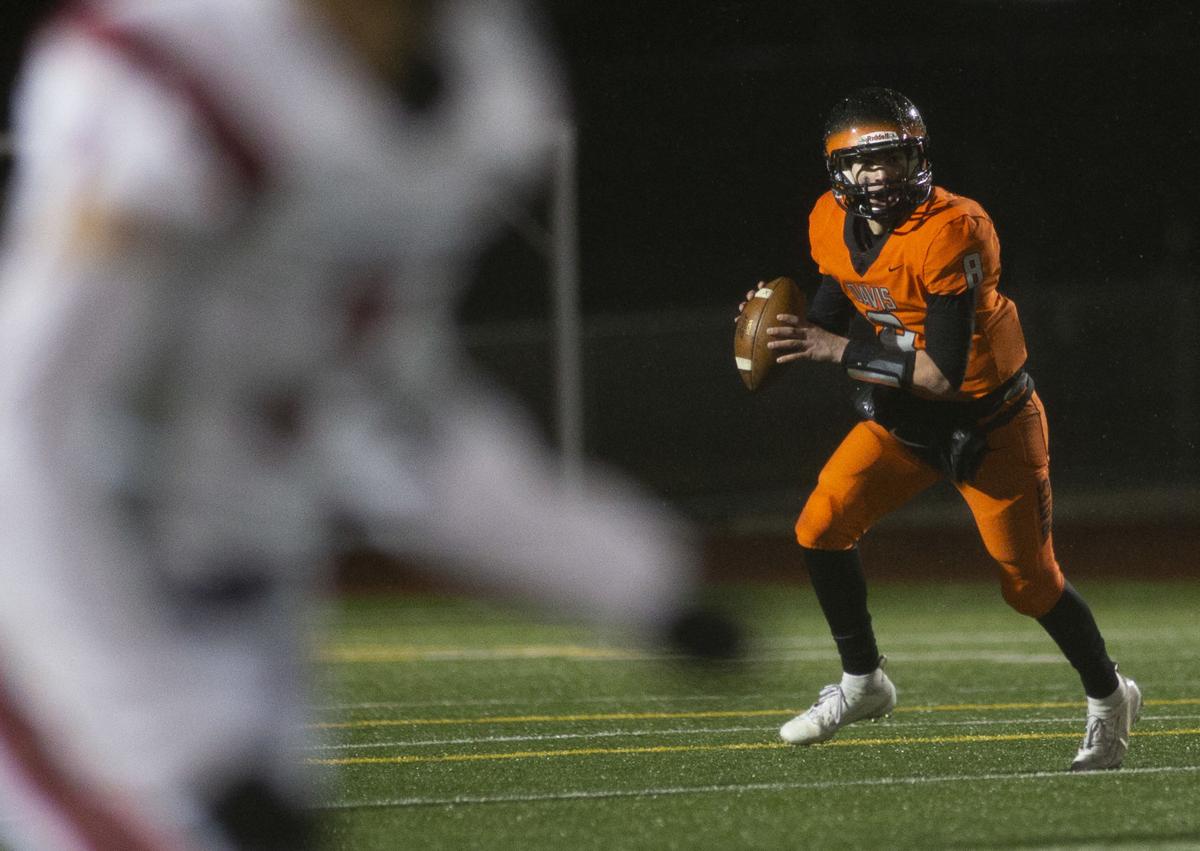 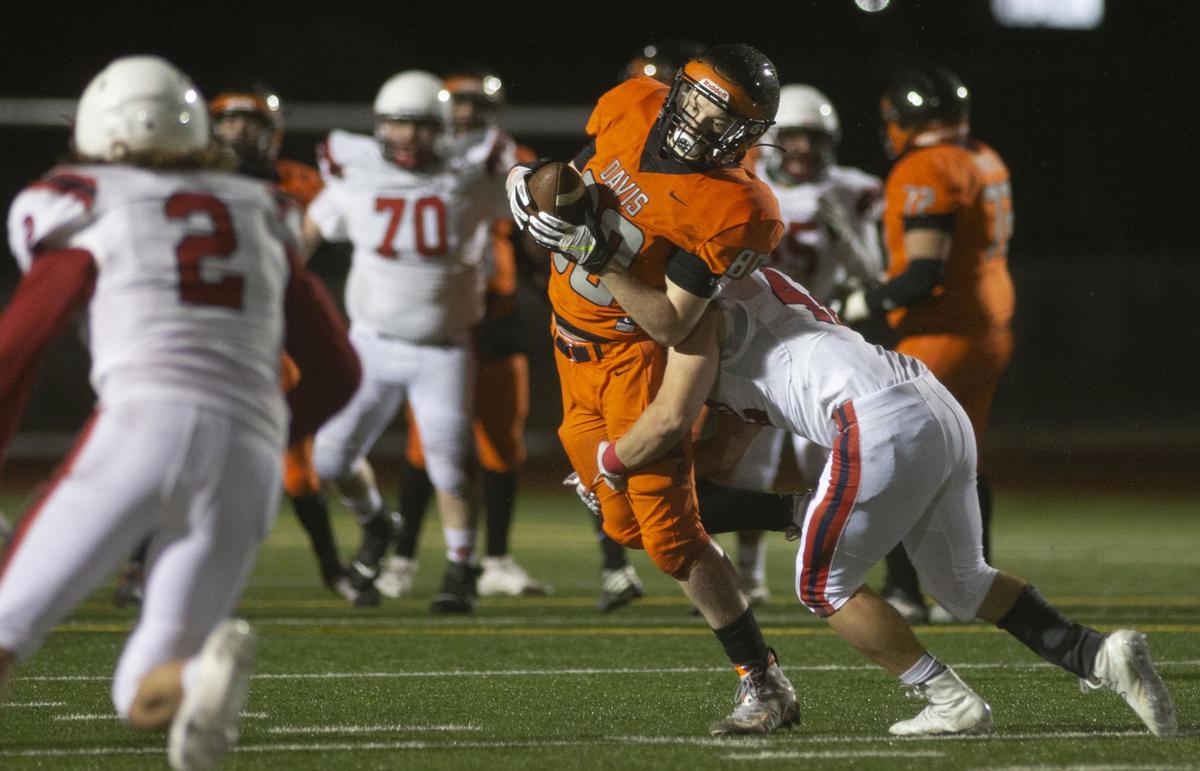 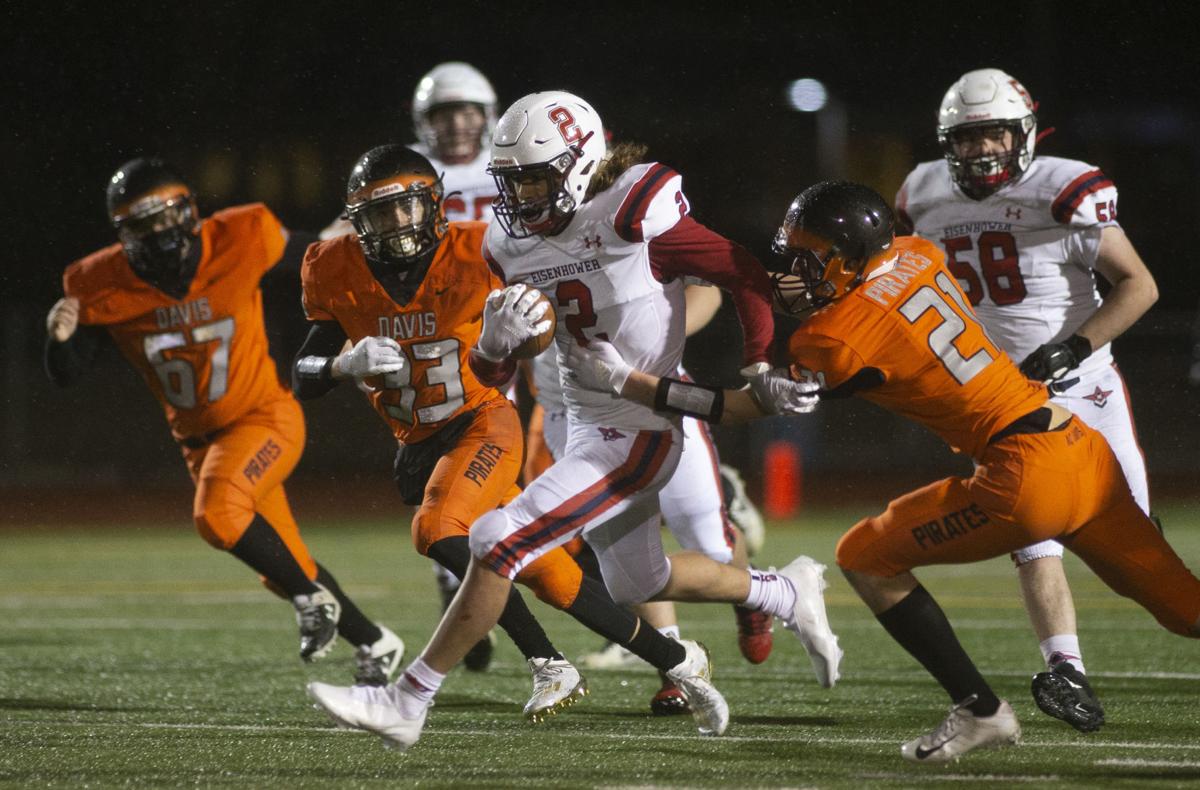 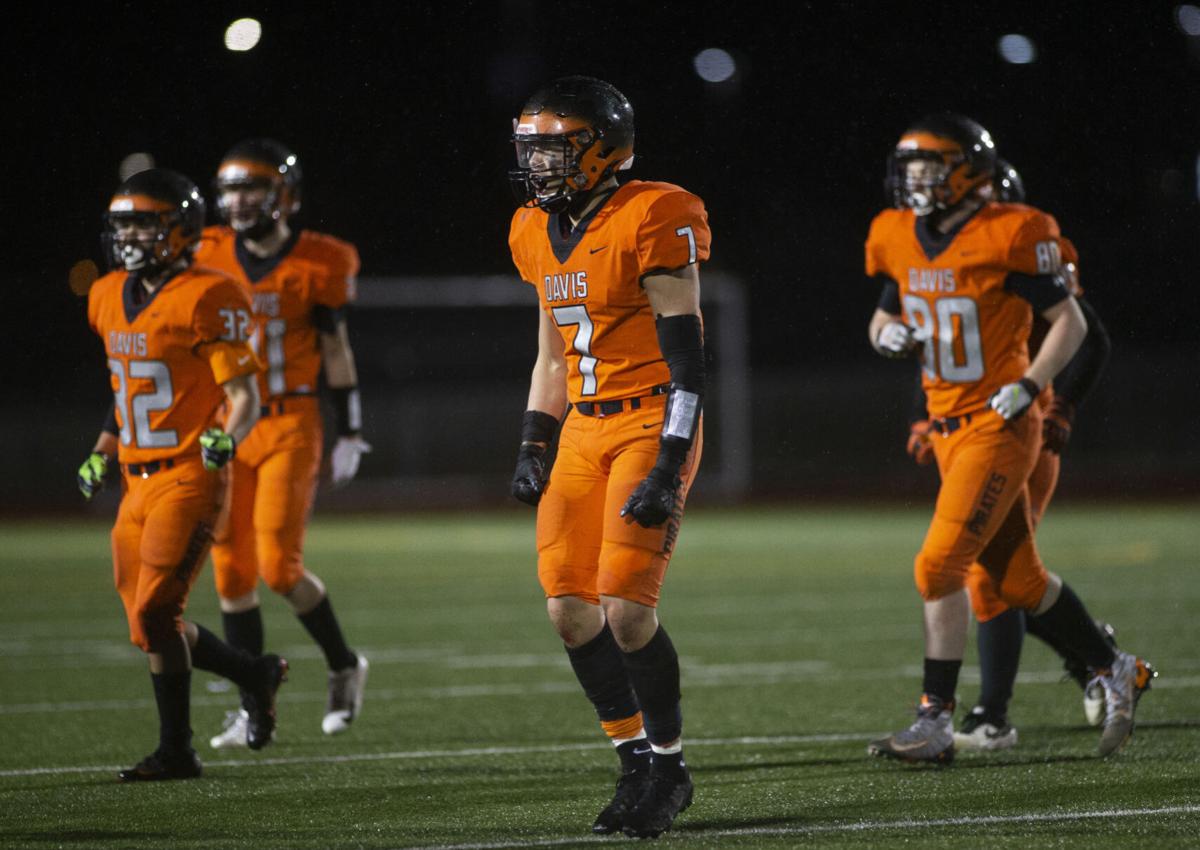 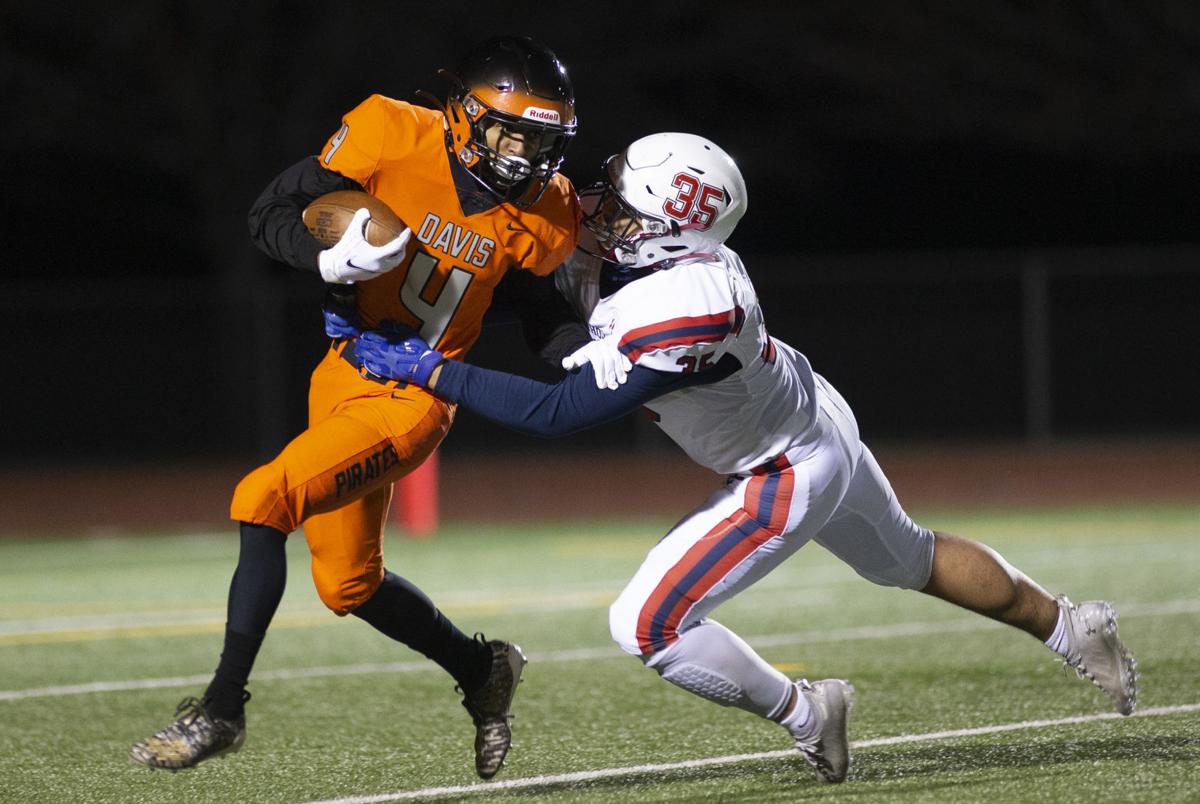 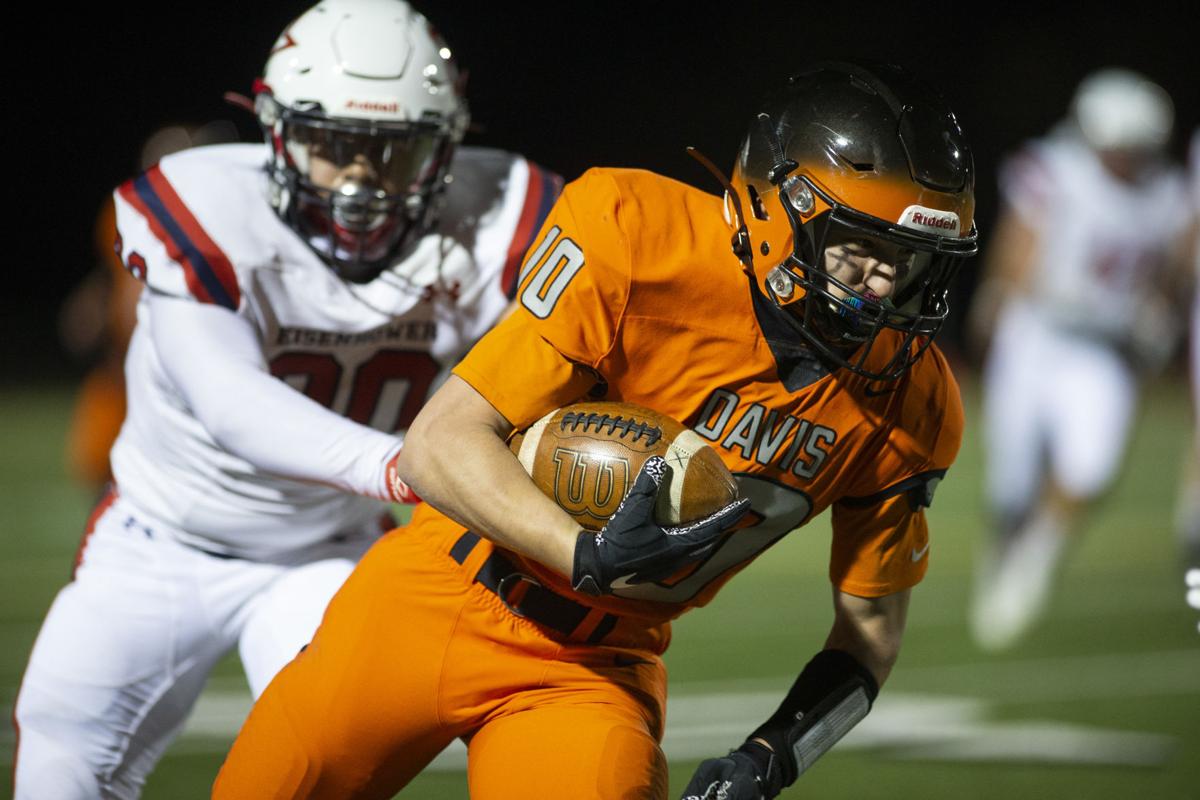 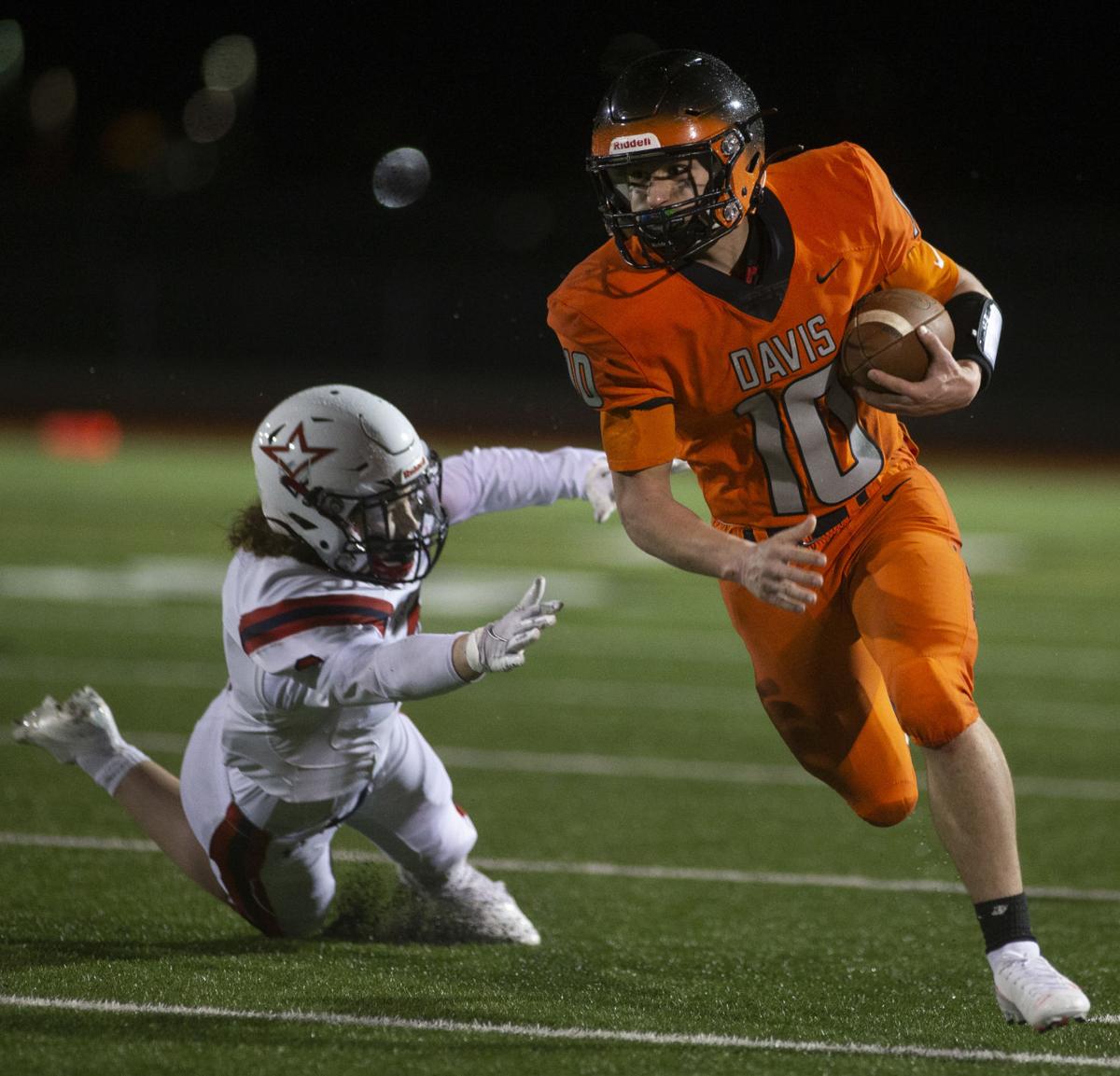 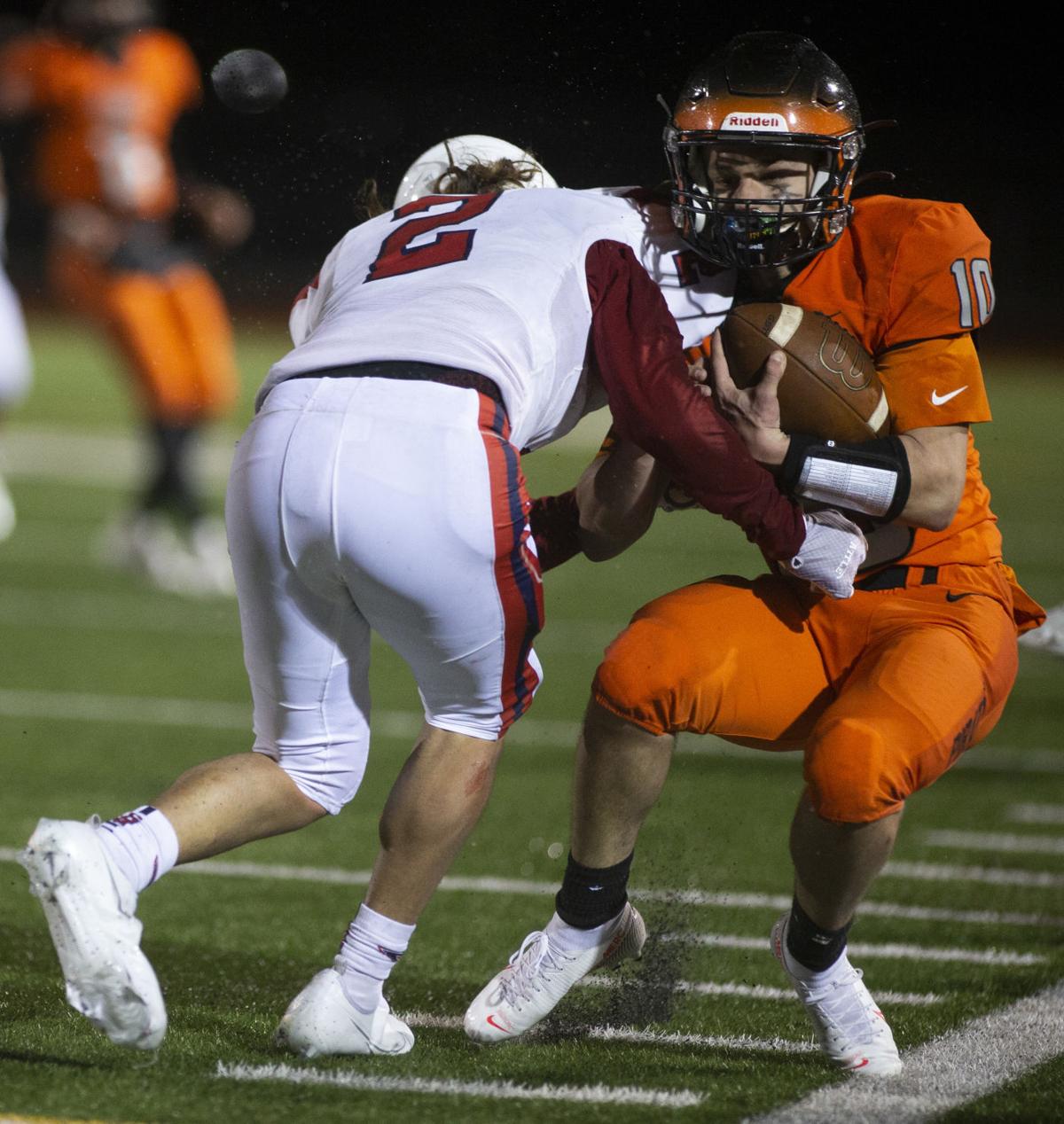 Eisenhower's Nahum Garent, right, and Stevan Rodriquez, left, celebrate after the pair connected for a touchdown during a 12-6 win over Davis on Friday, March 5, 2021 at Zaepfel Stadium in Yakima, Wash.

Eisenhower's Jorge Garcia rushes for a touchdown against Davis on Friday, March 5, 2021 at Zaepfel Stadium in Yakima, Wash.

Eisenhower's offense carried most of the load in 2019, thanks in large part to a strong senior class.

As the newcomers adjust to starting roles, the Cadets defense hopes to take over as the team's strength this season. They looked ready for the responsibility Friday night, holding off Davis for a 12-6 win in the season opener for both teams.

"We did really expect to be improved on defense this year," coach Gary Jimenez said. "Got off to a little bit of a slow start in that first quarter, but then they started trusting what we're doing."

The Pirates totaled 174 of their 271 offensive yards in the first quarter, when they found success both on the ground and through the air. But Ike's Jacob Surtain came up with a key interception near his own end zone to keep Davis off the board on its first drive.

Broderik Phillips and the Cadets' defensive line continually found their way into the Pirates' backfield, including a key fumble recovery by the 6-foot-5 interior lineman midway through the fourth quarter. Middle linebacker Jose Ochoa said his confidence kept growing as Ike racked up nine tackles for loss.

Jimenez entered the night with concerns about how his team would tackle after an unusually short preseason. But Ochoa said the Cadets did what they could during a long, bizarre offseason to prepare for the physicality of a game.

"Honestly, it was kind of weird because it was so sudden," Ochoa said. "We're barely getting back into it and then just got to start practicing tackling and it's just things that comes with instincts, I guess."

Whenever Phillips or others couldn't make a stop up front, Ochoa always seemed to be there. Jimenez believes the junior could be one of the best middle linebackers in the CBBN.

Both emphasized the importance of staying aggressive against Davis quarterback Deacon Strom, who was playing the position for the first time in high school. The junior managed to throw for 221 yards and even hit Damian Corbray perfectly in stride down the right sideline for a 74-yard touchdown.

But Eisenhower came up with three interceptions, capped off by sophomore Javon Davis' second pick of the night to end the Pirates' final drive. Both teams struggled to throw the ball in a steady rain the last three quarters, leading to a scoreless second half.

It all looked quite different from the 2019 edition of the rivalry, when Eisenhower senior Jaiden Corbray threw for nearly 300 yards and ran for four touchdowns in a 41-35 win. Davis quarterback Jose Reyes scored four touchdowns of his own, but he could only stand and watch from the sideline this time due to a serious knee injury.

He's hoping to be cleared as soon as his next doctor's appointment on Tuesday, which would be a remarkably fast recovery after surgery last fall. The two-sport star still hopes to earn a scholarship to play either football or basketball.

Davis will play at West Valley next Friday and Jimenez hopes Eisenhower's offense can improve at home against Sunnyside. The defensive slugfest came as something of a surprise, and Ochoa sees it as a great building block for a group eager to take on a more dominant role.

"It feels very great to be back, too," Ochoa said. "(We've) just got to start from here and just improve day by day for the next week."