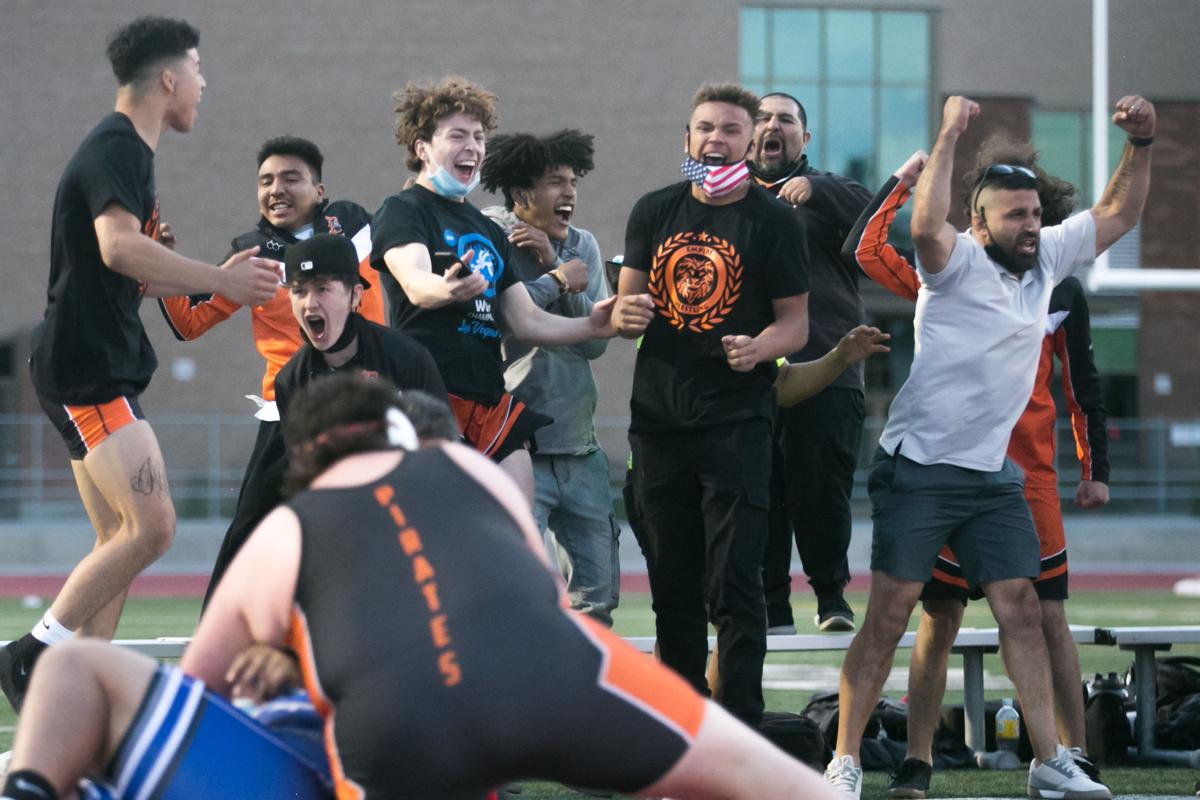 Davis teammates celebrate after Carson Linstad secured the win against Eisenhower’s Benji Rosiles in the 285-pound bout during a CBBN league dual Thursday, June 10, 2021, at Zaepfel Stadium in Yakima, Wash. 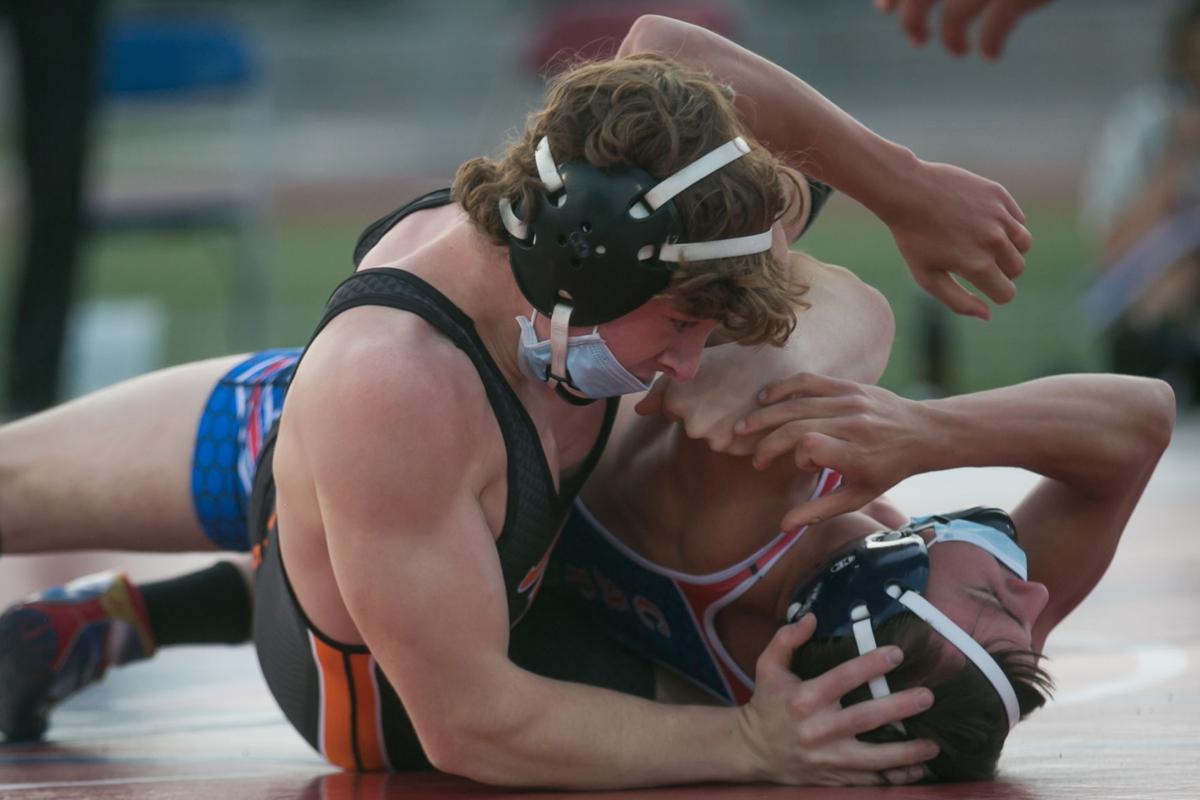 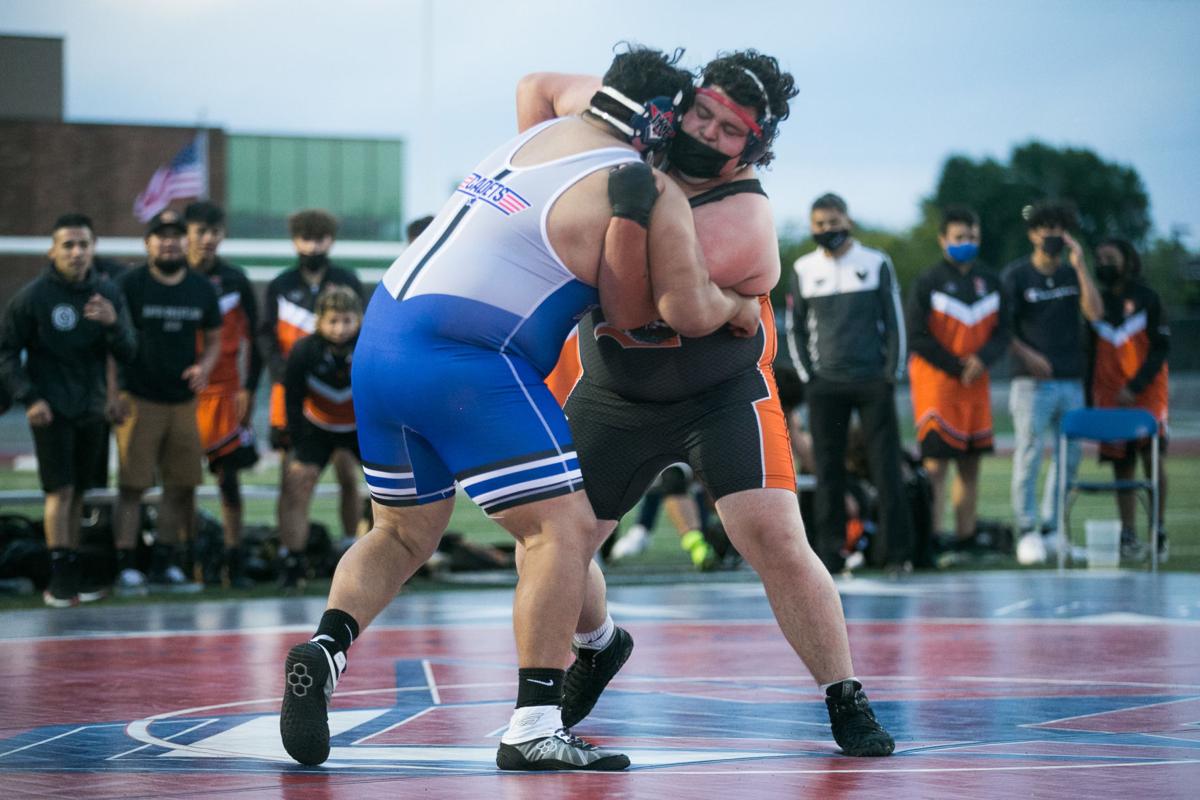 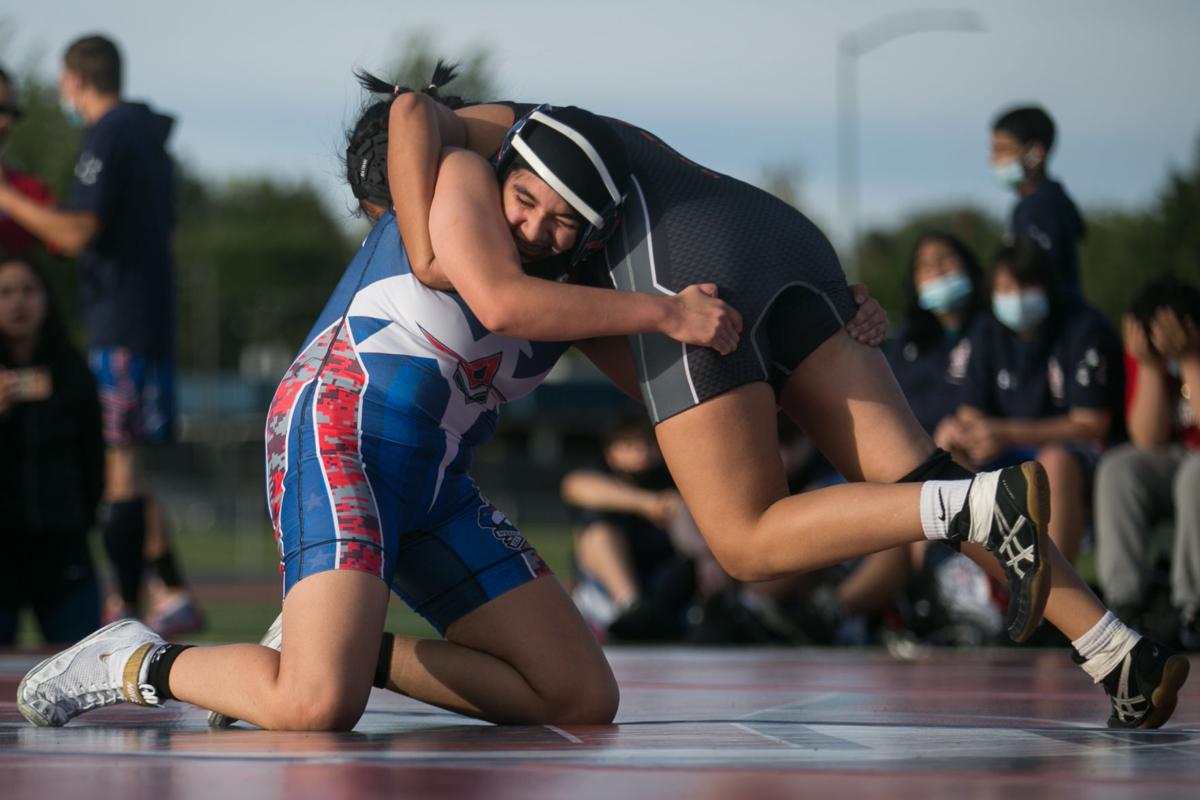 Davis teammates celebrate after Carson Linstad secured the win against Eisenhower’s Benji Rosiles in the 285-pound bout during a CBBN league dual Thursday, June 10, 2021, at Zaepfel Stadium in Yakima, Wash.

Truth is, the Davis junior didn't even expect to compete.

But when high school wrestling matches are held outside in June, plenty of strange things are obviously in play.

Linstad, who accidently impaled his left hand with a wooden sliver the day before, walked out on the mat at Zaepfel Stadium and into a pressure-packed situation — a 35-35 tie with Eisenhower and only his 285-pound match left.

"I was nervous, really nervous," he said. "All I knew is I couldn't be in the match long because my hand really hurt."

Linstad got his wish and a lot more, earning a fall in 32 seconds to lift the Pirates to a 41-35 victory to cap a heated CBBN dual that saw eight lead changes. With the Cadets up 35-29, sophomore teammate Kristian Badillo set up Linstad's finale with a third-period fall at 220.

"It was great to be a part of this and, honestly, I didn't think it would happen," Linstad said. "I didn't even bring my singlet to school but I ran into one of our coaches and he said, 'Hey, we need you. The only way we're going to win is with you.' I was just messing around with some friends and stabbed myself with a piece of wood that I pulled out myself. We got it taped up pretty good, but I'm sure glad the match didn't last long."

Linstad faced a stout opponent in senior Benji Rosiles, a state qualifier last year. But after a head-and-arm lock and throw proved unsuccessful when both wrestlers landed out of bounds, Linstad executed the same move again moments later for the decisive fall.

Eisenhower, which gave away three forfeits at 113, 120 and 152, surged ahead late for its 35-29 lead with big results from two seniors — Elyan Jimenez's first-period fall at 182 followed by Franky Rosiles' major decision at 195.

Earlier, the Cadets used three straight wins at 126, 132 and 138 to move ahead 19-12 when Davis senior Dominic Sowers turned the tide, albeit briefly. Sowers, who recorded a first-period fall at 145, is a two-time state medalist who would've been a strong contender to make the Mat Classic championship finals had a normal season been held last winter.

"That was definitely a big missed opportunity because state is always an incredible experience," said Sowers, who's headed to North Idaho College. "But I'm still happy to have this. For our seniors, it's a last chance to compete together and at least have something."

The Sowers tradition will live on at Davis. Older brother John was a three-time medalist with a state title in 2018 and younger brother Michael, a freshman, was in Thursday's varsity lineup at 195.

The Pirates, with only one previous league match last week against Moses Lake, retook the lead with the forfeit at 152 and again with Malaciah Cook's 18-3 technical fall at 170.

After Eisenhower took back control thanks to Jimenez and Rosiles, Badillo battled for his crucial win at 220. There were a total of six scoring moves in the first two periods, and Badillo held a 6-4 lead heading into the final period. He got a reversal, which quickly turned into his pinning move at 4:32.

Eisenhower will host a CBBN district tournament, which will include Wenatchee, Eastmont and Moses Lake, on June 17.