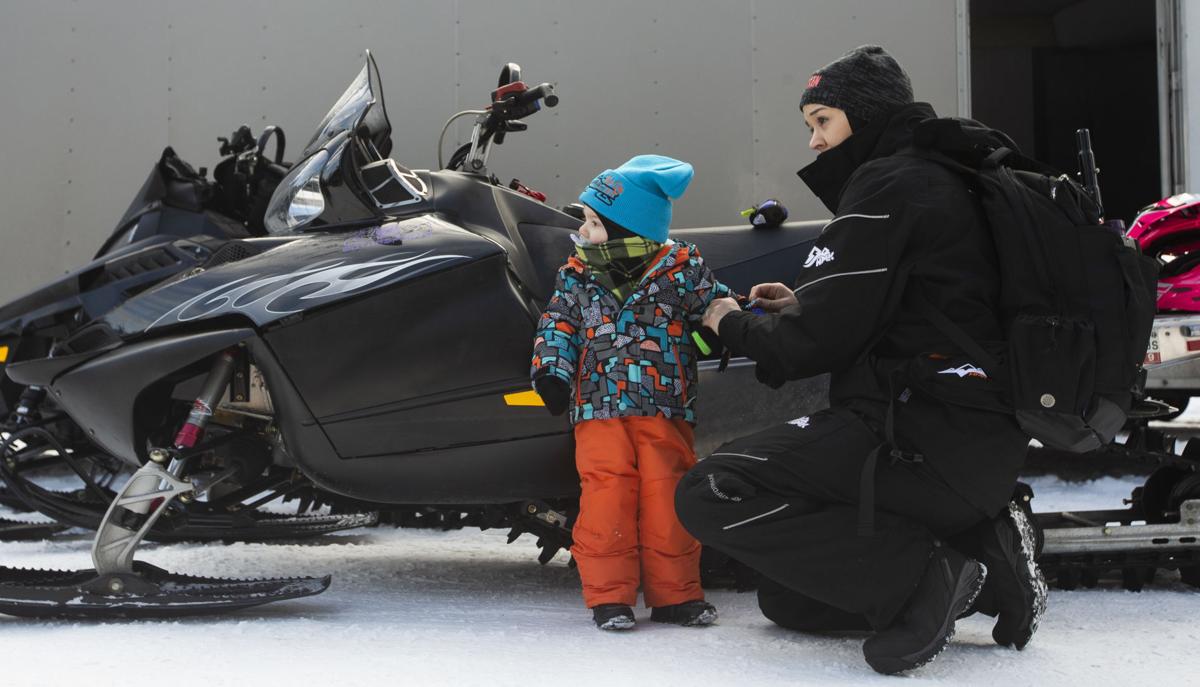 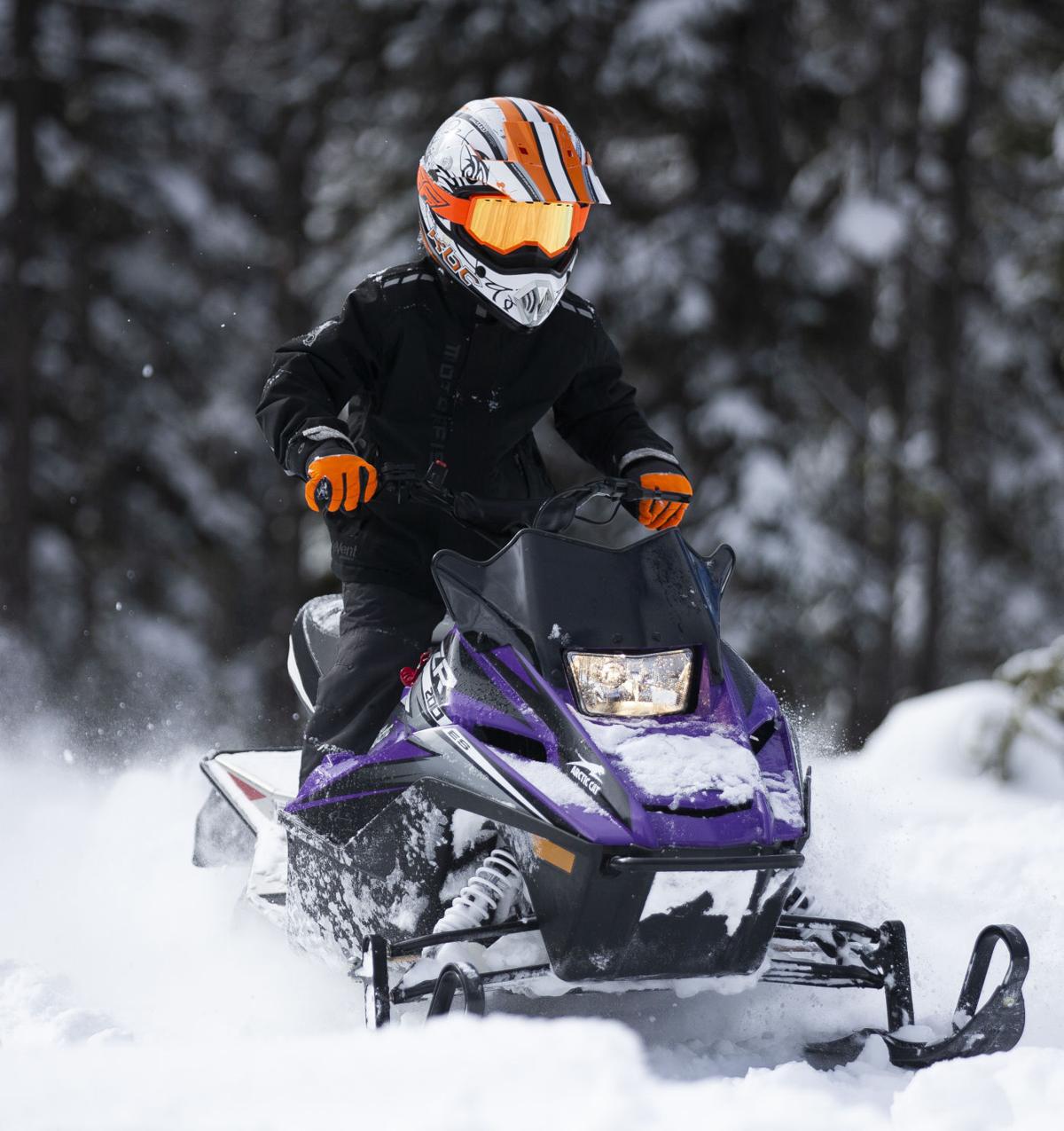 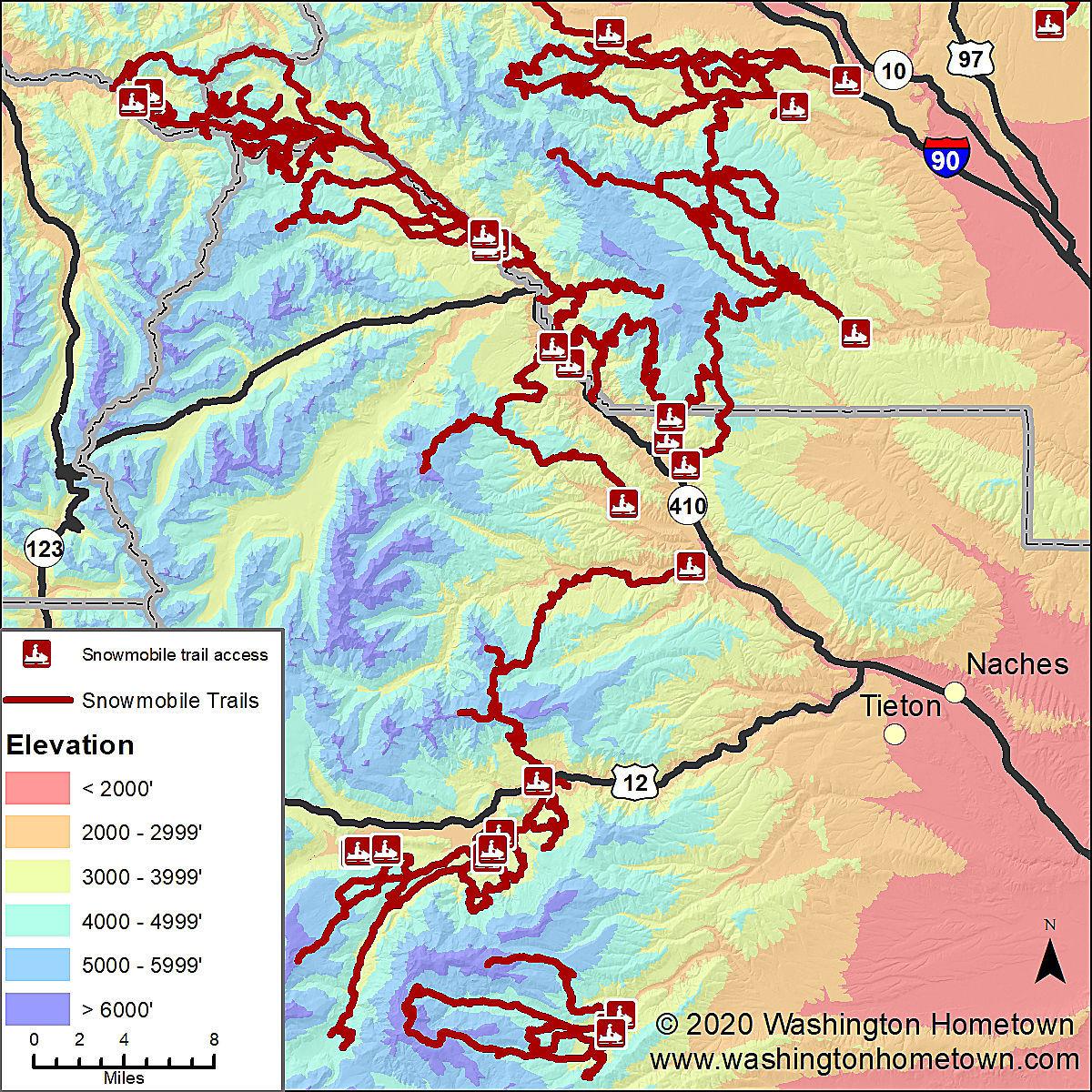 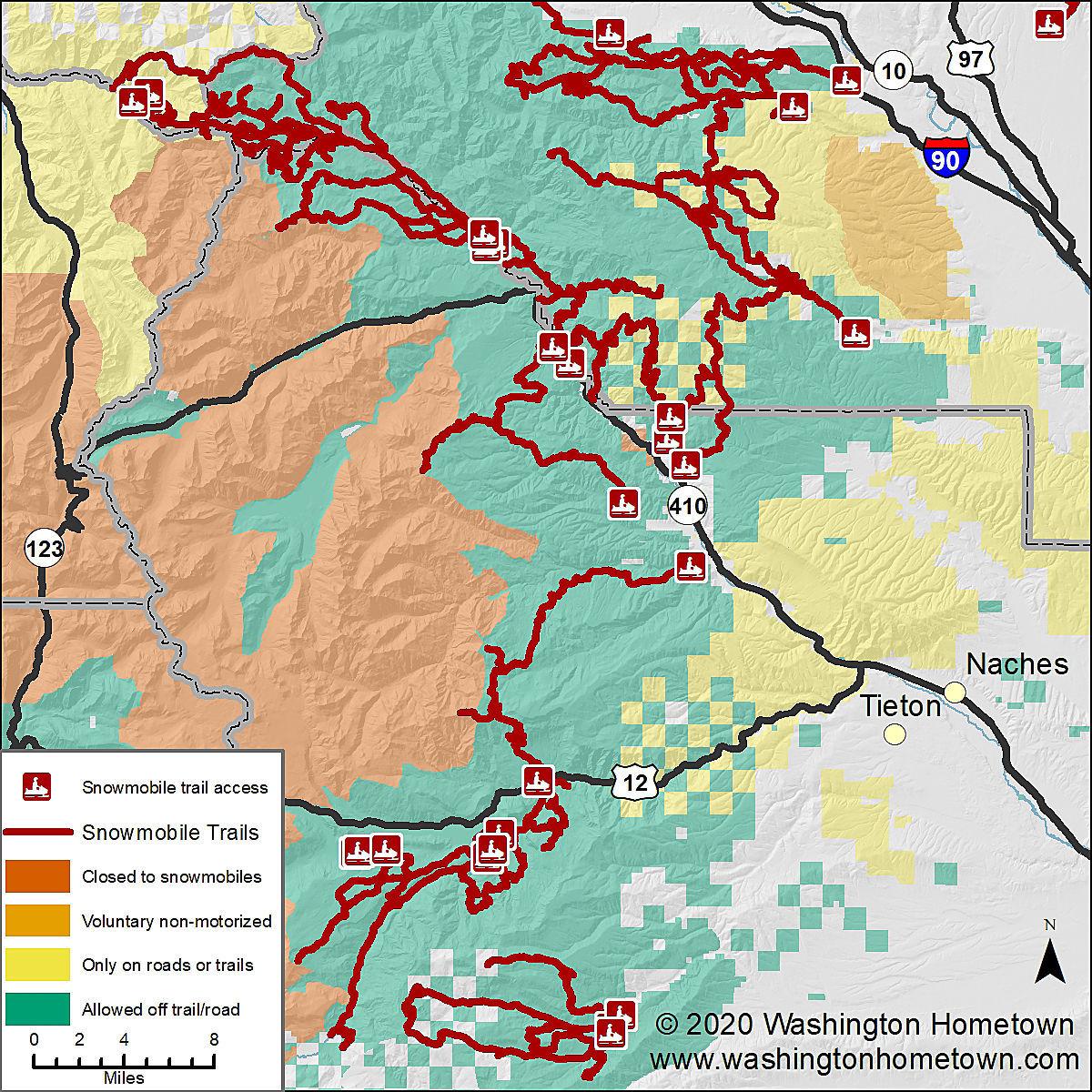 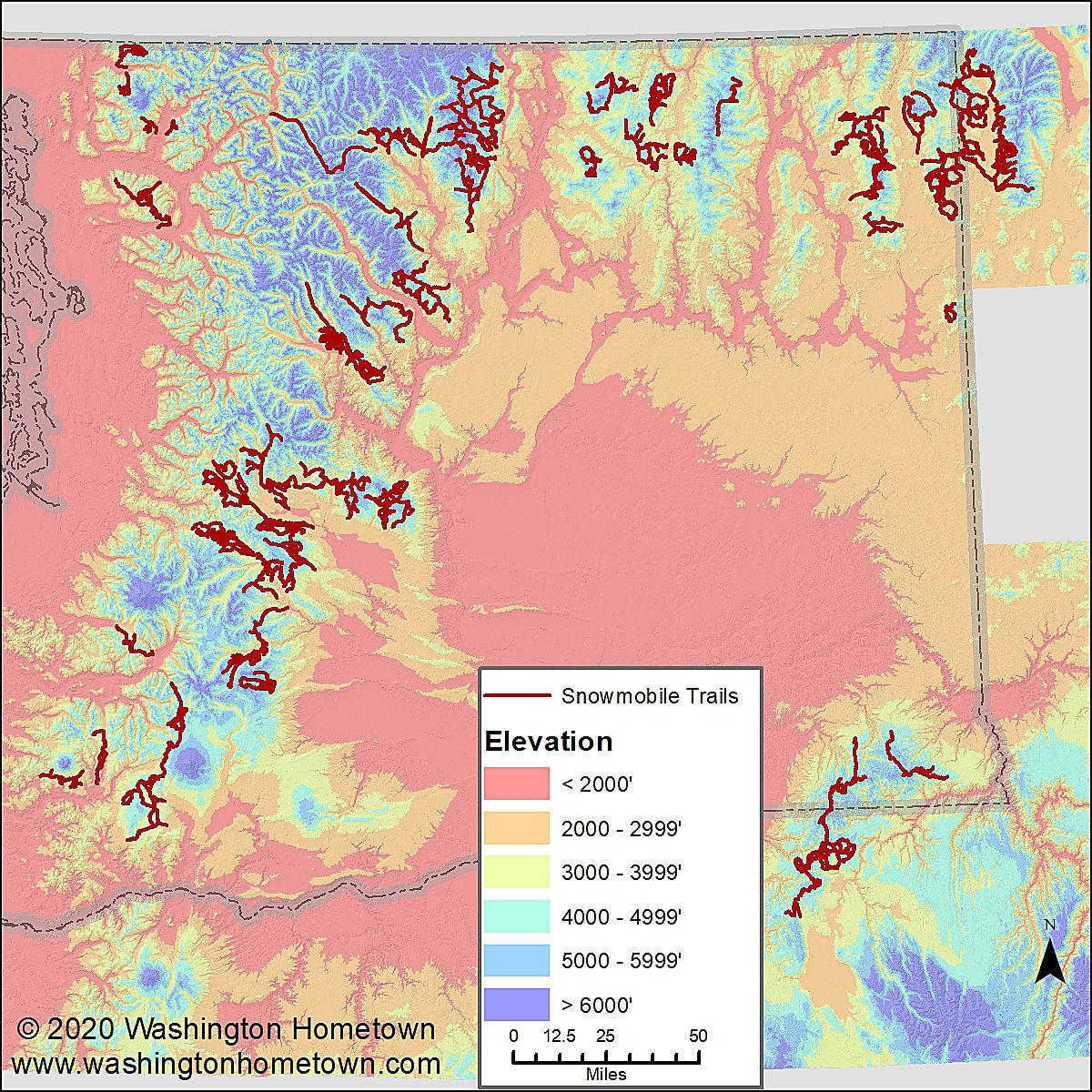 Ellensburg’s Jennifer Hackett recognized those difficulties and realized she could do something about it, thanks to a background in data mining and significant knowledge of how to present information on a map. After nearly 10 years of work, she’s looking to expand the reach of her latest app, Snowmobile WA, and eventually offer more similar resources to help other Washingtonians enjoy their own adventures in nature.

“If you want to tell the broader story you have to start digging down, and so starting in Kittitas County and then expanding out into Washington State I started trying to build that data,” Hackett said. “So I have a database where I keep information about each place, each record that I have.”

After compiling more than 15,000 recreation resources throughout the state, she’s eager to create valuable maps using Geographic Information Services, better known as GIS. Her debut app, released to app stores last winter, provides a comprehensive list of trails in Washington with valuable information about each one for potential users, such as directions and what parking permits are needed.

Hackett acknowledges she mostly cross-country skis in the winter, so she spent plenty of time talking with local snowmobiling groups, as well as those who manage the trails. That included multiple conversations with the Yakima Ski Benders, and president Rudy Classen said it seemed as though Hackett tried to speak with “virtually everybody that might be using the doggone trail.”

“It looks like from what she’s put together, she’s done an incredible job,” Classen said. “There’s a lot of trails up there. A lot of them are old logging trails and that sort of thing. Some are overgrown and can’t be used anymore.”

By cross-checking with locals, landowners, State Parks and others, Hackett managed to identify more than 3,000 miles of trails throughout the state, including 353 miles on three trail systems in Yakima County. In addition, she determined those trails were legally accessible and identified where it’s permissible to go off-trail.

The need for maps

Hackett and her husband moved to Washington in 2004 after he retired from foreign service work for the government and she resigned from a job with the Department of Defense.

Personal experiences hiking or attempting to hike with her family highlighted the need for more reliable maps. So as she completed a master’s degree in resource mapping at Central Washington and got into GIS work, Hackett chose to start her own business rather than going back to work for the government.

She discovered a diverse group of public agencies kept data on land they owned, but they rarely worked together, making it hard to see a complete picture. So she began piecing it all together and eventually created something comprehensive enough to be purchased by Washington’s Recreation and Conservation Office for the recreation analysis it must present to the Legislature.

State Parks winter operations manager Jason Goldstein said Hackett obtains some of her data from State Parks through public disclosures, providing access to up-to-date maps of groomed trails that are available on the State Parks website. Goldstein said he’s hoping those interactive maps will eventually show which areas have been recently groomed and he added they’ve recently put up drones at several parking areas, including one in the Ahtanum this winter.

Those maps and pictures can be accessed from links on the Snowmobile WA app, which identifies trails and trailheads managed by State Parks or other landowners and managers, then directs users back to the organization’s homepage. Links are also provided to weather forecasts and avalanche data, which can be especially valuable in the backcountry after heavy storms like those recently passing through the Cascades.

Classen said Hackett’s maps contain many ungroomed routes not recognized by State Parks but often used by snowmobilers, offering opportunities for exploration or loops that some users might not know existed. For areas like the Ahtanum where cellphone service doesn’t exist, offline maps can be downloaded without paying the small fee the app charged last winter.

“I would feel really bad if somebody, if the only reason they didn’t download the offline apps is because of the cost and then they get into trouble,” Hackett said. “So I just felt better if they’re free, then it’s your choice as to whether or not you have them.”

The relatively small amount of resources needed for snowmobile maps and her past work with local groups to keep trails open, particularly on new lands bought by The Nature Conservancy, made it an obvious choice for the first app. Classen said many of the trails should translate directly to what Hackett wants to be her next app, for Off Highway Vehicles.

If all goes well this year, Hackett hopes to add at least one full-time employee and launch 13-14 different maps for a variety of activities.

Those will include hiking, mountain biking, horseback riding, boating, fishing, wine tours, camping, and places to hike with dogs, among other things. Hackett said she’s already enlisted part-time help from some recent graduates with GIS experience and even a niece who works as a vet tech, and ideally she’d be able to hire someone whose full-time job would be checking with sources to ensure all the information stays up-to-date.

She largely abandoned initial plans to sell recreation data to other organizations, instead opting to seek out businesses that would be interested in appearing on her maps, either as destinations or simply as sponsors. Through those efforts, Hackett believes she can keep the apps free for anyone to use.

No one map will include all of her data, because Hackett doesn’t want to overwhelm users and emphasized she’s not trying to be the only resource people use. She encourages outdoor recreation users to always bring supplementary paper maps and treat her apps as just one tool of many to tell the complex story of Washington’s sometimes hidden gems.

“My goal is to offer living wage jobs, to make a living wage myself, and to offer something that’s really beneficial to the community,” said Hackett, who plans to stay with her husband in Ellensburg for the rest of their lives. “This is my second career so I can afford to take the time to really meet my visions, which is to give something back to the community to help people discover their next adventure.”