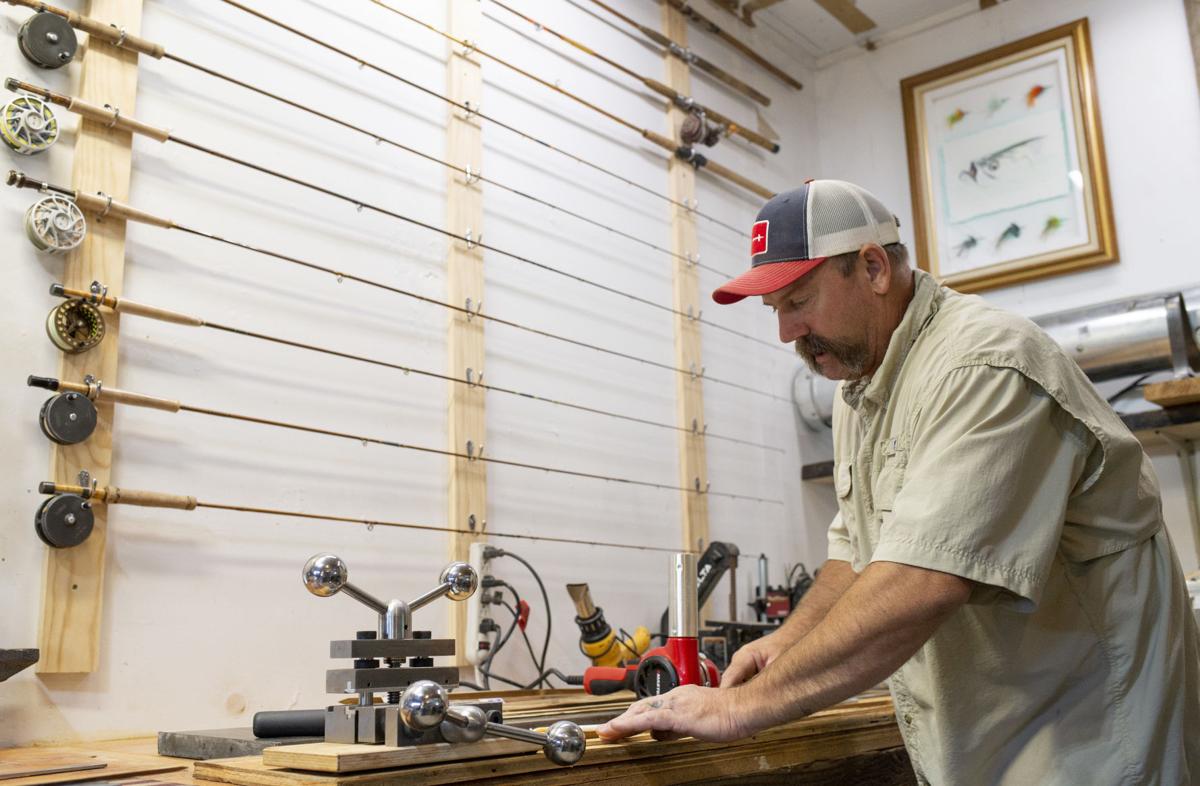 Kevin Sugden, owner of Bighorn Bamboo Rods and Guide Service, scrapes a bamboo strip while making a fly fishing rod in his shop Wednesday in Selah. 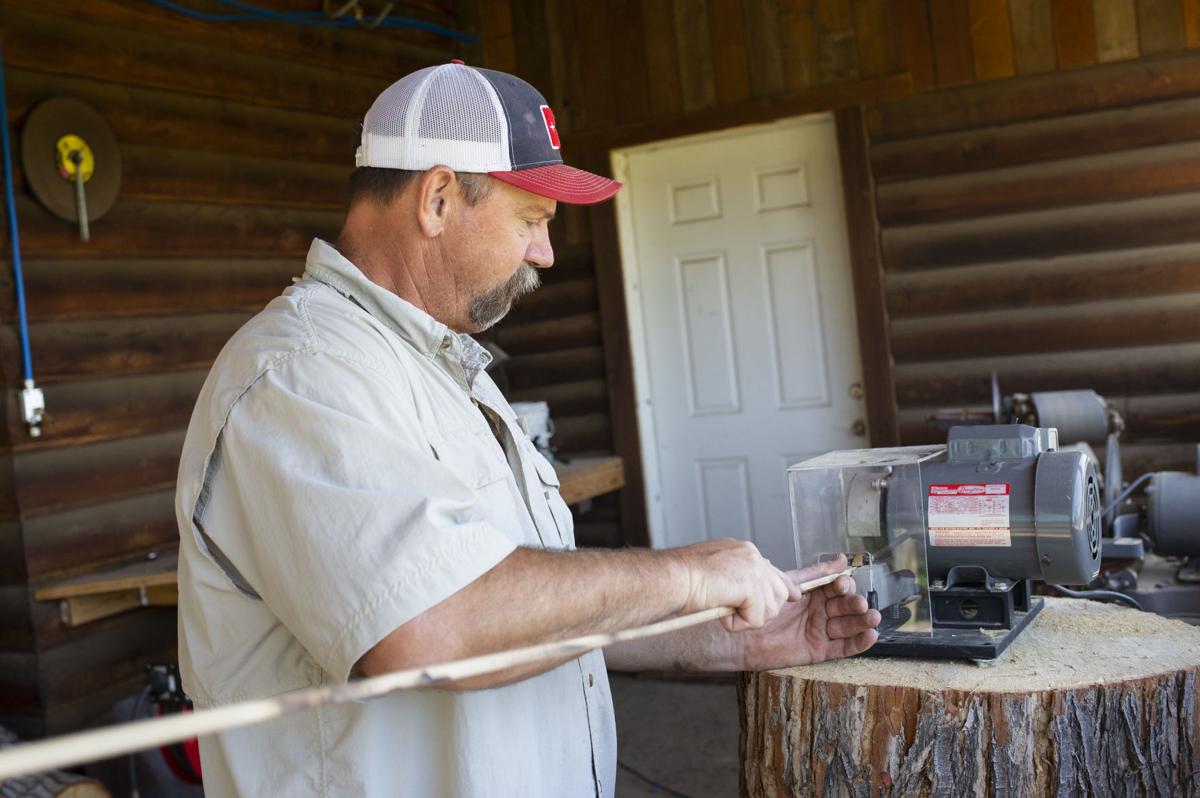 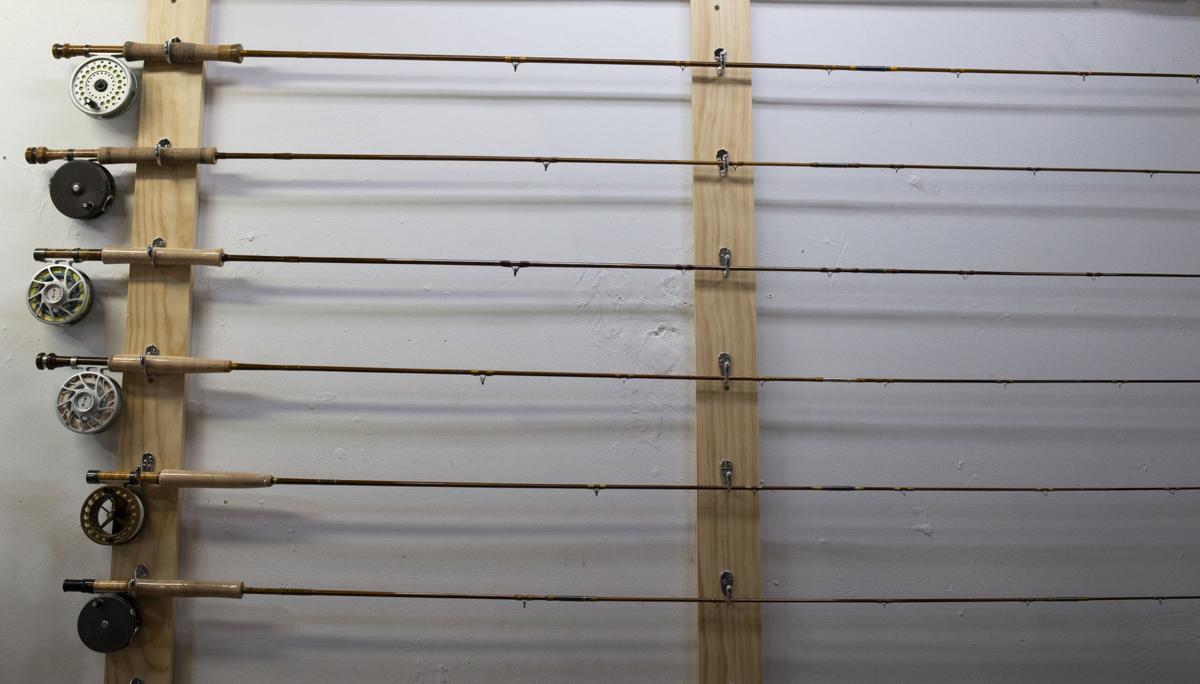 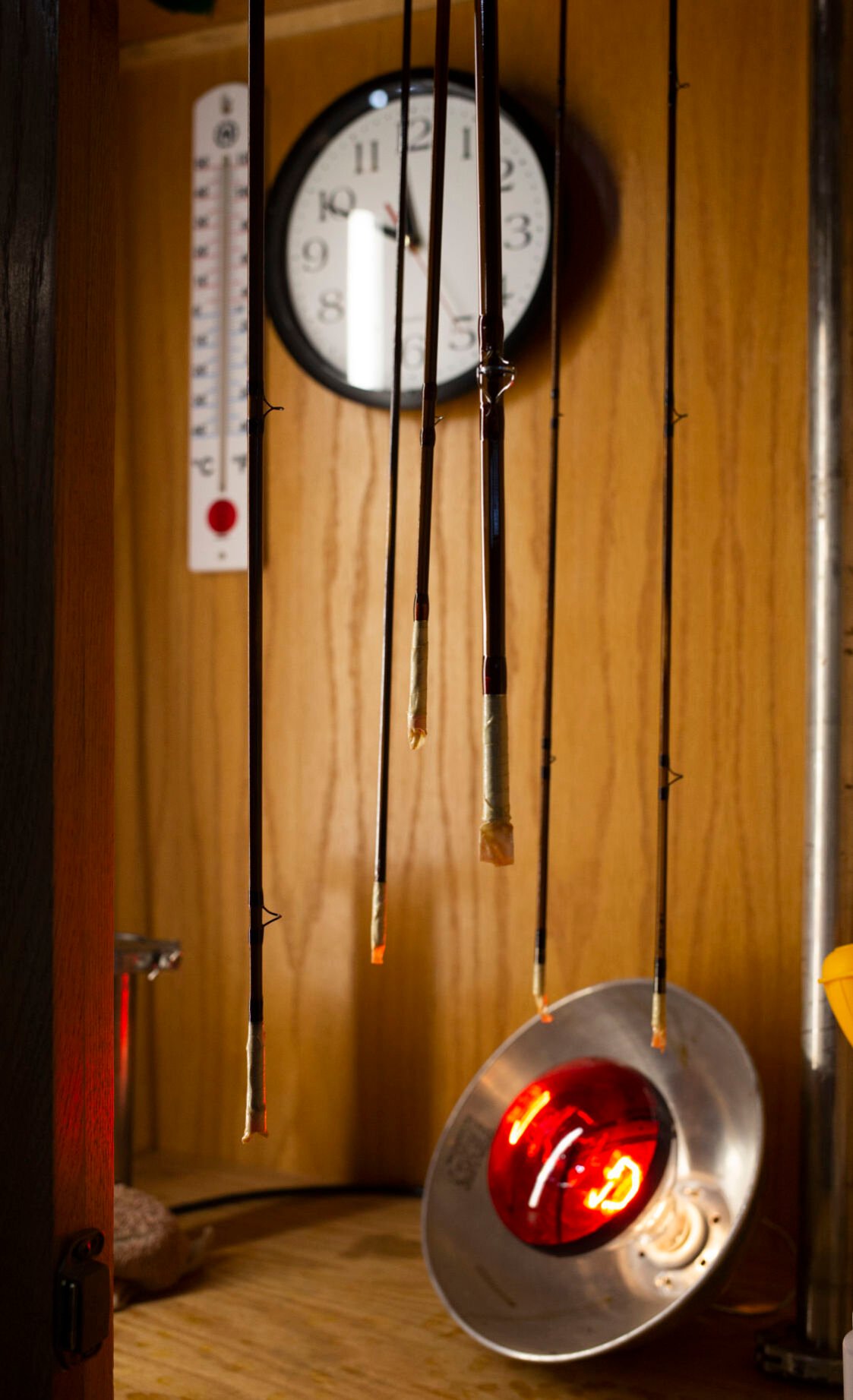 Bamboo fishing rods hang in a drying cabinet after being dipped in spar urethane in Kevin Sugden's shop Wednesday, July 21, 2021 in Selah, Wash.

Kevin Sugden, owner of Bighorn Bamboo Rods and Guide Service, scrapes a bamboo strip while making a fly fishing rod in his shop Wednesday in Selah.

Bamboo fishing rods hang in a drying cabinet after being dipped in spar urethane in Kevin Sugden's shop Wednesday, July 21, 2021 in Selah, Wash.

Many who fish with split-cane bamboo fly rods say they allow a depth of feeling when casting or reeling in a fish that just isn’t possible with today’s more common graphite rods.

When Selah’s Kevin Sugden experienced that feeling while using a bamboo rod for the first time two years ago, he knew almost immediately it would change his life. The 50-year-old firefighter and paramedic for the Pasco Fire Department not only switched almost exclusively to bamboo when fishing, he dedicated himself to the time-consuming craft of building rods.

“You really have to let the rod load with the line, feel it and then come through with your forward cast,” Sugden said. “Graphite is all about timing. Bamboo’s all about feel.”

He's set up a workshop outside his Selah residence, where various machines and tools are scattered around the room, and long tubes of bamboo sit up on a shelf near the ceiling. Finished rods rest inside a cabinet where Sugden can turn the temperature up to 120 degrees to dip the rods in a spar urethane varnish.

Each rod takes 40-50 hours to make, and he said every one seems to take a little longer than the last as he strives to improve his process. He's already built 31 rods this year and sold half a dozen since he started Bighorn Bamboo Rods and Guide Service, fueling a passion shared by others for the last 150 years.

But as lighter, cheaper and faster fiberglass, then graphite rods took over the market, bamboo rods began to fade away. All the large companies either went out of business or changed their products, but the Internet and books written by experts made handcrafting bamboo fly rods more accessible.

Significant barriers still exist, starting with the challenge of acquiring the unique Tonkin Cane bamboo found only in a small region of China. Sugden said that became even more difficult when the Covid-19 pandemic disrupted supply lines, but he's managed to find a reliable supplier.

The first rod he created was put together entirely by hand in nine days, during an intense one-on-one class with Pullman's Scott Nillson, the author of a book titled "Crafting a Bamboo Fly Rod: A Practical Guide to Making Your First Bamboo Fly Rod.

Over time Sugden's added his own personal touches to the long process of turning each tube, or culm — generally about 12.5 feet with a 2 to 2.5-inch diameter — into an efficient, aesthetically pleasing fishing rod.

Sugden said perhaps someday soon when he no longer works a 48-hour shift each week in Pasco, he'll focus more on building all of his own components, though arthritis and the ease of machines will keep him from making everything by hand. For now, he's happy to spend long hours in the workshop, always building several rods at a time so he can switch tasks whenever it's necessary to keep his concentration.

"It's tedious," said Sugden, who estimates he goes fishing about 100 days a year and occasionally works as a licensed guide. "There's about 100 different individual processes that go into building a rod, which I love because I'm very meticulous."

Eventually, Sugden hopes his hobby will turn into a profitable business in a trade where rods can sell for thousands of dollars.

Between the $175 cost for materials and the extensive labor cost, Sugden said he's not earning much revenue from his single tip rods priced at $850 and the more traditional two-tip rods at $1,000. Sometimes when he completes a rod but decides it doesn't feel right, Sugden will end up giving it away to friends.

Each one provides a different feel for every user, and Sugden said he'll build custom rods based on how and where they'll primarily be used. He believes a good bamboo rod would be great for someone new to fly fishing, since it allows a greater margin for error than a graphite rod.

Toppenish repairman Dennis Evans, who restores rods made from bamboo as well as other materials, said he'd still recommend graphite rods because too many bamboo rods today are made cheaply and bend easily. Sugden acknowledged that can be a challenge and said he's learning new methods to make his rods more durable, creating a product he can be proud of as he works toward the goal of becoming an expert rodmaker capable of passing along skills to the next generation.

"I'm still light years away from being one of those guys," Sugden said. "I want to build the best rod that I can build and I want to keep resetting the bar."