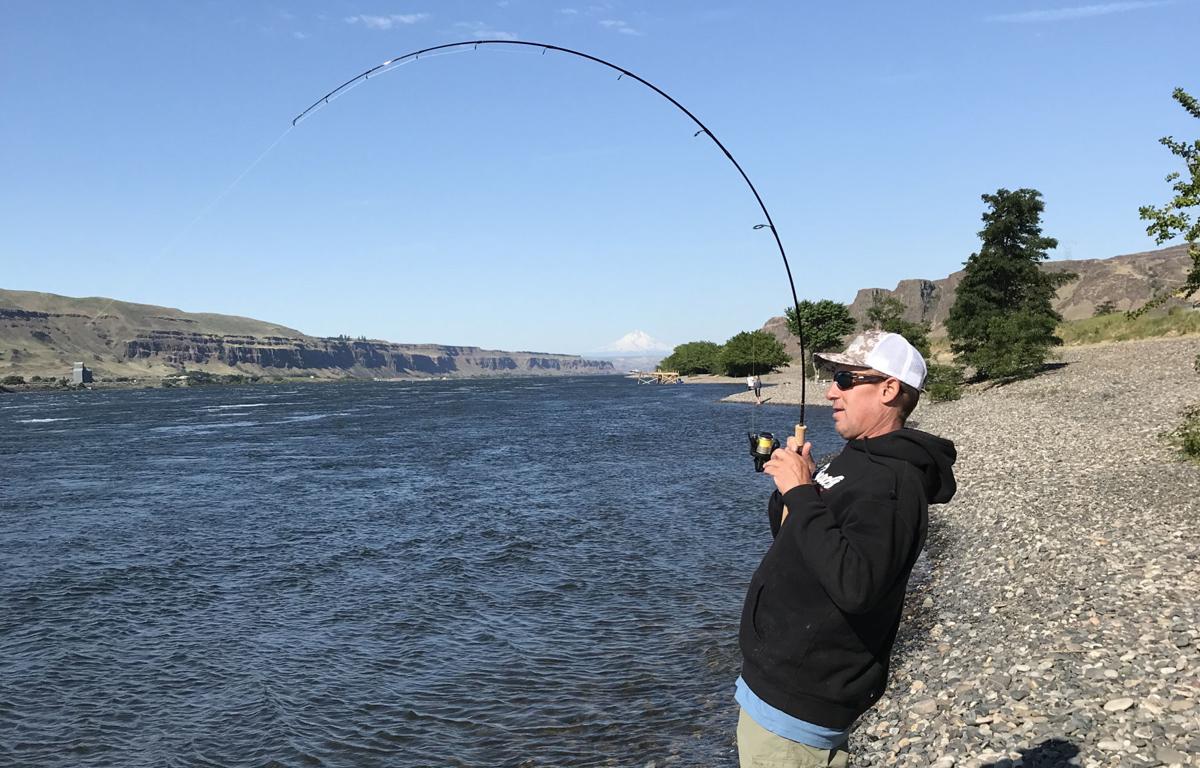 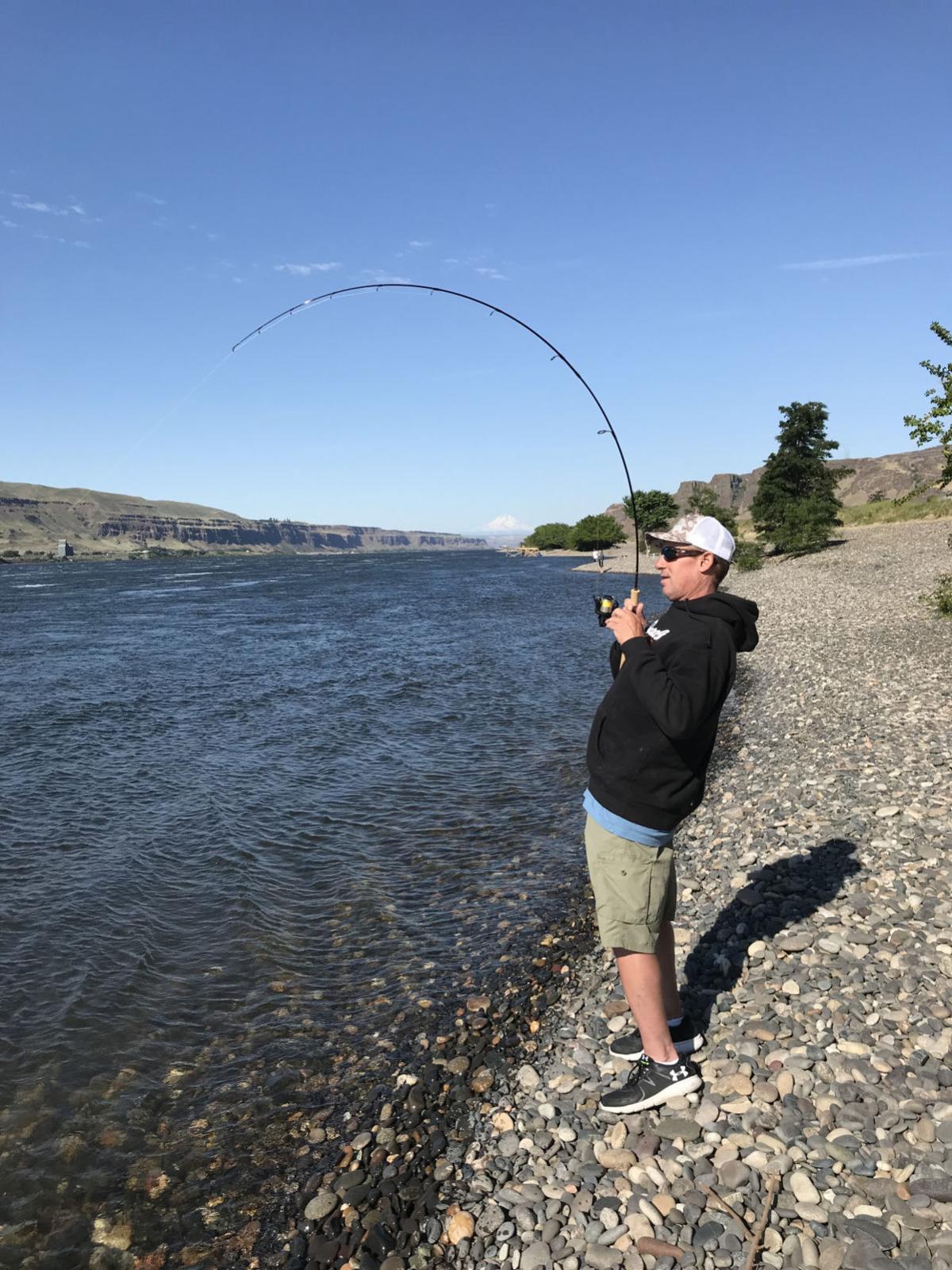 About this time of year a few friends and I travel down to the Columbia River to fish for shad. It has become an annual tradition. The reason I enjoy it so much is it is kind of old school fishing. All you need is some simple gear and you’re fishing, with a pretty good chance for success.

Right now, there are around a hundred thousand shad a day coming up the Columbia, headed to wherever it is shad go to spawn. Already this year there are a million fish over Bonneville Dam, which gives shad anglers plenty of fish to target.

Anglers have been fishing for shad for a few weeks in the waters below Bonneville. And they’ve been catching fish. It can be crowded along the banks where the shad anglers fish below the dam, so in our crazy coronavirus world, it’s best to take precautions.

Upriver, in the waters below John Day dam, there is much more room to spread out and stay socially-distanced, while still having a crack at a shad, or two, or more. Some days, it is not uncommon to catch dozens and dozens of the feisty fish.

Thick-sided, with all kinds of energy, a shad will flat give you a tussle. Especially on light spinning gear or on a fly rod.

The migrating masses of the hard-fighting fish swim relatively close to the shorelines as they make their way upriver. That gives bank anglers a real shot at them.

Shad darts are a favorite of shad, and shad anglers. But other small lures will work as well. Last year, after I snagged and lost about my 17th shad dart, I switched over to a small gold Hildebrandt Little Shaver spoon and banged several more shad. Other little spoons such as a Dick Nite or a Triple Teazer will work too, as long as they are gold, or have some gold on them.

The small shad darts, which are just a little jig with a colored head, are probably the most popular lures though. My buddies and I have had good success with the red and white, and the green and yellow colored darts. But the hook on the dart needs to be gold.

The secret to bank fishing success for shad is to make sure you get your dart or lure down near the bottom as it drifts downstream. The small darts are not nearly heavy enough to fish without weight, so a small length of lead, or a slinky-style weight, will do a good job of getting the dart down in the current.

Make a cast about two-thirds upstream, and let the lure and weight drift downstream, feeling for the weight to tick along bottom as it goes. Yes, you will get hung up, and you will lose some gear. It just comes with the territory when fishing for shad. If you’re not losing a rig once in a while, you’re not going to have much success. So take lots of weight and plenty of lures.

When you do hook up with a shad, be ready for a battle. The fish, which average around two pounds, will use their deep bodies to turn in the fast current and pull like crazy. Shad look like small tarpon and fight like them too.

Another option for catching some shad is to fish from a boat. Find water that isn’t too fast or too deep, 10 to 20 feet will work, and either troll slowly upstream or anchor up and let the current take your gear downstream.

Last year I fished with Jacob Munden down below McNary Dam, and we caught fish after fish, trolling in a fairly shallow stretch of the river just below the dam.

Some anglers will use a downrigger to get the shad dart or small spoon down to where the shad are swimming near the bottom, and others will use a diving plug, such as a Mag Lip or a Hot-N-Tot to take the dart down into the current. The dart or spoon is tied to about three feet of leader, which is tied to the belly eye of the plug being used to take the rigging down via the force of the current.

Over the years we have had good success fishing from a boat for shad near Umatilla during the last couple weeks of June. With the run coming now, it looks like that timing might be just right.

If you get into them, it is easy to catch a five gallon bucket full of shad. We normally just catch and release them though, as I’ve never been motivated enough to try to figure out what works best for cooking the extremely bony fish. Many other anglers will keep the shad they catch, and while a few will bake the fish, most will pressure cook them, sometimes after smoking them. I have eaten canned shad and it was actually very tasty.

There are a million shad on their way up the Columbia at this very moment, with likely another million or two right behind them. Right now is prime time to fish for these unique, and fun-to-catch fish.