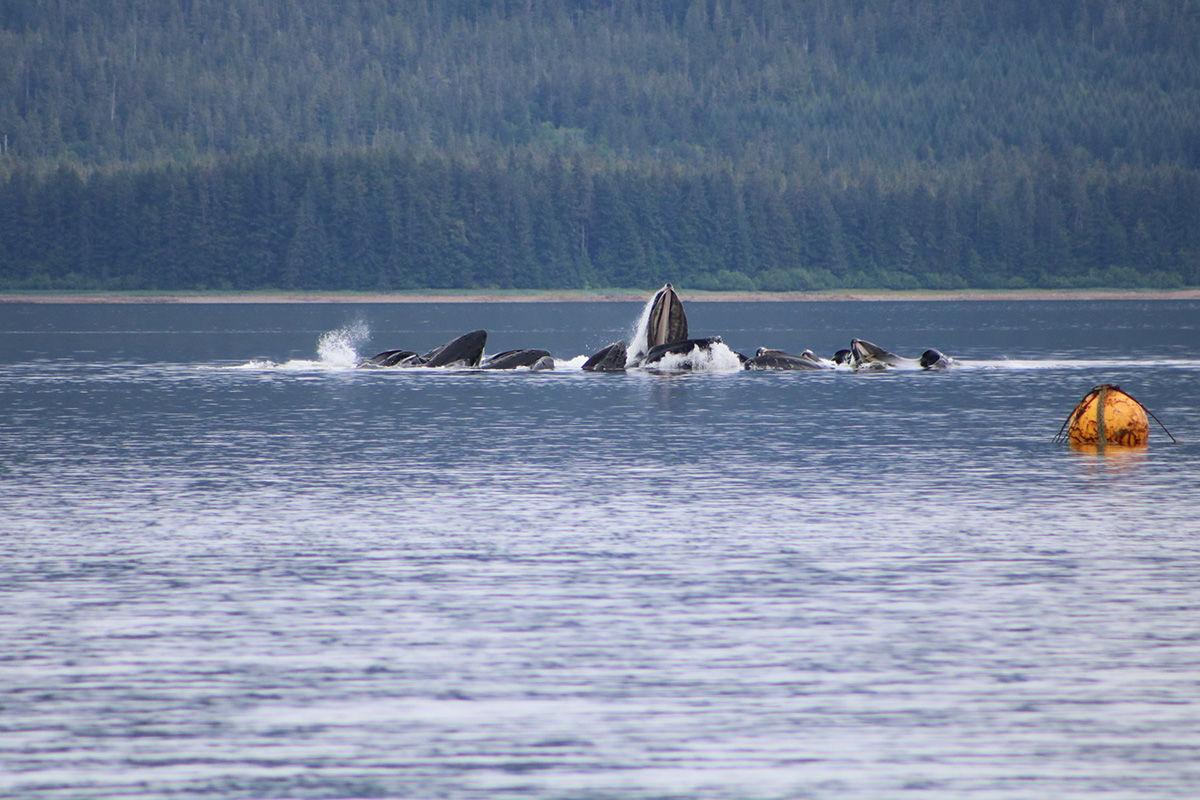 An Alaska fishing excursion often is much more than just fishing. This pod of humpback whales put on quite a show for a group from Yakima last week in Southeast Alaska as the huge whales fed close to where they were fishing. (Photo courtesy Rob Phillips) 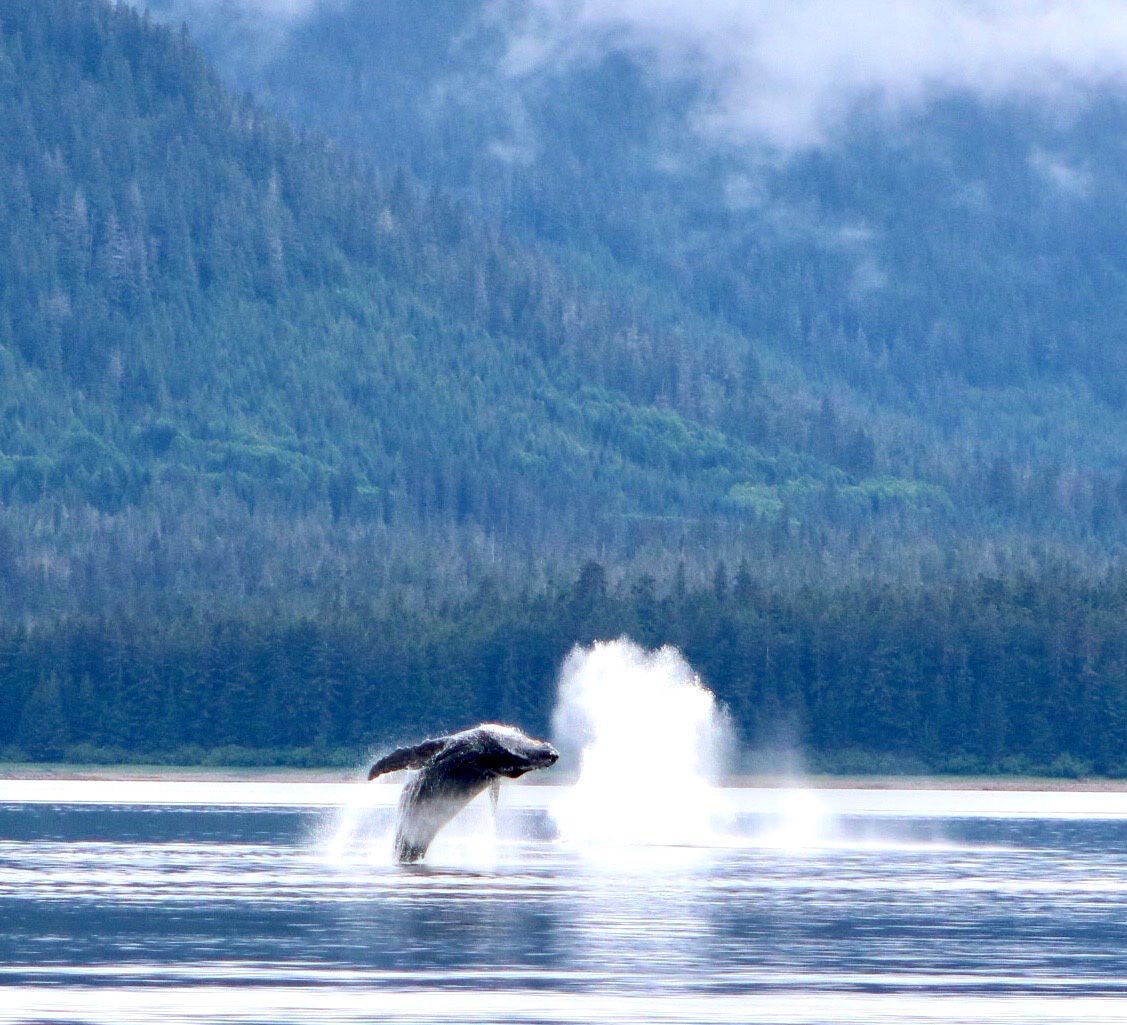 One of the bonuses of fishing in Alaska is seeing all the interesting wildlife including killer whales, eagles, bears, porpoises and humpback whales. Several humpback whales decided to show off close to where the author and his group were fishing last week. (Photo courtesy Rob Phillips)

An Alaska fishing excursion often is much more than just fishing. This pod of humpback whales put on quite a show for a group from Yakima last week in Southeast Alaska as the huge whales fed close to where they were fishing. (Photo courtesy Rob Phillips)

One of the bonuses of fishing in Alaska is seeing all the interesting wildlife including killer whales, eagles, bears, porpoises and humpback whales. Several humpback whales decided to show off close to where the author and his group were fishing last week. (Photo courtesy Rob Phillips)

If you’ve watched any one of the dozen or so different Alaska shows on TV, you know it is a wild and beautiful place. And if you love the outdoors, it is a fantastic place to visit.

My wife Terri and I, along with friends Greg and Erin Wilson, spent last week in Southeast Alaska on Chichagof Island. We were guests of Fishing Bear Charters, which is definitely more than just a fishing guide operation. It is like a fancy bed and breakfast that includes fishing, whale watching and bear watching all in some of the most beautiful scenery in the world.

It was Terri’s first time to our 49th state and it couldn’t have worked out better. Well, except for the three months of consternation and worry about whether we were actually going to get to go because of the coronavirus.

Officials in Alaska, understandably so, are quite concerned about folks arriving in their beautiful state, especially from Yakima, the once hotbed of the dreaded virus. With only slightly more than 2400 cases of COVID-19, they are working hard to keep the numbers down.

After testing for the virus a couple days before we departed, with negative test results in hand, we were welcomed to the land of the midnight sun with open arms. Well, except for some of the restaurants, who were not accepting any diners who had just flown into Juneau, negative results or not.

Still, we found something to eat while we awaited our float plane to whisk us away to the tiny village of Tenakee Springs. Also waiting for a plane, in the tiny lobby area of the float plane hangar was none other than Peyton Manning.

It’s weird when you see someone that you see on TV about twice an hour on the insurance commercials, but the second he walked through the door, it was like we’d spotted an old friend. I’ve never been overly star-struck, so I said “Hey Peyton.”

He looked at me like do I know this guy and said “hi, are you Josh?” Nope, just a dumb old fisherman from Yakima. I didn’t say that, but should have. I asked him if he was going fishing, and he kind of mumbled something and walked away. So much for our encounter with Peyton Manning.

When we got off the float plane in Tenakee Spings, it was like stepping back in time. Or, maybe it was stepping into the future given these weird times. The main street, if you could call it a street, was a narrow dirt road, with houses on each side. People rode bikes, or four-wheel ATV’s along the road going about their daily business.

There have been no cases of COVID in Tenakee and they want to keep it that way. Being outsiders we were banished from the little store, and the post office in town and were required to wear our masks when we were anywhere but the lodge. That was fine with us.

We fished three full days with well-known guide Tuck Harry, a longtime Tenakee resident who also is a historian, biologist and entertainer. The weather was pretty much as expected. Periods of rain, with sun breaks now and again. And the fishing was consistently good.

Each day we caught halibut, chinook salmon, coho salmon and pink salmon, along with the occasional rock fish. Bald eagles sat on tree branches and kept a keen eye on us, because if we caught a rock fish, the eagles knew and were immediately circling the boat in hopes that the fish wouldn’t immediately dive after being released.

The highlight of the trip, unless you are a big Peyton Manning fan, was one day a pod of humpback whales moved into the Tenakee Inlet and started bubble feeding. This is where they will go down below a school of herring and will circle around blowing bubbles to the surface. The bubbles create a curtain that keeps the baitfish in a tight ball, and then the whales come up through the bubble curtain and feed on the small fish. We watched them do it over and over again.

We also saw orcas and a small version of the killer whale called a Dall porpoise. They and the killer whales are the fasted marine mammals in Alaska. It was fun to see the black and white porpoises swimming along the surface of the inlet.

Chichagof Island is home to a good population of brown bears. Unfortunately, we didn’t see any while we were there. Not that we really wanted to see one while we were walking from the lodge to the boat and back each day. But it would have been fun to see a bear or two, from the boat, which according to Tuck, happens fairly frequently.

Our little Alaska excursion was a nice break from politics, coronavirus case reports, riots, shootings and all the other craziness going on these days. The food was excellent, the fishing was good, the company and conversation was great and we’d go back tomorrow if we could. We’re just thankful we were able to go at all.

I keep wondering if Peyton had as good a time as we did.