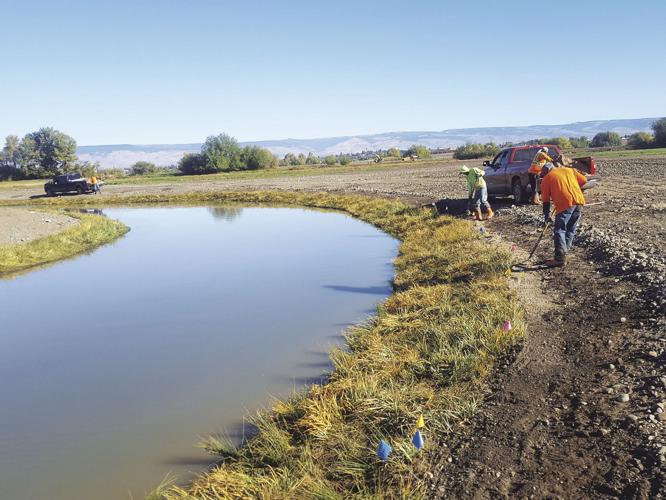 Mariposa Restoration Services staff install sod mats near a horseshoe-shaped pond, one of the floodplain enhancement features at the Schaake Habitat Improvement Project. 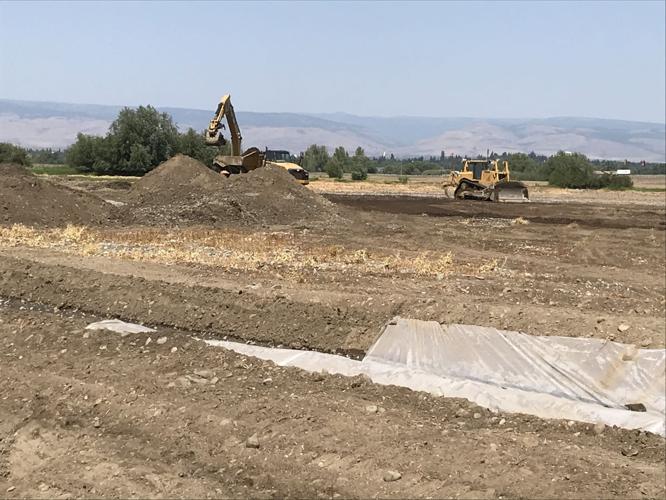 Reclamation staff from the Yakima Field Office excavate dirt on one of the northern floodplains during work to restore 130 acres of Yakima River floodplain near Ellensburg as part of the recently completed Schaake Habitat Improvement Project. 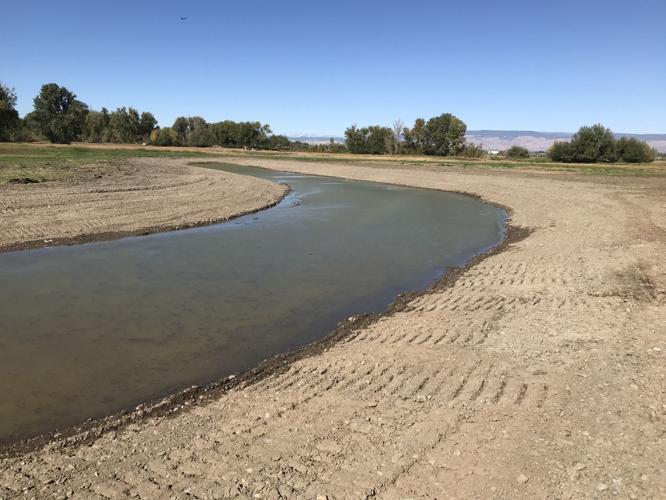 Early work on the recently completed Schaake Habitat Improvement Project near Ellensburg prepared the floodplain for more than 100,000 new plants and 20 acres of seeding.

Mariposa Restoration Services staff install sod mats near a horseshoe-shaped pond, one of the floodplain enhancement features at the Schaake Habitat Improvement Project.

Reclamation staff from the Yakima Field Office excavate dirt on one of the northern floodplains during work to restore 130 acres of Yakima River floodplain near Ellensburg as part of the recently completed Schaake Habitat Improvement Project.

Early work on the recently completed Schaake Habitat Improvement Project near Ellensburg prepared the floodplain for more than 100,000 new plants and 20 acres of seeding.

ELLENSBURG — Thanks to significant rain over the past week, plenty of water flowed rapidly through two new Yakima River side channels just off of Interstate 90 west of Ellensburg on Tuesday.

Nearby, a pair of deer wandered through restored floodplains, surveying thousands of recent plantings poking up through the dirt, many of them protected by mulch to keep in moisture.

Bureau of Reclamation project manager Jeanne Demorest regarded the scene at the Schaake Habitat Improvement Project with satisfaction, noting how everything appeared to be working as designed for a $6 million project completed last month after more than two decades of planning.

“I think everybody’s super excited that it’s done,” Demorest said, “and has been waiting for a long, long time.”

An additional 130 acres of floodplain along a two-mile reach of the river and two side channels should create plenty of valuable spawning habitat for native fish, including salmon, bull trout and steelhead. Water quality will continue to improve thanks to the removal of agriculture and 73,500 cubic yards of sediment agriculture from the 285 acres the Bureau of Reclamation purchased for $3.245 million in 2003.

Yakama Nation’s Department of Natural Resources superintendent Phil Rigdon emphasized the importance of establishing connections to groundwater, helping keep the water cooler and cleaner. He said the Tribe played a key role in planning with more than 40 stakeholders, especially in regard to placing hundreds of logs into the river as they have in many other Yakima Basin streams.

“That’s where we’ve used our science and developed that pretty extensively,” Rigdon said. “I’m always proud of how that is growing.”

A crew of Reclamation staffers that fell from 16 people in 2019 to nine in 2020, due to COVID-19 restrictions and staff cuts, transported wood from the Cle Elum Fish passage project as part of their work at the site. They also took out nearly a mile of levee, leaving only two small portions that rose well above the floodplain.

What’s left will protect I-90 from a sharp turn in the river, and a 3-foot tall berm made out of the levee material closer to the highway is designed to provide the same level of flood protection. Demorest said the other remaining piece of levee is expected to eventually deteriorate but last long enough to protect new plantings.

They’ll be part of some 40 acres of new and enhanced wetlands, offering prime habitat for the area’s waterfowl and wildlife, as well as some migratory birds. Twin City Foods agreed to move three spray fields — using partially treated water from the nearby plant — back from the river and onto the city’s property located on the opposite side of the berm.

Bureau of Reclamation’s Wendy Christensen said the state Ecology Department’s officially certified the groundwater, and project manager Janine Empel said Reclamation will continue to monitor the area through 2023. They’ll get help from local contractor Mariposa Restoration Services, which installed more than 100,000 plants with 20 acres of seeding and plans to install another 20,000 plants with 20 more acres in 2023.

Yakama Klickitat Fisheries Project Coordinator Joe Blodgett said rainfall and snowpack over the next few years will determine how quickly the river adjusts and establishes new habitat for fish. But he expects “huge benefits” from an area that once was a feedlot and was initially identified as a location for floodplain restoration in the late 1990s, according to Christensen.

Rigdon said one of the larger projects completed in the basin to date offers another example of positive restoration work done through the collaboration encouraged by the Yakima Basin Integrated Plan. However, he also pointed to the negative effects of this year’s dry, hot summer as evidence that native fish continue to face significant challenges.

“It’s one of those milestones when you look at the Yakima and the progress we’ve made is enormous and we celebrate that,” Rigdon said. “But we’ve got to be hyperactive and making sure we do more.”