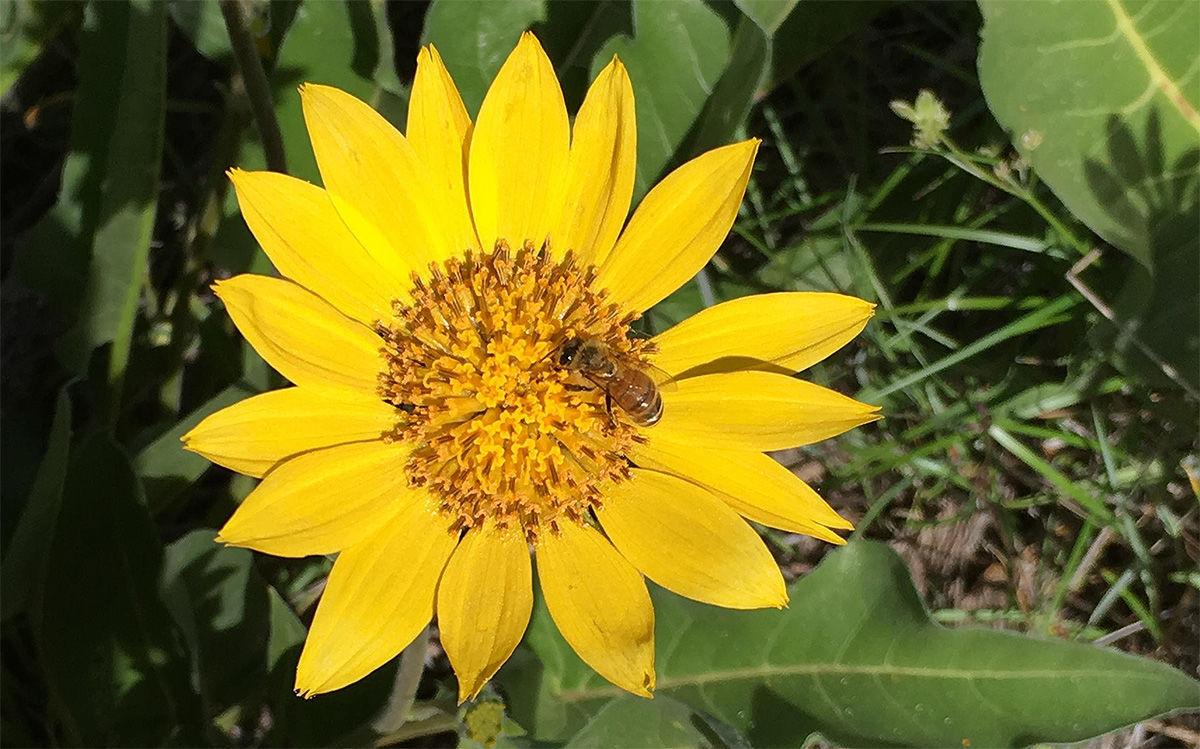 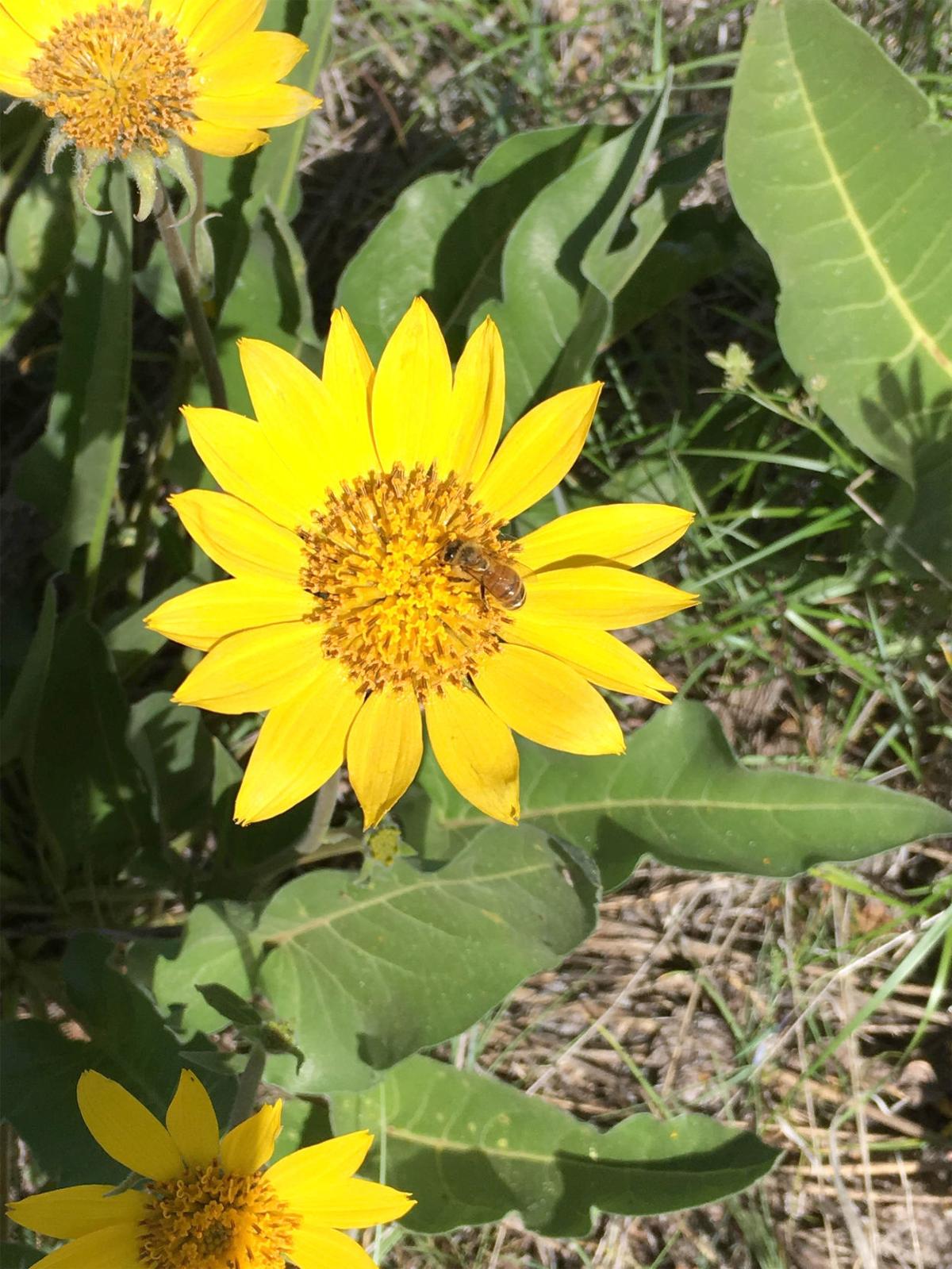 A bee on a balsamroot flower at Snow Mountain Ranch during Saturday’s Peak Wildflowers Walk hosted by the Cowiche Canyon Conservancy.

A bee on a balsamroot flower at Snow Mountain Ranch during Saturday’s Peak Wildflowers Walk hosted by the Cowiche Canyon Conservancy.

Hikers enjoying another beautiful wildflower season in the Yakima Valley and beyond can thank bees for their valuable contributions.

The vibrant colors and refreshing scents wouldn’t exist without the hardworking pollinators, which in turn depend on the plants for their survival. But constant and growing threats to that symbiotic relationship make it more important than ever to be aware of how to best allow both the bees, wildflowers — and by extension the entire ecosystem — to survive.

“If suddenly the bees were to disappear in this area, there’d hardly be any game birds,” said longtime Yakima beekeeper Chester Ferguson, who tends to around 150 hives and more than one billion bees in rural areas, mostly near the bed of the Yakima River. “If nothing pollinates the flower, then there can be no seed production.”

That would in turn mean a food shortage for insects, causing a ripple effect all the way up the food chain. It’s why beekeeper Cliff Peterson and many others are concerned about significant losses in bee populations, as well as other pollinators.

Ferguson and Peterson both remember a time when honeybees and bumblebees could be seen pollinating flowers everywhere in central Washington. Today, they’re much more rare, and Peterson estimates he only sees one or two bumblebees per year in the urban areas where he tends to hives.

A long, cold winter probably caused additional bee mortality, according to Ferguson, but that’s a trivial problem compared to issues stemming from habitat loss, pesticides and Varroa mites, which are believed to cause colony collapse disorder. Ferguson and Peterson also noted state officials and others identify many wildflowers as noxious weeds, leading to the elimination of some vital food sources.

“Things like dandelions that nobody likes in their yard, bees think are great and so my definition of a weed is just that it is a misplaced flower,” said Peterson, the vice president and a past president of the Central Washington Beekeepers Association. “If you’re looking at undeveloped land where you have a wildflower meadow or something like that, they are not misplaced, they’re where nature thought that they ought to be.”

Another past president, Terri Towner, also believes too many chemicals and unnecessary lawn maintenance can be harmful for bees, which pollinate plants within a three-mile radius. She emphasized the best course of action is often to leave bees alone to let them take the nectar and pollen they need to feed their colonies.

“When you’re hiking, don’t take a flower, take a picture,” Towner said. “People need to think and be responsible.”

Those looking to be proactive in helping bees can plant flowers for all seasons, Towner said, especially those that bloom in June, July and August when it’s dry and harder for bees to find pollen. She also suggests leaving water out for bees, which will help them survive and make more honey.

Cowiche Canyon Conservancy executive director Celisa Hopkins recognizes the importance of bees for wildflowers on CCC lands, and the organization’s partnering with the Yakima Symphony Orchestra to celebrate pollinators this month. Along with a concert at The Seasons on May 22, the collaboration will feature several educational events including The Beekeeper and the Biologist with beekeeper Brian Felix and Yakima Valley College biology instructor Claire Carpenter at YVC’s Deccio Building on May 15.

The Central Washington Beekeepers Association offers plenty of resources for aspiring beekeepers, but Towner and Ferguson warn those who do the job poorly can cause detrimental effects for all bees. Towner advises finding a mentor rather than trying to learn on your own, and she’s eager to share her knowledge as the association’s swarm coordinator.

The sight of bees on an invigorating spring wildflower hike might not be welcome to everyone. But those who keep in mind these busy workers supply what’s needed to help the flowers delight our senses shouldn’t have any trouble finding some appreciation.

The Cowiche Canyon Conservancy and the Yakima Symphony Orchestra are partnering to offer the following free events this month:

May 22, 7-9 p.m.: Hear Nature Sing: The Voices of Bees, Bears and Butterflies at Seasons Performance Hall.

April through May: Pollinators: A Hero's Life art exhibit at Essencia Artisan Bakery and the Larson Gallery Pop-Up at Gilbert Cellars.

Learn more about bees and beekeepers