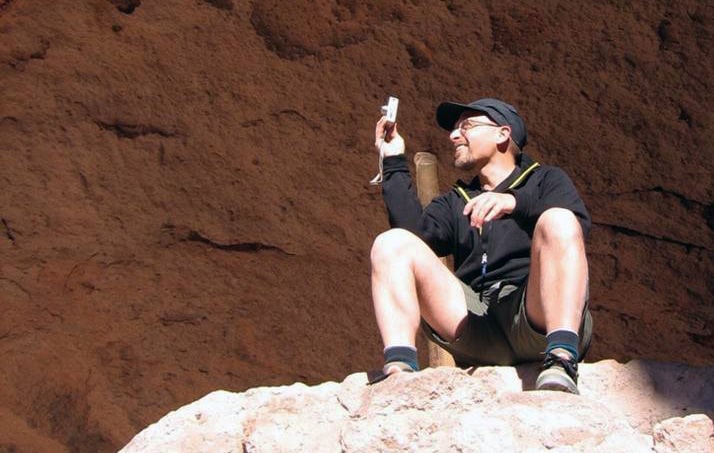 Ethicist William Lynn, who played an integral part in the process leading to the current process of removing barred owls to give spotted owls a chance to survive, takes photos at Bandolier National Monument in New Mexico. (Photo courtesy WILLIAM LYNN) 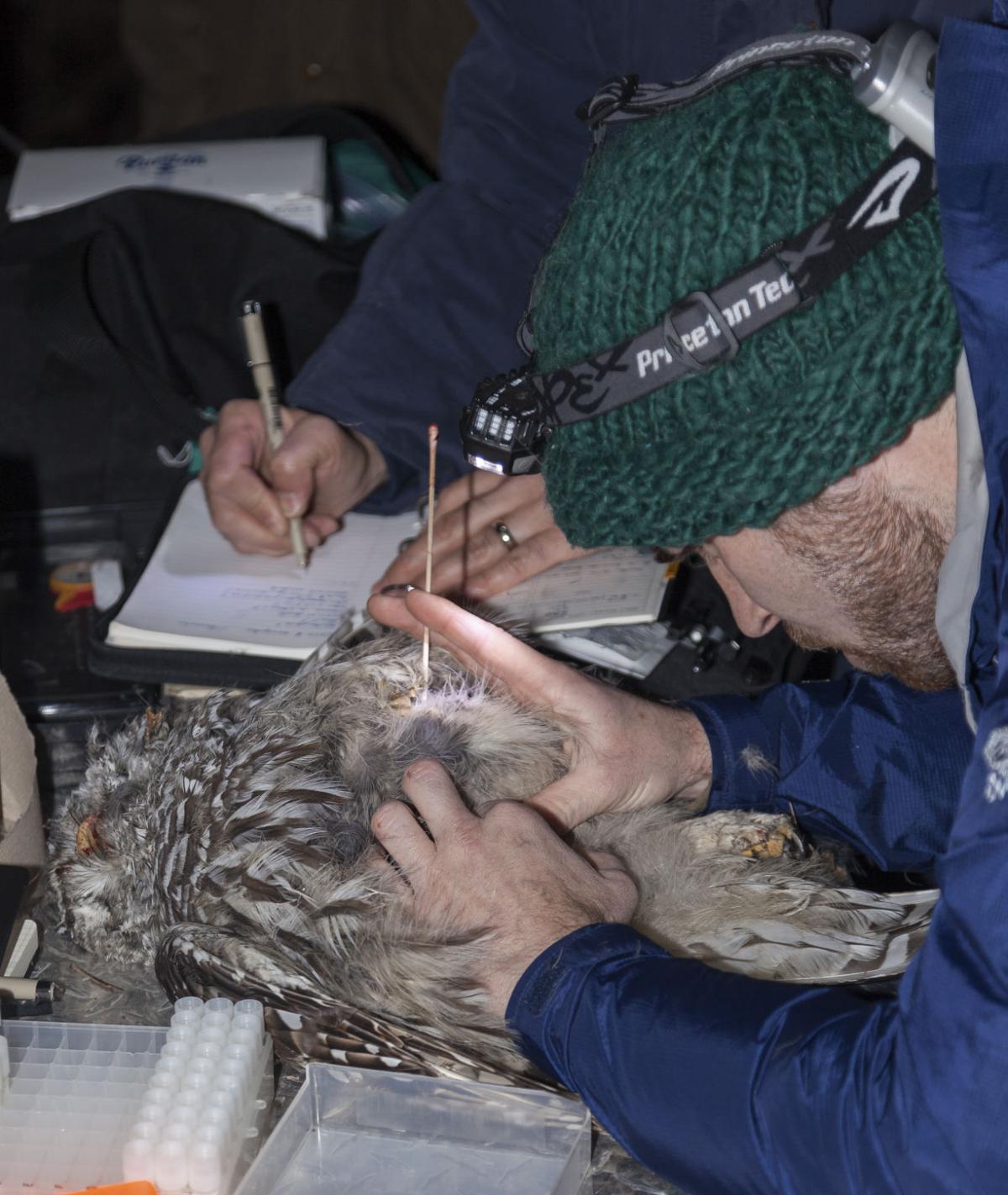 Researchers Zachary Hanna, foreground, and Jack Dumbacher collect tissue for genetic analysis from a barred owl removed on the Hoopa Reservation in California, one of three areas where scientists are killing barred owls to determine whether their removal will give endangered northern spotted owls a stronger chance at survival. (Photo courtesy RAY BOSCH/U.S. Fish and Wildlife Service)

Ethicist William Lynn, who played an integral part in the process leading to the current process of removing barred owls to give spotted owls a chance to survive, takes photos at Bandolier National Monument in New Mexico. (Photo courtesy WILLIAM LYNN)

Researchers Zachary Hanna, foreground, and Jack Dumbacher collect tissue for genetic analysis from a barred owl removed on the Hoopa Reservation in California, one of three areas where scientists are killing barred owls to determine whether their removal will give endangered northern spotted owls a stronger chance at survival. (Photo courtesy RAY BOSCH/U.S. Fish and Wildlife Service)

“Science,” he said in the June 2008 broadcast, “can’t make those moral decisions for us.”

A Massachusetts-based research scientist, Ph.D, university professor and public-policy ethicist, Lynn called for “building in an ethical dimension to our discussions of wildlife management.”

At the time, ethics were not, if ever, part of the equation.

Federal and state wildlife agencies had frequently killed members of one animal species on behalf of another, but none of the National Environmental Policy Act processes leading to those campaigns had included an ethics review.

Then again, none had entailed anything quite as unsettling as what the U.S. Fish and Wildlife Service (USFWS) had in mind.

Because the population of the northern spotted owl from British Columbia to California had been in a freefall since a stunningly swift influx of barred owls — a slightly larger and more aggressive species once confined to the Eastern seaboard — USFWS biologists were considering a dramatic response they weren’t happy about.

Eventually, the plan would call for killing 3,600 barred owls in four carefully chosen areas known to be home to previously healthy populations of spotted owls — one in the wooded slopes around Cle Elum — to see if the spotted owls would rebound.

At the time, though, that plan was purely theoretical. According to USFWS biologist and project lead Robin Bown, it was one of only three viable options.

One was to let the natural process unfold. “And if we do nothing,” Bown said, “we think northern spotted owls would go extinct.”

The second was to capture and breed spotted owls in zoo populations, the most expensive option — and, in terms of retaining a genetically sound population without the benefit of a natural environment, the most difficult.

And, finally, there was the deadly experiment: Kill enough barred owls in selected areas — creating “refugia,” Bown said — to see if it would give the spotted owls a fighting chance against “the tsunami effect” of the barred owls’ rapid and nearly pervasive spread.

“You never know,” she said. “Maybe they will eventually develop the tools necessary to be able to deal with the barred owls themselves.”

What if they don’t? What if the killing had to go on forever?

“The Fish and Wildlife Service has a mandate: When something goes on the list, they do what they have to do to get it off the list. But at some point we have to ask these questions,” said Jack Dumbacher, curator of Birds and Mammals at the California Academy of Sciences.

“People have been killing things for a long time,” said Dumbacher, who had already been experimenting, with a USFWS permit, on small-scale barred owl removal in spotted owl California habitat since 2006. “But people feel differently about it when it’s a big, beautiful owl.”

Certainly William Lynn had qualms about it.

Following his radio broadcast, the federal agency decided for the first time to include in its National Environmental Policy Act process the very kind of ethics review he had advocated.

When Lynn was brought in to help frame the issue in an ethical context, he was anything but an easy sell.

“I didn’t come into the process automatically opposed,” he said. “I’m a professor. I try to keep an open mind. But, in general, I think lethal management of wildlife is a bad idea and doesn’t work.

“I came in fundamentally skeptical about this issue.”

A lot of people were.

It was such a touchy issue, in fact, that those early roundtable discussions between representatives of the various stakeholder groups — federal, state and tribal wildlife agencies, conservation groups, local governments, scientists, biologists and ethicists — were run under “safe harbor” conditions. Nothing was to be recorded — audio or video — so people could express unpopular opinions without fear of being “outed” later.

For some, it wasn’t a difficult call.

“This isn’t something anybody wants to do, but it is a tactic used to help endangered species recover,” said Dave Werntz, science and conservation director of Conservation Northwest.

The loss of much of the West’s old-growth forests through now-obsolete forest practices, Werntz said, has left the spotted owl in “a very severe habitat bottleneck,” while the planting of trees during the colonization of the Great Plains helped enable the barred owls to cross the country — and in large numbers.

“We put the spotted owl into this situation,” Werntz said. “We have to take action.”

Support for the idea of killing barred owls was strong “not just within Conservation Northwest,” said the group’s executive director, Mitch Friedman, “but with groups like us. The Wilderness Society, Oregon Wild, nobody has much sympathy for barred owls. It isn’t a tough call for us, emotionally versus biologically.

“But there’s a gray area between this as a short-term experiment and this as a forever thing. Yes, we do support removing barred owls to give spotted owls a fighting chance — though I’m not ready to say we’ll support that forever.”

But that will almost certainly be the long-term prognosis, said Michael Harris, the legal director of Friends of Animals, one of two environmental groups that sued to stop the USFWS’ barred owl plan. A U.S. District Court of Oregon judge in Eugene ruled against the complaint in July; an appeal has been filed.

“They’ve opened up a Pandora’s box,” Harris said. “A plan like this really does cross new ethical and moral boundaries. Have we crossed a line here?”

“Even if they kill 3,000 barred owls and we see some improvement on the spotted owls in these test areas, what’s the plan? Do we kill barred owls forever? They’re not eradicating barred owls, nor could they. The problem isn’t going to go away.

“And if they think this is a good idea after four years, it’s just going to become a perpetual killing.”

Whether finite experiment or infinite process, the killing of barred owls on behalf of spotted owls is in its third year on the Hoopa Reservation in northern California, where 71 barred owls were killed the first year, 54 the second and 14 this year through Sunday.

Removals began just four months ago — after the summer nesting season — in two other test areas, around Cle Elum and in Oregon’s Coast Range, where 81 and 91 barred owls, respectively, have been killed.

The removal process hasn’t yet begun in the fourth area, located in southwest Oregon.

Ethicist William Lynn ultimately came around to supporting the USFWS decision. He calls it “a sad good.”

“Barred owl removal is sad, even tragic, for those owls killed,” Lynn said. “But it is a good for the spotted owls and forest biodiversity. Both the sad and good exist simultaneously. Ethics can helps us make the best choice in difficult cases like this.”

And if the barred owl killing process becomes permanent? What then?

“Most of the audience is very supportive of a short-term study to help us figure out what’s going on,” said Dumbacher, who is helping conduct the barred owl removal in the Hoopa test area. “But then you ask the question: OK, now the study’s done and we’ve learned that ... we’re going  to have to do this forever, and people are ‘Whooah,  not comfortable with  that.’

“These are the debates the public is going to have to have. What’s the long-term goal? What do we expect out of our planet, and how are we going to manage it so we get the things out of it we want and expect? It’s all a brave new world, and we don’t have the answers to all these questions.

“We’re only just now beginning to face the questions.”

Added Michael Harris, “And in the meantime, we’re killing a whole lot of birds that are minding their own business.”

YAKIMA, Wash. -- Scientists tell us 99.9 percent of all of the species that have ever existed on Earth no longer exist. Many disappeared becau…