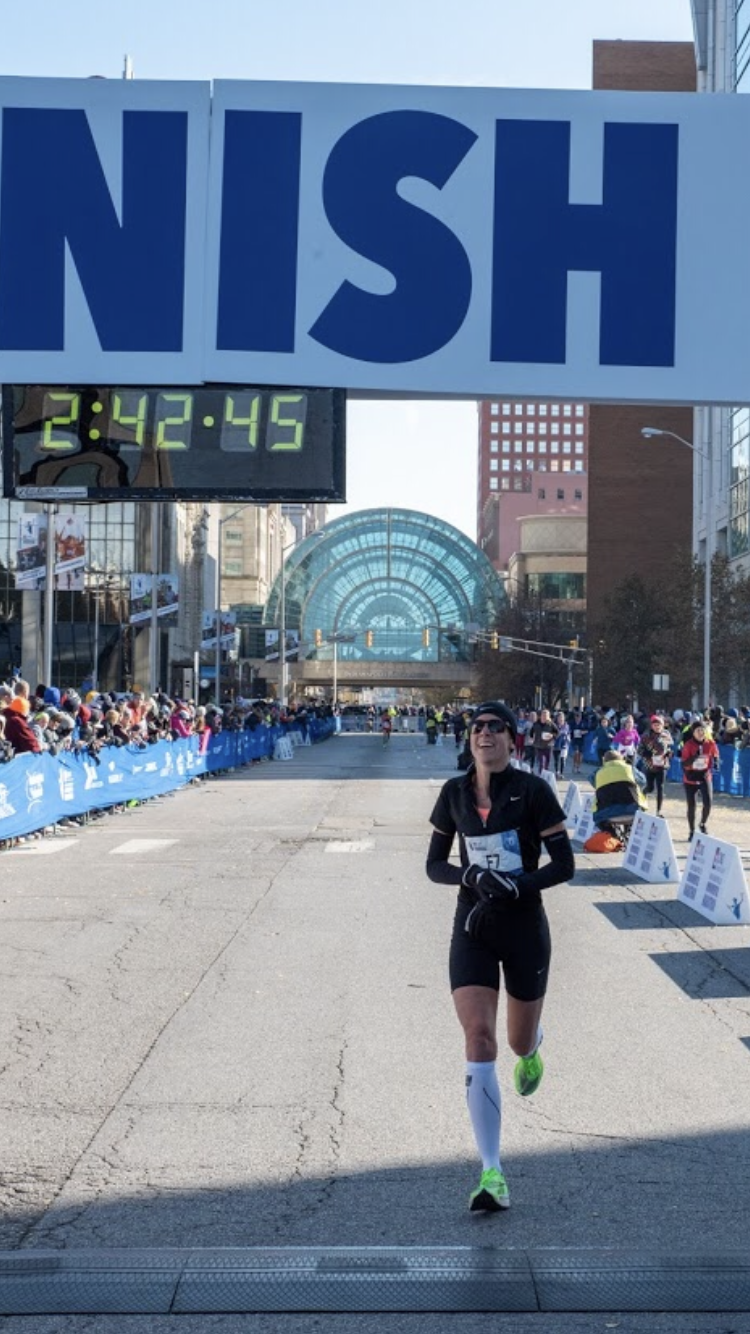 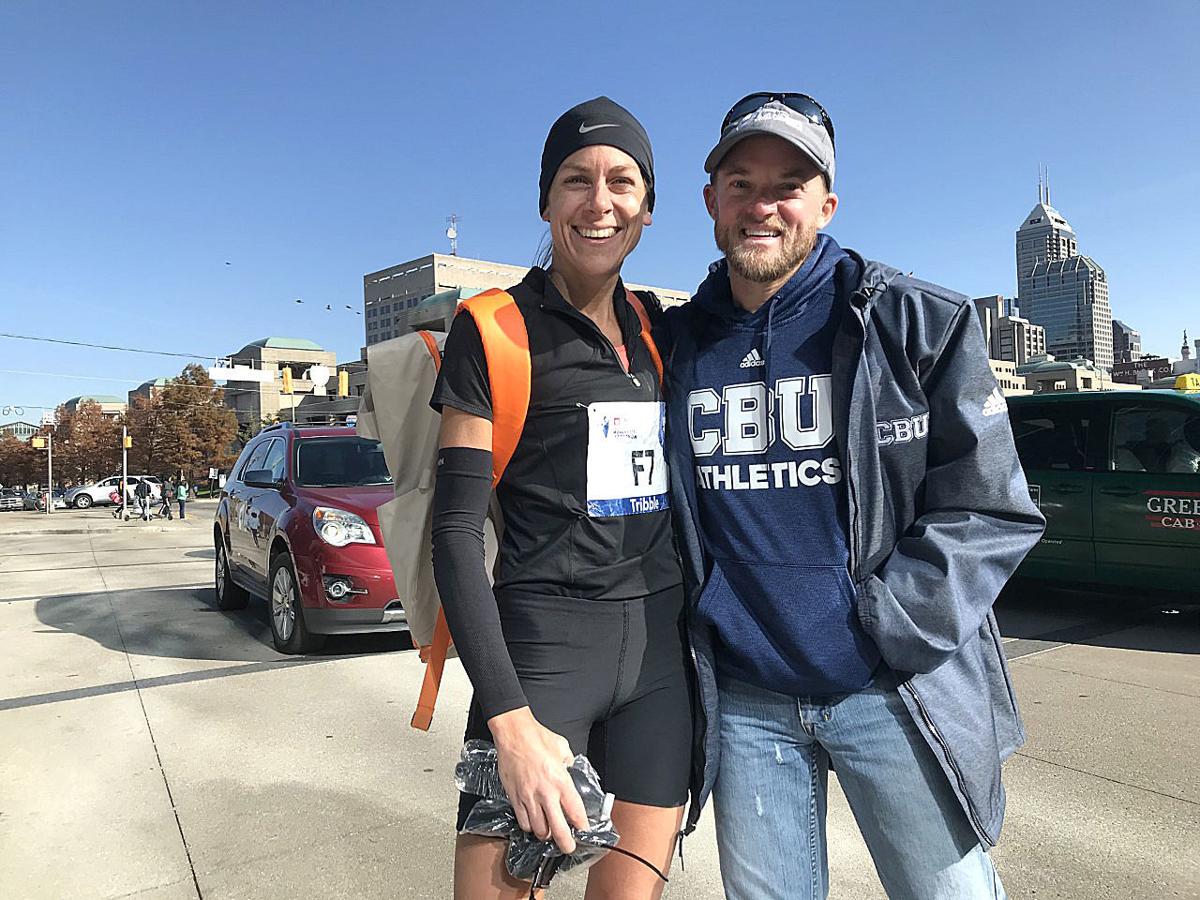 Meredith Tribble and husband Adam at the Indianapolis Marathon. Adam, who ran in the 2008 U.S. Olympic Trials marathon, is the cross country and track coach at Cal Baptist University. (Contributed photo)

Meredith Tribble and husband Adam at the Indianapolis Marathon. Adam, who ran in the 2008 U.S. Olympic Trials marathon, is the cross country and track coach at Cal Baptist University. (Contributed photo)

Meredith Tribble sets no limits on her demanding lifestyle. Married and mother of two young children, a full-time job, involved in her church, and all with the years steadily creeping up.

There’s room in there for more, she felt, as long as the day starts a little earlier.

So before 5 o’clock most mornings, the former Davis standout heads out her front door to run in the dark. The sun will rise at some point, maybe halfway through a hard 14-mile tempo run, but she’ll be back home in time to get the rest of the family up and going.

It’s out there on the trails and roads in the small hours of the day that Tribble found her purest form of joy in running. It’s worth it, she believes, to add this challenge on top of so many others because of the rewards to be found.

In just her third marathon last month, Tribble qualified for the U.S. Olympic Trials next year, winning her age group while placing ninth overall at the Indianapolis Marathon with a time of 2 hours, 42 minutes, 41 seconds.

“It was a goal and I’m just so proud of accomplishing it,” she said from her home in Riverside, Calif. “It wasn’t so much the time that motivated me but the drive to push myself to new limits. Just to power through physically, emotionally and mentally. It was very much a spirit-led journey.”

As Meredith Crane, Tribble was a two-time state runner-up in cross country and a four-time state medalist in track while at Davis, where she graduated in 2002. She attended and competed for Texas A&M and Seattle Pacific, qualifying for nationals in cross country at both, and received a degree in exercise physiology from Central Washington.

Before her second-place finish in the GNAC cross country championships in 2005, Meredith revealed what would one day make her an ideal marathoner when she told The Seattle Times, “I’m not fast. I just don’t tire out. I can sustain a very strong, hard pace for a very long time, and I’m pretty tough in terms of pushing through the pain.”

After coaching locally at East Valley and Davis, Meredith jumped to the collegiate level as an assistant at Oregon State, Mississippi and then Alabama. In 2012, she married Adam Tribble, who was also an assistant at Alabama, and the couple spent seven years in Tuscaloosa. Last year, Adam accepted the head job at Cal Baptist, a Div. II program moving up to Div. I.

There’s no shortage of marathon knowledge and experience in this family, which includes kids Ben, 6, and Georgia, 5. Adam, who ran 2:21 in the 2008 U.S. Olympic Trials marathon, supported and encouraged Meredith’s long-distance renaissance and acts as her coach.

In her debut effort, just to test the legs at the 26.2-mile distance, Meredith ran 2:58 in early spring of 2018. That was easy enough, so she ramped up training and three months later she clocked 2:45:19, just missing the Trials standard by 19 seconds.

Meredith did, however, qualify for the USATF Marathon Championships in Sacramento in early December. Her fitness was solid, as evidenced by a 1:15 half marathon in October, but on the day of the race she backed out feeling ill. She soon discovered she was pregnant, but less than a month later she miscarried.

“Emotionally it was a very difficult time,” she said. “I had to give my body a long time to recover.”

Meredith didn’t resume training in earnest until August of this past summer and her original intent was to take another crack at the Trials standard next week in Sacramento, a popular course for its flat and fast course. But she was ready much sooner.

“I get fit fast for some reason and after a month of serious training we started looking for a (USATF certified) race a little earlier,” Meredith said. “Indianapolis looked good and I was really excited.”

But when she arrived in Indiana everything seemed to conspire against her. Not only did Meredith feel sick and have an aching back the day before, but when the race started it was cold with a below-freezing wind chill. Nothing was ideal.

Until she started running.

“Just when it felt like everything was going wrong, I felt like a million bucks in the race,” said Meredith, who clipped along at an even pace with a 1:21 split at the halfway point. “It felt like something divine happened, I really believe that. After all the challenges and the hard work, this was the reward and it felt wonderful.”

The next step comes on Feb. 29 when Meredith will join the fastest women’s marathoners in the country in Atlanta for the U.S. Olympic Trials. At the front, this race will determine the three qualifiers for the 2020 Summer Olympics in Tokyo. For the rest, as with the men on the same day, it’s an opportunity to compete in what is essentially a national championship.

And if there was a division for 36-year-old mothers of two with full-time jobs, Meredith would be formidable.

“My husband’s whole family lives in Georgia, and we’re planning to take the kids and make it a special day,” she said. “All those times I had my doubts and just wanted to stay in bed those early mornings, I’m so proud I stuck with it. It’s gift for my family and we’re going to enjoy and cherish it.”