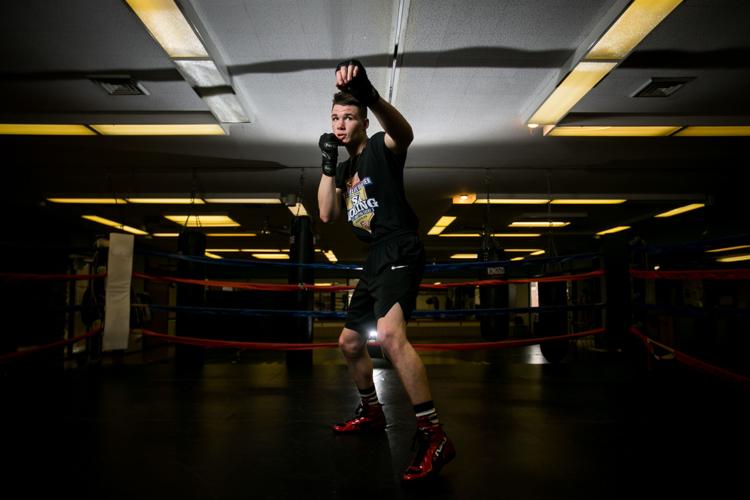 Andrew Murphy, 19, poses for a portrait on Friday, April 5, 2019 at the YPAL gym in Yakima, Wash. Murphy is trying to qualify for the U.S. Olympic trials. 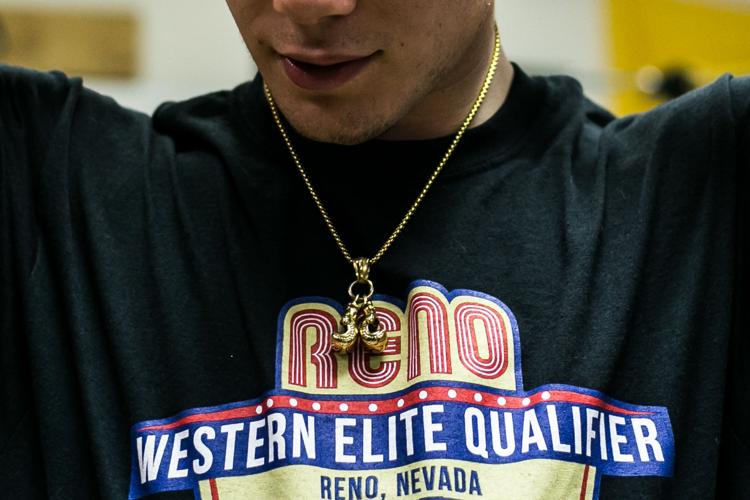 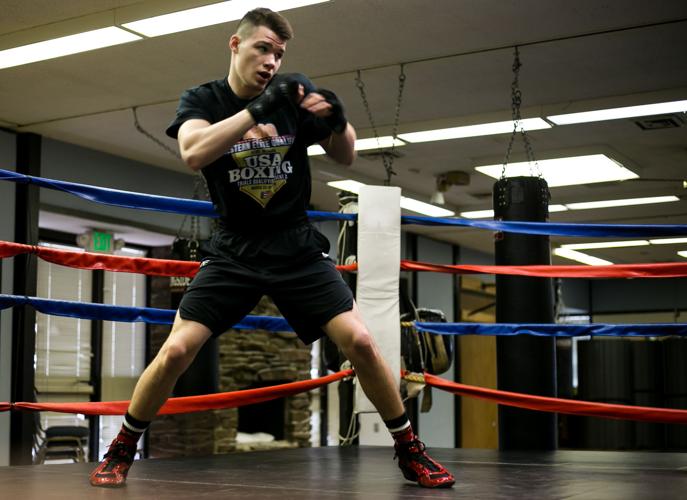 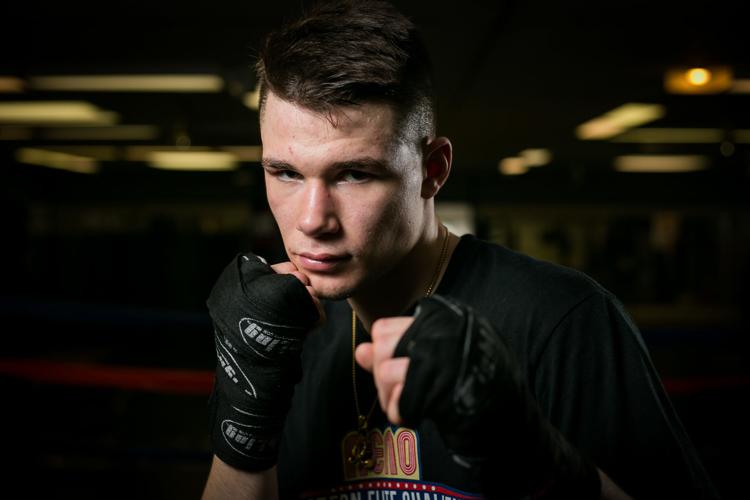 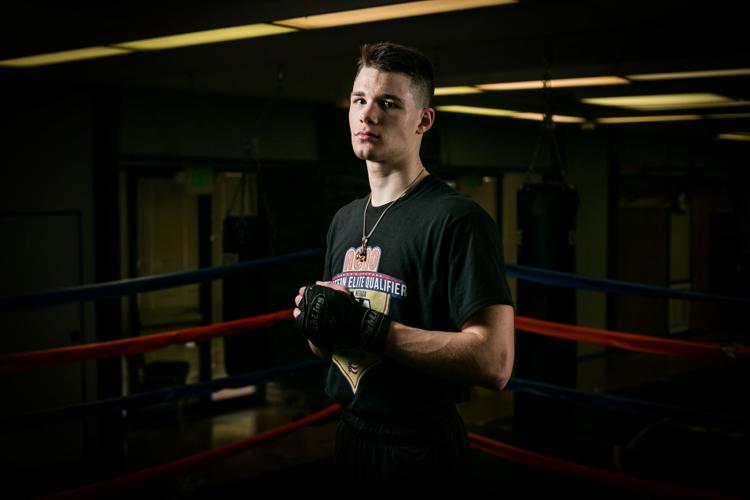 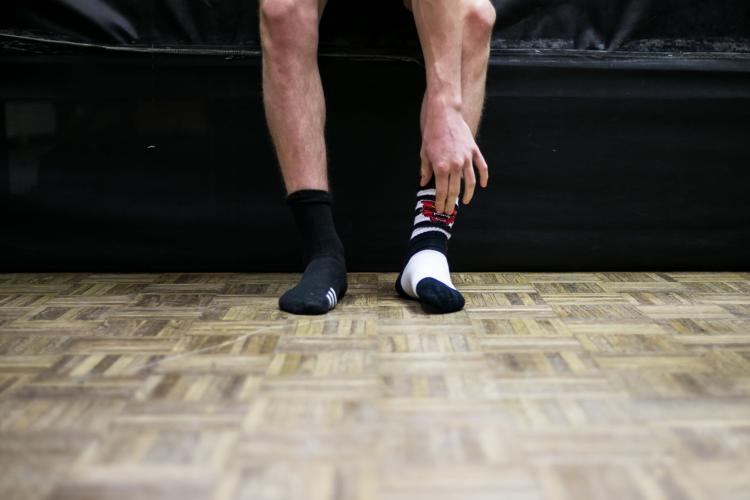 Andrew Murphy, 19, places his stripped socks on before a workout on Friday, April 5, 2019 at YPAL, 602 North Fourth Street in Yakima, Wash. 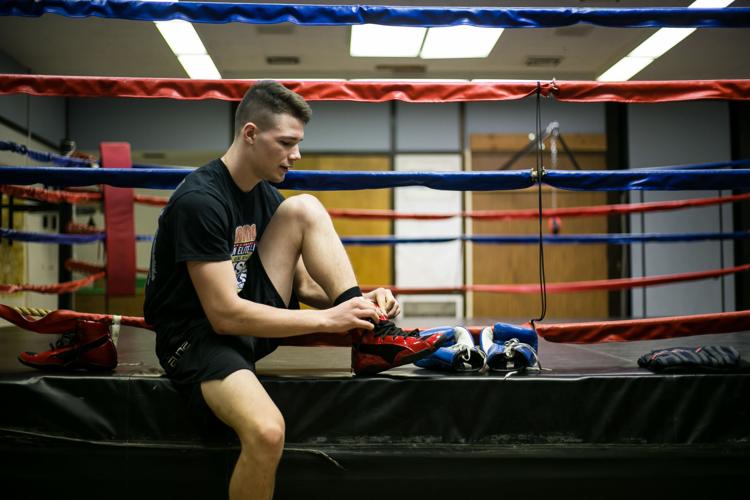 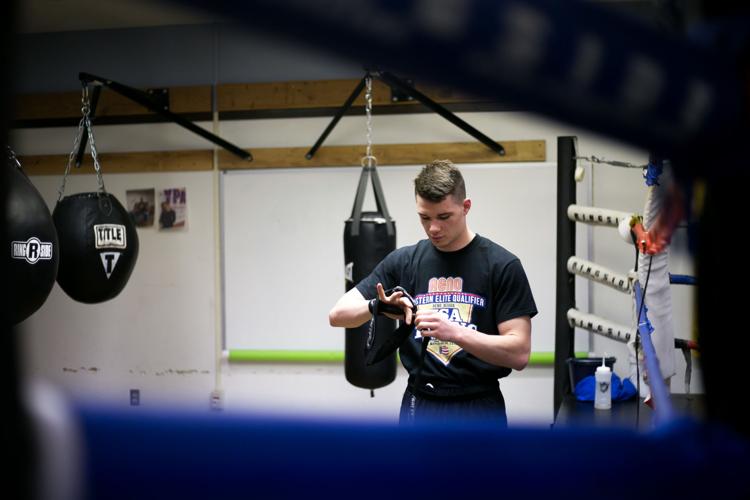 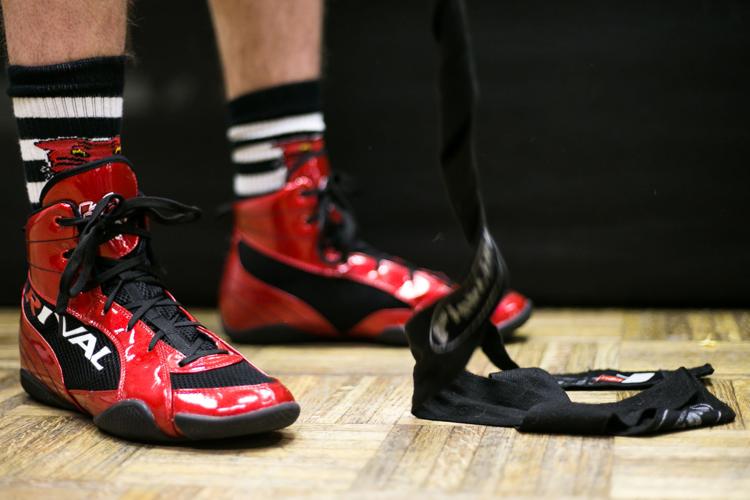 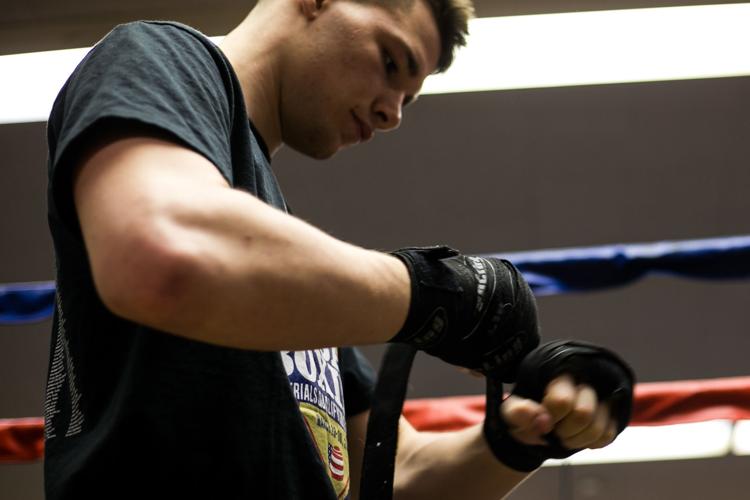 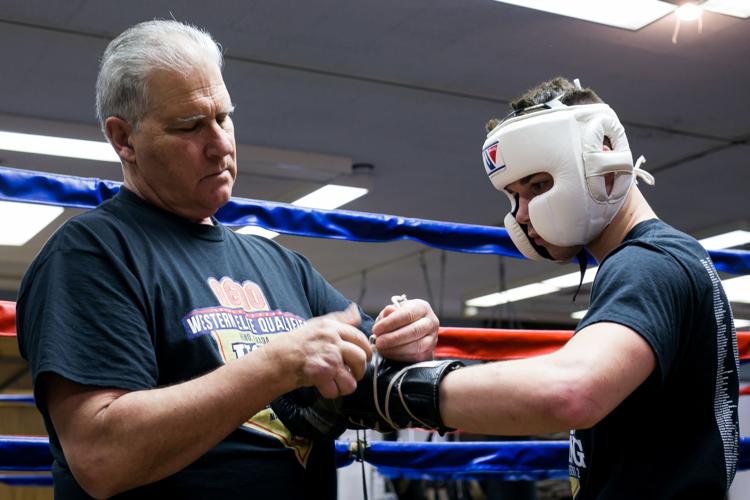 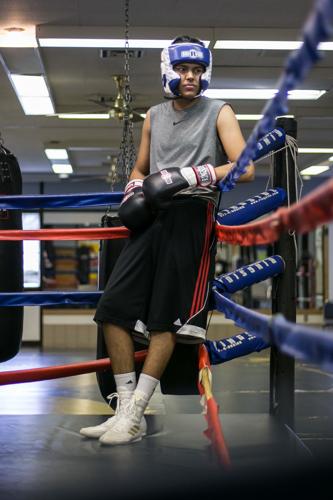 Andrew Murphy, 19, poses for a portrait on Friday, April 5, 2019 at the YPAL gym in Yakima, Wash. Murphy is trying to qualify for the U.S. Olympic trials.

Andrew Murphy, 19, places his stripped socks on before a workout on Friday, April 5, 2019 at YPAL, 602 North Fourth Street in Yakima, Wash.

YAKIMA, Wash. -- The Yakima Police Activities League strives to encourage kids to aim high, even when faced with more than their share of adversity in life.

Anyone in the program skeptical of that message needs only to look to Andrew Murphy, an East Valley grad representing YPAL at the highest levels of amateur boxing. From the first time he stepped into a boxing gym and asked trainer Santos Pakau how he earned the championship belt on his wall, Murphy’s always set his goals high.

“He goes, ‘well, I won it’ and I go ‘well, I’m gonna win one, too,’ and that was something that we always joked about,” Murphy said. “I knew from when I walked in there that I wasn’t there to be a contender.”

Last summer, he capped off his junior career by winning a belt at the Jr. Golden Gloves National Championships in Mesquite, Nev. Murphy has kept improving against mostly older and more experienced boxers in the Elite division, building his career record to 20-5 with ten knockouts by winning a tournament in Reno last month and coming up just short in the first of three chances to qualify for the 2020 Olympics.

Murphy credits his father, Jake Murphy, for instilling a relentless work ethic and ensuring he stays on course, whether that means getting up early for a three-mile run or eating healthy.

An interest in boxing took hold at a young age, when Andrew and his friends would don boxing gloves or oven mitts to spar in the backyard. Andrew decided to pursue boxing as more than just casual exercise, and Jake initially helped his son practice before seeking out the area’s best gym.

“If he didn’t have a ride, he was running to practice,” Jake Murphy recalls. “I just supported him and provided him guidance.”

When Pacau closed his gym, he encouraged Andrew to stick with boxing and seek out another coach. So about 21/2 years ago he found Reid Goyette, who trained boxers at YPAL from 2009-11 before moving on to pros at his own gym and eventually coming back to YPAL in 2016.

He saw the potential in Murphy immediately, though it took some time to adjust a few aspects of his stance and fighting style. But once Goyette fully gained Murphy’s trust, the two became a finely tuned machine unafraid of any obstacle.

“The toughness is just incredible,” Goyette said. “He’ll give it his all ‘til he throws up. He’s got it all, I’m telling you.”

YPAL case manager Michele Forrester said Murphy frequently works alone in the gym after the other boxers go home, and Goyette will sometimes he’ll kick his star pupil out to stop him from training too hard. When Murphy’s not boxing or studying for classes at Yakima Valley College — he hopes to obtain an associate’s degree next spring — he’s watching boxers from all eras to learn new techniques to incorporate into his repertoire.

A quiet confidence kept growing until he reached the junior championships, finally proving on a national stage just how good he could be. After tearing the sagittal band in his dominant right hand in a semifinal win, he still went out the next day and stopped his final opponent in the second round to capture the title.

That injury brought some frustration, but it also gave Murphy the opportunity to improve his jab, and he took full advantage while training with one glove over the next two months. He came back stronger, then a close loss in Tacoma to Oregon’s Omar Murillo at the Washington Golden Gloves event added more fuel to the fire.

When the two met again at a Golden Gloves championship in Las Vegas, Murphy easily won a match that went all three rounds to earn a bid to the national tournament this summer. Then Murphy ended another fight against Murillo before the second round ended for the first of three consecutive wins in Reno to set up a semifinal with an Olympic trials spot on the line against New York’s Alexis Chaparro, who narrowly emerged victorious in his 95th amateur fight.

“One judge gave (Murphy) the third round,” Goyette said. “The guy ran all around the ring. They knew all about his body shots before, so they were afraid of him.”

Pride of the community

Despite Murphy’s renowned boxing prowess, it’s often not the first topic discussed by those who know him at YPAL.

Forrester gushes over the 19-year-old’s unfailing kindness and positivity since she first met him in 2017. Those attributes convinced her to recommend Murphy for a leadership position in the summer program, which he gladly accepted after graduation.

When Murphy’s not training or sparring with up-and-coming boxers like Davis freshman Aldo Garcia, other kids will come to Murphy to talk about issues inside and outside the boxing ring. Although he points out some of them have faced more adversity than he has, he can relate to their struggles since boxing helped him focus at school, and Forrester said Murphy’s an ideal role model.

“He was at one point very angry, was what he reported to us,” Forrester said. “He didn’t know which way he was going, but once he found Reid and YPAL he buckled down and set some goals and self-discipline became his top priority.”

She watches every fight she can, just like Jake Murphy and Andrew’s mom, who lives in Pensacola, Fla. Many of Murphy’s fans helped out when he raised $1,800 through a GoFundme for the Junior National Golden Gloves.

Forrester acknowledges it’s a little strange to see the nice young man she knows so well impose his will on opponents. Murphy doesn’t want to get angry and lose control, so he tries to find the right balance for what he calls a “controlled violence” against his counterpart.

“He’s trying to take away everything that I’ve worked so hard for, all the sacrifices I’ve made ... everything I’ve had to give up,” Murphy said. “He’s standing in my way so I’m going to have to take him out.”

YPAL president Ed Shoenbach said Murphy’s already the best boxer in YPAL history, and Goyette said no pro he’s had was better after eight amateur fights than Murphy was. He’ll keep gaining experience — possibly with a fight next Saturday at Yakima’s Eagle Lanes — and many more milestones lie ahead.

Looking to the future

Forrester loves the way Murphy encourages other YPAL kids to set goals, something they take seriously because of how he follows his own advice.

The 165-pound division boxer said he’ll know when it’s time to turn pro, but for now he’s set his sights on the 2020 Olympic trials. Two more chances remain, starting with the 2019 Eastern Elite Qualifier and Regional Open championships in Columbus, Ohio, from Oct. 5-12.

Finally, Murphy hopes to travel to Oxnard, Calif. in early November for the Last Chance Qualifier, a USA Boxing event held in conjunction with the National Association of Police Athletic/Activities Leagues, Inc. Championships. No matter what happens, YPAL president Ed Schoenbach said everyone will be in Murphy’s corner, since he’s the best representative the group could hope to have.

That support’s not lost on Murphy, who’s grateful for everything his family and the YPAL community have done for him. He’s eager to return the favor by being the best mentor and boxer he can be.

“I feel like I get a lot of love and that’s what I do it for,” said Murphy, who lives in Selah with his father. “I know if they’ve got my back, then I’m going to be alright. I’ve got to do it for them.”

Art at Millennium Plaza in Yakima is getting an upgrade, including the bubbler wall and a tiny tractor