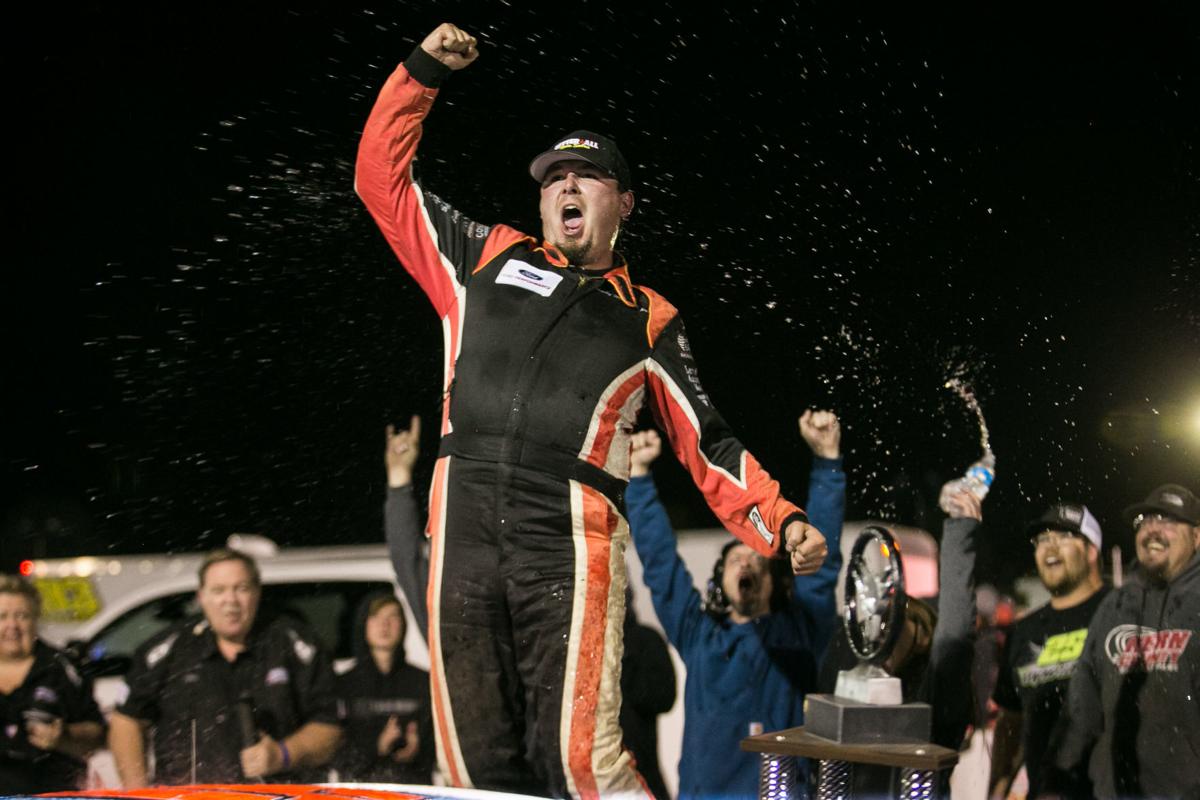 Randy Marshall Jr. of Moxee throws his fist up in victory after winning the Northwest Super Late Model 200-lap race at the 32nd annual Fall Classic Sunday, Oct. 6, 2019, at the Yakima Speedway in Yakima, Wash. 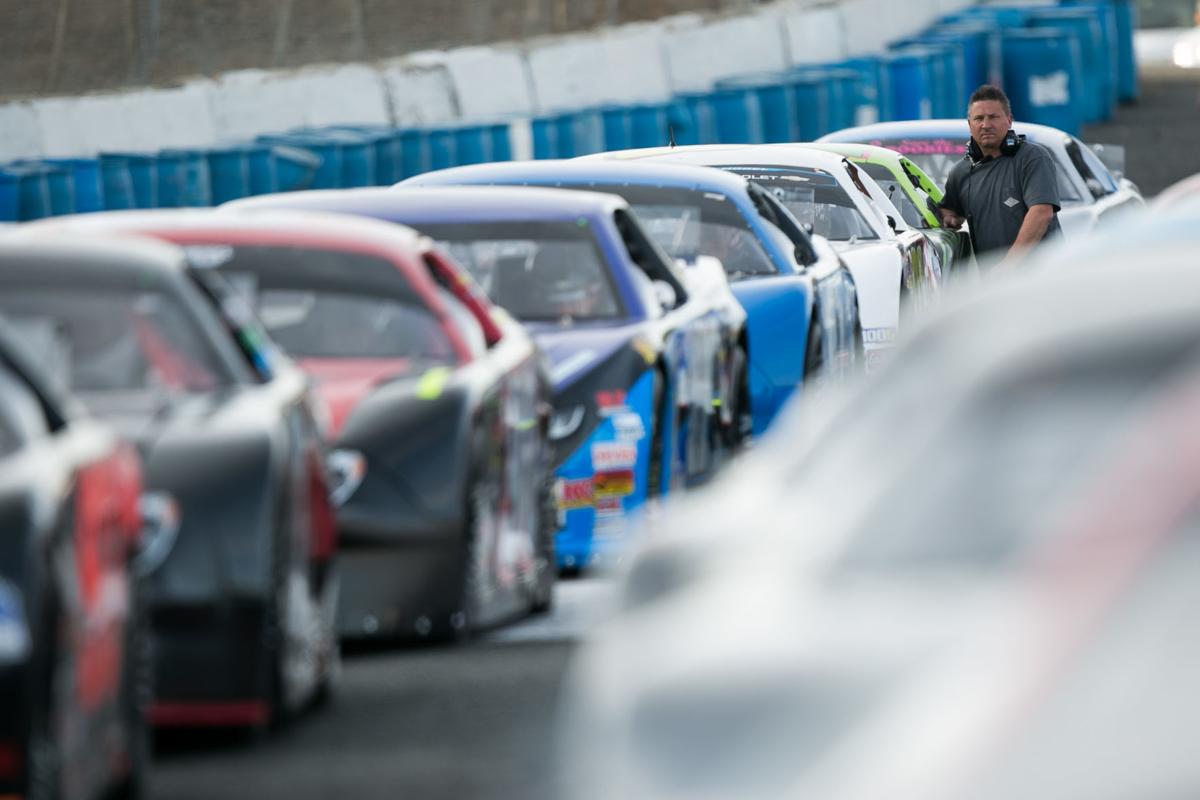 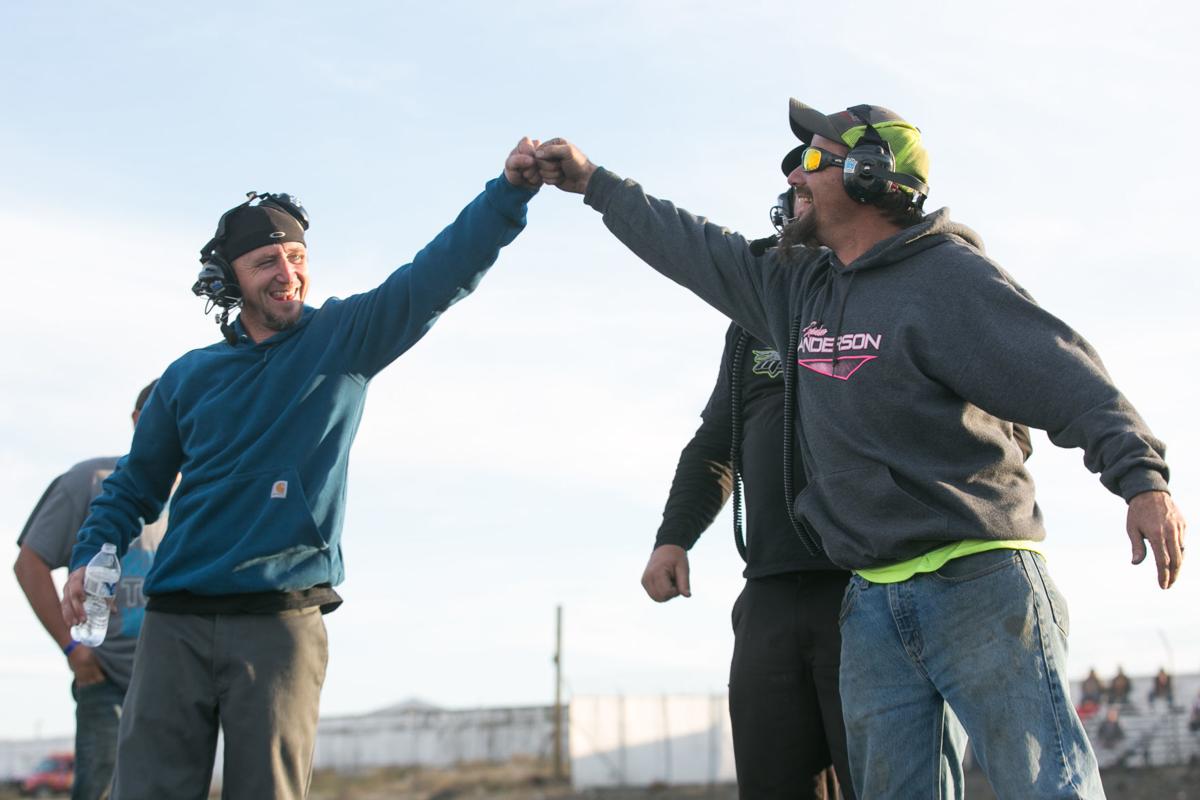 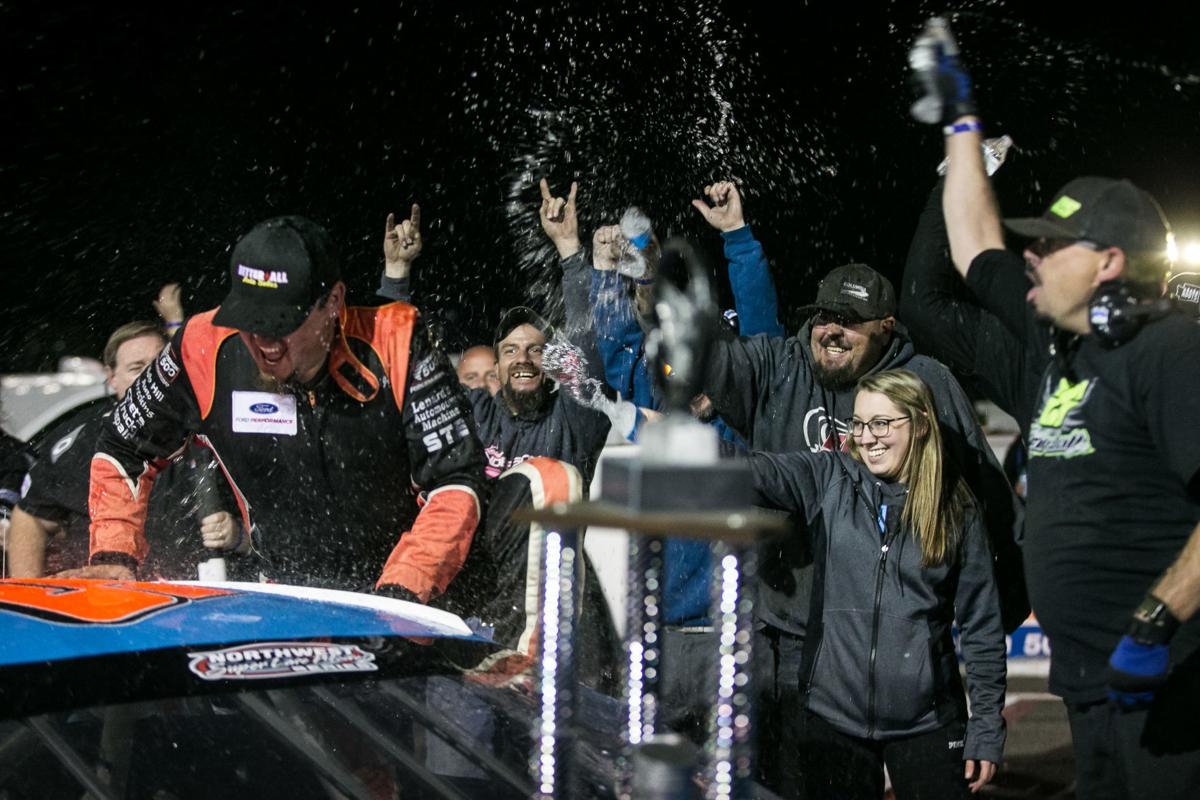 Randy Marshall Jr. of Moxee throws his fist up in victory after winning the Northwest Super Late Model 200-lap race at the 32nd annual Fall Classic Sunday, Oct. 6, 2019, at the Yakima Speedway in Yakima, Wash.

With the victory of his life within reach and one of his racing heroes trying desperately to steal it from him, Randy Marshall Jr. leaned on what he could trust.

His team, his skill and his car.

Yes, the spotless new car that the Moxee family purchased just two weeks ago and had never raced. But with a machine this good, trust comes a little easier.

The 29-year-old Marshall led Sunday’s 32nd annual Fall Classic for nearly all of the 200 laps with front-running dominance. But he still needed to hold off the crafty and threatening charge of Naches veteran Jason Jefferson to earn his $8,000 winner’s prize at Yakima Speedway.

As the trophy celebration and post-race revelry carried on, Marshall was in awe of it all.

“Jason’s name is probably one of the greats to come out of Yakima,” he said. “To have him on my rear bumper, I had to be on my A game. I over-drove the car a little bIt here and there, so I had to calm myself down. It wasn’t easy, but we got the job done. I have the best guys, and they made me look good.”

The Marshall team purchased the new Super Late Model machine from Wenatchee’s Garrett Evans, the Speedway’s Apple Cup winner last May, just two weeks ago and knew it was tight and ready to go. So much so they skipped most of the Fall Classic’s practice sessions.

“We knew the car was really good and it was going to race well,” Marshall said. “But this was a 200-lap race with a ton of experienced guys. What gave me confidence was that the longer we ran the better it got. The power and the set-up never went away.”

Jefferson, 44, won the Fall Classic three years ago and earned his first top-five finish when Marshall was 10 years old and racing quarter midgets. Starting 18th in a field of 25, he ran a patient, well-executed race that nearly earned him the victory.

“I started so far back, and that hurt me a little bit,” he said. “We wanted to get up in the top 10 by the (100-lap) break and we were fourth, so that was really good. But when I finally got to Randy, I just didn’t have enough laps left. I tried to work him over a little, but he had the best car today. Congrats to him.”

Coming off the final yellow-flag restart on lap 183, Jefferson’s best chances came on laps 191 and 193 when he drew nearly flush with Marshall’s bumper on the turns. Even when it appeared Marshall was losing some handling, he never lost power coming off those turns.

“I could roll up to him, but his drive off was really good,” Jefferson said. “I thought when I started putting heat on him he’d maybe make a mistake. I had to regroup myself a couple times because when you get close you can over-drive the car and then you lose it. I started talking to myself there. The older you get the more you take things as they come, so this is all good.”

In addition to Jefferson, Marshall also had to contend with a late charge from another local veteran who knows all the tricks at the half-mile oval. Moxee’s Mike Longton, the 2008 Fall Classic winner, overcame a fluid leak that forced two pit breaks in the first half to reach as high as third before settling for fourth behind Trent Moriarity of Monroe.

As the attrition of a season-ending 200-lap race thinned the field down to 10 cars over the final 15 laps, Marshall endured the final minutes of nearly three hours of racing by thinking of his team.

“We were so excited about this car,” he said. “We just needed the right equipment and the chance to put everything together. We had all that going for us, so I just had to get the job done behind the wheel. It’s a thrill and a relief.”

Sunday’s finale was a true race within a race.

While Marshall was holding off Jefferson for the Fall Classic prize, Trevor Cristiani of Boise, Idaho, captured the Northwest Super Late Model Series championship despite being able to run only 72 laps. For that to happen, he needed two things that — at times late in the race — seemed like complete longshots.

Cristiani first need Evans to finish out of the top 10. After he was forced out when a rock punctured his radiator on lap 133, Evans ended up 11th.

Then Cristiani needed Alan Cress of Stayton, Ore., to finish out of the top five. He was sixth.

Before the main event rolled out on the starting grid, the Fall Classic was already a rousing success with a total of 164 cars racing in five classes over the weekend. And the ideal weather brought out a crowd that track officials estimated was the event’s biggest in 20 years.

Nobody enjoyed the whole scene more than the Huffines family as Garrett Huffines, a senior at Selah High School, captured the 100-lap Pro Late Model race and uncle Jason followed with a victory in the 60-lap Hobby Stocks event.

Garrett Huffines not only stayed clear of a congested mass of pursuers but had enough fuel to hold on at the end of the two-hour stop-and-go.

With a protracted race filled with numerous cautions and stoppages, six drivers who climbed into the top five during the final 20 laps either ran out of gas or dropped out with mechanical issues.

Huffines, however, had the juice to close out the victory even though he admitted the thought of running dry had him “scared as hell.”

Jason Huffines led every lap in Hobby Stocks and held off Rich Peters to complete a bookend double with his Apple Cup win.

EDITOR'S NOTE: This story has been corrected to identify Garrett Huffines as Jason Huffines' nephew, not younger brother.