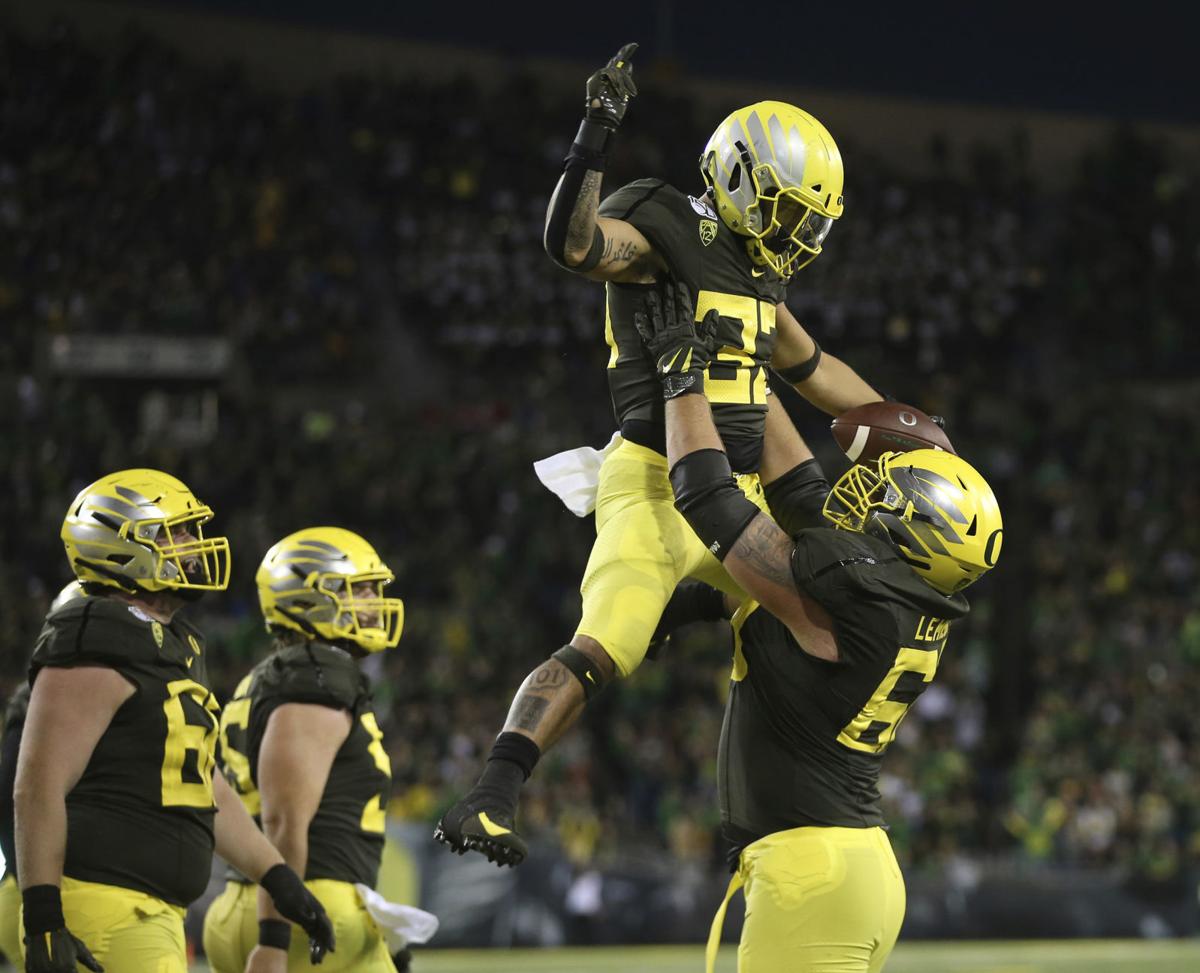 Oregon's Cyrus Habibi-Likio is hoisted in celebration by Shane Lemieux after scoring a touchdown against California during the third quarter of an NCAA college football game Saturday, Oct. 5, 2019, in Eugene, Ore. (AP Photo/Chris Pietsch) 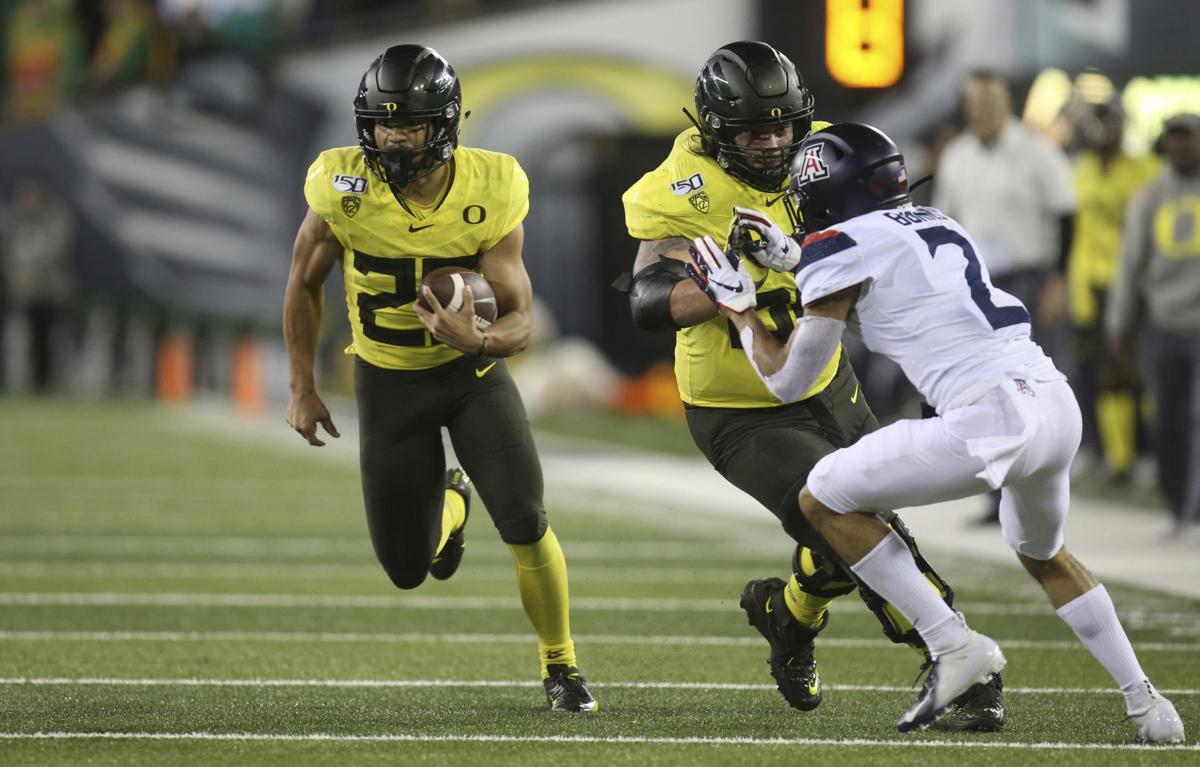 Oregon running back Travis Dye, left, gets a block from Shane Lemieux on Arizona's Lorenzo Burns, right, on his way to a fourth quarter touch down in an NCAA college football game Saturday, Nov. 16, 2019, in Eugene, Ore. (AP Photo/Chris Pietsch) 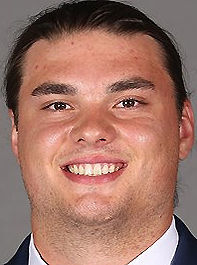 Oregon's Cyrus Habibi-Likio is hoisted in celebration by Shane Lemieux after scoring a touchdown against California during the third quarter of an NCAA college football game Saturday, Oct. 5, 2019, in Eugene, Ore. (AP Photo/Chris Pietsch)

Oregon running back Travis Dye, left, gets a block from Shane Lemieux on Arizona's Lorenzo Burns, right, on his way to a fourth quarter touch down in an NCAA college football game Saturday, Nov. 16, 2019, in Eugene, Ore. (AP Photo/Chris Pietsch)

Shane Lemieux came home to Yakima for the holidays earlier this week but the festivities of Christmas day had to be cut short a bit so he could catch a plane.

That was quite alright with Christy and Mike Lemieux since mom and dad and a sizeable family gathering will soon follow Shane to where he dashed off to on Wednesday — Pasadena, Calif.

Having a dream come true is a blessing enough.

But this came with perfect timing, too.

After starting 51 consecutive games over four years on Oregon's offensive line, the West Valley graduate will conclude his ironman collegiate career by playing in the 106th Rose Bowl when the Ducks face Wisconsin on New Year's Day.

"This is absolutely a dream way to go out," Lemieux said from Eugene last week. "It's beyond exciting for all of us, but I'm glad to be coming home for a couple days. A chance to relax and refresh for just a little while will be nice, then it's straight to Pasadena and back to work. It'll be an unbelievable week."

All that Lemieux invested over four years of intense labor came to a head during a 14-day span between Nov. 23 and Dec. 6, when the emotional and physical pendulum swung from one extreme to the other.

It started when Oregon lost at Arizona State, taking itself out of the chase for a national playoff spot. After a less-than-inspiring 24-10 win over Oregon State, the Ducks then headed to the Pac-12 championship game to face Utah, which has risen to No. 5 with an eight-game win streak.

Lemieux's veteran offensive line reasserted itself as the Ducks rushed for 239 yards in a convincing 37-15 victory. A week later he was named Associated Press second-team All-American.

"That game was definitely the highlight of my career and for a lot of us," said the 6-foot-4, 316-pound lineman. "Arizona State was a tough day for us and it was really emotional after, knowing our playoff hopes were done. But what we focused on was that everything was still in front of us. We were going to play for a Pac-12 championship, which had always been a goal of mine, and we still had a shot at the Rose Bowl."

Lemieux graduated last spring with a degree in criminal law and he, along with several juniors including quarterback Justin Herbert, considered departing for the NFL draft. But they decided to come back together with a shared quest. Right tackle Calvin Throckmorton, a third-team All-American who has also made 51 straight starts, was a freshman with Lemieux in 2016 when the Ducks were 4-8 and didn't go to a bowl game.

"We felt like we let the program and the alumni down," admitted Lemieux, who helped Oregon rise to seven wins in 2017 followed by a 9-4 season last year with a win over Michigan State in the Red Box Bowl. "This is what we all came back here to do. We all decided to stay in school and take this as far as we could. To win a conference title and have this opportunity to play in the Rose Bowl just seems right."

When Oregon last played in the Rose Bowl, Lemieux was a senior at West Valley and had already committed to the Ducks. He watched his future program dismantle Florida State 59-20 in 2015, when the Pasadena classic was a national semifinal, and then fall to Ohio State in the championship game.

Lemieux was a freshman — just a year after he started playing football — when the Ducks beat Wisconsin in the 2012 Rose Bowl, where Russell Wilson threw for 296 yards and two tocuhdowns for the Badgers.

"There are a lot of parallels with that season," he said of the Oregon-Wisconsin rematch. "That team lost its first game to LSU (this year it was Auburn), won nine in a row, lost a conference game late and then bounced back to win the conference championship. I remember that game because I've always been an Oregon fan. But the Florida State game is the Rose Bowl I remember most because they just dominated and I was so excited to be headed to Eugene."

Lemieux and the Ducks held their first on-site practice Thursday. Next Wednesday's game kicks off at 2 p.m.

After that, the transition from collegiate athlete to professional begins. Lemieux will represent Oregon one last time in the Senior Bowl on Jan. 25 and then dive directly into preparations for the NFL Draft in late April.

"That training starts as soon as I'm done with the bowl game," he said of the shift to NFL measurables. "There's not even a day off because you know other guys are working that hard."

Lemieux's resume establishes him as one of the nation's premier interior linemen and perhaps the top guard with his footwork, agility and strength. And when calling on the long-held truism that the best ability is availability, who's better than a guy who never missed a collegiate start?

Especially in the trenches.

"I absolutely take a ton of pride in that streak," he said. "It's something that's very important to me. When my number is called I've always wanted to be ready to go and never let my teammates down. I prepare in every way possible, take care of myself and do all the things necessary to stay of the field."

So now, after four long years, this is it for No. 68. For Oregon fans, it's hard to imagine anyone else wearing that number.

It's hard for Lemieux to imagine, too.

"It's funny because I wore 74 in high school and 68 was just handed to me when I got here," he said. "Now I don't want to let it go. It's who I am, and it's like we've gone on this long journey together."

One more time in the Granddaddy of them all.