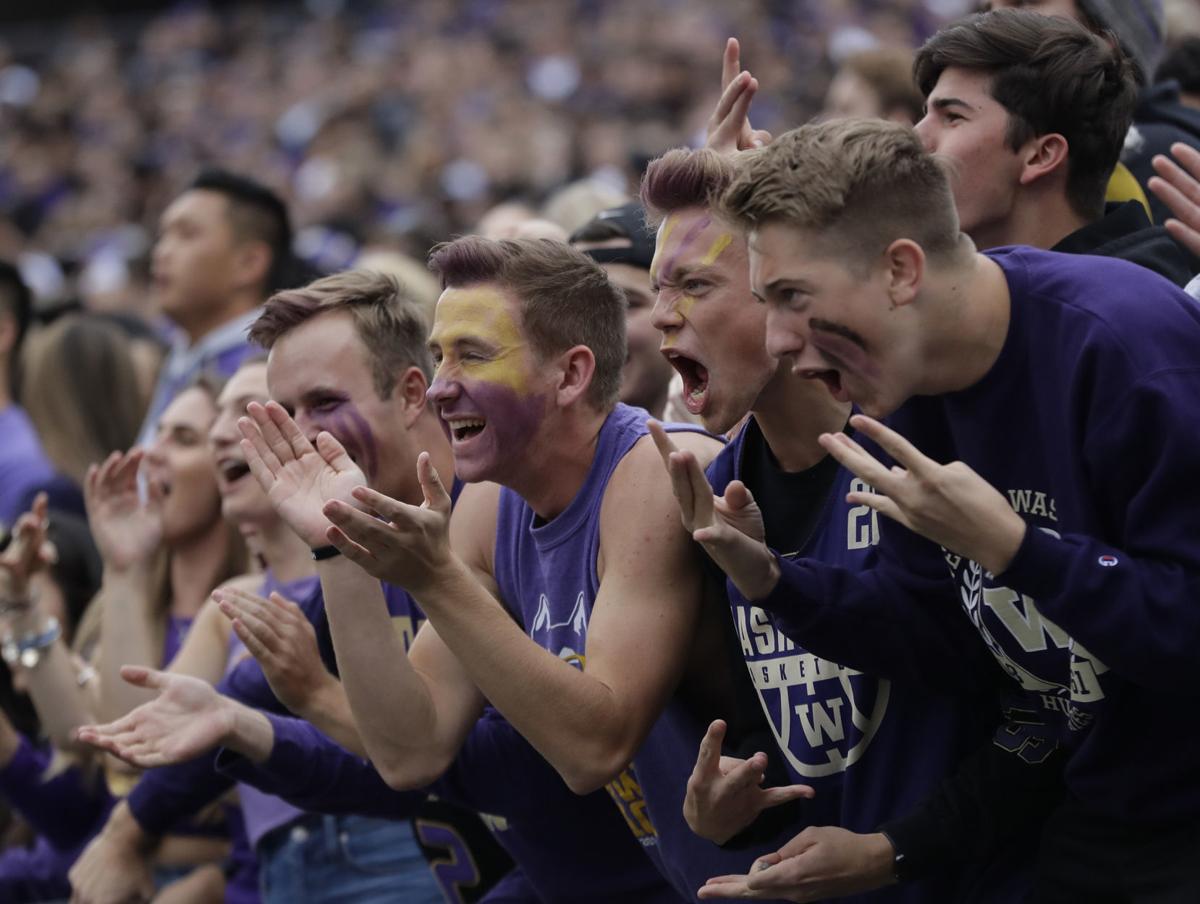 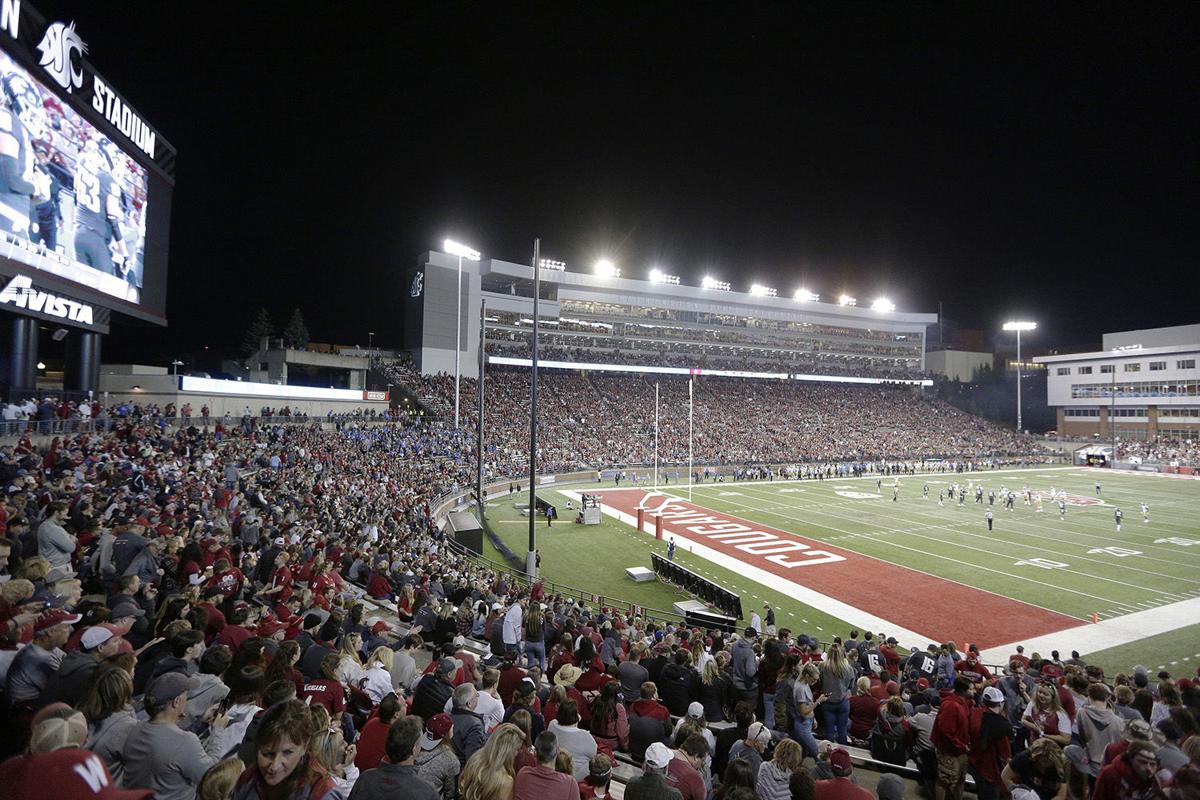 FILE - In this Sept. 21, 2019, file photo, fans watch the first half of an NCAA college football game between Washington State and UCLA at Martin Stadium in Pullman, Wash. While professional sports leagues can ponder plans to isolate their athletes from the coronavirus and have them play in unusual, even secluded places, college sports have no such option. Pro sports leagues can get creative with solutions to save their multibillion-dollar businesses. College sports will take a slower road back. (AP Photo/Young Kwak, File)

FILE - In this Sept. 21, 2019, file photo, fans watch the first half of an NCAA college football game between Washington State and UCLA at Martin Stadium in Pullman, Wash. While professional sports leagues can ponder plans to isolate their athletes from the coronavirus and have them play in unusual, even secluded places, college sports have no such option. Pro sports leagues can get creative with solutions to save their multibillion-dollar businesses. College sports will take a slower road back. (AP Photo/Young Kwak, File)

SEATTLE — On Sept. 22, 1990, Prime Network aired a pre-recorded interview with USC head coach Larry Smith prior to his team’s Pac-10 opener at No. 21 Washington.

“Playing in Husky Stadium is always a difficult task — I think particularly when they’re going to have a sellout crowd and it’s such an important game in the conference,” Smith said, blissfully oblivious to the beating to come. “The crowd noise really forces your team to, uh … you can’t hear a thing on the field. So your audibles and that type of thing, your checks, are virtually out the door.”

As were the Trojans’ chances. In 92-degree heat, with a sellout crowd of 72,617 stuffed inside a sizzling Husky Stadium, USC quarterback Todd Marinovich promptly melted into the turf. He completed 7 of 16 passes for 80 yards and a pair of interceptions, and UW shut out USC, 31-0.

When UW’s opponents scan the Husky Stadium stands this fall, they might not see much of anything.

That’s because, in a sports world rearranged by COVID-19, it’s entirely possible college athletics are played without fans in the stands. Even in the “best-case scenario” — completed seasons with full fan attendance — UW is projecting a 10-12% dip ($4.4 million) in gate revenue in the 2020-21 academic year, due to “fan discomfort/economic downturn.” A Seton Hall University poll last month with 762 participants indicated that 72% would not attend games without the development of a COVID-19 vaccine.

But even on that point, opinions vary.

“There have been a couple organizations that have done fan surveys across the country around college sports and what people are looking for,” UW athletic director Jen Cohen said last Friday. “There is a much higher percentage of fans nationally that want to go back into college sport venues than not. Then there’s interesting data about what would make them feel safe — everything from hygiene stations to temperature checks.

In a separate interview, Washington State athletic director Pat Chun added that “the only certainty is there is going to be an impact. There’s going to be some type of anxiety level, whether it’s from a health and wellness standpoint or a financial standpoint. So those are realities that we have to factor in. There’s every expectation that there will be social distancing measures that have to be put into place.”

But what might those measures look like? This month, the Miami Dolphins unveiled plans to cap attendance at Hard Rock Stadium — capacity 65,326 — at 15,000 fans for the coming NFL season. Team president Tom Garfinkel told Good Morning America that “we would have times to come in for security at different gates so people would be separated out in terms of when they enter the stadium. We would exit the stadium much like a church environment, where each row exits so people aren’t filing out all at the same time in a herd.” Fans — who would be required to wear masks — could order food and drinks from their seats rather than forming lines.

But, in a restricted attendance scenario, how do you decide who gets tickets and who doesn’t?

Pac-12 projections may be a tad more pessimistic. In Oregon, Gov. Kate Brown said this month that large gatherings will be banned through at least September. Meanwhile, Washington’s four-phase reopening plan could — in the best-case scenario — allow for large gathering as early as July 13.

“I don’t think you are going to see crowds in stadiums (this summer),” Seattle Mayor Jenny Durkan said this month in a video interview with Peter Hamby of Good Luck America on Snapchat. “I don’t know if you saw it, but in Taiwan, they had their first games and they actually had mannequins in the seats. You may get virtual fans. But I think there is going to be enough challenges to get players to different cities. So I don’t see crowds in our near future. But I think we can be innovative in different ways.”

Cohen said that “if the timelines of the governor’s phase approach follow through and we have the opportunity to have fans engaged in our venues, it’s certainly not going to look like we’re used to it looking.”

It’s not going to look — or sound — like Sept. 22, 1990, when Marinovich pleaded with the referees to attempt to quiet a sellout crowd. And it also may look different depending on where you live.

“I think the interesting thing about this is that it could potentially vary based on what state you’re living in,” Cohen said. “That’s so different than anything that any of us have ever tackled. So we’re learning. We’ve got pro sports competing in Europe and Asia. We’ve got sports teams starting to compete here and major professional teams starting to share their plans. All of that is going to inform our decision-making and it’s going to help us understand how to implement the best strategies, especially for fan engagement.

“But the reality is that we will be following the governor’s guidelines for large gatherings, and within that local and public health officials and university guidelines around that.”

And it’s possible those guidelines ultimately won’t allow fan attendance in any form. In that scenario, WSU announced last week that season ticket-holders will have three options for their previously purchased tickets: donate the payments to WSU as a tax-deductible gift, convert them to a credit for future purchases, or receive a refund.

UW — which has already renewed 87.2% of its season tickets, worth $21 million — has yet to unveil an official plan, but Cohen confirmed there would be a campaign to convert those payments into gifts, as well as the option to receive a refund.

“We’re a school, like many, that has to operate at above 90% season ticket renewal rates,” Chun said. “When everything hit (with COVID-19) we were actually at about 80%. Last year we were at 91% season ticket renewal. So we were actually at a healthy number, and as we started to reach out to the 10% that had not renewed, it became pretty clear that it’s a segment of our market that had some hesitancy, and rightfully so, about the unknowns that are out there. So we just wanted make sure we were being proactive in how we communicate with all of our customers just so there’s no ambiguity in what their options are going to be.

“The goal for us is that we’re going to play 12 games. We’re scheduled to have seven of them in Pullman, and we’re going to work hard for those goals this year. Our president and our campus is working hard to have fall campus in person here in Pullman. But we want you to know that we’re thinking through backup scenarios in case that doesn’t happen.”