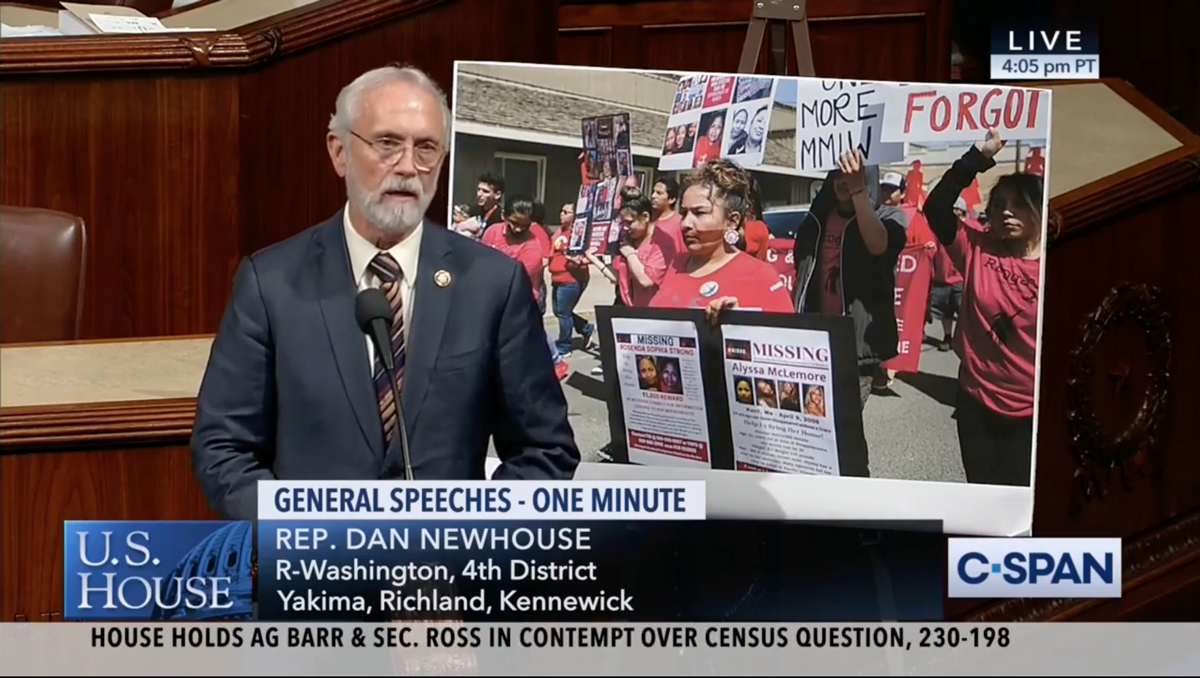 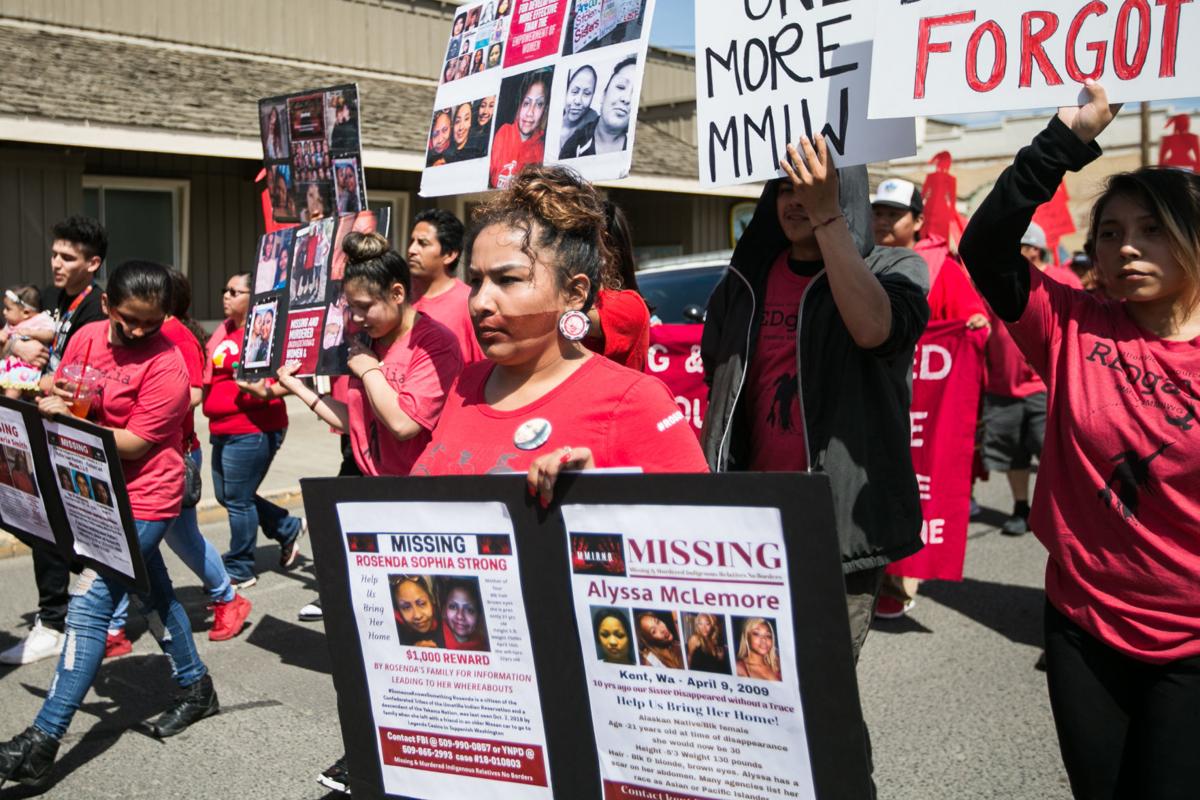 Cissy Reyes Strong holds a missing persons sign of her sister, Rosenda Strong, while walking in the national Missing and Murdered Indigenous Women march on May 5, 2019, on West First Avenue in Toppenish, Wash.

Cissy Reyes Strong holds a missing persons sign of her sister, Rosenda Strong, while walking in the national Missing and Murdered Indigenous Women march on May 5, 2019, on West First Avenue in Toppenish, Wash.

A Yakima Valley legislator honored a missing Native woman whose body was recently found near Toppenish, urging congressional action on the issue of missing and murdered indigenous women throughout the United States.

Addressing his fellow members of the House of Representatives, Dan Newhouse, R-Sunnyside, spoke Wednesday of Rosenda Strong as he stressed the need to stem the violence that has disproportionately plagued Indian Country for centuries.

“Mr. Speaker, sadly I rise again today to speak about the epidemic of missing and murdered indigenous women,” Newhouse said as he stood near a large Yakima Herald-Republic photo of Rosenda Strong’s sister, Cissy Strong Reyes, as she participated May 5 in the second annual REDgalia Awareness Walk in Toppenish.

Authorities confirmed July 12 that remains found in a freezer near Toppenish late in the afternoon of July 4 were those of Strong, a mother of four. She would have turned 32 on April 16.

The remains were positively identified with dental records, Yakima County Coroner Jim Curtice said. Strong’s death has been classified as a homicide and the cause remains under investigation.

Strong was last seen in Toppenish on Oct. 2, when she left her sister’s home with an acquaintance to visit Legends Casino. She is among dozens of Native girls and women who have gone missing on or near the 1.3-million-acre Yakama reservation. Many cases of missing people or mysterious deaths of Native women and men remain unsolved.

All members of Congress have an opportunity to speak on the floor and submit their remarks to the official Congressional Record every day they are in session. In his remarks, Newhouse noted that Strong is among at least 71 unsolved cases throughout Washington state of missing and murdered Native women.

“The life of this young mother of four was not lost but taken, as are the lives of many other Native American woman across the nation,” he said of Strong, a citizen of the Confederated Tribes of the Umatilla Indian Reservation and a descendant of the Yakama Nation.

Since Strong went missing, her family and friends have rallied to bring national attention to the alarmingly high murder and violence rates among Native American women across the country, Newhouse said. Strong’s story has appeared on CNN and Inside Edition and in the New York Post, among other media outlets.

“Children are left without mothers. Parents are left without daughters and communities are left questioning their safety and their future,” Newhouse added. “This crisis can no longer be ignored. Congress must act to deliver justice to victims like Rosenda and so many others like her.”

U.S. Rep. Deb Haaland, D-N.M., praised Newhouse for his remarks. “Thank you for raising the stories of #MMIW on the House Floor, Rep. Newhouse,” she tweeted on Thursday.

Haaland, Newhouse and U.S. Rep. Norma Torres, D-Calif., introduced Savanna’s Act legislation in mid-May. Originally introduced in 2017, it stalled in the House in late 2018 after unanimously passing the Senate. It would create new guidelines for reporting and investigation of missing and murdered Native people and improve data collection and communication among law enforcement agencies and families.

In late May, Newhouse held a private roundtable in Yakima to hear about local efforts to address the crisis. He mentioned then he wanted to request a field hearing in Central Washington where committees and members of Congress could learn firsthand about the crisis.

Central Washington sits at the epicenter of this crisis, Newhouse wrote. In the past five years, he said, seven women have been murdered or have gone missing in his congressional district.

“As the Department of the Interior continues to work with tribes to address the MMIW crisis,” he wrote, “I invite the department to Central Washington to speak with a diverse community of tribal and law enforcement stakeholders about their experiences on the front lines of the crisis, Interior’s work with indigenous communities, and how legislative proposals, like Savanna’s Act, would help communities serve justice for indigenous women and their families.”

"We have her back; not the way we wanted." Body near Toppenish confirmed as Rosenda Strong

Authorities: Body found in freezer near Toppenish confirmed to be Rosenda Strong

Letter to Secretary of the Department of the Interior

WASHINGTON, D.C. — Members of Congress spent an hour on the House floor on Wednesday talking about ways to deliver justice to Native American …

Rep. Dan Newhouse (R-Sunnyside) spoke on the House floor to remember Rosenda Strong, citizen of the Confederated Tribes of the Umatilla, and t…