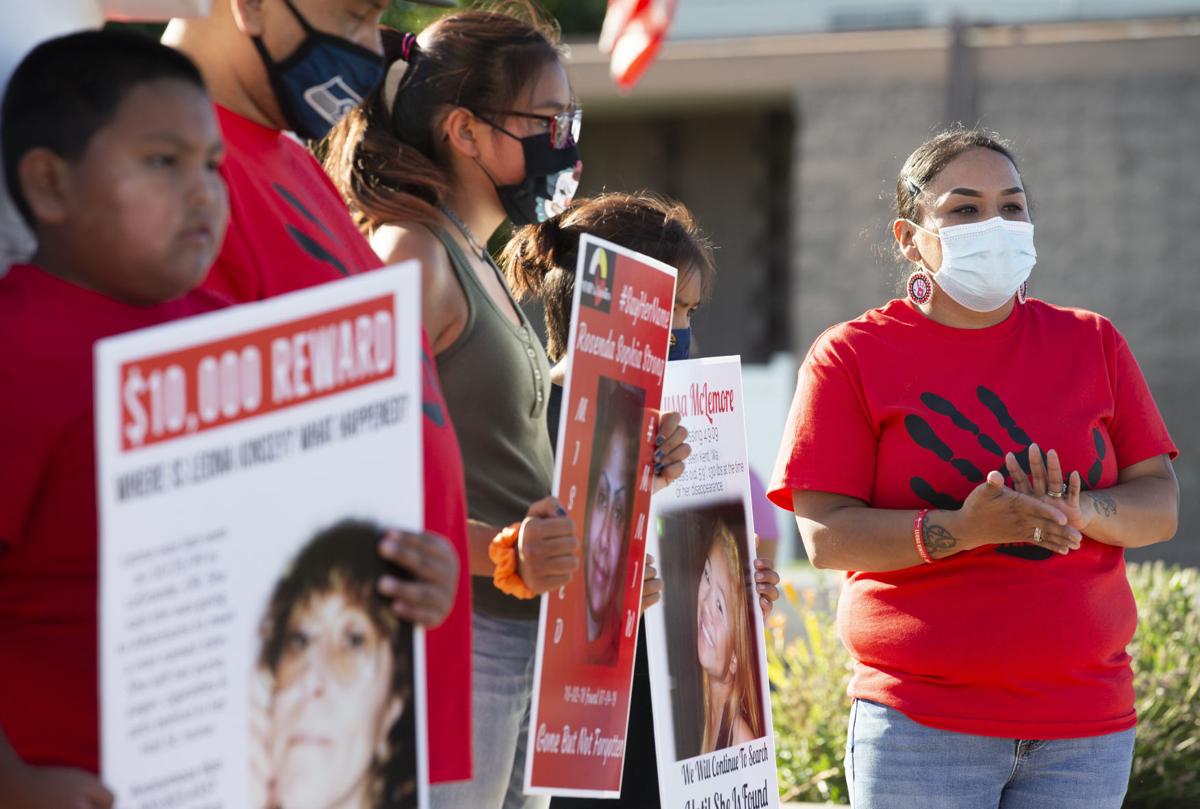 Cissy Strong Reyes, right, talks to a crowd of more than 40 people about her sister Rosenda Sophia Strong and other missing and murdered indigenous people at Pioneer Park on Sunday, July 12, 2020, in Toppenish, Wash. Sunday marked the one-year anniversary of the confirmation of Rosenda Sophia Strong's remains after they were found on July 4, 2019. 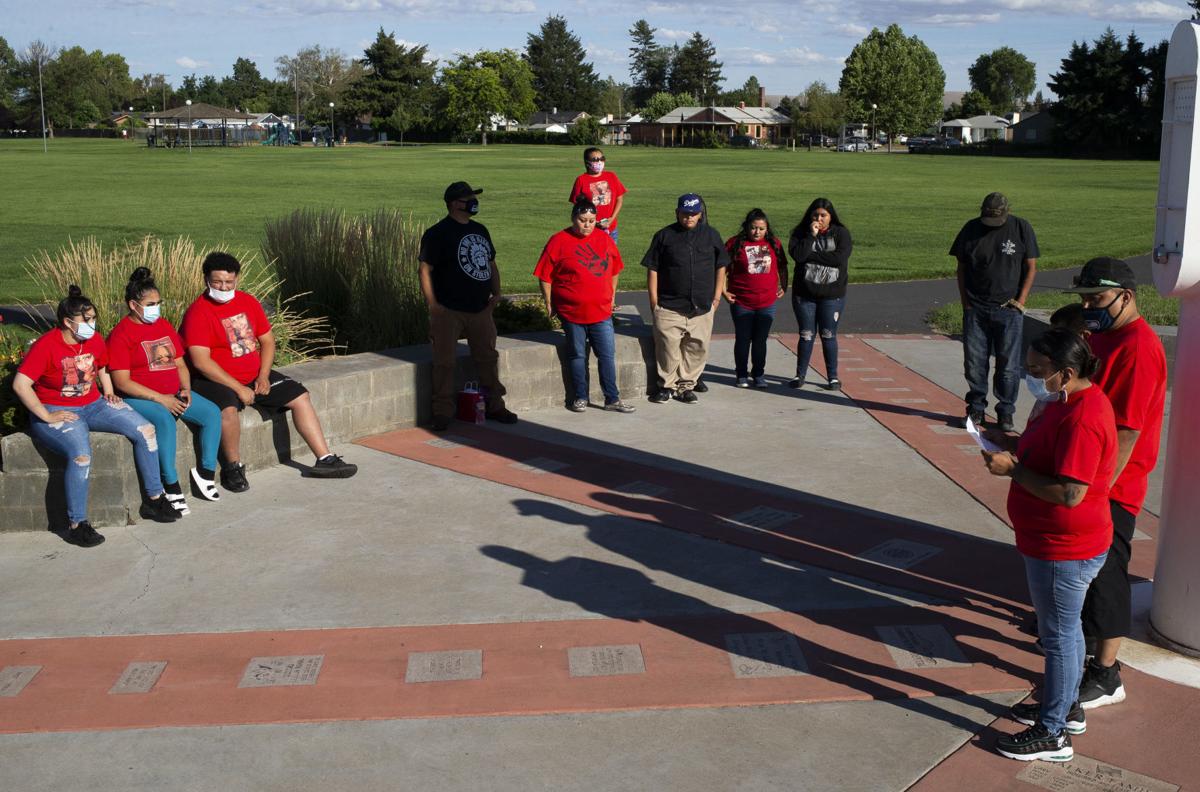 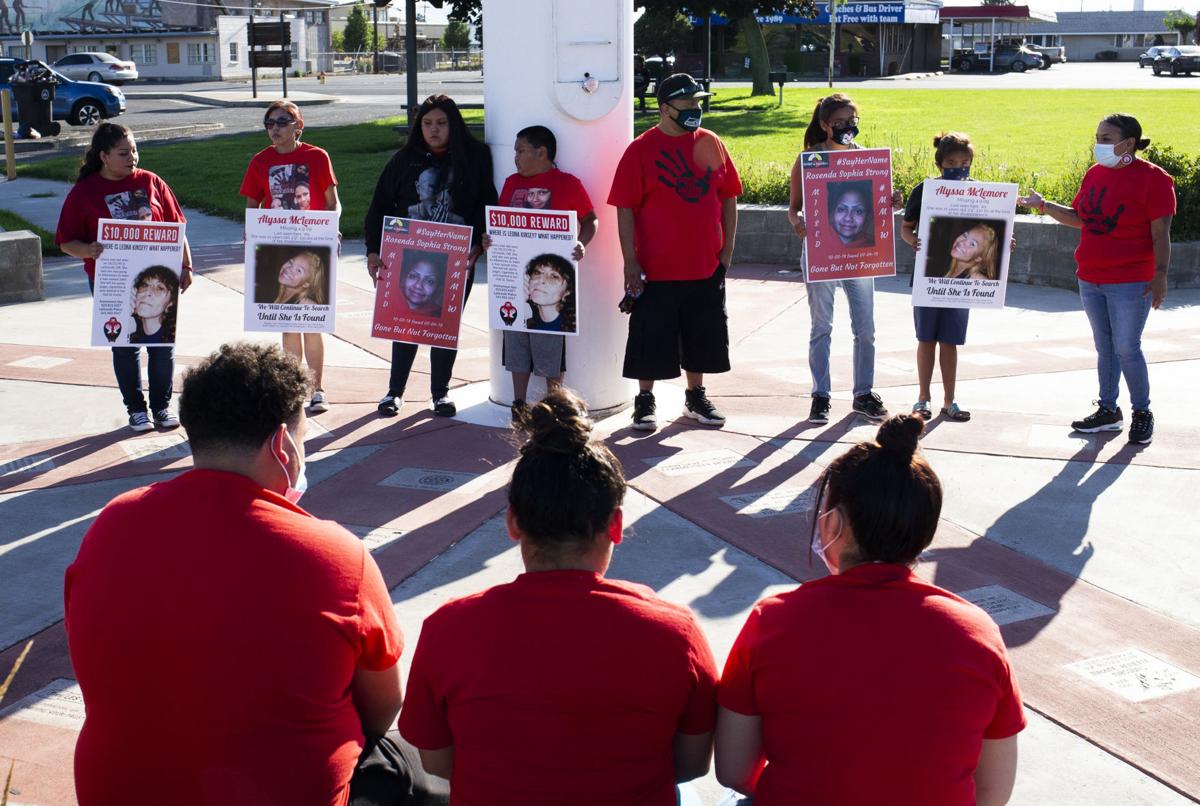 Cissy Strong Reyes, right, talks to a gathered crowd of more than 40 people about her sister Rosenda Sophia Strong and other missing and murdered indigenous people at Pioneer Park on Sunday, July 12, 2020, in Toppenish, Wash. Sunday marked the one-year anniversary of the confirmation of Rosenda Sophia Strong's remains after they were found on July 4, 2019.

Cissy Strong Reyes, right, talks to a crowd of more than 40 people about her sister Rosenda Sophia Strong and other missing and murdered indigenous people at Pioneer Park on Sunday, July 12, 2020, in Toppenish, Wash. Sunday marked the one-year anniversary of the confirmation of Rosenda Sophia Strong's remains after they were found on July 4, 2019.

Cissy Strong Reyes, right, talks to a gathered crowd of more than 40 people about her sister Rosenda Sophia Strong and other missing and murdered indigenous people at Pioneer Park on Sunday, July 12, 2020, in Toppenish, Wash. Sunday marked the one-year anniversary of the confirmation of Rosenda Sophia Strong's remains after they were found on July 4, 2019.

Because of the COVID-19 pandemic, she didn’t embrace as many people as she usually does and wore a mask during a memorial for her sister Sunday at Pioneer Park.

Many others in the crowd of about 50 people wore face masks, and Reyes handed out face coverings, hand sanitizer and water on the warm, breezy evening.

“I miss her every day,” Reyes said of Strong as she stood before the group gathered around the flagpole. “I should not be here. Nobody should be in my position.”

Reyes and their brother, Christopher Strong, and Rosenda’s oldest daughter, Karman Strong, thanked them all for coming. They expected a smaller group and appreciated that so many came to be with them a year to the day that Rosenda Strong’s remains were identified.

“I miss her every day,” Karman Strong said.

A 31-year-old mother of four, Rosenda Strong went missing Oct. 2, 2018, after leaving Reyes’ house with an acquaintance to visit Legends Casino in Toppenish. Her remains were found in an abandoned freezer on July 4, 2019, less than four miles from Reyes’ house, and were positively identified July 12 with dental records. Her death was classified as a homicide.

Family and friends gathered at Pioneer Park on July 14, 2019, to remember Strong. At that point, the FBI’s investigation into her death was just beginning. Though Strong’s body remains at the laboratory, Reyes is hopeful that won’t be the case much longer.

“Please pray for us that we get our sister home soon and she can be buried,” Reyes said. She has been preparing for the day they can place her beside their mother on the Umatilla Reservation.

Strong is among dozens of women and girls, men and boys who have disappeared, have been murdered or died mysteriously on and around the 1.3-million-acre Yakama Reservation over decades. Some people have been missing for decades. Many cases remain unsolved.

“The last people she was with were her friends,” she said. “It’s really hard because I see them out in the community.”

Elaine Snowder, Strong’s aunt, spoke at the memorial event a year ago. Reyes didn’t invite elders, who are at greater risk of becoming sickened and killed by COVID-19, and asked Snowder not to come. Instead, Reyes read a letter from Snowder.

“What became of my niece Rosie should not have happened,” Snowder wrote. She urged parents to keep in contact with their children and help them as best they can if they’re struggling.

“We don’t want them out in the community lost, confused,” she wrote. “It’s not safe out there.”

Strong loved her children and always spoke of them, Snowder said.

“Keep Rosenda’s children in your prayers. Not having their mom is going to be a big void in their life while growing up,” she added.

In the months after Strong went missing and after her remains were found, Reyes has wanted to give up at times but couldn’t. Some have feared for her safety, but she won’t stop.

“You’ve got to break the silence. Everybody that breaks the law needs to be accountable,” she said.

Reyes and others also stood in front of the crowd with posters showing Alyssa McLemore, a young Native mother who went missing from Kent more than 10 years ago, and Leona LeClair Kinsey, a member of the Puyallup Tribe who was living in La Grande, Oregon, when she disappeared in October 1999.

“I’m thankful my sister was found. These two (women), they’re still missing,” Reyes said. “We share their flyers. I say their names every night before I go to bed.”

She also mentioned Jon Cleary and Josiah “Jo” Hilderbrand, two California men who disappeared in early June 2019 during their drive to a Dead & Company concert at The Gorge Amphitheater in George. They are believed to have been murdered and their relatives are pleading for information, offering a $25,000 reward, with up to an additional $10,000 recently offered by federal investigators.

“Those two need to be brought home home also. They do not belong on this reservation,” Reyes said. “They need to go home.”

People are supposed to be looking out for each other, not hurting each other, Reyes said. She offered her support to those with missing and murdered loved ones and urged them to do what they can for their relatives and friends.

“Take care of your loved ones,” she said. “One day they might not be here.”

"We miss you every day, every second."

This summer has been busier than usual for Cissy Strong Reyes. She got a new job and has bee…

With confirmation that a body found July 4 in an abandoned freezer was her missing sister, C…

Anyone with information about the murder of Rosenda Sophia Strong is asked to call the Yakama Nation Police Department at 509-865-2933 or the FBI at 509-990-0857 regarding case number 18-010803. Submit tips electronically at tips.fbi.gov.

A letter to leaders of the U.S. House of Representatives urges action on legislation to address the crisis of missing and murdered Indigenous …