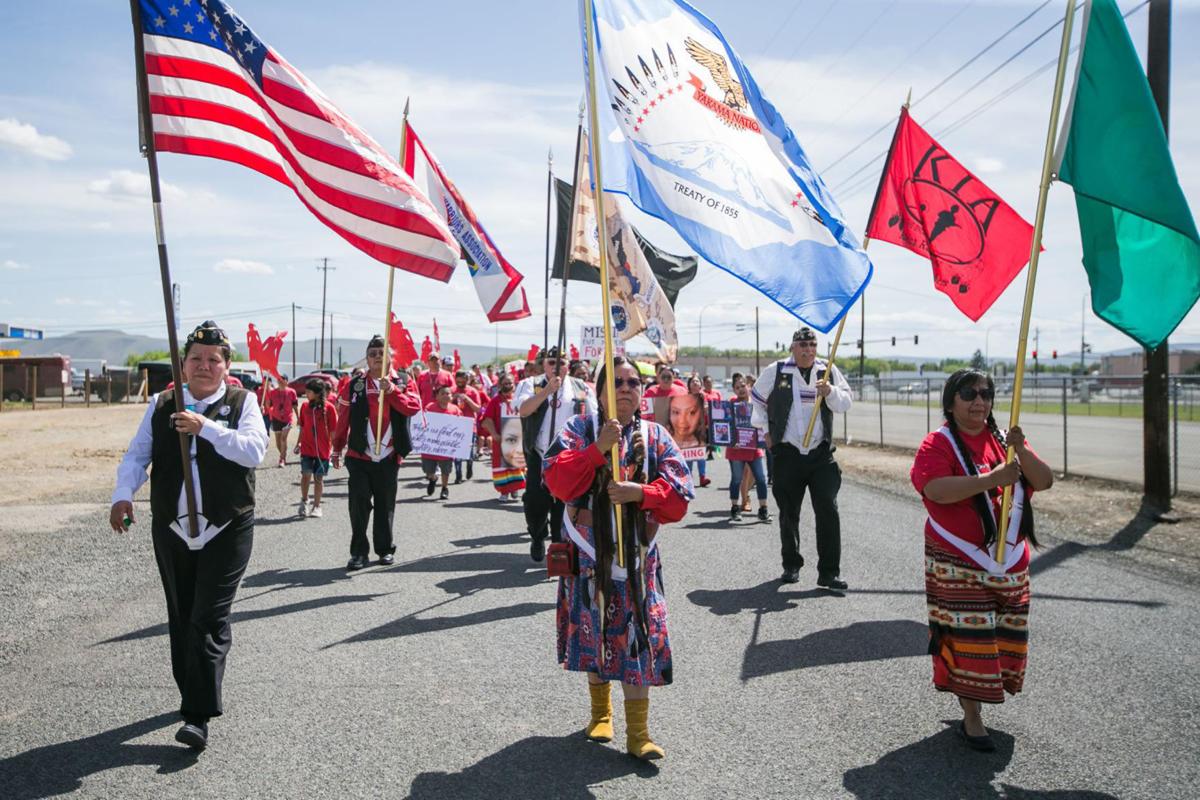 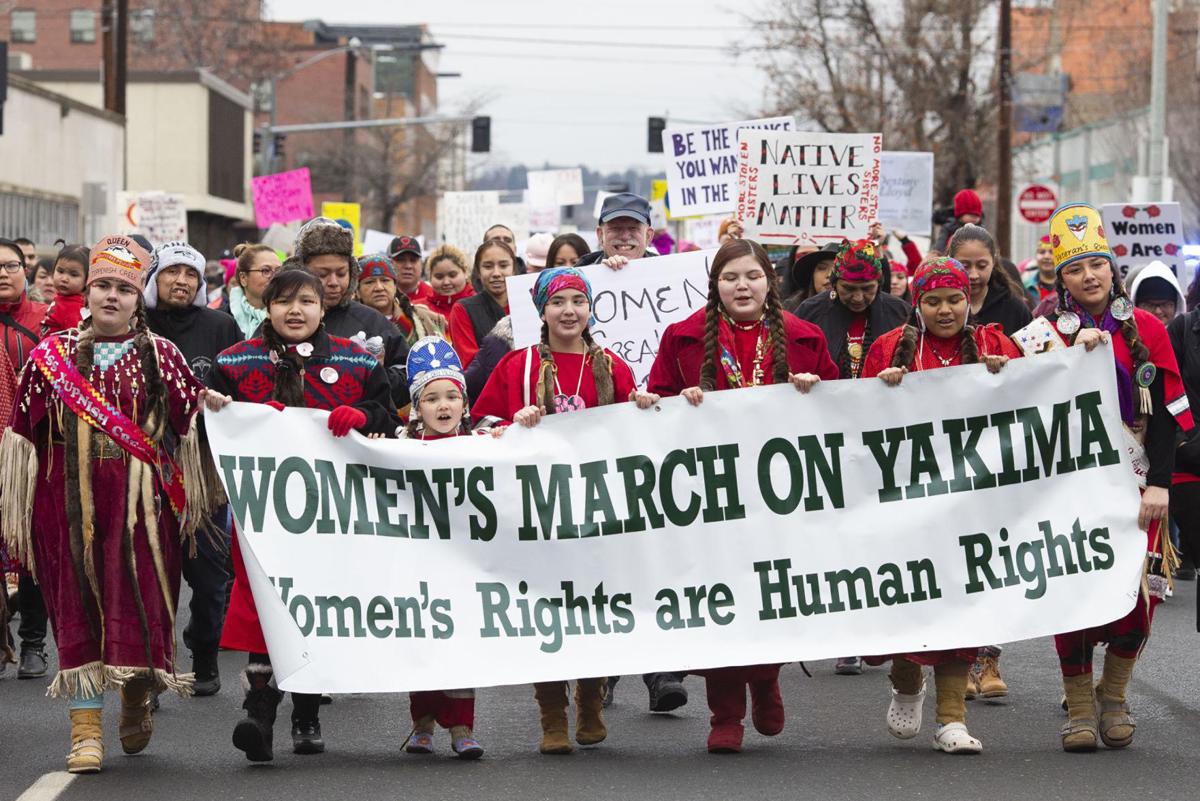 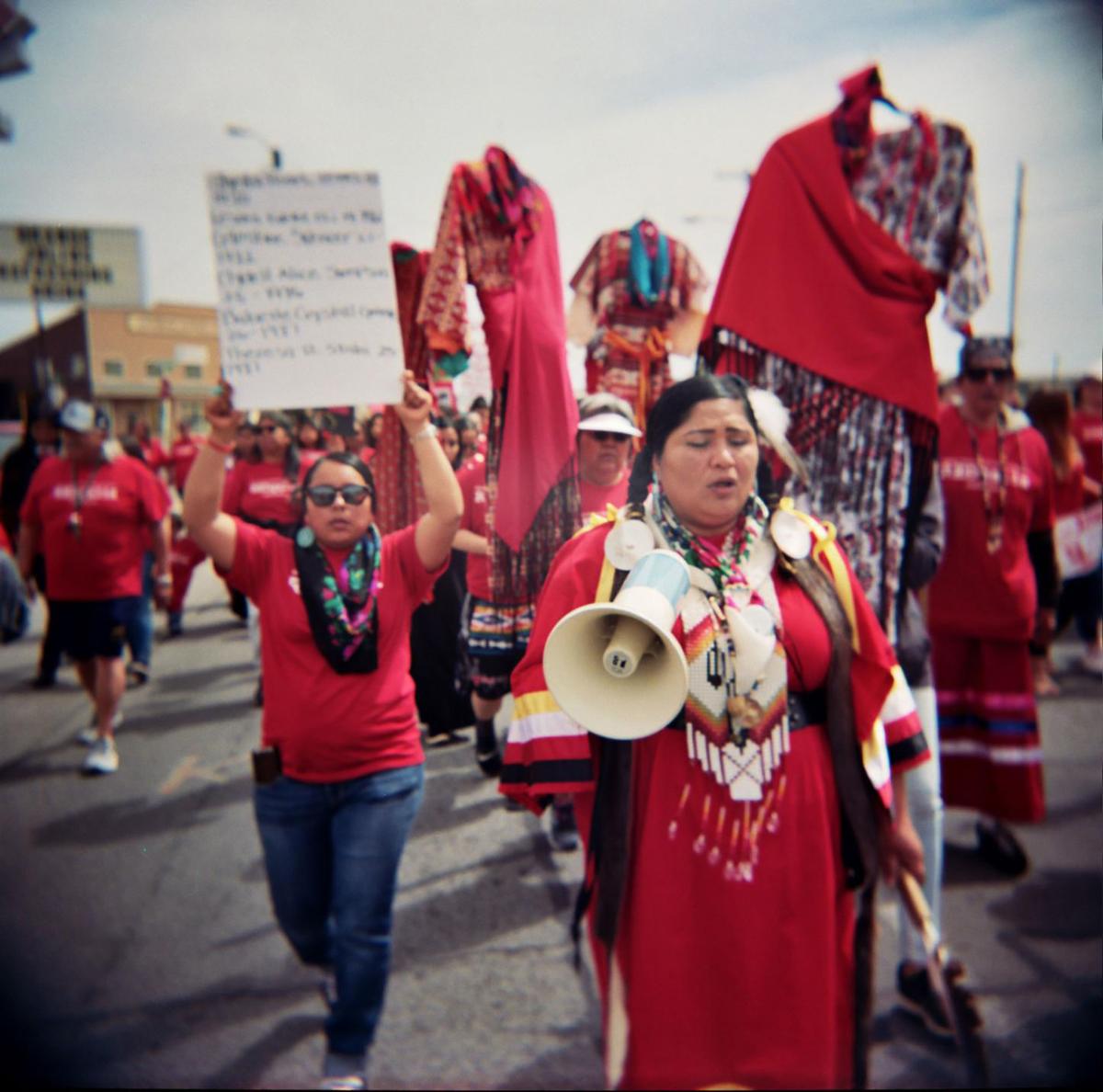 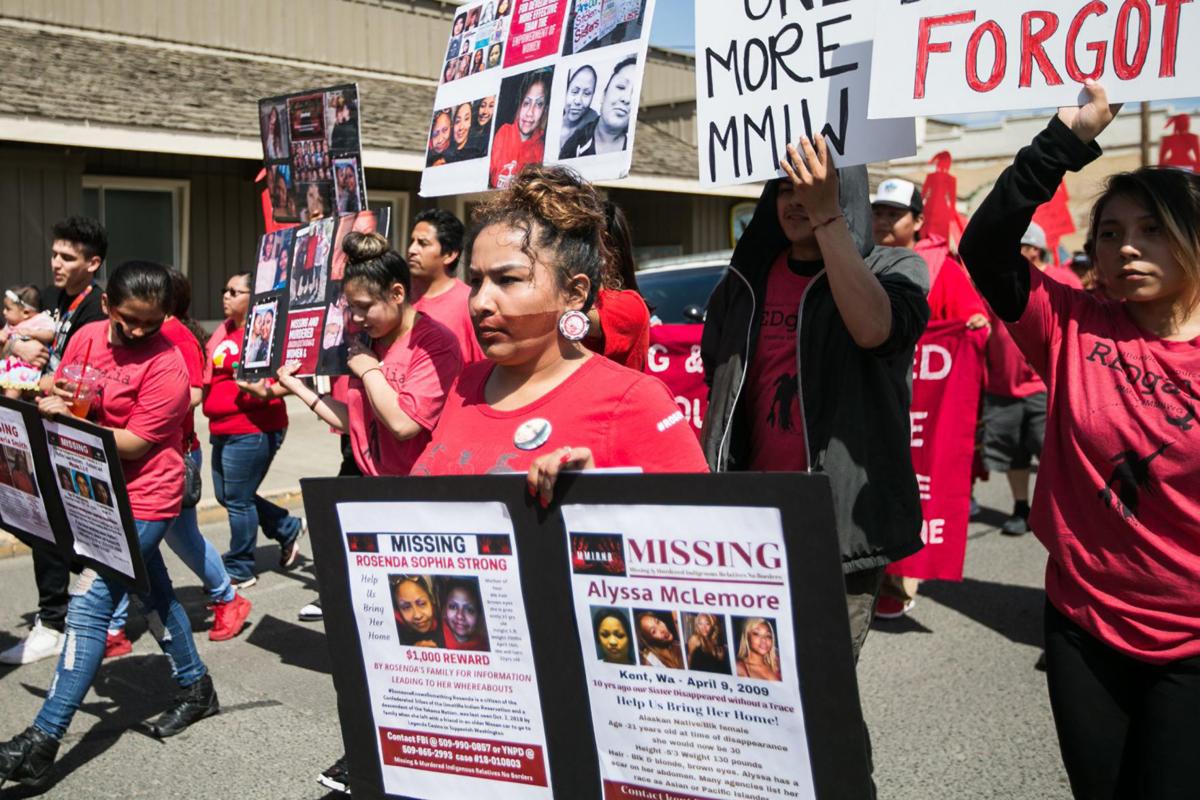 May 5 is the national day of awareness for Native women and girls who have gone missing and have been murdered. Some who joined the walk in Toppenish also highlighted indigenous men and boys whose disappearances and deaths are unsolved.

Crowds aren’t allowed this year because of the novel coronavirus, which also meant cancellation of a symposium set for Monday and today at Legends Casino Hotel. An all-day listening session also scheduled at Legends on May 21 by a presidential task force is postponed because of Gov. Jay Inslee’s stay-at-home order.

While in-person events aren’t happening, many will wear red today and plan other special efforts for their loved ones, along with events on social media and videoconference platforms like Zoom.

“We need to keep these issues front and center even as we cannot come together in real space,” Jacqueline Keeler said during a Facebook livestream event Monday on the Pollen Nation magazine page to remember missing and murdered Native women and girls. Keeler, of Portland, is a Navajo/Yankton Dakota Sioux writer and author who is the magazine’s editor.

The livestream featured Cissy Strong Reyes, who thinks of her younger sister, Rosenda Sophia Strong, every day and works to keep her name and story in the public eye. Strong went missing on Oct. 2, 2018, after going to Legends Casino, just a few miles from her home, with an acquaintance.

Strong’s family will light candles at 4:20 p.m. Tuesday, which was the approximate time on July 4, 2019, when two homeless men opened an abandoned freezer in a field near Toppenish and found human remains within. The remains were positively identified as Strong’s on July 12 and her death has been ruled a homicide. The investigation continues and anyone with information is asked to call the Yakama Nation Police Department at 509-865-2933 or the FBI at 509-990-0857 regarding case number 18-010803.

“I will be lighting candles live on Facebook. So whoever wants to join me, if they have a shirt of my sister, wear it, wear your REDgalia, anything red to remember Rosenda Strong” and the dozens of others missing on the Yakama Reservation, Reyes said during Monday’s livestream on Facebook.

“(Tuesday) we should be out there; we should be getting more vocal about the missing not just on this reservation but all the reservations,” Reyes said. “And having COVID-19 taking some of our people makes it harder.”

The epidemic of sexual and physical violence has disproportionately plagued indigenous women and girls throughout the country and beyond for decades. No one knows exactly how many Native women and girls have gone missing on or around the 1.3-million-acre Yakama Reservation. Numerous cases of missing people or mysterious deaths of women and men remain unsolved.

In the last few years, the crisis has received greater attention on the local, state and federal levels. Legislation has centered on getting better data on how many indigenous people are missing, creating better processes to report and find missing people and smoothing communication and cooperation on and near reservations, which often involves a daunting patchwork of jurisdictions.

Among that legislation is Savanna’s Act, which passed the U.S. Senate on March 11 and is now in the House of Representatives. And on Monday, state Attorney General Bob Ferguson announced he’s leading a coalition of 24 attorneys general urging the Senate to reauthorize the Violence Against Women Act, which expired more than a year ago.

The coronavirus pandemic is putting domestic violence victims and survivors at further risk, Ferguson said in a news release.

On the local level, the Yakima Valley Community Foundation created a designated fund called Native Women in Action with a gift from local philanthropists Doug and Laurie Kanyer. The fund supports the work of Emily Washines, a Yakama historian and scholar, and others as they work toward justice for local missing and murdered indigenous women and the healing of families and communities.

Washines and others were scheduled to visit Washington, D.C., to speak with legislators, but the trip was canceled as the coronavirus began to spread. The work continues, said Sharon Miracle, president and CEO of the community foundation.

Because of lost chances to connect in person and show support in public, the coronavirus pandemic has created challenges for advocates and loved ones of missing and murdered indigenous people. But as Deborah Maytubee Denton of Portland said during Monday’s livestream, it has brought other opportunities.

“What I’m seeing through Zoom, going live on Facebook, is giving us some different platforms that bring in more people,” said Denton, advocate and founder of the Missing and Murdered Indigenous Women USA Facebook page and website.

“I think that it’s different but it’s still really useful and we’re reaching a ton of people who would not be able to come into town and see an event,” she said.

Washines also participated in the livestream and mentioned the National Indigenous Women’s Resource Center lists several ways to bring awareness of missing and murdered Native women and girls, as detailed on its website. Or doing so could be as simple as wearing red, the color adopted by advocates on the issue.

“May we take a moment to commemorate all the women and families in our community impacted by the missing and murdered crisis,” she said.