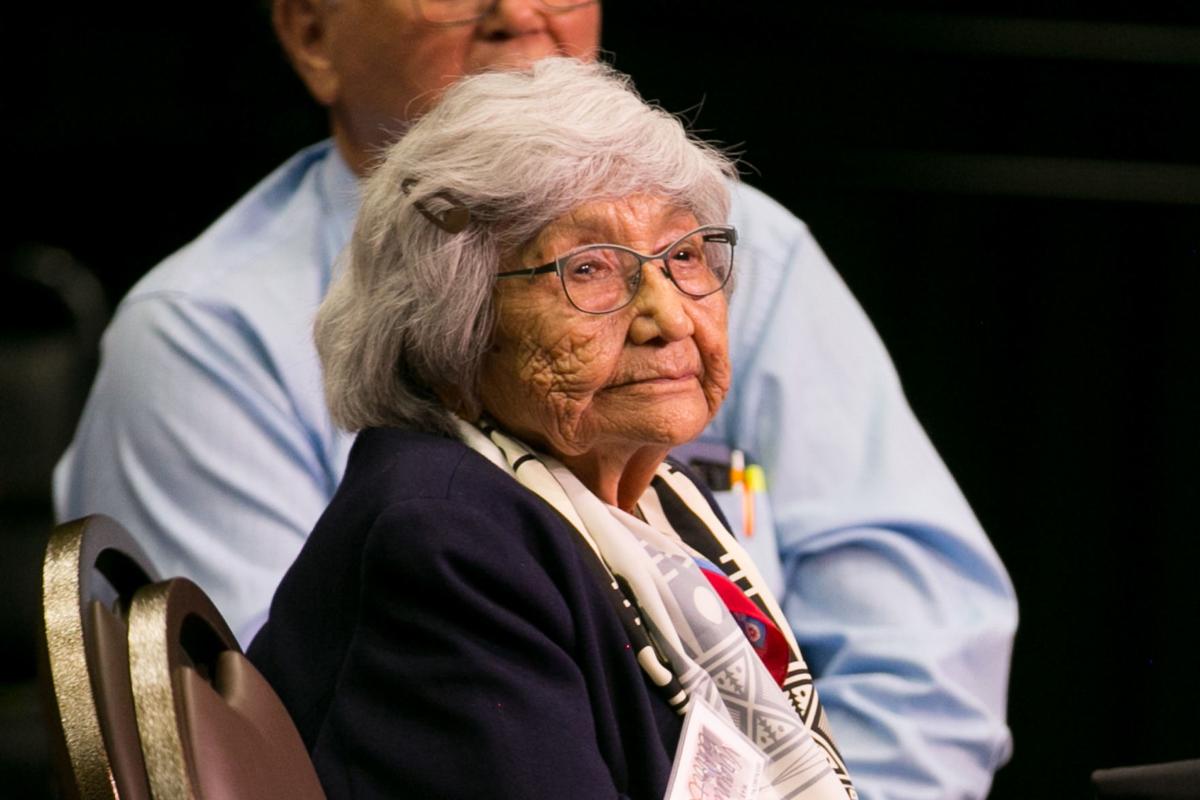 Virginia Beavert, 97, was honored Saturday for her work on languages spoken by Native people in the Columbia River system. 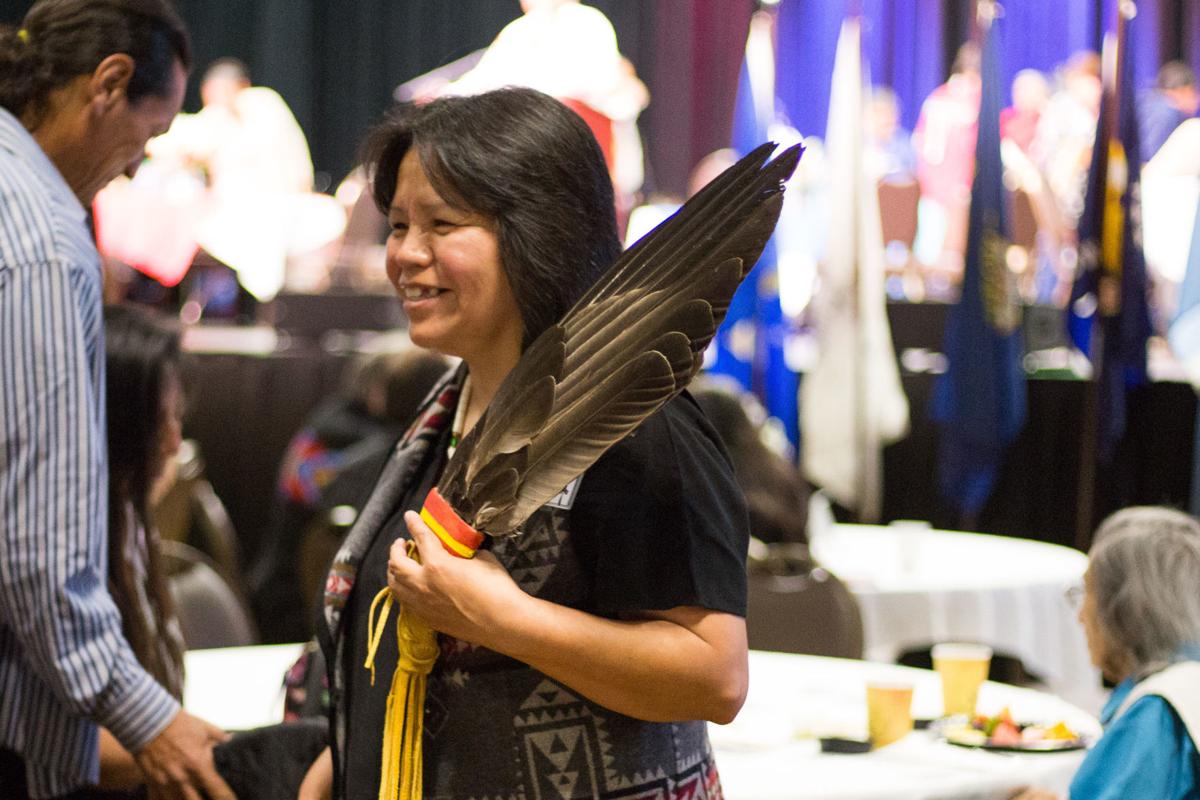 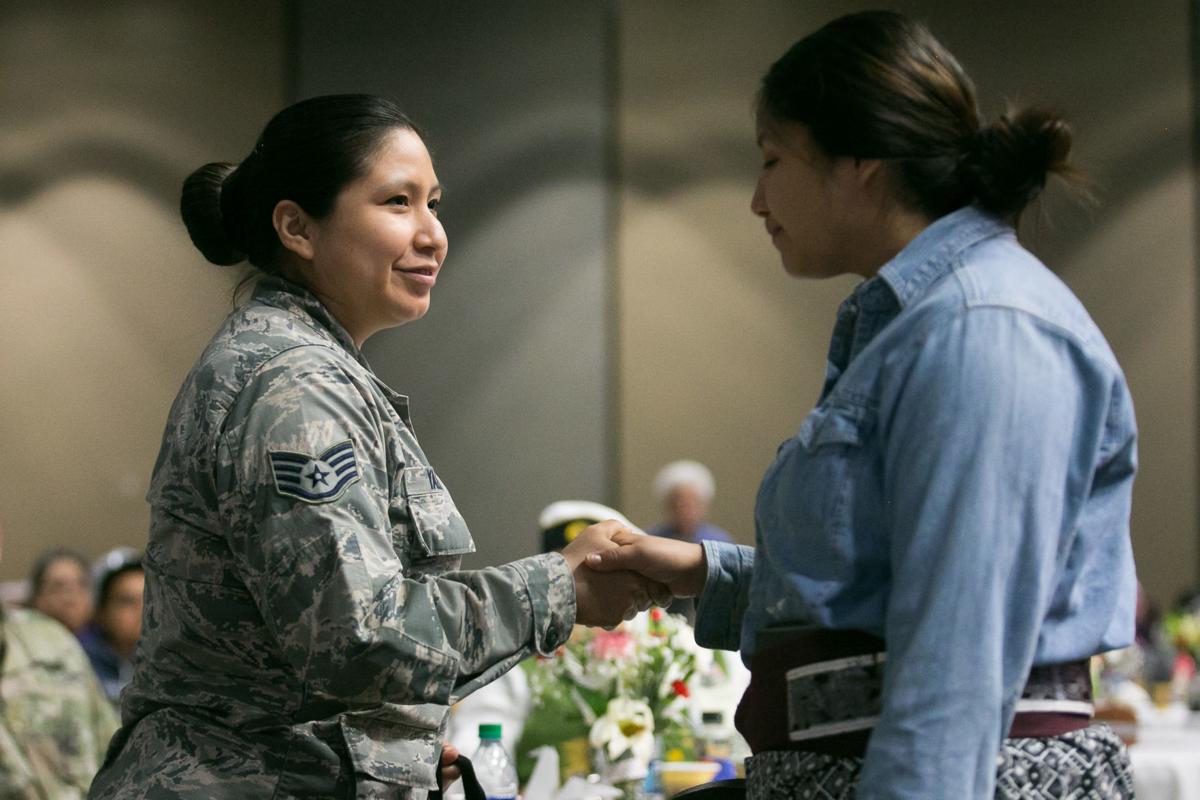 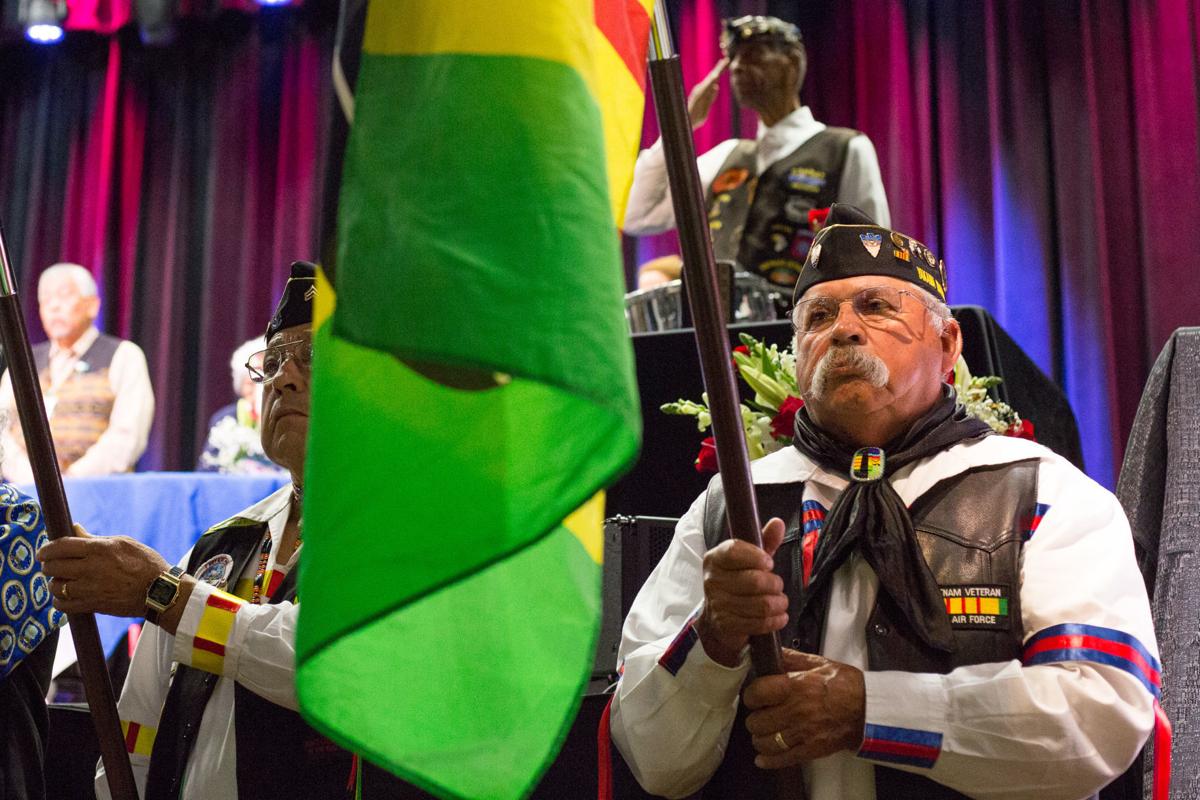 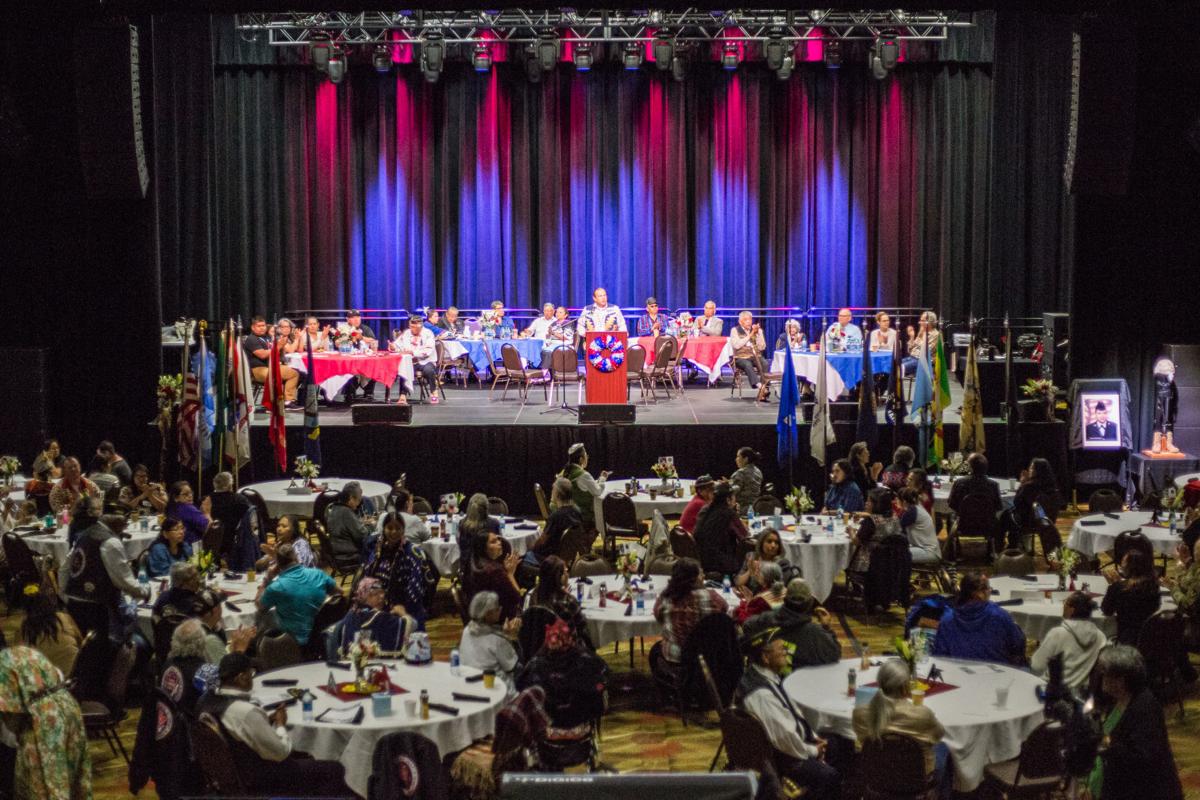 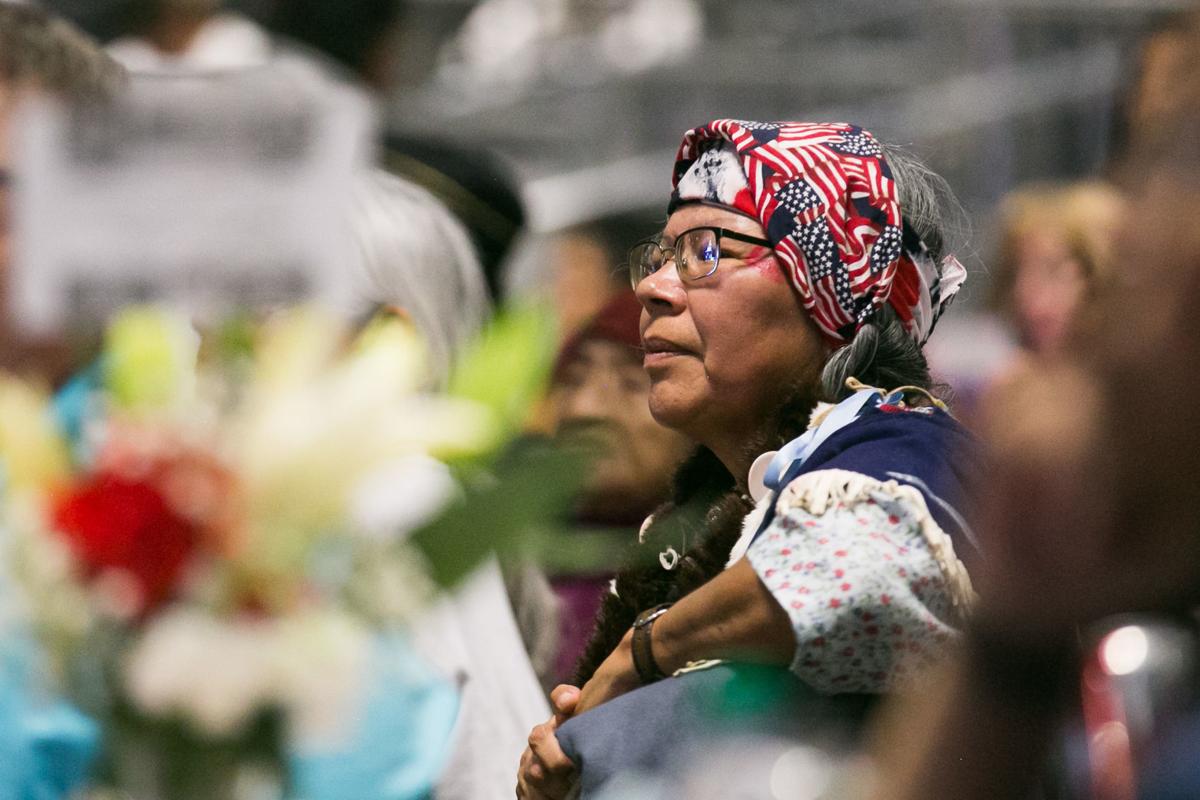 Virginia Beavert, 97, was honored Saturday for her work on languages spoken by Native people in the Columbia River system.

Virginia Beavert appreciated the help, but cheerfully insisted she could stand on her own behind the lectern on the Legends Casino events center stage.

“I’m 97 now,” she said, pausing for enthusiastic applause as the Yakama Nation honored women veterans in a special gathering Friday. “And I can still get up off my chair. I do tai chi. I try to keep active and keep myself going.

“I just want to say I’m happy to be here. Thank you for honoring me — the tribe and all of you people. Thank you.”

Beavert — whose Native name is Tuxámshish — was a particularly revered guest among many special guests. She served in the WACs, or Women’s Army Corps, during World War II. Her decision to serve was inspired by several male cousins who joined during the war.

She also is a teacher and author. Her most recent book, “The Gift of Knowledge — Ttnúwit Átawish Nch’inch’imamí,” came out in 2018. Many are familiar with her expertise and work with Ichiskíin, also known as Sahaptin, the language spoken by the Yakama people in Washington, Oregon and Idaho. Her stepfather, Alexander Saluskin, or Chief Wi-ya-wikt, citing his poor health, in the 1970s encouraged her to return to school to help him complete his life’s work, “The Sahaptin Practical Dictionary for Yakama,” according to a profile of her on the Central Washington University website.

For her and other Native women, military service not only offered many opportunities, it made sense. It was important.

“They used to ask me, why do you think Indians join the Army? They’re not supposed to go to war anymore,” Beavert said. “I said it was to protect my homeland. My own language. My own family. And that’s the way I felt.”

The event acknowledging the achievements of female veterans began with members of the Yakama Warriors Association leading a procession of veterans into the events center. Anthony Washines, who served in the Marine Corps, was master of ceremonies. Along with the presentation of colors, several speakers and special honors for female veterans, guests could check out informational booths and enjoyed a salmon luncheon.

Washines invited the crowd, estimated at about 200, to participate in a round dance all around the expansive floor, with singing and drumming by students from the Yakama Nation Tribal School. Shawn Scabbyrobe led the drums. “Join in the celebration,” Washines said. “Take it away, Tribal School!”

Before the event began, photos and names of Native women who served in the Marines, Army, Navy, Air Force, Coast Guard and Merchant Marines and as commissioned officers scrolled on two big screens framing the stage. Along with Beavert’s name and photo were those of Cecelia Jack, Michelle A. Hoptowit, Amber Rae Hill-Terry, Shirley Moses, Mary Diavolikis, Michelle Huber, Wynona “Noni” Woolf, Amber Rae Hill-Terry, Delphine Allen-Rose and many others.

Piestewa Peak in Arizona is named in her honor. “In the process, they removed a derogatory name for (Native) women and honored a hero,” said Davis Washines. He introduced Piestewa’s mother, Priscilla “Percy” Baca, and two children, Brandon Whiterock and Carla Piestewa, who sat among the special guests on the stage. They received a plaque from the Yakama Nation and other gifts.

After the presentation, Piestewa’s son spoke.

“It’s just truly greatly humbling to be here. Just the environment and the energy here is just so amazing. Being welcomed to the Yakama Nation is just awesome,” Whiterock said. “I just want to thank all veterans, woman veterans, everyone here for serving.”

Throughout the two hours before the noon lunch, Steve Ganuelas sat in the risers with his wife of 59 years, Linnea. Though a member of the Yakama Warriors Association, the Korean War veteran wasn’t wearing his Warriors jacket or hat, he noted. Several members and others stopped to shake his hand.

Ganuelas hummed along as Loren Corpuz performed the Marine Corps song on his trumpet, accompanied by John Smith on snare drum. With the end of the song came the Corps battle cry.

Yakama linguist honored for a lifetime of reviving Native languages

BEND, Ore. — A Yakama linguist has been honored for her efforts to preserve and breathe new …