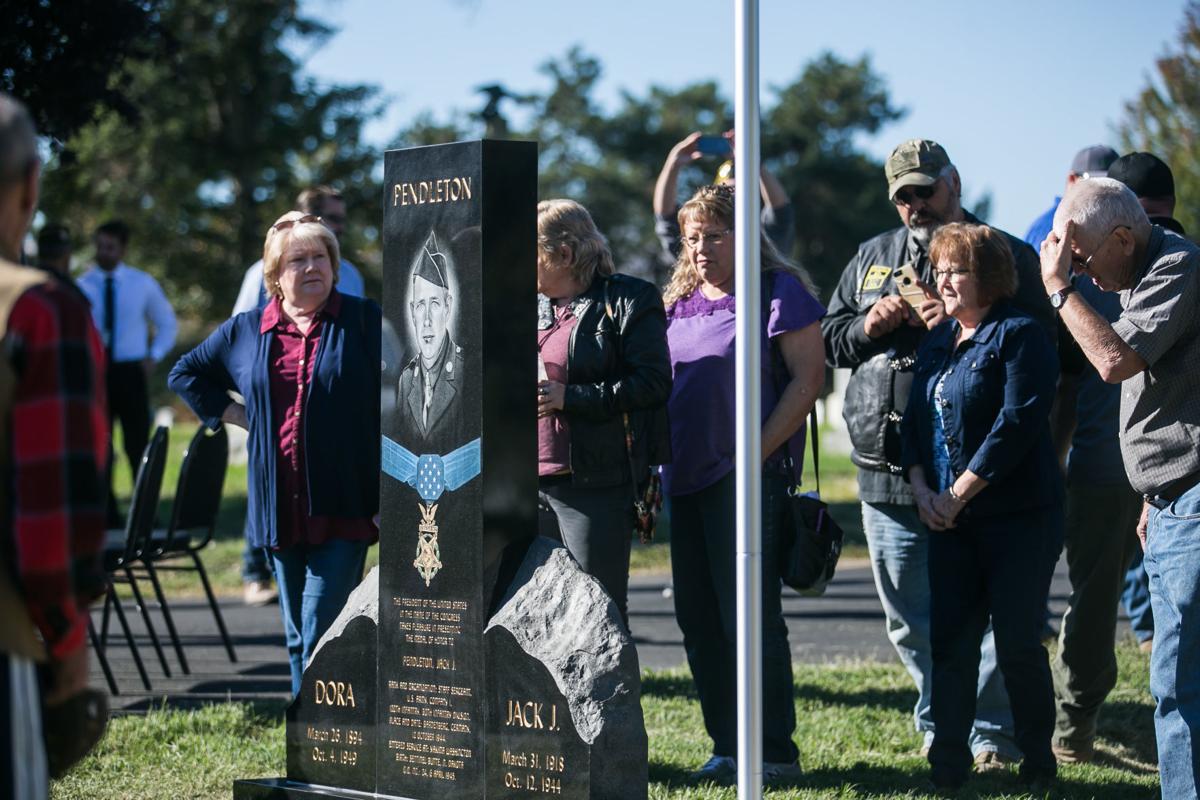 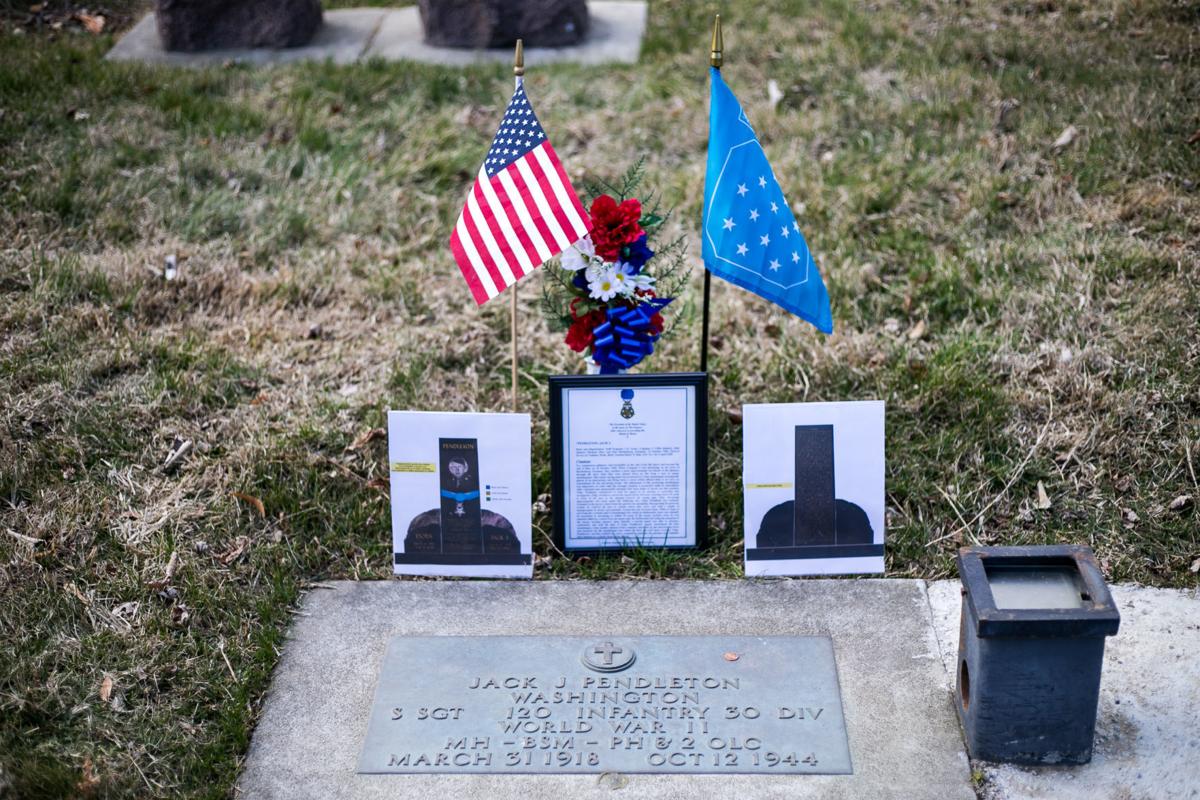 In this file photo from Sunday, March 25, 2018, members of the VFW hold a Medal of Honor ceremony for Staff Sgt. Pendleton at Tahoma Cemetery in Yakima, Wash. 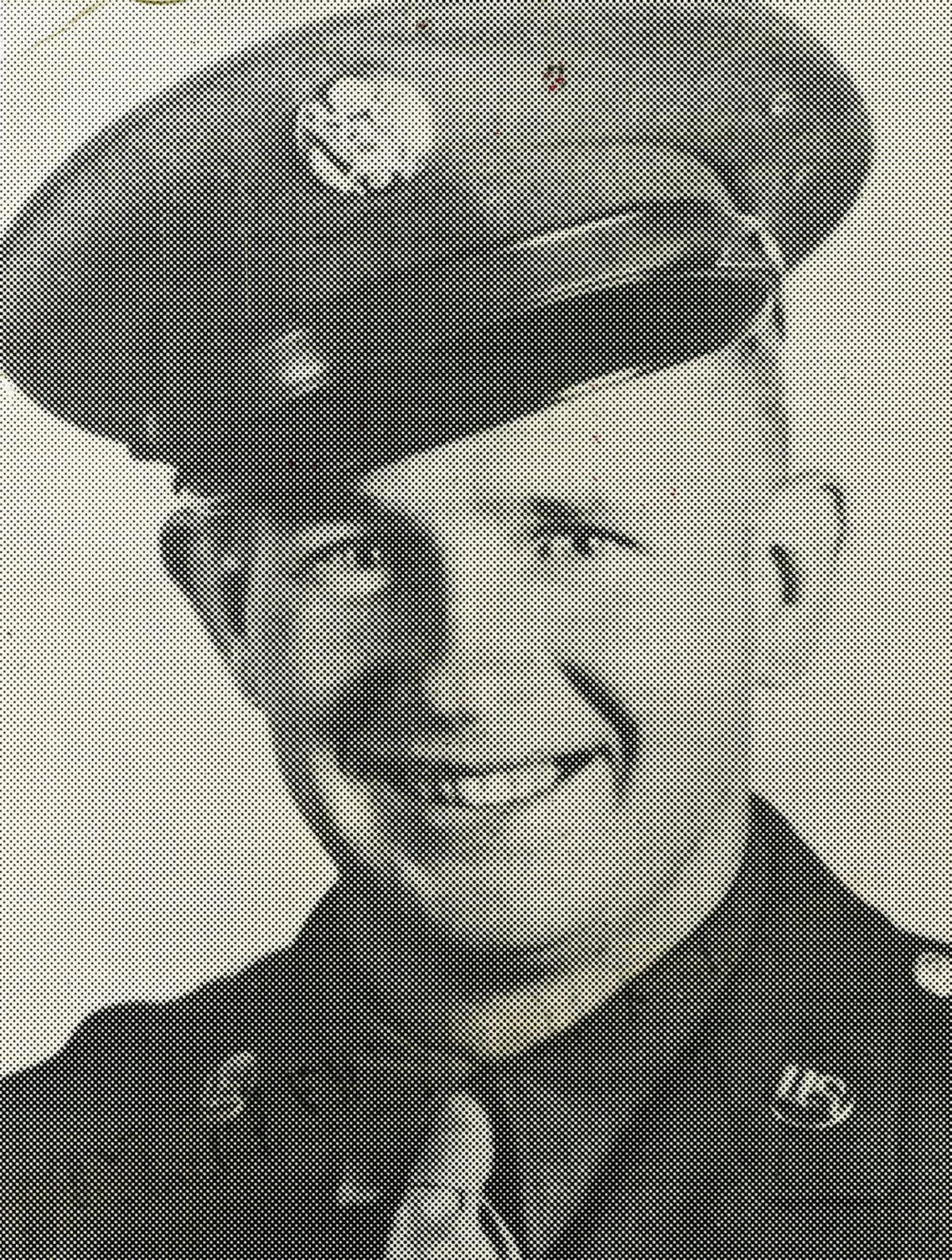 In this file photo from Sunday, March 25, 2018, members of the VFW hold a Medal of Honor ceremony for Staff Sgt. Pendleton at Tahoma Cemetery in Yakima, Wash.

It’s been 75 years since Staff Sgt. Jack Pendleton sacrificed himself for the men in his infantry squad when they were pinned down by a German machine gun nest.

Tim Gatton, commander of Veterans of Foreign Wars Post 379, said the remarkable part of Pendleton’s story is his age.

“He was a 26-year-old kid. He was not a seasoned warrior,” Gatton said. “That he was going to go down that street, knowing that he was not going to come back, so these other guys could live is the most amazing decision that people could make.”

Pendleton is Yakima’s only Medal of Honor recipient, and he’s been recognized by having a building, a ship and a Yakima street named in his honor. And recently, his grave marker at Tahoma Cemetery was upgraded to a black, polished granite monument that includes his Medal of Honor citation that tells the story of how he died Oct. 12, 1944.

“It never fails to make the hair on the back of my neck stand up, and a tear form,” Gatton said.

Pendleton was born in Sentinel Butte, N.D., in 1918, and moved with his family to Yakima in 1928. His father, Grover, died on Christmas Day 1931, and Pendleton dropped out of

school to support his family, working at a grocery store and picking fruit during harvests.

He also worked at a sawmill in California before enlisting in the Army on July 7, 1942. When he joined up, Pendleton took his leave of his hometown at the Yakima Train Depot.

By the time his 30th Division shipped out for Europe in 1944, Pendleton was a staff sergeant.

In the fall of 1944, American troops were moving to take the Ruhr Valley, Germany’s industrial center. But they first had to clear the city of Aachen and its suburbs, where the Germans were determined to stop the Allied advance at all costs.

On Oct. 12, Pendleton was leading his company into Bardenberg, 7½ miles from the Belgian border. Their objective was to take out a fortified German building where machine guns were pinning down U.S. forces, but it was guarded by a machine gunner who had turned the street approaching the building into a killing field.

Pendleton volunteered to lead his squad down the street to take out the machine gun. With bullets whizzing overhead, the squad crawled 130 yards with little cover when Pendleton was hit in the leg.

Gatton said a normal person’s reaction in that situation would have been to get out of there and save his own life. But Pendleton chose a different course of action.

According to his citation, Pendleton ordered his men to stay back, while he continued alone toward the gunner’s position, armed with hand grenades.

He got within 30 feet of the nest when he was fatally wounded by a burst of machine-gun fire. By drawing the gunner’s attention to himself, Pendleton allowed his squad and other soldiers to advance unnoticed to take the gunner, while other soldiers knocked out the gun emplacements in the building.

“I served in the military for 21 years, was on active duty, and thank God I was never in a situation like that,” Gatton said. “But at the same time, I wonder what decision I would make in that situation.”

Pendleton’s mother, Dora, was presented with her son’s medal on March 15, 1945, and three years later she would receive the first Gold Star Button issued in Washington.

In addition to the Medal of Honor, Pendleton also received the Bronze Star and the Purple Heart with two oak leaf clusters. He was initially buried in the Henri Chappelle Cemetery in Belgium, but in October 1947 his remains were returned to the United States, arriving at the same train depot from which he departed Yakima.

Pendleton’s courage was honored by the Army, which named a transport ship after him in 1948. It was on that ship that beat poet Allen Ginsberg, then a crewmember, published a 22-page book of poems on the ship’s mimeograph.

Pendleton Avenue on Joint Base Lewis-McChord was also named in Pendleton’s honor, as was a building at the Yakima Training Center that has since been torn down.

In 2013, the city renamed a portion of East A Street to Staff Sgt. Pendleton Way MOH (Medal of Honor).

At Tahoma Cemetery, the VFW initially installed a solar-powered lamp to serve as an “eternal flame” to illuminate Pendleton’s grave marker.

Last year, a 6-foot granite marker was unveiled at Pendleton’s grave. Army Command Sgt. Maj. Ramon Dang led the campaign to upgrade Pendleton’s marker with one that stands out in the cemetery. The marker contains Pendleton’s likeness, as well as a rendition of the Army Medal of Honor with its blue ribbon, along with the text of Pendleton’s citation.

“The new marker is long overdue,” Gatton said. “You can see it from anywhere in the cemetery.”

South Cle Elum resident Douglas Munro has the distinction of being the first — and only — Coast Guardsman to receive the Medal of Honor.

Born Oct. 11, 1919, in British Columbia, Munro enlisted in the Coast Guard in 1939 after attending Central Washington College of Education in Ellensburg for a year.

By September 1942, Munro was a signalman first class and commanding a squadron of 10 Higgins landing craft during the Guadalcanal campaign.

On Sept. 26, 1942, Munro’s boats landed Marines on Point Cruz. When they returned to their rendezvous point, the Coast Guardsmen were told that the Marines were in trouble and needed to be evacuated immediately. Munro volunteered to lead the boats back.

Under withering fire, the boats hit the beach and began taking on Marines. But the Marines who were providing cover for their comrades were pinned down by the Japanese forces.

Munro brought his boat in between the Marines and the Japanese and used its machine gun to provide cover for the rearguard to evacuate. As he did so, Munro was shot in the head.

According to one of his shipmates, Munro’s last words were “Did they get off?”

The Coast Guard’s building in Washington, D.C., is named for Munro, as is a Coast Guard cutter, the second to bear his name.