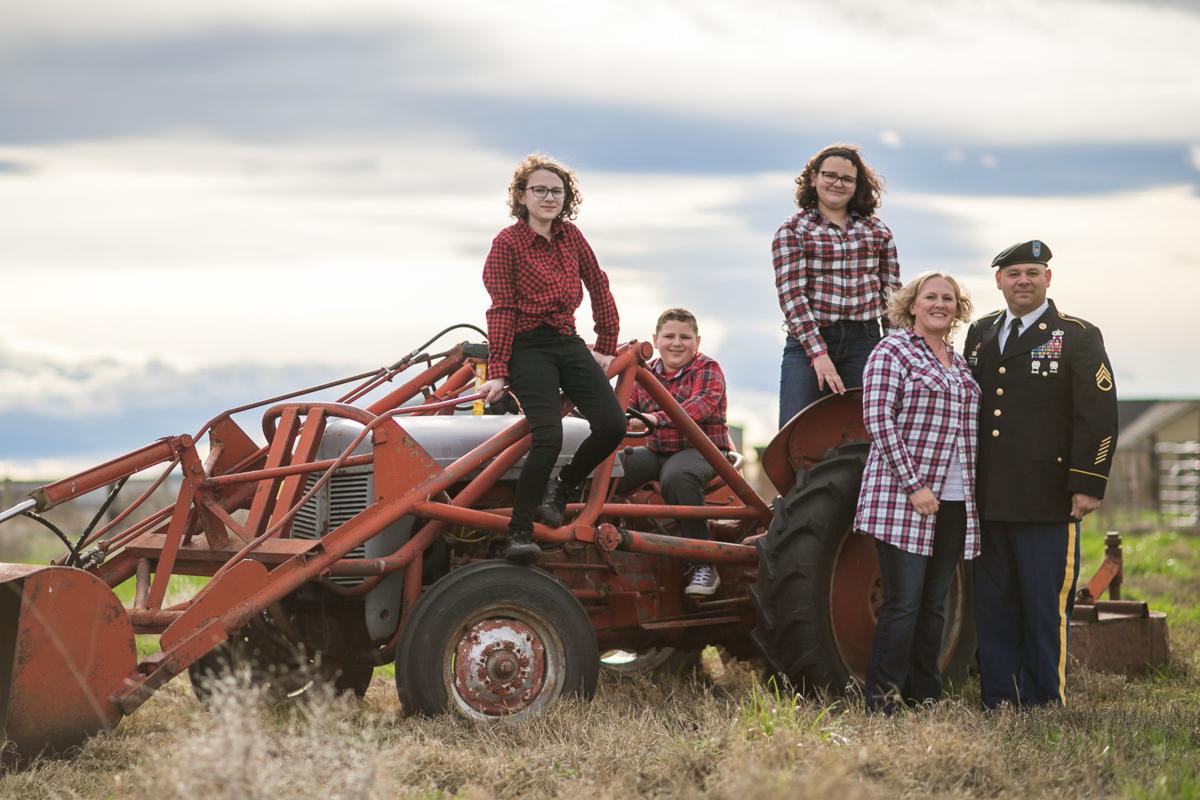 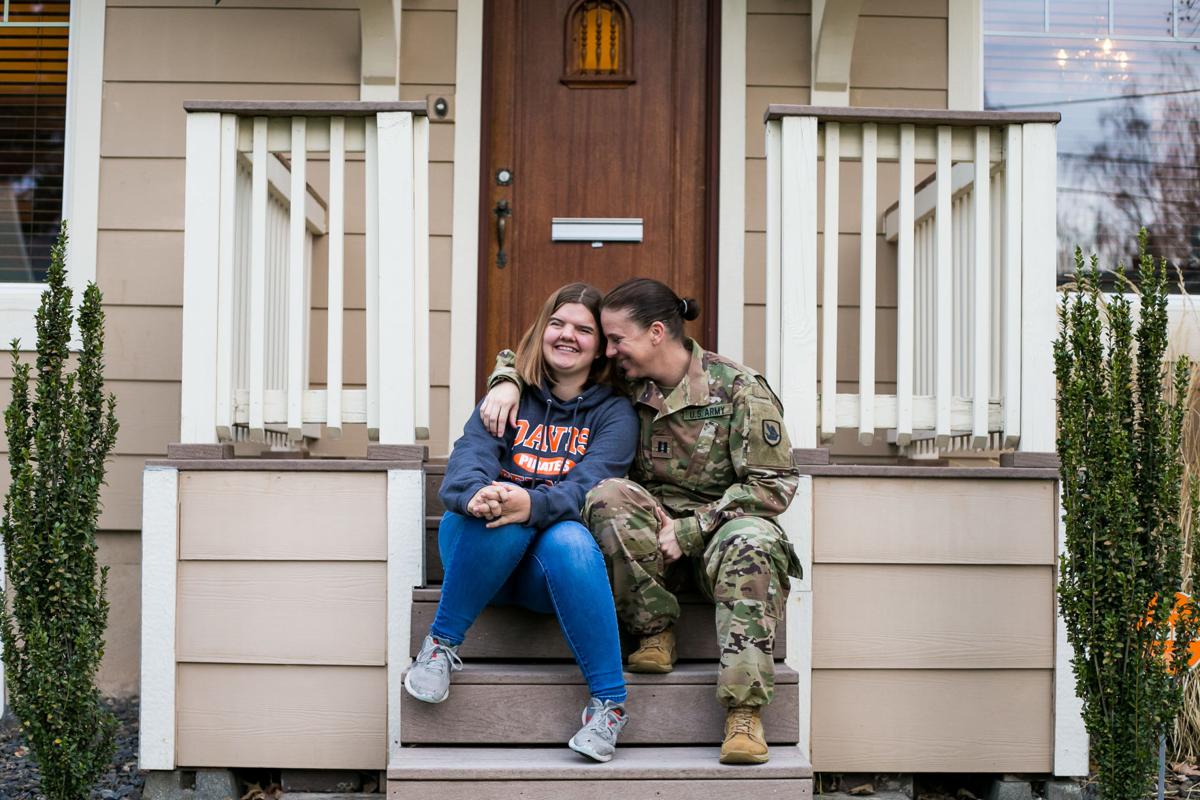 As superintendent of the Mabton School District, Joey Castilleja wears dress slacks, a jacket and tie most days. He occasionally dons his Army National Guard uniform, which prompts talk and second looks.

“The first time my students see it, it really throws them off,” he said. Some of the little kids comment. “Oh, you’re an Army man,” they say.

Big kids are more introspective. “It gets them thinking,” Castilleja added.

Castilleja, who grew up in Zillah, began considering the military as a teen. He thought he might want to be an officer but also planned to attend college and become a music teacher. A recruiter mentioned the many jobs possible as part of National Guard service.

“In the National Guard, you can be just about anything. I found that there was a band. ... So then (the recruiter) set up for me to go to Tacoma for an audition. I sat in on a drill weekend. I was offered a spot, so I enlisted. That was my senior year that I enlisted.”

On Tuesday, Castilleja celebrated 20 years in the National Guard. In the two decades since April 9, 1999, he has worked as a teacher and administrator, married and became a father of three, earned a doctorate and has served in the Air National Guard and the Army National Guard. Castilleja is a member of the 133d Army Band stationed out of Camp Murray in Tacoma and its popular rock contingent, Full Metal Racket.

“Your local people are doing it. You have everything from young students to teachers, to anyone you can think of, out in the civilian world,” Castilleja said. “One weekend a month, they look like a soldier.”

Occasionally they even take the stage as Castilleja does with his full Army band and the smaller Full Metal Racket, which includes several musicians and a few crew members. Full Metal Racket performs at schools, public events and has even entertained Seahawks fans before a game.

Freddie Garza of Yakima, an Air Force reservist who graduated from Davis High School, is known for singing at Mariners and Seahawks games. He performed at his first NBA Finals in June, in uniform as always.

For many members of the National Guard and Reserves, military service is much more low-key. But most will likely agree it’s been life-changing for the better.

Shawnta DiFalco, director of special education and assessment for the Grandview School District, was recently promoted in the Washington Army National Guard. She had her promotion ceremony at the school board meeting last month and board president Dale Burgeson pinned on her new insignia.

She appreciates the board and her boss, Superintendent Henry Strom, and her co-workers, family and friends who support her service in the National Guard. That support is crucial, said DiFalco, whose unit is the 144th Army Digital Liaison Detachment based in Spokane.

“I just think that it’s really important to me that the community knows” that those in the Guard and Reserves can’t do what they do without the compassion of their civilian employers, DiFalco said. “I missed over two months of work last year because of training requirements. You have to have a strong relationship with your employer.”

Castilleja is equally appreciative of his employers and fellow employees throughout his military career.

“I give a lot of credit to my co-workers. My unit is in Tacoma. If the weather is bad, I have to leave early; they have to pick up that slack,” Castilleja said. “I’ve always been very fortunate. We’re also in a state that’s very supportive of that service.”

Most important, though, is the support of family.

“I always want to acknowledge my wife and my kids, even my parents and siblings,” he said. “They all serve with us as well, even though they don’t. The whole family serves.”

As the mother of two daughters, DiFalco knows that well.

“I’ve always had a pretty amazing extended family. My neighbors, when I leave for short missions ... are here to take care of my house. My extended family supports the girls,” she said, and she especially appreciates her former husband, who lives nearby.

“I wouldn’t be able to do all this if he wasn’t a good dad,” she said.

DiFalco joined the Army Reserves just out of high school in 1996 “because I was actually a wayward youth and a runaway at the age of 15. I come from a small community. It was a way to pay for an education and a way to learn some discipline,” she said.

“I had a lot of teachers and people in the community who thought it would be a good idea, and it was.”

She spent eight years in the Army Reserves, attended college, married and had two girls. DiFalco left the Reserves and stayed home with her girls for several years, until they went to school, then got back into the military.

“I just missed it,” she added of her service. This time, she chose the Washington State National Guard because it has a domestic mission.

“I’ve always been really interested in emergency response,” said DiFalco, who has fought fires as a National Guardsman and volunteers for the Grandview Fire Department as an EMT. Before that, she was with Yakima County Fire District 5.

“We do a lot of helpful things and a lot of service here in the state. We help with floods, community service events,” she said. “It’s not just about the seriousness of war. There’s a lot of things we do in the domestic side.”

Her service is also important because of her daughters, a senior and a freshman at Davis High School.

“Growing up, I didn’t have strong female role models,” DiFalco said. “I want my daughters to see that women can have strength. They can follow their dreams but still be moms. I think a lot of times men get to do all those things and women are expected to raise the children.

“I’ve always wanted to be a role model for my girls and my students. Being in the military always connected me to young people.”

She will celebrate 10 years in the Washington Army National Guard this summer.

“I think I’ll stay in as long as I’m an asset. I love my country and I think that you have to participate,” said DiFalco, who is 41. “This is the way I choose to participate.”

It’s not about the paycheck, Castilleja said.

“It’s my duty and it’s something I’m highly trained to do. It’s something to give back,” he said. “It’s going to be a sad day when I don’t get to put the uniform on.”

What are the Reserves and National Guard?

The Reserve Components of the Armed Forces are the U.S. Army Reserve, Naval Reserve, Air Force Reserve, Marine Corps Reserve and the Coast Guard Reserve. Reserves are federal. The Army and Air National Guards, which are organized militias, serve their states. They can also be called to federal service.

All Reserve and Guard service members are assigned to one of three Reserve Component categories, with most in the Selected Reserve. A much smaller group comprises the Inactive National Guard and Individual Ready Reserve categories; they don’t participate in regular training or active-duty drills, notes military information from the Pew Research Center.

According to a U.S. Department of Defense publication, “2017 Demographics: Profile of the Military Community,” the overall number of members in the Selected Reserve was lower in 2017 compared to 2010. The Selected Reserve force was 4.9% smaller that year than it was in 2010, when there were 857,261 Selected Reserve members.

This story is part of a yearlong series about veterans in the Yakima Valley. On the 11th of each month, the Yakima Herald-Republic will talk to area veterans about their experiences and explore connections in the community. If you have a story idea, email news@yakimaherald.com with “Valley Vets” in the subject line. To read these and other stories of those who’ve served, and see the series’ videos, visit www.yakimaherald.com/valleyvets.

For the second straight year, Central Washington University in Ellensburg is among 30 national finalists for the Secretary of Defense Employer Freedom Award, which is presented to up to 15 public and private employers annually.

The award program is administered by the Employer Support of the Guard and Reserve, a volunteer group that encourages employers to support those serving in the National Guard and Reserves, a news release noted.

Nominees must have documented support of Guard and Reserve employees through their leadership and practices, the release noted. That includes adopting personnel policies that make it easier for employees to participate in the National Guard and Reserve.

The 15 employers selected to receive the 2019 Secretary of Defense Employer Support Freedom Award will be announced by mid-June.