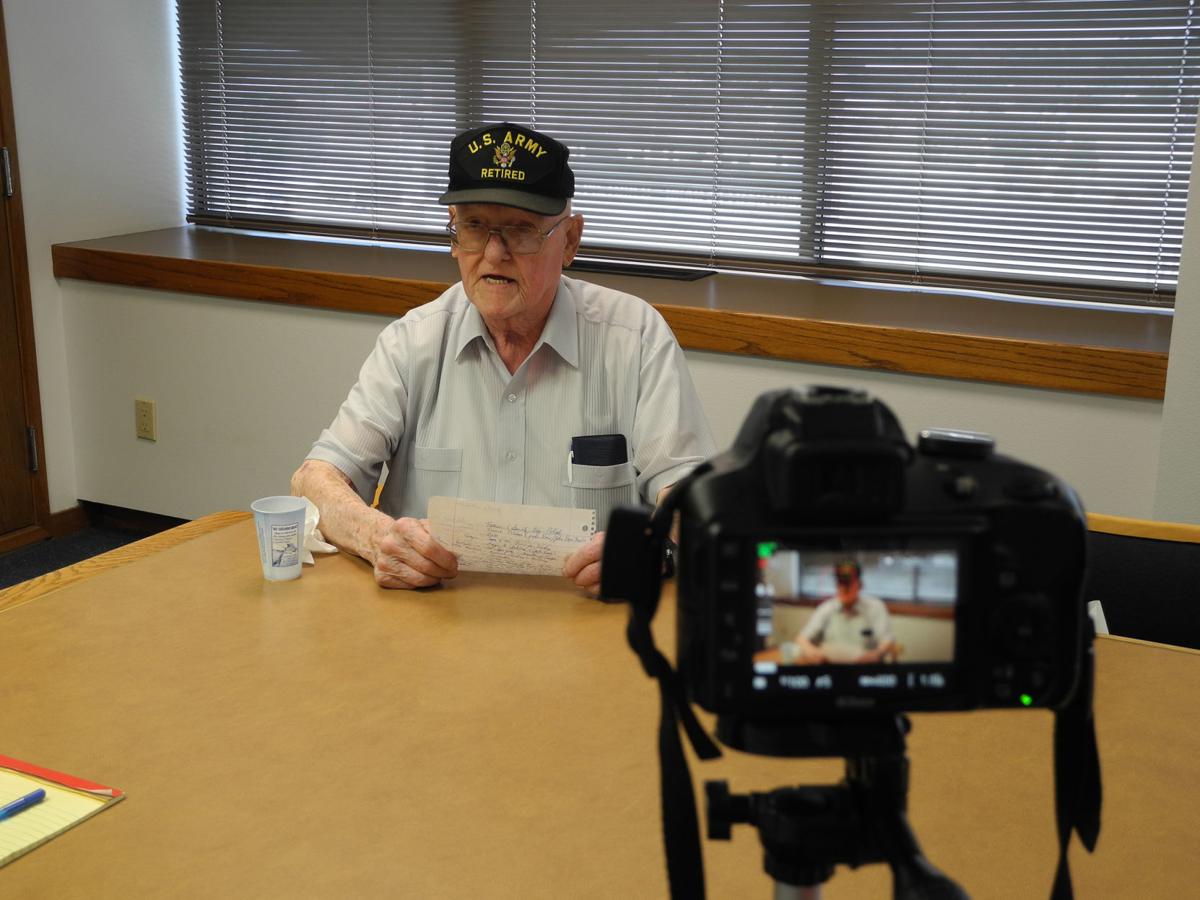 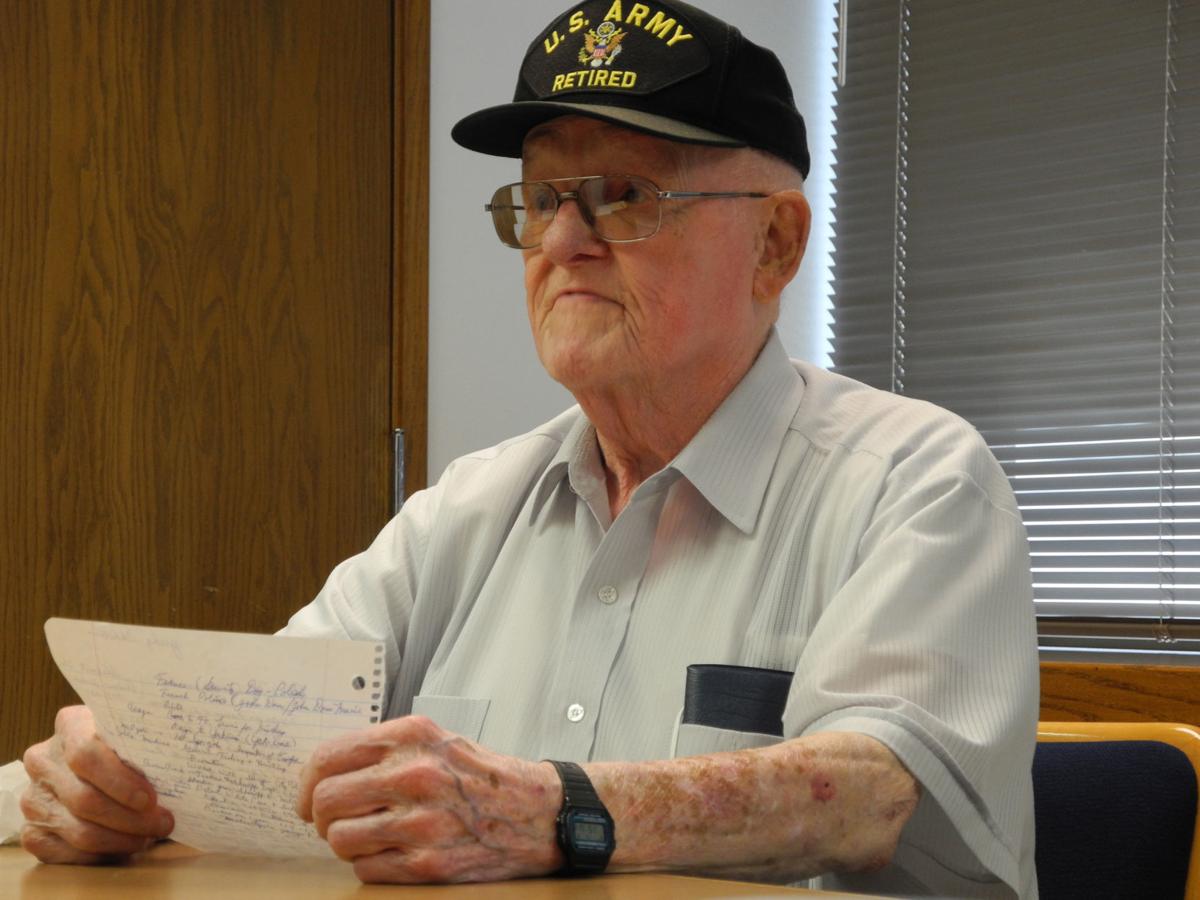 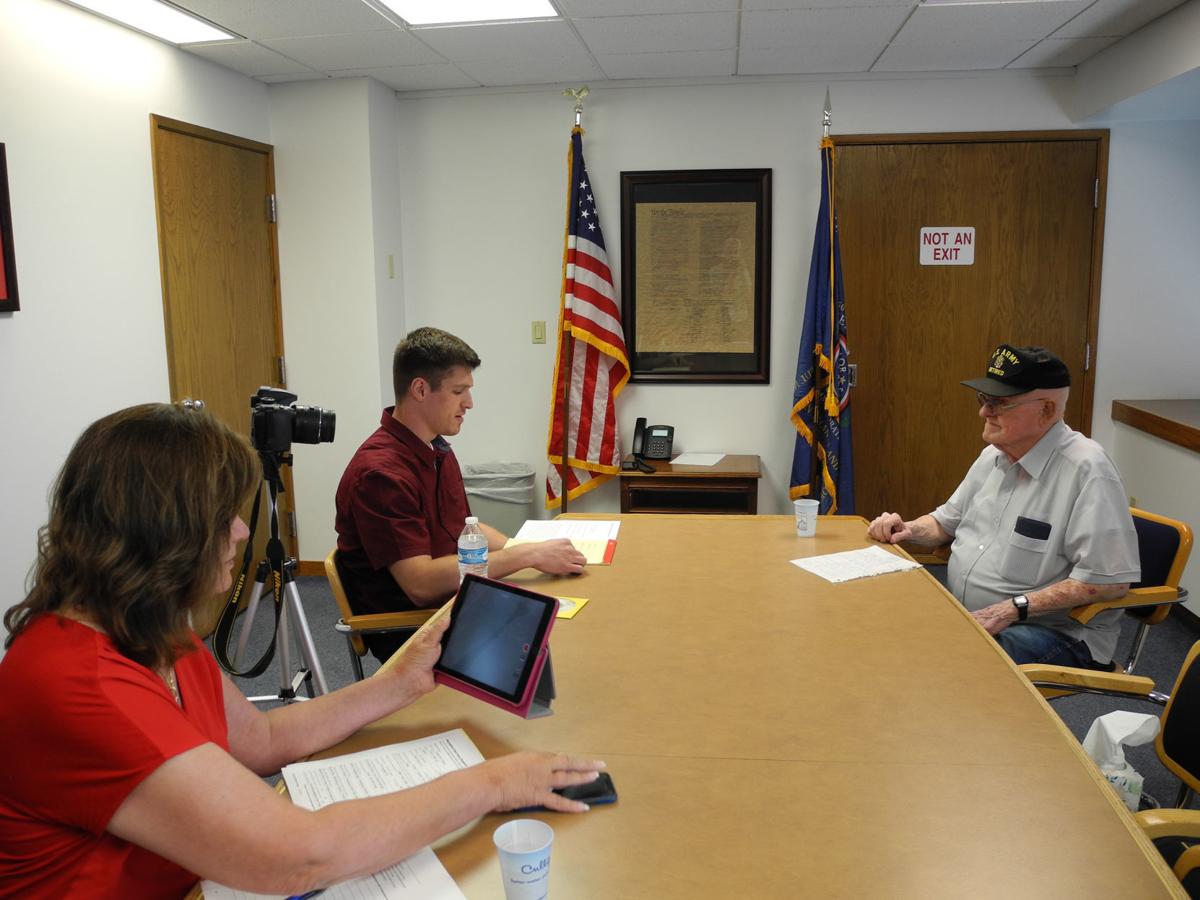 Julie Thaxton, left, and Derek Flint listen to veteran Don Thaxton tell stories of his service to be submitted to the U.S. Congressional Library’s Veterans History Project on Thursday, Aug. 8, 2019. 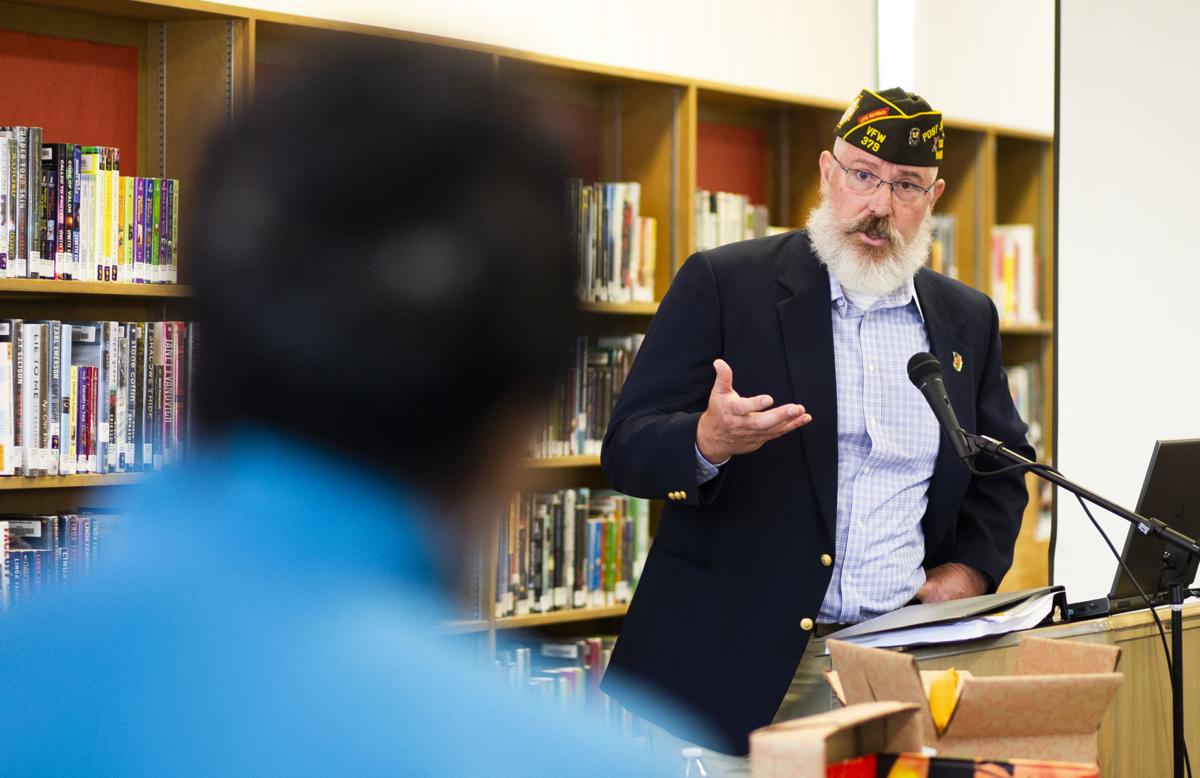 Michael Brumback thanks Librarian of Congress Carla Hayden on July 31 for coming to Yakima before sharing stories about his time in the military at Yakima Central Library. Brumback is one of the Yakima Valley veterans U.S. Rep. Dan Newhouse’s office interviewed to have their stories added to the U.S. Congressional Library’s Veterans History Project. 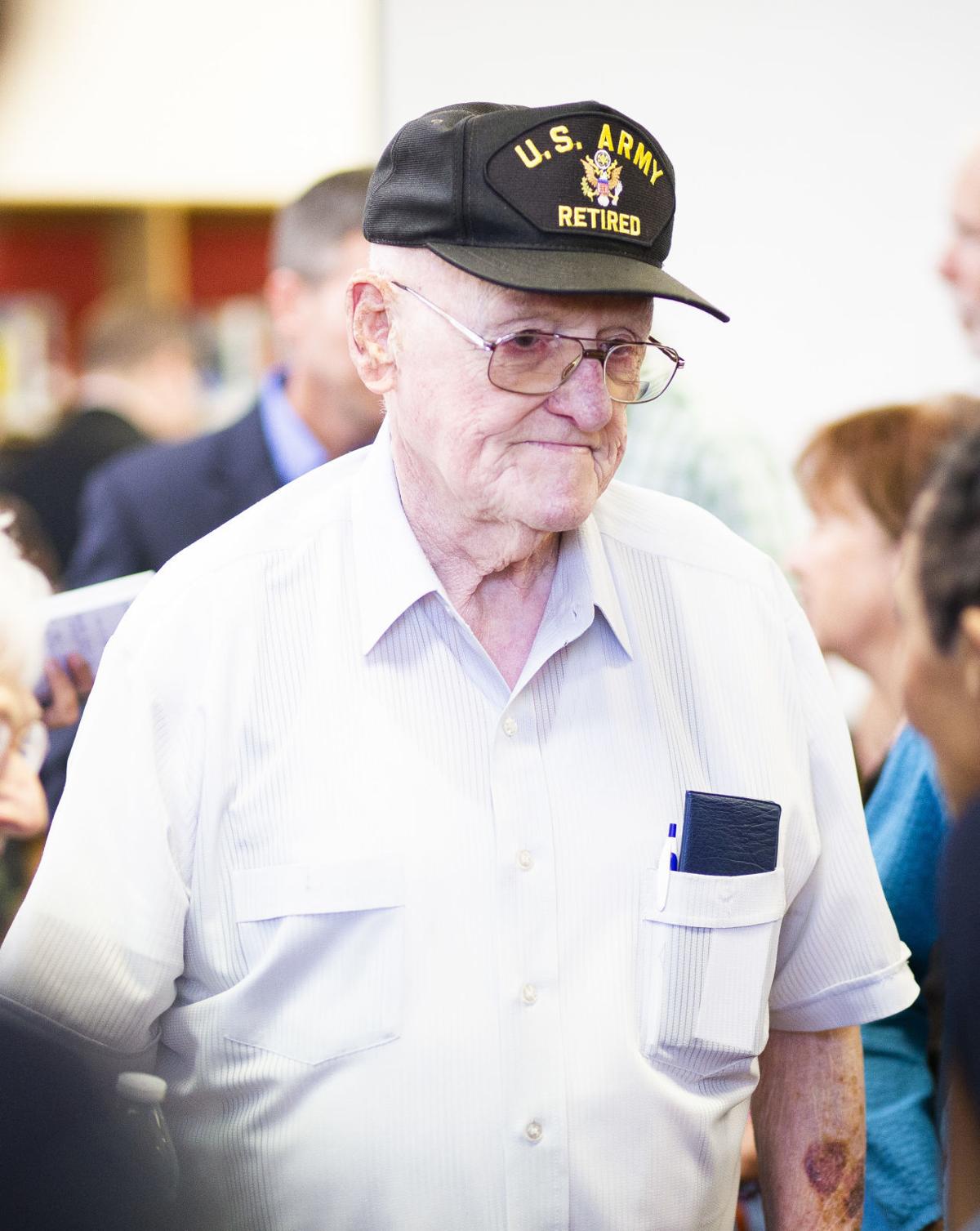 U.S. Army veteran Don Thaxton is pictured at the Yakima Central Library after telling his story for to the U.S. Congressional Library’s Veterans History Project on Wednesday, July 31, 2019.

Julie Thaxton, left, and Derek Flint listen to veteran Don Thaxton tell stories of his service to be submitted to the U.S. Congressional Library’s Veterans History Project on Thursday, Aug. 8, 2019.

Michael Brumback thanks Librarian of Congress Carla Hayden on July 31 for coming to Yakima before sharing stories about his time in the military at Yakima Central Library. Brumback is one of the Yakima Valley veterans U.S. Rep. Dan Newhouse’s office interviewed to have their stories added to the U.S. Congressional Library’s Veterans History Project.

U.S. Army veteran Don Thaxton is pictured at the Yakima Central Library after telling his story for to the U.S. Congressional Library’s Veterans History Project on Wednesday, July 31, 2019.

Donald Thaxton, 88, spelled his last name and gave his branch of service: retired, U.S. Army, as he pointed to his hat. A video camera recorded what he said in a downtown Yakima conference room.

“Well, I’ll give you a little rundown of my military career, even part of my civilian career,” he started.

He then talked about his 24 years of military service, starting when he enlisted with his parents’ signature of approval at age 17, through his wedding day three days before being shipped to the Korean War, and ending in Yakima, where he and his family settled.

Across from him sat Derek Flint, a staff member of U.S. Rep. Dan Newhouse of Sunnyside, who arranged the meeting and prepared the video camera. To Flint’s right, Julie Schilling marked different times throughout the recording and notes from her friend’s story on a piece of paper to prepare a time stamp for the recording.

Thaxton’s story was being cataloged as part of the U.S. Library of Congress’ Veterans History Project. The project, dedicated to preserving the stories of veterans dating back to World War I, began in 2000. Last month, Newhouse’s staff helped organize the first collection of veteran stories from Central Washington to be submitted to the library, including Thaxton’s.

Interviews with veterans follow an outline, starting with biographical details, then early days in the military — “were you drafted, or did you enlist?” — wartime service, end of service and reflections.

“The goal is to archive as many experiences as we can from the people who actually lived through these experiences, through this period of time,” Newhouse said at a gathering at Yakima Central Library last month, where Librarian of Congress Carla Hayden accepted the 22 submissions.

Each day, roughly 348 World War II veterans die nationwide, according to the National WWII Museum. And many times, their stories die with them. The project aims to capture these histories.

During the presentation, Thaxton was among three veterans to speak, sharing some of his wartime memories. He had already been formally interviewed as part of the initial group of 22 Central Washington veterans, but Hayden asked to record more of his memories, Flint said. So he returned to Newhouse’s conference room, where his stories spilled out across years of memory and hours of recording.

The stories of Thaxton and his fellow local veterans will soon be digitized as part of the library collection, joining accounts from 108,674 veterans across the U.S. in the online archive.

Verne Bakker served in the war in Vietnam when he was in his early 30s. Now 72, the veteran remembers hauling supplies, such as JP4 jet fuel used by helicopters, through hostile territories to remote landing zones as part of a transportation unit.

“We were a Yakima reserve unit that was activated as a whole company together. So we served in Vietnam from ‘68-’69,” he said. “Our biggest problem was occasional sniper fire and then a whole lot of land mines.”

Bakker reached out to Newhouse after learning about ceremonies the congressman conducts to commemorate returned veterans. He invited the congressman to the 50th anniversary of his unit’s return from Vietnam in July, he said. Afterward, Newhouse asked Bakker to participate in the Veterans History Project, and a staff member interviewed him as part of the initial collection.

“It brings a few things back to light. Sometimes it’s good to talk about it because we don’t talk about it much,” he said. “Just to have some questions asked, and you kind of start reliving a few old memories — and some not so good, and some are lifelong friendships that we developed.”

Bakker said the majority of his interview focused on the unit’s role in the conflict and some of the threats that the group faced at the time. He also shared the first time he was thanked for his service, some 15 years after he returned from Southeast Asia.

“That was a bit emotional for me, because that was the first time since I had returned from Vietnam 15 years ago at that time that somebody actually said ‘thank you,’” he said. “Of course, a lot of things have changed. I think the public is more supportive now of Vietnam veterans than they were when we came back in the late ‘60s, early ‘70s.”

Bakker believes younger generations lack a full understanding of what some veterans have faced. After he returned, he taught math in Yakima for 30 years, and would show his students slides about his tour once a year. Even young people who were initially disinterested often became glued to the screen and learned from his stories, he remembers.

“In many ways, they just don’t appreciate what they have,” he said. “It’s not their fault, it’s just that they don’t know. They don’t know what a lot of people have gone through to make us who we are (as a country).”

While Bakker said he wasn’t sure how many people would take interest in or access the Veterans History Project archives that he is now part of, he said collecting and preserving the stories might be a start to sharing these experiences more broadly with younger generations.

Grant Pickett is entering his senior year at West Valley High School and is in the process of applying to the U.S. Military Academy at West Point. This summer, he contributed to the archive process, interviewing three local veterans whose stories are now in the hands of the Librarian of Congress.

“I’m a firm believer that our veterans are some of the best Americans, and I really wanted to give back to them because they were so willing to sacrifice their lives for us,” he said. “So I thought being a part of this project, recording their stories and their service, would be a great way to give back to them.”

He said the project also is a chance to record history and contribute to the Library of Congress.

Before meeting with the veterans, Pickett and a group of volunteer interviewers underwent an hours-long training with Donna Sinclair, an adjunct professor of history at Washington State University, Vancouver, who was sent by the Library of Congress.

The training went over things like the process of filling out all the necessary paperwork and making sure audio and visual recorders were prepared.

“We also talked for a long time about being respectful with the veterans, with their story,” Pickett said. “Sometimes, it can be a touchy subject.”

Pickett said before beginning interviews, he told veterans that they could skip any questions or topics that made them uncomfortable. But all three of his subjects said there was nothing off limits, and at times they spoke through tears, he said.

Hearing their stories had an effect, he said. One veteran’s journey of leaving his family for training at a young age and maturing through the service encouraged him as he prepared for potential military training on the East Coast.

“I am definitely considering service, but hearing their stories and kind of the process that they went through, especially in training and then going into full-on service, was really helpful to me to have a better understanding of what that would look like when I go in,” he said. “So I would say that my decision about … (going) into services has definitely been a bit enlightened by their stories.”

One of the veterans Pickett interviewed was Yakima Valley attorney Michael Scott Brumback, who served in the military for more than 30 years under each president since Jimmy Carter.

Brumback said he felt there were more worthy local veterans to be interviewed for the project — there are plenty who share their stories with him at the local Veterans of Foreign Wars (VFW) post who served in World War II, for example.

“There are a lot of people who nobody pays attention to who have done a lot of hard work,” he said.

But the veteran agreed to participate, sharing stories from when he enlisted at age 17, to living in the barracks and eventually serving as a military judge advocate general, or JAG, prosecuting cases within the military. He considers his service an atypical experience for the library archives.

But Brumback said the collection as a whole was valuable because it brings to light some of the challenges that veterans have had to live through, and should only experience when Congress officially declares war, he said.

“It highlights that this is not a game. This is serious, and that shouldn’t happen unless it’s done by the will of the people,” he said.

The veteran said he appreciated the opportunity to speak with young people considering service through the project, such as Pickett. After the interview was over, he was introduced to a Tri-Cities student during the Yakima library event considering JAG service, he said. He was able to talk about his experience with her.

“That’s something I liked about (the Veterans History Project): the future,” he said.

This story has been updated to correct Schilling's last name and relation to Thaxton.