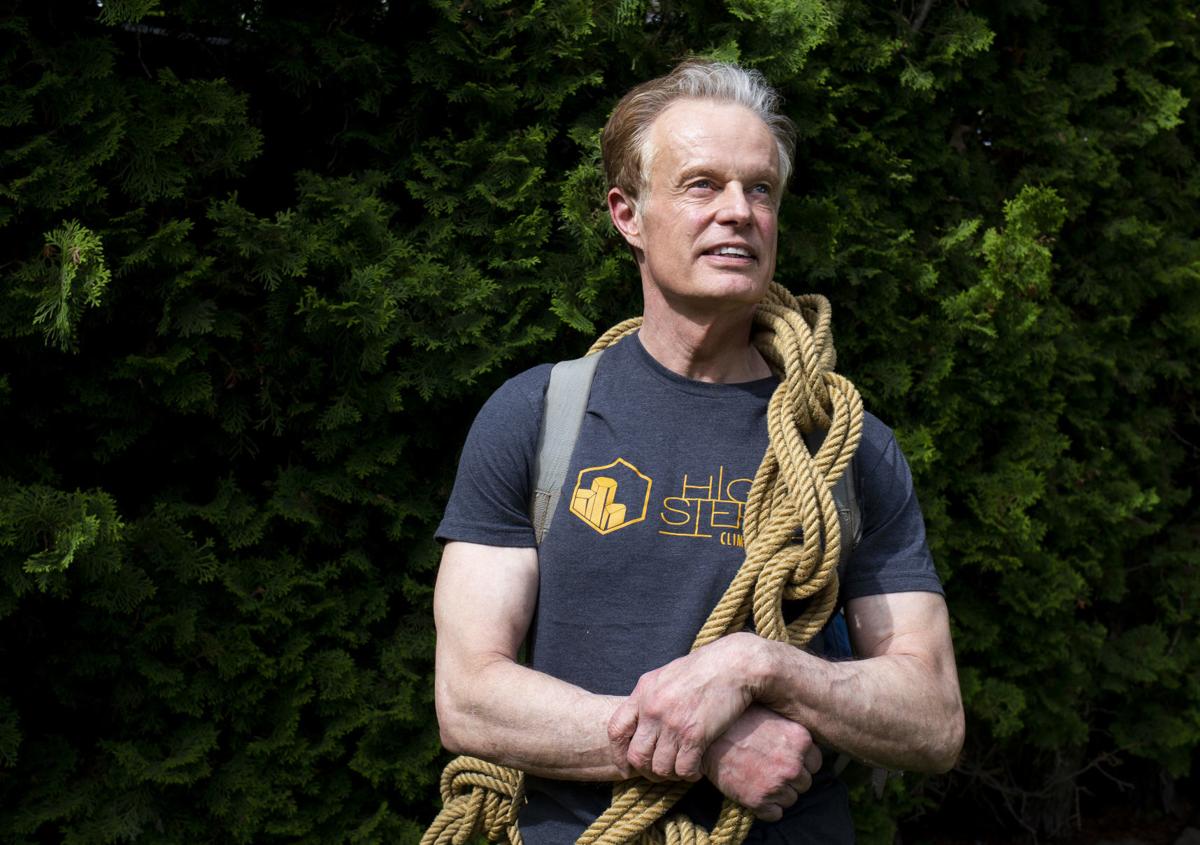 Rod Nelson poses for a portrait with the Goldline climbing rope and Millet canvas pack he used both times he climbed Mount St. Helens before it erupted on Saturday, May 16, 2020 in Yakima, Wash. 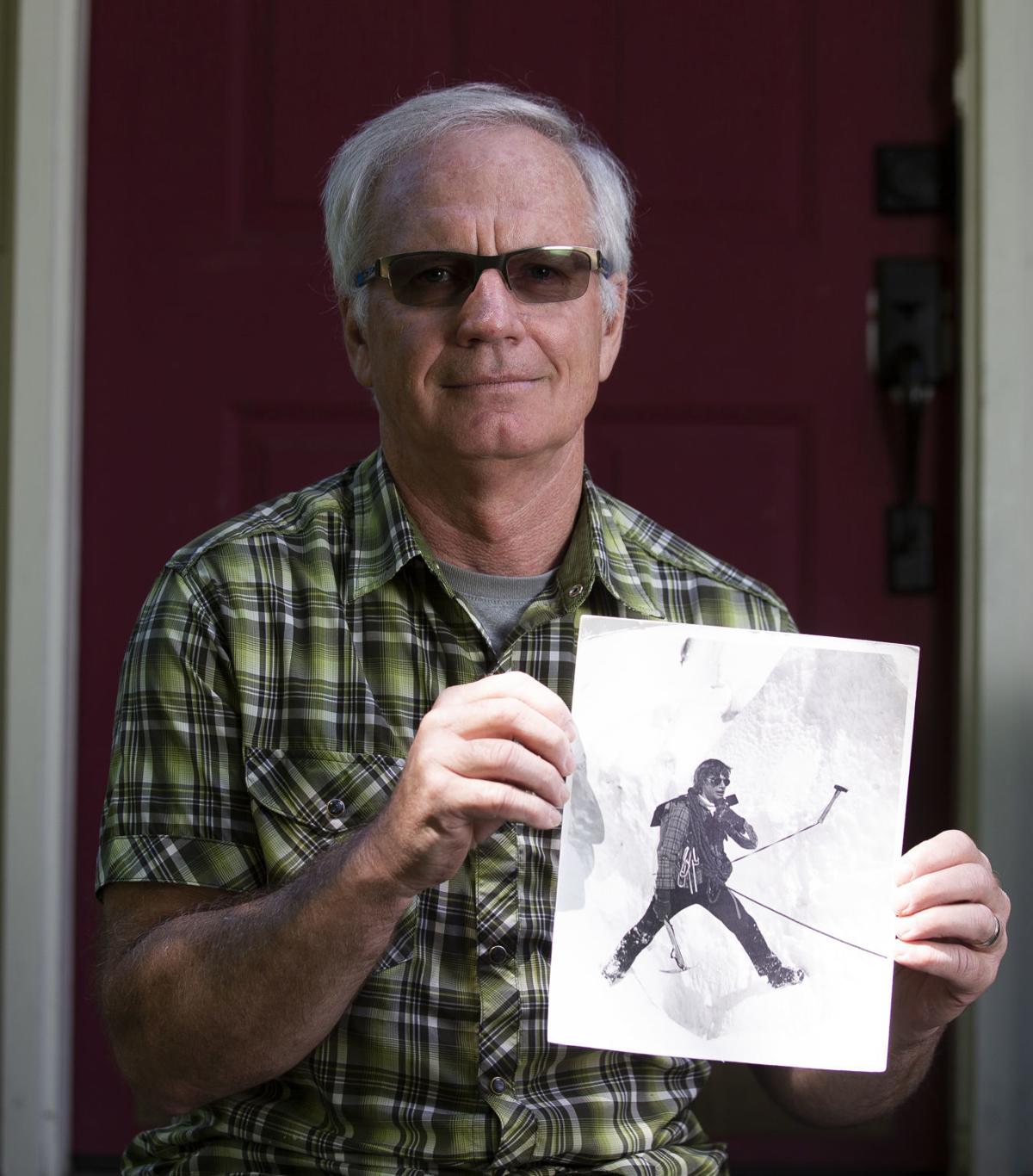 Matt Christensen poses for a portrait with a printed photo of himself climbing Mount St. Helens when he was 15 years old on Friday, May 15, 2020 in Yakima, Wash. Christensen said the photo was taken when a photographer dropped their camera case into a crevice in the Forsythe glacier and he climbed down to retrieve it. 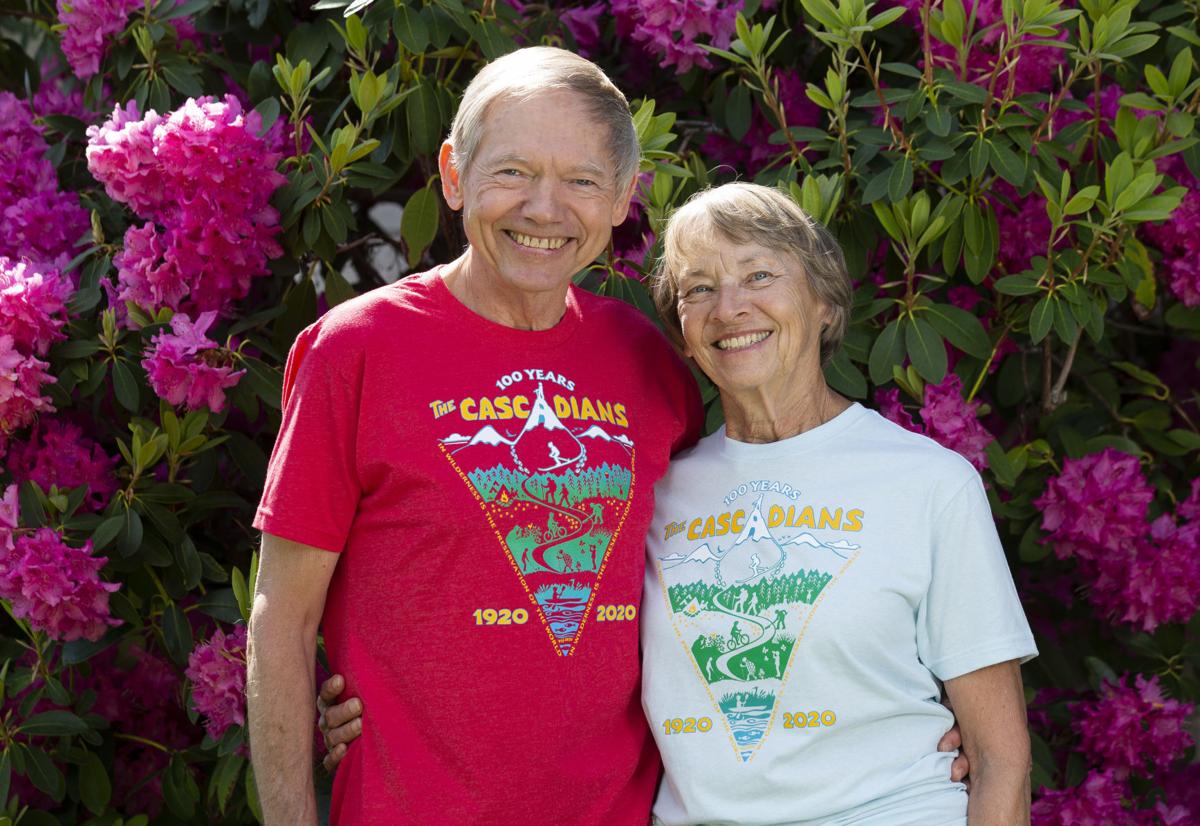 Jeff Hagen, left, and Joyce Hagen, right, pose for a portrait on Friday, May 15, 2020 in Yakima, Wash. The Hagen's climbed Mount St. Helens before it erupted. 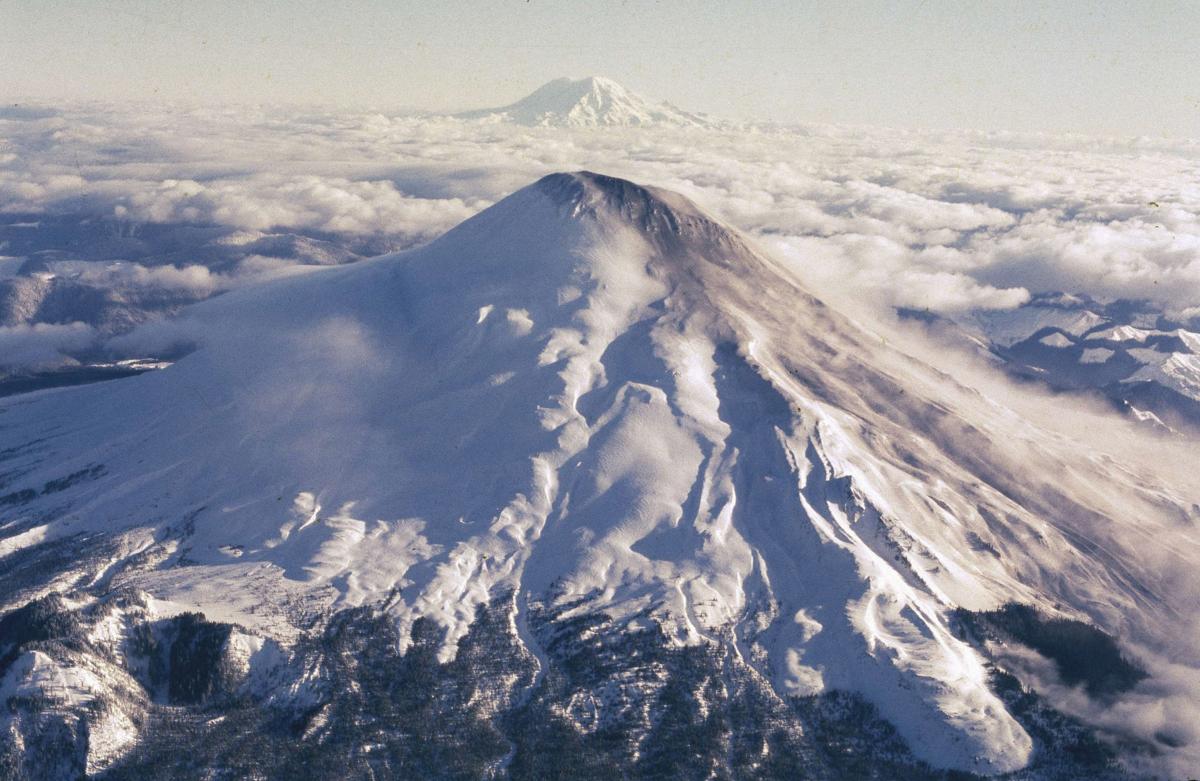 In this image provided by NASA, is an aerial view of Mount St. Helens, active volcano in Washington state, April 2, 1980. (AP Photo/NASA)

Rod Nelson poses for a portrait with the Goldline climbing rope and Millet canvas pack he used both times he climbed Mount St. Helens before it erupted on Saturday, May 16, 2020 in Yakima, Wash.

Matt Christensen poses for a portrait with a printed photo of himself climbing Mount St. Helens when he was 15 years old on Friday, May 15, 2020 in Yakima, Wash. Christensen said the photo was taken when a photographer dropped their camera case into a crevice in the Forsythe glacier and he climbed down to retrieve it.

Jeff Hagen, left, and Joyce Hagen, right, pose for a portrait on Friday, May 15, 2020 in Yakima, Wash. The Hagen's climbed Mount St. Helens before it erupted.

In this image provided by NASA, is an aerial view of Mount St. Helens, active volcano in Washington state, April 2, 1980. (AP Photo/NASA)

The eruption of Mount St. Helens 40 years ago today evoked a strong sense of loss for some local mountain climbers.

The seismic events of 1980 eliminated 1,300 feet of elevation and the popular route along the Forsyth Glacier, erasing the perfectly symmetrical cone of the region’s best early-season training mountain. Rod Nelson saw St. Helens as “the prettiest of all the volcanoes” when he summited it twice in the early ’70s, inspiring him to pursue serious climbing around the world.

“I think one of the reasons I have not been back to climb St. Helens after it exploded is it’s sad that it’s kind of gone,” Nelson said. “It was a beautiful mountain and it’s not anymore.”

A trip to the new summit at 8,366 feet in 2007 still proved enjoyable for Matt Christensen, but he remembers feeling heartbroken after the destruction of a mountain he climbed four straight years with his family beginning in 1973. Joyce Hagen said the second trip up the mountain with her husband, Jeff, in 2008 wasn’t as memorable as the one 31 years earlier, although they appreciated the “really spectacular” views looking down into the mile-wide horseshoe-shaped crater.

The Spirit Lake campgrounds where the Hagens enjoyed steaks, sautéed mushrooms, baked potatoes and wine with fellow members of The Cascadians prior to a 1 a.m. wakeup call no longer exist. Neither do the forested landscapes and clearcuts from logging operations that Christensen recalled seeing as he looked out to the west while standing atop what was Washington’s fifth-highest peak.

Most climbers prior to 1980 traveled from the Timberline parking lot up Dog’s Head and along the Forsyth Glacier, gaining less than 4,000 feet of elevation to the summit.

Christensen and Nelson said nearly the entire trek was on snow when the made their ascents sometime in May. Reaching the top required the technical skills to utilize crampons, ice axes and safety harnesses for some tricky crevasses.

“I would say it was shorter than, say, the easy route on Mount Adams,” Nelson said. “But it was more difficult in the sense it was on glaciers and you had to rope up.”

On his first trip as a senior with some classmates from Selah High School, he decided overcast skies would allow him to forgo sunscreen and protective sunglasses. That turned out to be a valuable lesson for the next time he climbed St. Helens with a University of Washington roommate in 1973, even though the well-conditioned high schoolers made quick work of the short climb before sliding down the chute on Dog’s Head.

“I got probably the worst sunburn I ever got in my whole life,” Nelson said. “My eyes got burned and by 10:00 I couldn’t open my eyes anymore.”

Christensen had even less experience when he first joined his brother and father on Mount St. Helens in 1973. The 12-year-old student at Yakima’s Lewis and Clark Middle School who’d been told he was too young to take The Cascadians’ mountain climbing course had planned to join the group for its annual climb up Mount Adams, but when that got rained out the Christensens decided try St. Helens.

No one in the group knew much about glacier travel, so they learned by watching groups in front of them. That experience helped Christensen establish himself as a serious rock climber with successful trips up El Capitan in California and all of Washington’s volcanoes by the time he climbed St. Helens for the fourth time in 1976.

“It (was) a pretty big summit,” Christensen recalled of St. Helens. “So as we walked back to the actual little rolling high point that was the top, you can see Rainier, Adams and things that are higher, but don’t have a chance to look down.”

Mount Hood was also visible on clear days, and the Hagens even remember seeing Mount Baker to the north. That came as a welcome surprise after they’d nearly cancelled the trip due to bad weather the day before.

Fortunately, the skies cleared overnight and Jeff Hagen said he woke up to the suddenly bright full moon shining through his tent. Only a long wait while a group of 15-20 people from Portland worked their way through a botteneck delayed an otherwise quick 12-13 hour trip up and down the mountain in June.

“We had glorious weather and it was a lot of fun.” Joyce said. “We were novice climbers at that point, so it was good to be with The Cascadians.”

Volcanic activity at Mount St. Helens was nothing more than ancient history for the local climbers as they stood atop the peak, smelling none of the sulfur that permeates Mount Hood’s summit and certain places near the top of Mount Rainier. They saw no cones, craters or other evidence of looming danger from the long-dormant mountain.

That all changed by the spring of 1980, when the mountain began spewing smoke and ash, making it impossible for Nelson to take his new wife there as planned.

Instead, they summited Mount Hood just a little before 8:30 a.m. and begin heading back down the south side toward Timberline Lodge when they heard yelling from those at the top. Nelson’s wife turned down the idea of climbing back to the top to watch the massive explosion.

He still managed to drive back to Yakima that night, slowly making his way through falling ash for nearly the entirety of US 97 north of Goldendale. The Hagens said some of their friends with The Cascadians weren’t so lucky as their engines burned out while trying to drive home from teaching a snow travel class in Packwood.

Memories of climbing St. Helens brought a renewed sense of pride and perhaps a silver lining with the dark cloud that descended over Yakima. The three climbers spent plenty of time over the next few weeks clearing ash out of their yards, just like everyone else in the region.

Nelson went on to climb all over the world and summited some of Earth’s most formidable mountains, including Huascaran in Peru and Cho Oyu in the Himalayas, the sixth-tallest peak in the world at 26,864 feet. He would later look back on those accomplishments in a poem, describing St. Helens as a symbol of his transition from childhood mountaineering to serious climbing.

Christensen similarly used Mount St. Helens as a stepping stone for his climbing career, and it was also the site of his first mountain rescue mission. While Christensen was still in middle school, the principal called him out of class so he could join his mother after five students from the University of Puget Sound died in an an April 1975 avalanche.

It’s no surprise Christensen struggled to think of another place as ideal for young, aspiring climbers to learn on a single day’s trip. He said although Mount Adams or Hood might come close, no other mountain in the region can replace St. Helens’ former unique blend of technical challenges without a physical, grinding climb.