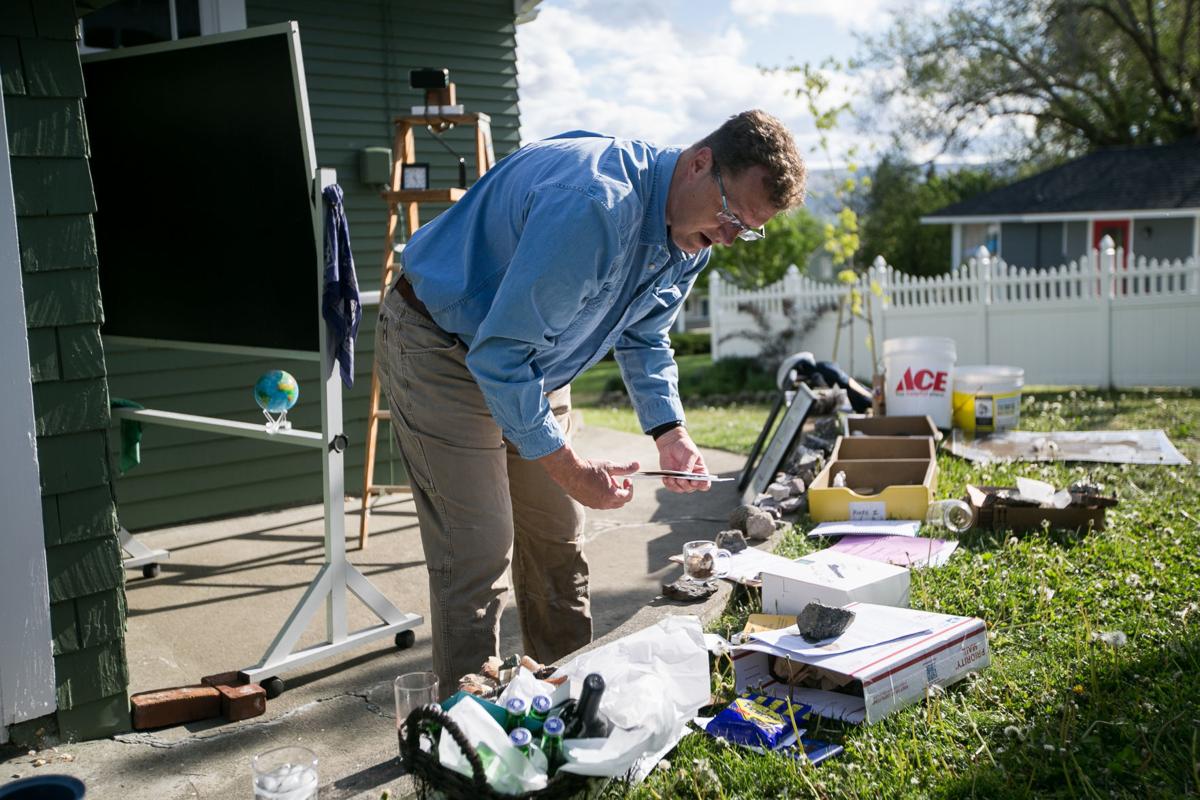 Nick Zentner, geologist and senior lecturer at Central Washington University, prepares to live stream his public television segment “Nick on the Rocks” from his backyard in Ellensburg, Wash., on Wednesday, May 13, 2020. 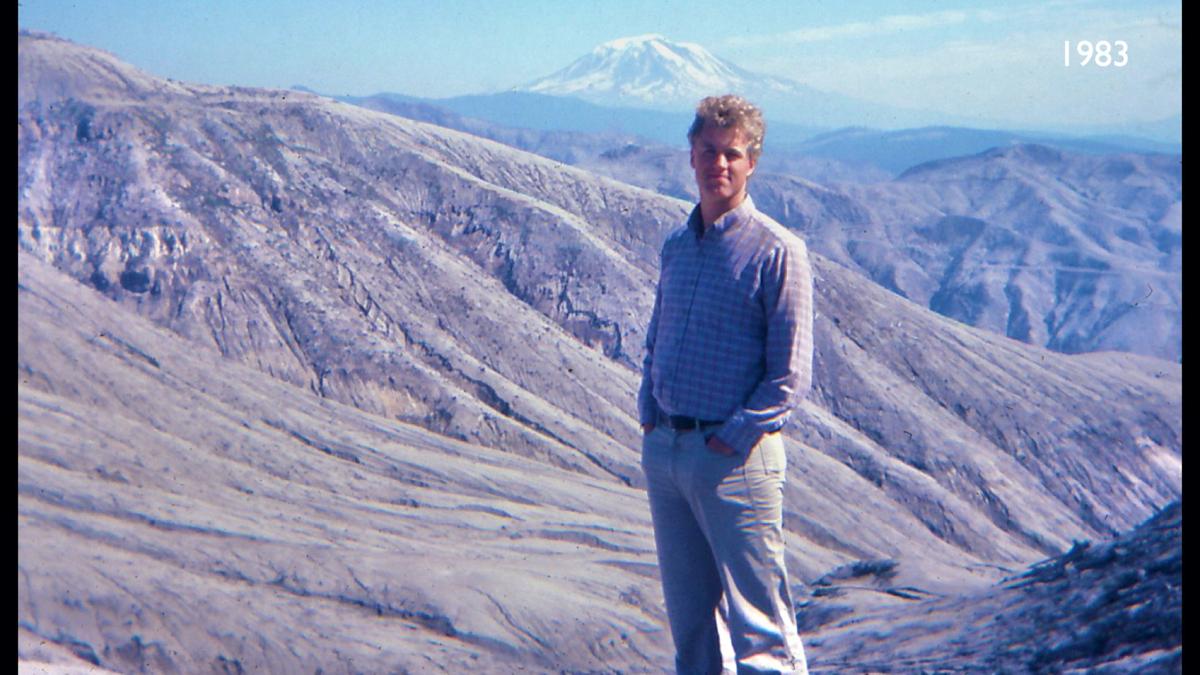 Nick Zentner poses for a portrait in front of Mount St. Helens in 1983. “It was the afternoon that hooked me into geology,” he said. “I’ve been in it ever since.” 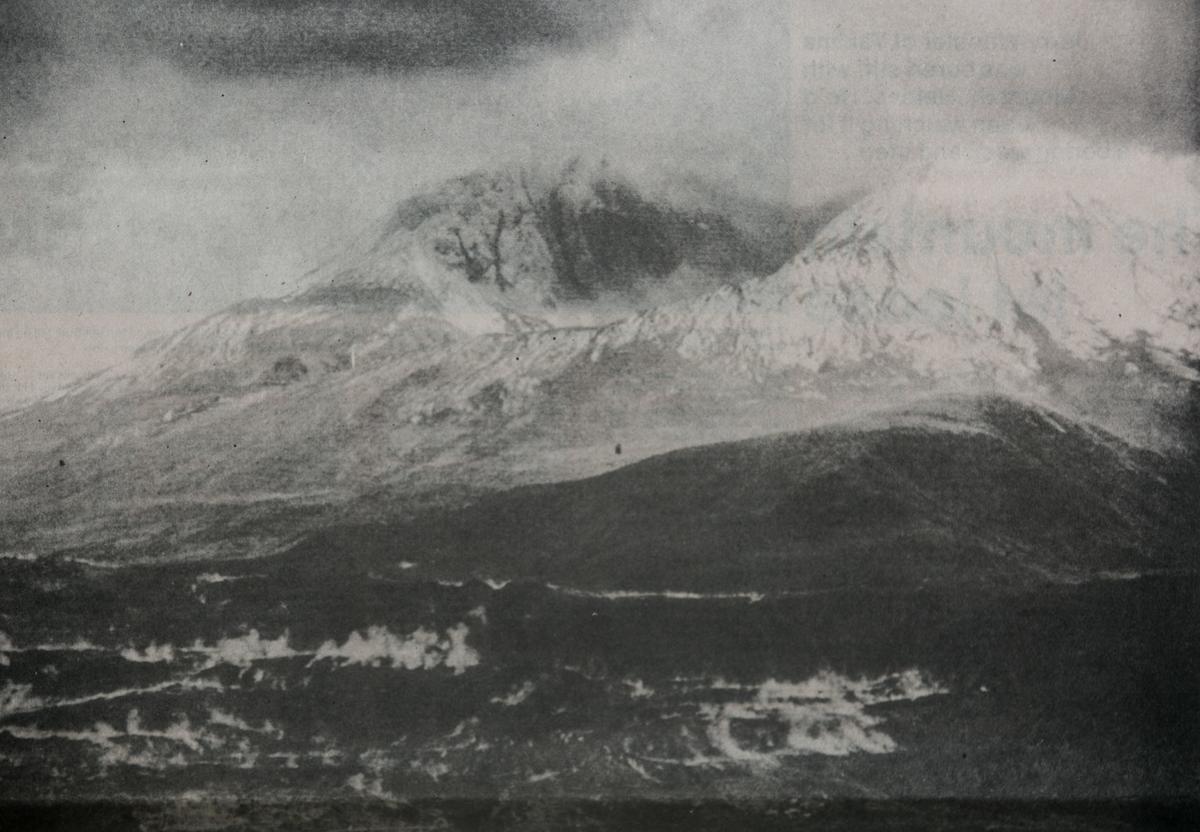 FILE—Mount St. Helens gapes skyward from the giant crater blasted into the mountain Sunday, May 18, 1980. 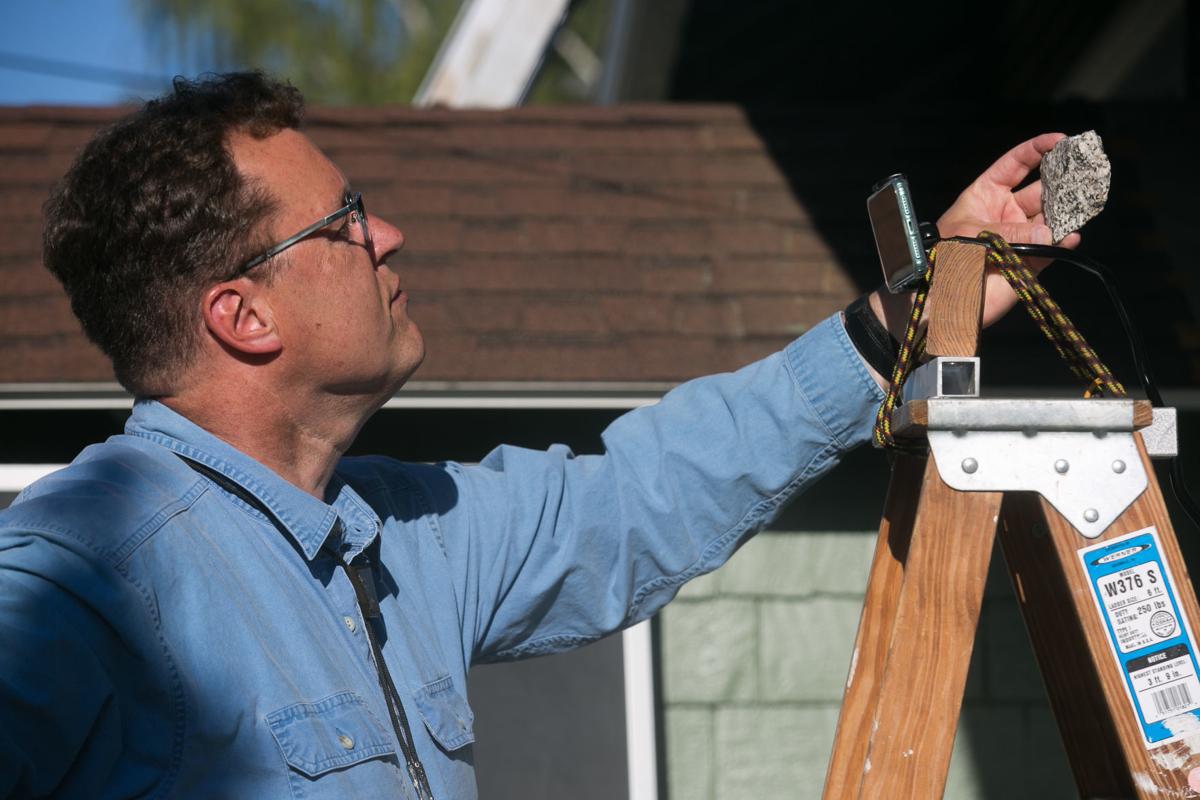 Nick Zentner, geologist and senior lecturer at Central Washington University, live streams a close up view of an igneous rock during his public television segment “Nick on the Rocks” from his backyard in Ellensburg, Wash., on Wednesday, May 13, 2020. 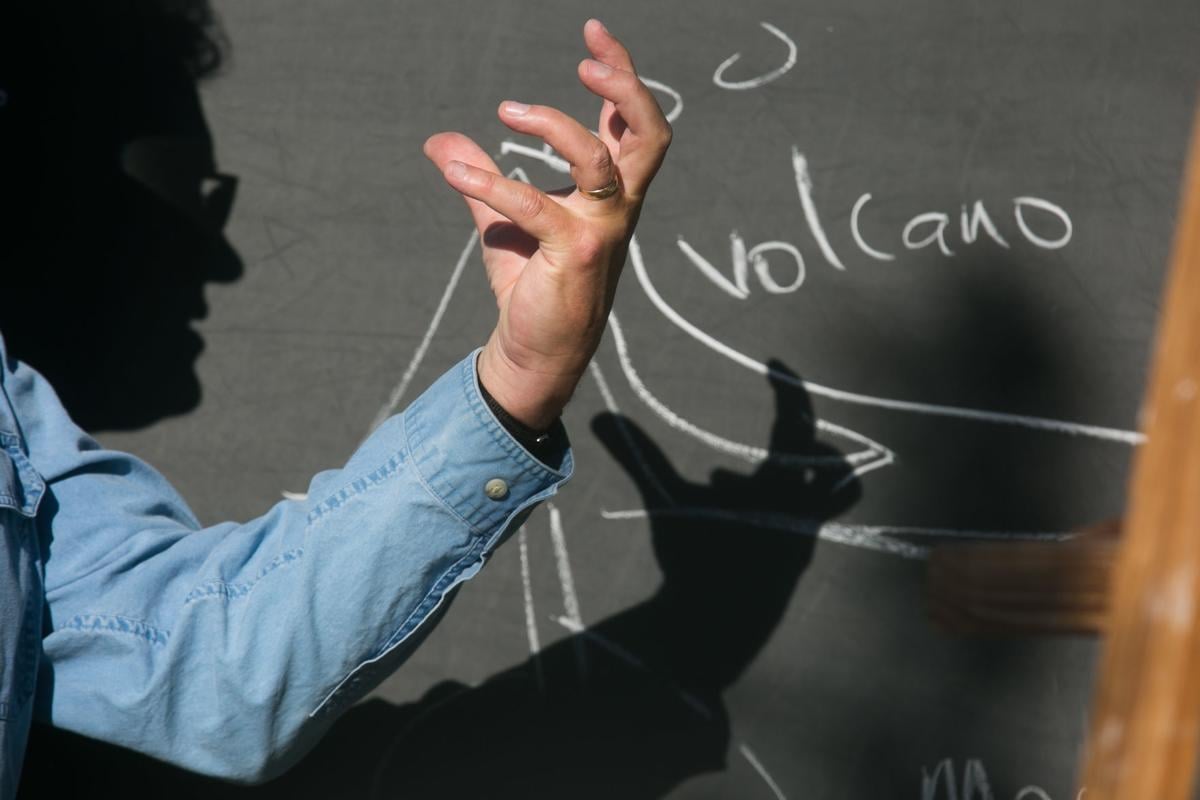 Nick Zentner, geologist and senior lecturer at Central Washington University, explains the activity of a volcanic eruption during a live stream of his public television segment “Nick on the Rocks” from his backyard in Ellensburg, Wash., on Wednesday, May 13, 2020.

Nick Zentner, geologist and senior lecturer at Central Washington University, prepares to live stream his public television segment “Nick on the Rocks” from his backyard in Ellensburg, Wash., on Wednesday, May 13, 2020.

Nick Zentner poses for a portrait in front of Mount St. Helens in 1983. “It was the afternoon that hooked me into geology,” he said. “I’ve been in it ever since.”

FILE—Mount St. Helens gapes skyward from the giant crater blasted into the mountain Sunday, May 18, 1980.

Nick Zentner, geologist and senior lecturer at Central Washington University, live streams a close up view of an igneous rock during his public television segment “Nick on the Rocks” from his backyard in Ellensburg, Wash., on Wednesday, May 13, 2020.

Nick Zentner, geologist and senior lecturer at Central Washington University, explains the activity of a volcanic eruption during a live stream of his public television segment “Nick on the Rocks” from his backyard in Ellensburg, Wash., on Wednesday, May 13, 2020.

Dwight Raymond “Rocky” Crandell, an American volcanologist, was among a group of scientists who in the 1970s predicted that Mount St. Helens might erupt before the end of the century.

Crandell, who died in 2009, kept work papers that were left to his daughter when he died.

A week before the 40th anniversary of the May 18, 1980, eruption that confirmed Crandell’s prediction, the files were passed along to Nick Zentner, an Ellensburg geologist and senior lecturer at Central Washington University known for translating scientific findings for the general public.

“He was a key part of this build up (to the main eruption) and a key geologist trying to make decisions of who should get out of the area,” Zentner said of Crandell.

Zentner is known for his public television segment “Nick on the Rocks,” which delve into geological topics ranging from volcanoes to earthquakes, coulees, canyons, landslides, groundwater and mineral identification. During the COVID-19 pandemic, he transformed this into “Nick at Home,” YouTube videos he records from his backyard.

On Sunday at 9 a.m., he said, he’ll use the hour-long live stream to reflect on the events surrounding Mount St. Helens’ eruption, potentially sharing pieces of Crandell’s files and allowing viewers to jump in with their questions and memories.

In the lead-up to the anniversary, he shared some lessons learned from Mount St. Helens, and his own connection to the eruption.

In 1983, Zentner was a self-proclaimed floundering student at the University of Wisconsin who was running out of money. He had finished his junior year and still didn’t have a major.

During a break from college, he was in the Pacific Northwest and made a spontaneous visit with friends to the foothills of Mount St. Helens. Zentner had heard of the eruption three years prior, but knew nothing of geology at the time.

The eruption left behind a moon-like scene, he said. It was lifeless and trees were still toppled over.

“It was kind of raw up there. I remember endless gravel roads and dust up there,” he said. “I’m a Midwestern guy. I’d seen green rolling hills and cows and stuff, so this kind of a scene was just otherworldly.”

He wanted to know more. But without a visitor center, plaques or the internet, there were no immediate answers on hand. Returning to college months later, he took a Geology 101 course to find out more — a decision that led to a life-long career in geology. Since then, he’s visited Mount St. Helens’ summit several times.

Zentner is unusual in his field, he says, because instead of getting a PhD in geology, he stopped at a masters. This means while colleagues are doing research, getting published or serving on university committees, he spends his time translating geological findings for the public.

Much like he was eager to know more about Mount St. Helens, he said there is a widespread interest in geology, especially in the Pacific Northwest.

His favorite topic remains Mount St. Helens, and the lessons learned in the 40 years since it blew.

Mount St. Helens is among more than a dozen Cascade stratovolcanoes. Zentner said a subducting ocean plate is diving beneath the Pacific Northwest to form them.

Geologists are monitoring these magma bodies “and trying to understand if there is a pattern to what’s happening beneath,” he said. “We cannot forecast the next eruption and that’s because we still, in the year 2020, are not able to understand when a magma system becomes active again.”

That’s largely because eruptions happen with such infrequency that there is limited information to study, he said. But there are some indicators.

For two months before the big 1980 eruption, for example, there was activity within the Mount St. Helens, Zentner said. As small events built up over weeks, scientists and public officials warned community members to leave the area for safety. But some did not heed the warnings, and 57 people died in the eventual blast.

Since then, surveillance has improved significantly.

“If you up your collection of data, then your chances of being more prepared in the future will be more accurate,” said Zentner.

GPS technology is installed on volcanoes to detect tiny movements on slopes. Scientists monitor growing bulges and the release of gases.

There’s a group of U.S. Geological Survey experts dedicated to observing Mount St. Helens, compared to before the eruption, when little monitoring was being done and the Johnston Ridge Observatory near the volcano was yet to be built.

The observatory is named after David Johnston, a geologist who was monitoring Mount St. Helens the day of the eruption. Sitting at a distance then believed to be safe, he was killed in the event.

“Even 10 years later, there was technology so that this could be done with machines instead of David sitting there,” said Zentner. “Monitoring is much safer and more precise.”

The first is a mushroom cloud, or the dust falling out of the sky downwind, which can be seen in iconic footage of the eruption.

There is also a powerful pyroclastic flow of gas and volcanic matter going up and over mountain ridges. Zentner said this is what killed most of the people in the surrounding area the morning in May 1980.

The next thing is a landslide. In Mount St. Helens’ case, most of the volcanic structure fell away, creating the biggest mudslide in recorded history flowing down the Toutle River.

Last, fresh lava starts to dome up in the center of the volcano’s crater.

“It’s a four-ring circus oftentimes when you have these cone volcanoes erupt,” Zentner said.

Today, he said thousands of people live in harm’s way near “these dang cones.”

Volcanic mud flows can travel up to 60 miles from the site of a stratovolcano eruption, said Zentner. They have a pattern of following rivers flowing away from the mountain, many of which have major roads built alongside them, he said. This means people living in the river valleys between Mount Rainier and Commencement Bay in Tacoma, for example, cause great concern for geologists.

“It’s a bad arrangement with most of our population in these future flood ways,” he said.

The good news for the Yakima Valley, he said, is that none of the local rivers connect to an active stratovolcano. All of the rivers of concern are west of the Cascade range. Which means mud flows aren’t a big concern in the Valley.

Cinder cones throughout the region haven’t been studied as much. They also are volcanic, but are much younger and smaller than stratovolcanoes. Zentner describes these as “a bunch of popcorn sitting in a beautiful, conical pile.”

Beacon Rock in the Columbia River Gorge was once one of these active volcanoes. People drive past them every day without realizing what they are, he said. A number of them can be found around Goldendale and Bend, Ore., Zentner said.

“It’s possible one of these will be the next eruption, instead of stratovolcano,” he said.

There’s still too much unknown to be sure. But one lesson from Mount St. Helens is clear, he said: It’s important for the general public to listen to the recommendations of scientists like Mount St. Helens’ Crandell as warning signs do present themselves.

“If you’re a sane person, you can get out of the area as the public officials tell you to leave,” he said.