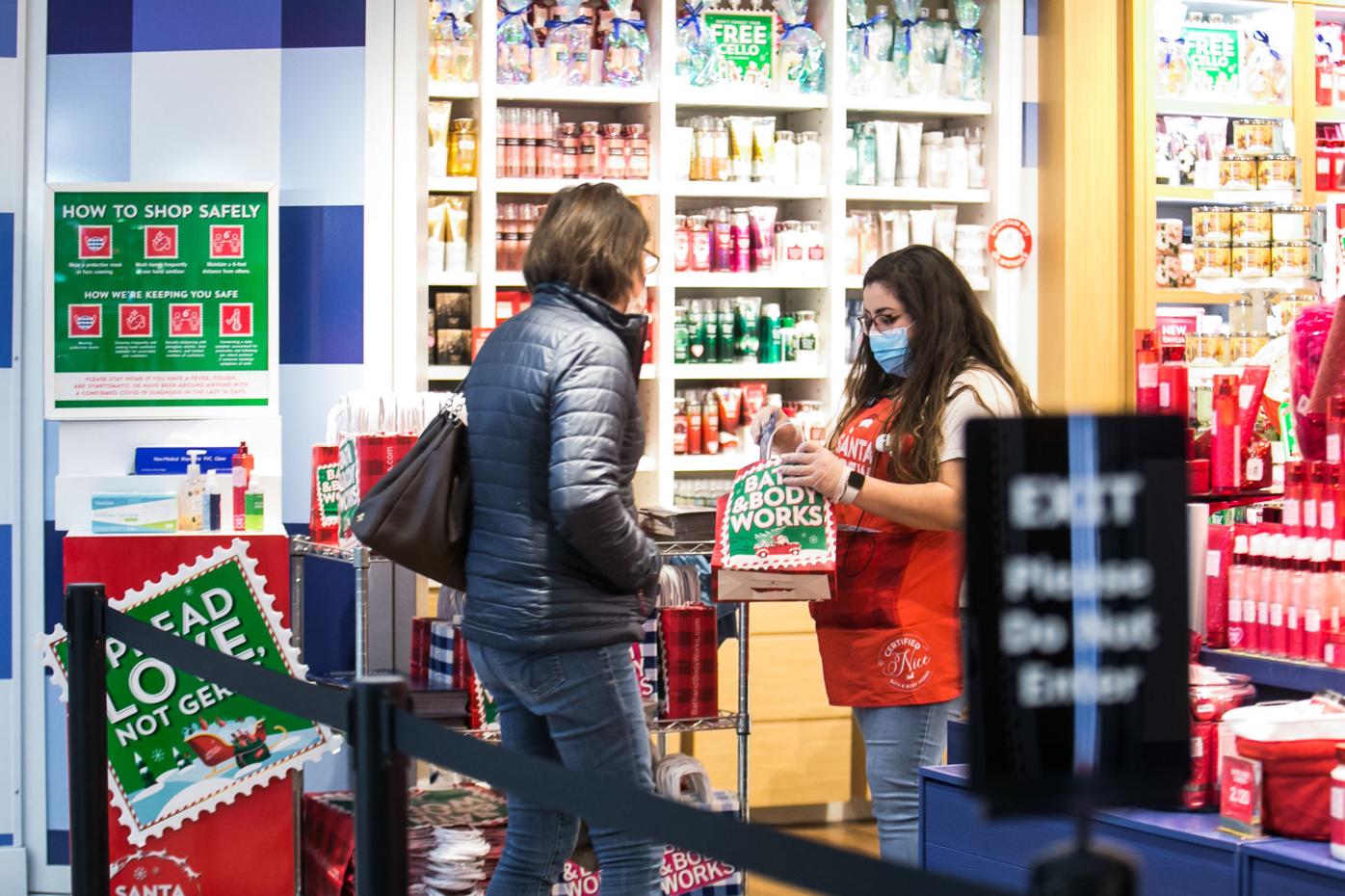 A Bath and Bodyworks employee wears a face covering as she hands a paper bag to a customer Tuesday, Nov. 17, 2020, at Valley Mall in Union Gap, Wash. 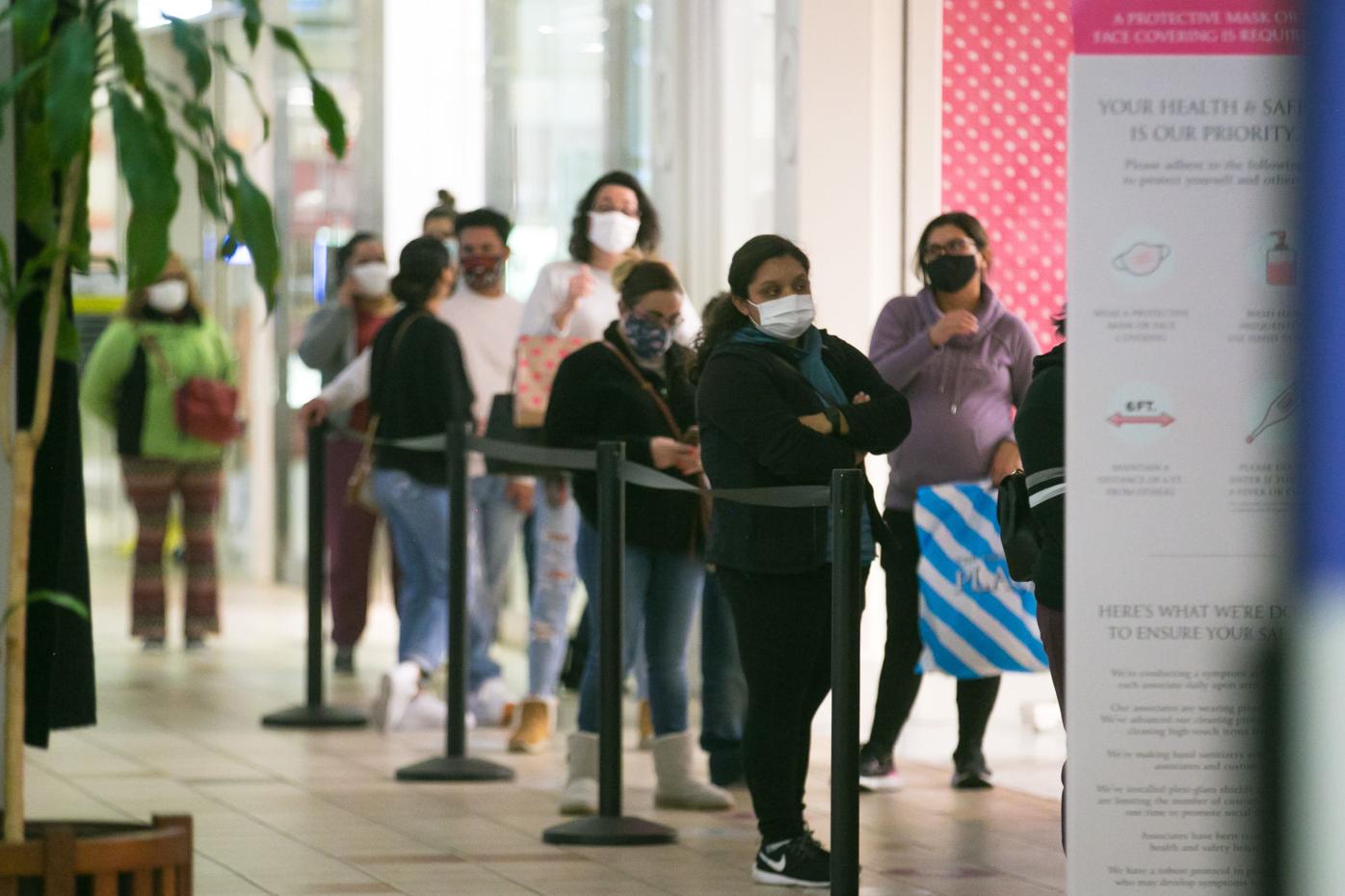 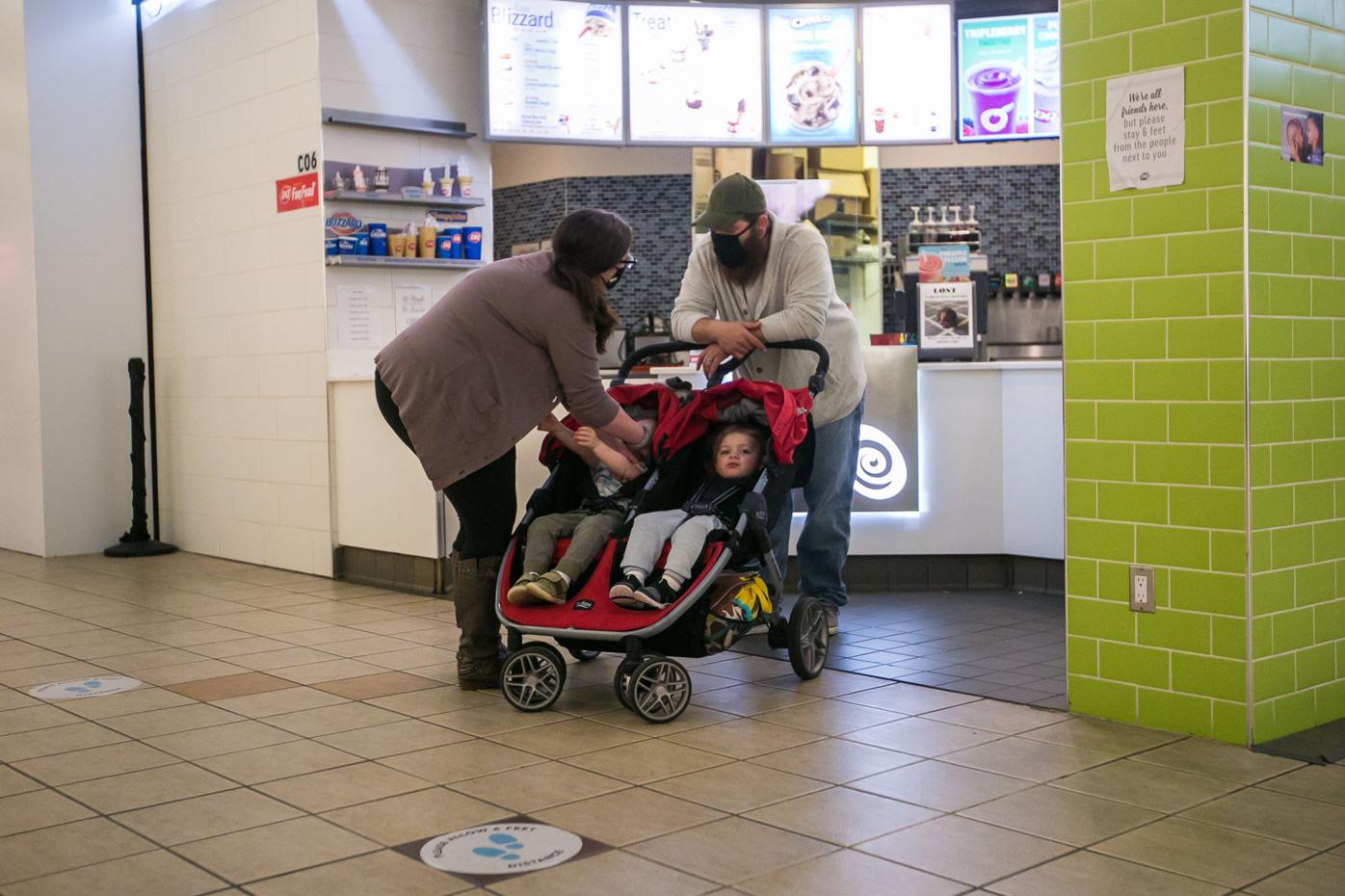 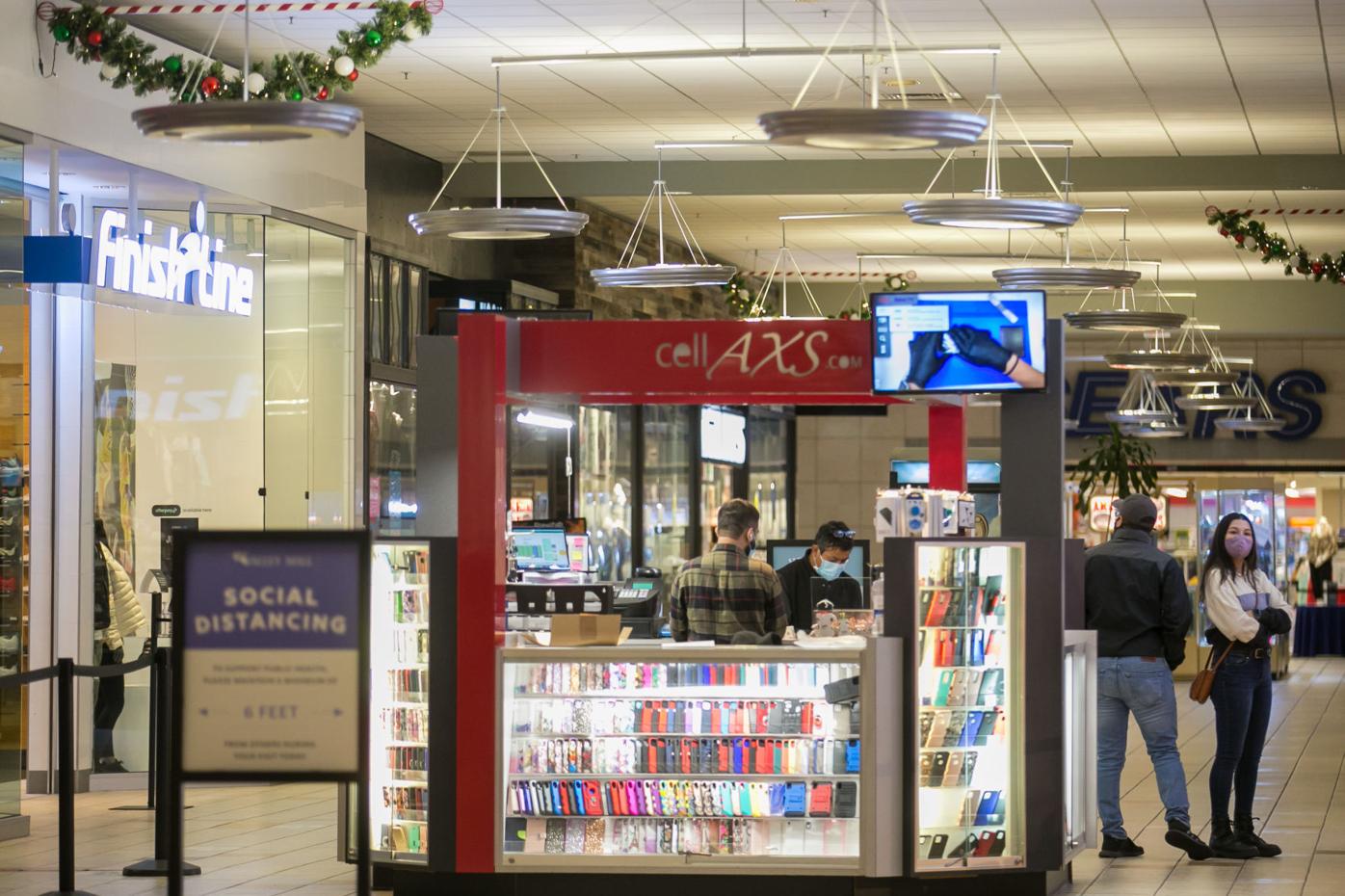 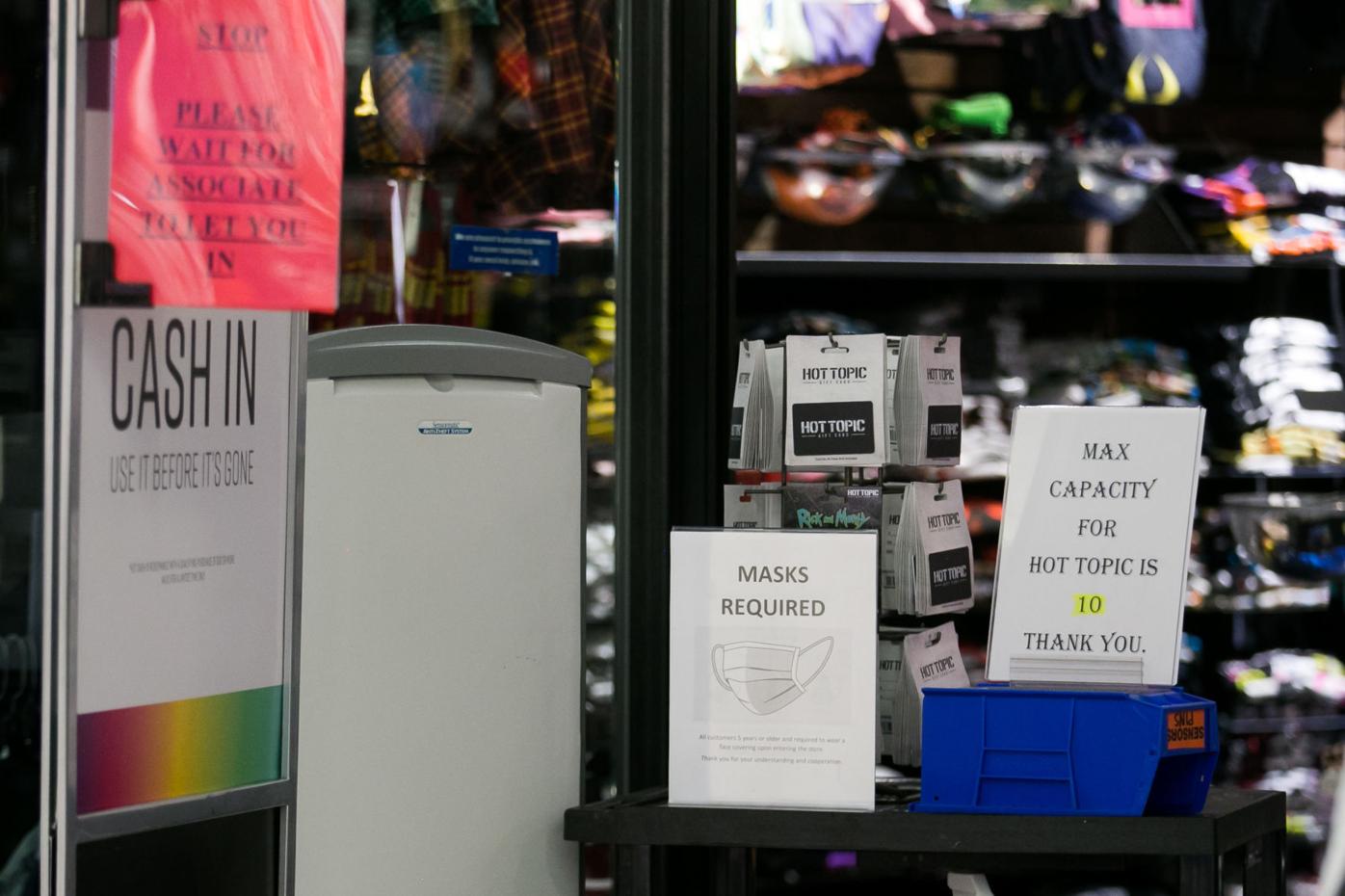 Signs that bear the inscription “Masks required” and “Max capacity for Hot Topic is 10” stand near the front entrance of Hot Topic at Valley Mall in Union Gap, Wash., Tuesday, Nov. 17, 2020.

A Bath and Bodyworks employee wears a face covering as she hands a paper bag to a customer Tuesday, Nov. 17, 2020, at Valley Mall in Union Gap, Wash.

Signs that bear the inscription “Masks required” and “Max capacity for Hot Topic is 10” stand near the front entrance of Hot Topic at Valley Mall in Union Gap, Wash., Tuesday, Nov. 17, 2020.

Among the rules announced by Gov. Jay Inslee that went into effect Tuesday, retailers cannot exceed 25% capacity. Restrictions are set to continue for at least the next four weeks, through Dec. 14.

At the Fred Meyer store in Yakima, 25% amounts to about 635 customers. Store director Dan Gwynne said even at peak hours Monday, the store wasn’t anywhere near that capacity.

The store’s parent company, Cincinnati-based Kroger Co., uses a technology called QueVision, scanners that detect body heat to count the number of people at its stores. The technology was intended to help stores determine when to open additional checkout lines but has been a valuable tool in restricting capacity during the COVID-19 pandemic.

At the Yakima Fred Meyer store’s peak at just after noon and before 6 p.m. Monday, there were 367 and 361 customers, respectively.

However, Gwynne is prepared for a different scenario next week, during the last-minute Thanksgiving preparation rush and the typically busy shopping weekend that follows the holiday. During those times, it’s likely that the store will hit its 600-plus customer limit and require people to wait outside.

“They need to come in and do their shopping now,” Gwynne said about shoppers who want to avoid crowds or lines next week.

It seems there are shoppers wanting to avoid crowds, as indicated by the recent increase of users for Fred Meyer’s curbside pickup service, Gwynne said. During the state’s stay-at-home order this spring, the service was so popular it wasn’t unusual to have to reserve a spot a week or more in advance.

Gwynne said he’s not expecting such a backlog this time around as the service is well-staffed, but it has been more challenging to secure a pickup reservation for the service, especially for the same day.

“We have a better plan this time,” he said.

Brandon Cavender and Cindy Cavender were pushing their two sons, ages 3 and 1½, in a stroller at the Valley Mall. They were aware of the new restrictions but said the change wasn’t that noticeable as they walked down the corridor of the Union Gap shopping center.

“We just took a half a step back,” Cindy Cavender said. “It’s not that bad.”

Some of the mall’s stores, such as Victoria’s Secret and Bath & Body Works, had short lines at the door, but, in general, shoppers could browse and shop without much inconvenience.

Valley Mall marketing manager Jacob Butler noted that the new limit on capacity was not that much lower than the 30% it had recently. And some regulations that were in place for Yakima Valley retailers a few months ago, like a 30-minute time limit, aren’t in effect now.

The most significant change, he said, was that the mall restaurants must end indoor dining at 12:01 a.m. Wednesday.

Tuesday typically isn’t a busy day for the mall since people are at work, Butler said.

But the mall is prepared to keep a much closer watch on crowds during on weekends and during the holiday shopping season.

During those times, security will be stationed at mall entrances keeping track of people entering and exiting. The guards will use an app to track capacity and start having people wait outside when the mall is close to capacity — which, at 25%, is about 2,000 people.

“Heading into the holiday season, we have plans in place,” Butler said.

The Vanished: 25 people in Yakima County on updated list of missing Indigenous persons

For months now, Yakima Valley medical experts have pleaded with people to slow the spread of COVID-19 by wearing masks, maintaining social dis…