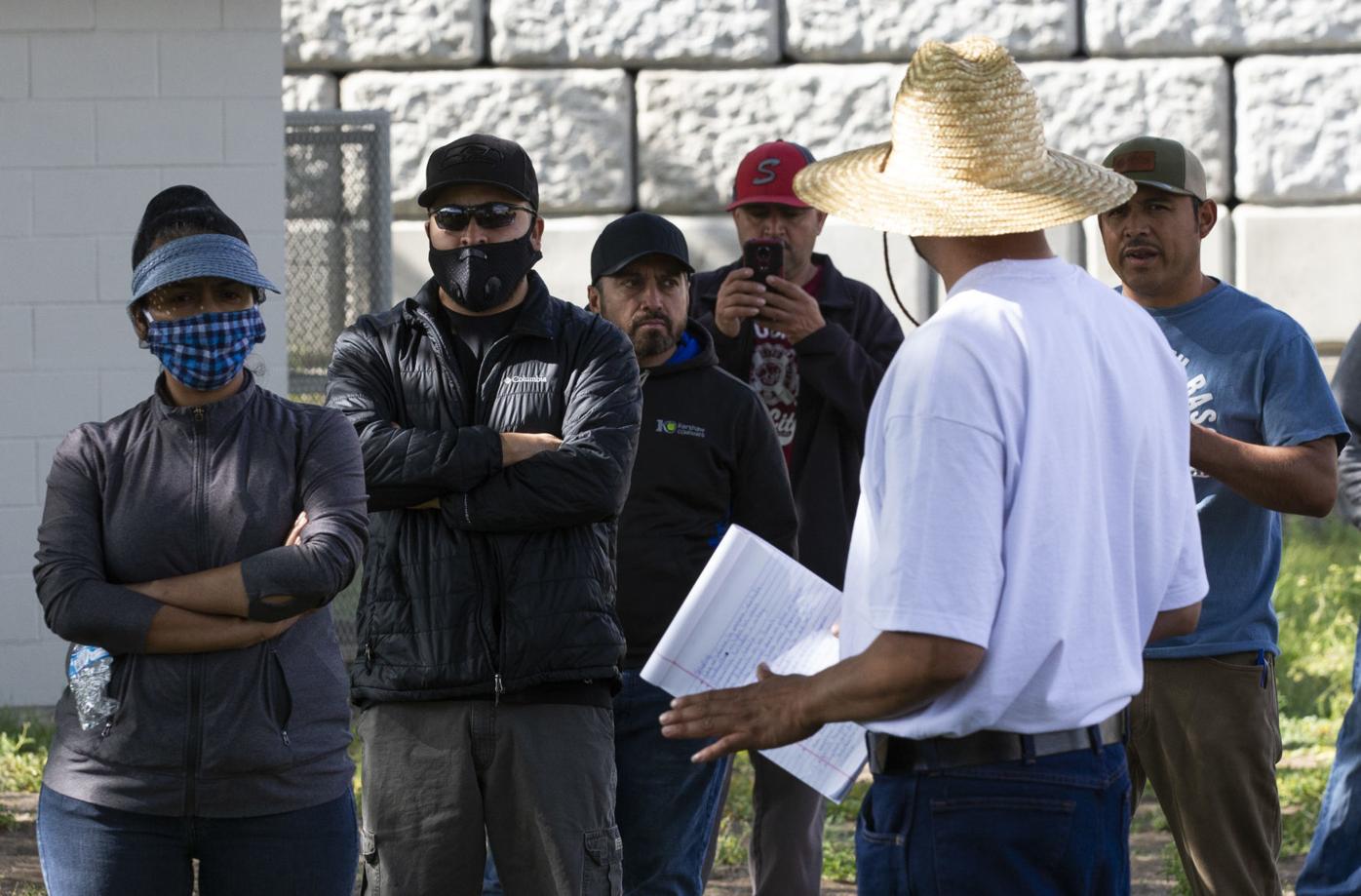 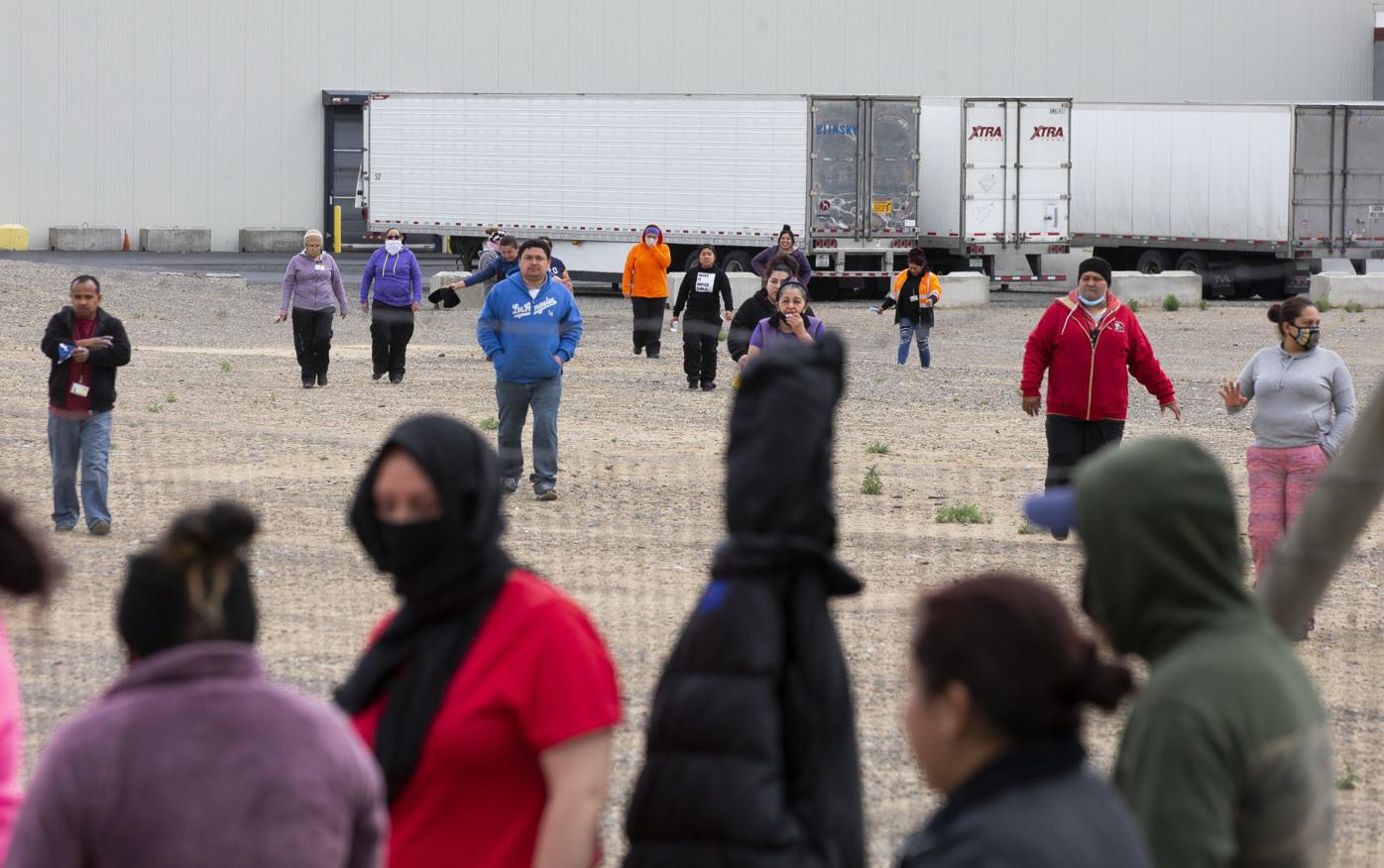 Workers from the Matson Fruit Co.'s shipping facility walk out to join other workers who were already protesting in front of the business Tuesday, May 12, 2020, in Selah, Wash. 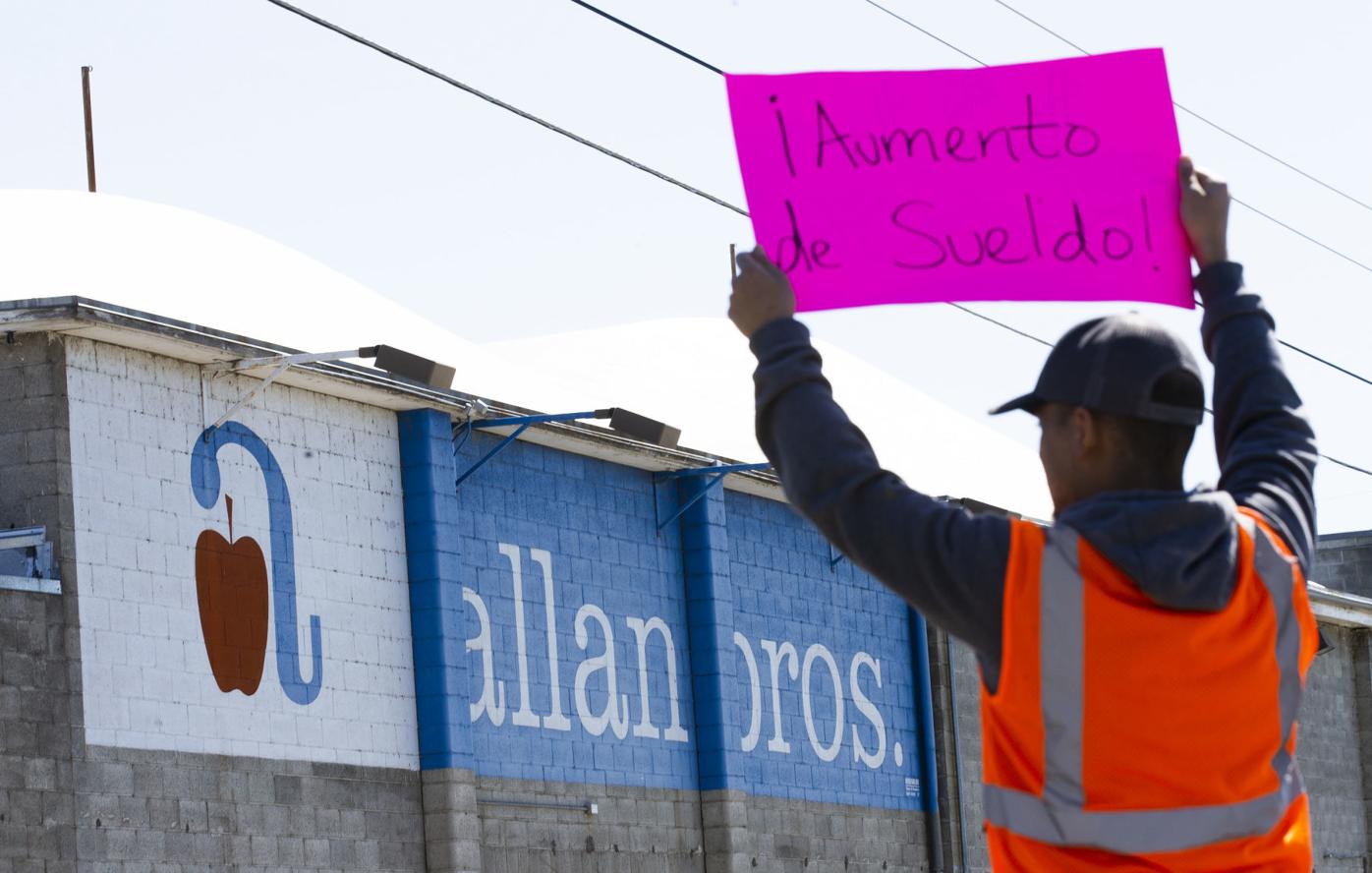 Workers from the Matson Fruit Co.'s shipping facility walk out to join other workers who were already protesting in front of the business Tuesday, May 12, 2020, in Selah, Wash.

Ramón Torres and Edgar Franks arrived Friday in the Yakima Valley to provide support for workers protesting at Allan Bros.

Torres and Franks work at Familias Unidas por La Justicia, a union that represents farmworkers in Skagit County. Torres is its president and Franks its political director. Familias Unidas por La Justicia garnered attention recently for filing a lawsuit against the state Department of Labor and Resources and the Department of Health, hoping to secure stricter rules to protect laborers from COVID-19.

They were still here Tuesday, providing support to not only Allan Bros. workers in Naches, but also to protesters at Matson Fruit Co. in Selah and Frosty Packing in Yakima.

Workers “shouldn’t have to be put in the position to choose between their job and their well-being and their family’s well-being,” Franks said during an interview at Matson Fruit.

Officials at all three companies maintain they have worked to meet federal, state and local health guidelines, including those from the Centers for Disease Control and Prevention, the state Department of Labor and Industries and the Yakima Health District.

“Everyone is scared to get infected,” said Rosa Leon, 28, who has worked for Matson Fruit for four years.

All three warehouses have reported cases of COVID-19, and Yakima Health District figures provided to the Herald-Republic Tuesday afternoon show there are about 310 confirmed COVID-19 cases in the agriculture and food production industry — roughly 15% of total cases, which surpassed 2,000 Tuesday.

Word of confirmed cases spread among fruit packers in recent weeks. That has generated concern among workers over whether companies have been doing enough to keep them safe.

Alexi Coptecon, 22, was among the more than 90 workers protesting at Frosty Packing in Yakima. Some people refer to the company as Jack Frost Fruit, which is the name of the previous company that operated there.

Coptecon said the company was not providing masks to all workers, noting that some employees had to purchase them.

“I don’t feel safe coming back to my house,” he said. “I don’t want to take the virus home with me.”

Officials from all three companies said they have met or will meet with workers to listen to their concerns.

At Allan Bros., CEO Miles Kohl and two other company officials met with two groups of workers Thursday after they walked out and started protests.

Kohl said during an interview at Allan Bros. Tuesday there were 16 confirmed COVID-19 cases among Allan Bros. packing plant workers and one confirmed case at its orchard operation.

Part of that process was inviting the Yakima Health District to evaluate the company’s safety measures, Kohl said.

Bravo also provided notes from that site visit, which said Allan Bros. had hired a security company to do employee temperature and screening checks, provided plastic separators between workers and implemented a cleaning schedule for all surfaces throughout the plant.

It also noted other measures the company had not yet implemented, such as issuing face shields. Those shields were provided to employees Monday when the company resumed operations.

Allan Bros. officials asked the Yakima Health District to return to the facility for a second evaluation when the plant was in full operation.

Kohl said he felt confident the company was doing everything it could to provide a safe working environment, but added that he was willing to implement additional procedures based on feedback from health agencies and employees.

“We’re not going to put anyone in an environment we feel is not safe,” he said.

Bruner said the workers provided a long list of concerns, and company officials are no evaluating whether Frosty can implement additional measures in response. He also said the company had two confirmed COVID-19 cases.

Bruner said the company was not selling masks. Rather, it provides masks to employees who must work in close proximity with one another as part of their job.

They’ve allowed workers to wear masks they brought from home, but the company wanted to keep its stockpile for workers who needed additional protection. He said it’s possible workers were selling homemade masks.

“We got some people that won’t work around anyone for the entire day,” he said in a phone interview. “We’re trying to maintain the supply to make sure it’s covered in the areas that need it.”

Jordan Matson of Matson Fruit Co. sent an email Tuesday in response to a request for comment. According to the statement, the company had three confirmed COVID-19 cases as well as three presumptive cases.

The company’s statement said that it has implemented new policies and procedures to minimize employee risk and met with a Yakima Health District official to inquire about additional measures the company should consider.

The statement said workers notified their supervisors Tuesday morning that they would not be at work.

“We look forward to meeting with the group’s representatives to see what steps Matson Fruit Co. can implement to increase everyone’s safety while abiding by local, state and federal law,” the company wrote in its statement.

The biggest demand among protesters is hazard pay.

A $2-per-hour boost in pay has provided by some retailers during the COVID-19 pandemic, including Fred Meyer and Walmart.

“We appreciate them coming to work,” operations manager Al Pineda said in a phone interview Monday. “We decided to compensate them accordingly.”

The amount, according to workers, was $100 a week. Pineda declined to reveal the number of people working at the company.

For Franks of Familias Unidas por La Justicia, a $2-an-hour increase should be the minimum workers receive, considering the risk of sickness and death they face going to work.

“Lots of their co-workers are getting sick,” he said.

While she has heard about the company’s efforts to implement additional safety measures, she is not satisfied.

“We haven’t got answers on what we asked for,” she said.

“We’ll continue to work toward making a decision on that,” he said.

Kohl said that Allan Bros.’ focus was initially on ensuring a safe working environment. Now, he said, the company is looking into how it can provide additional compensation that would not negatively impact the company’s financial well-being.

Apple prices have been declining, and the company has reduced its production rate — it’s operating at about 60% of normal capacity — due to social distancing measures. That also has impacted how much revenue the company can generate, he said.

“You want to pay every employee more money,” he said. “We have to consider that, however, with the constraints we have in the broader economy and the tree fruit industry.”