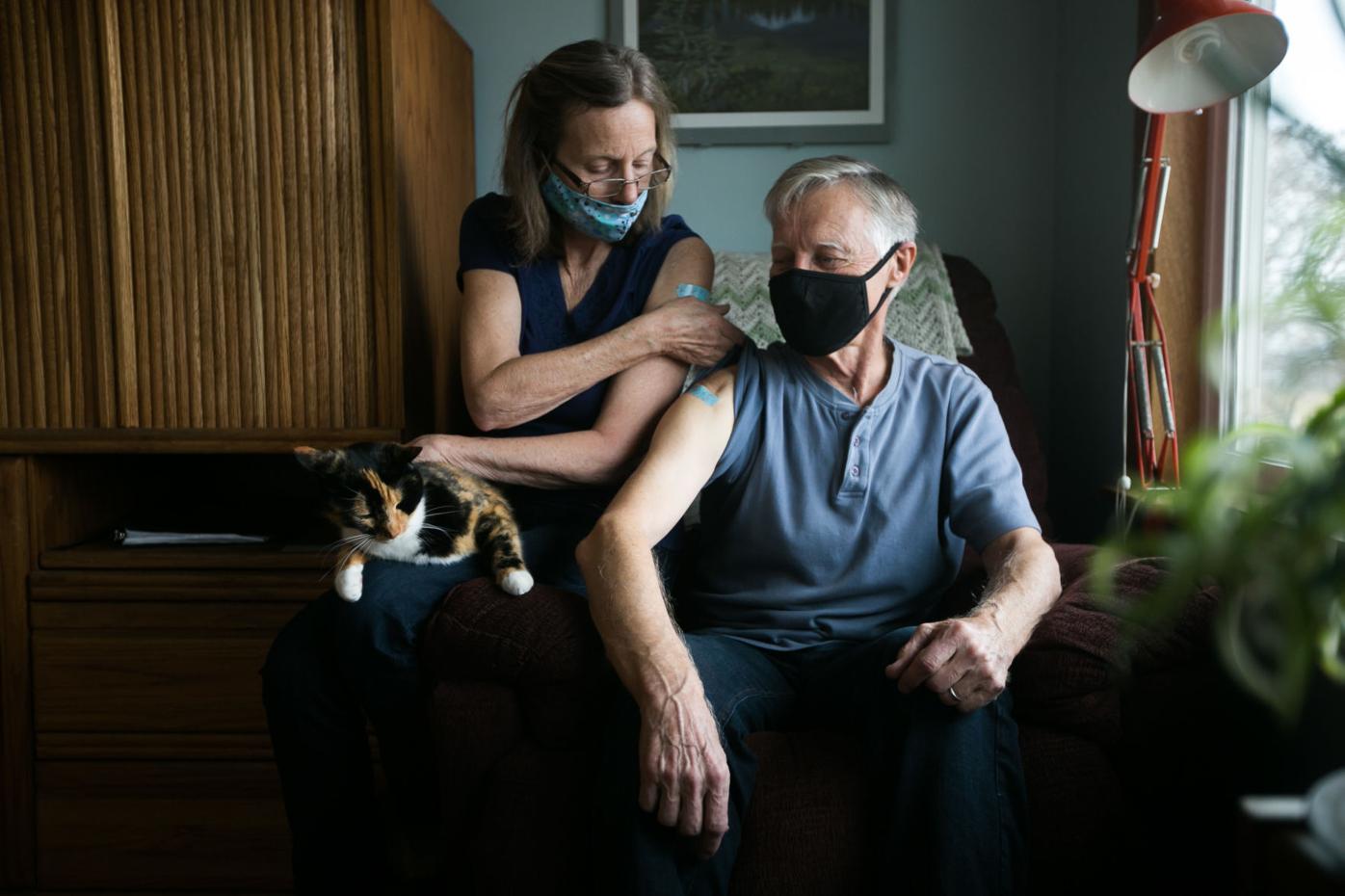 Peggy Haskett, left, and Mike Haskett display their Band-Aids after receiving the Moderna COVID-19 vaccine Thursday, Jan. 21, 2021, at their home in Yakima, Wash. Mike and Peggy are members of the Yakima & Selah Neighbors’ Network, a volunteer-based nonprofit organization that provides limited services to local seniors. The nonprofit offered appointments for volunteers to receive the vaccine. 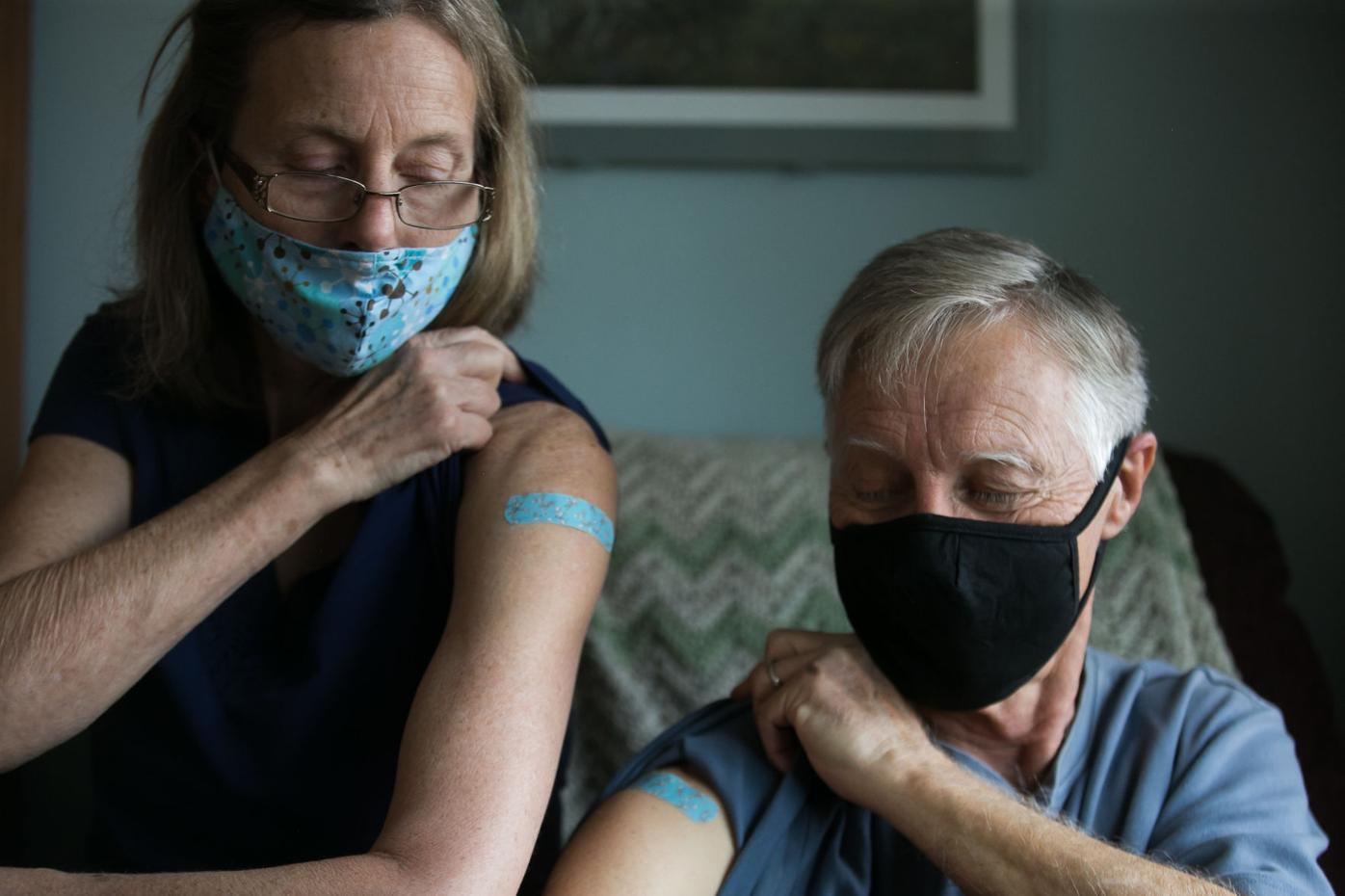 Mike and Peggy Haskett display their Band-Aids after receiving the Moderna COVID-19 vaccine Thursday, Jan. 21, 2021, at their home in Yakima, Wash. 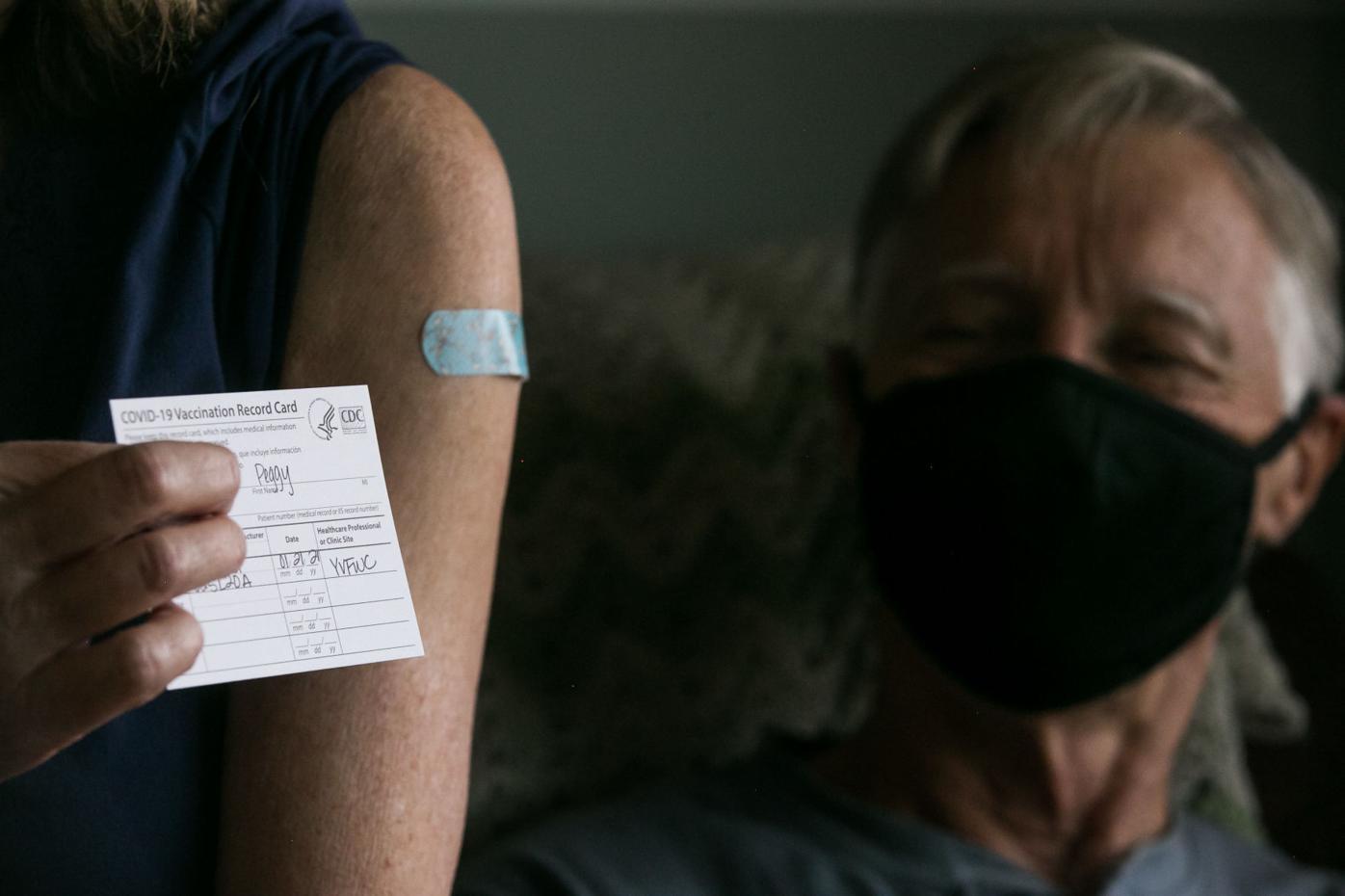 Peggy Haskett, left, and Mike Haskett display their Band-Aids after receiving the Moderna COVID-19 vaccine Thursday, Jan. 21, 2021, at their home in Yakima, Wash. Mike and Peggy are members of the Yakima & Selah Neighbors’ Network, a volunteer-based nonprofit organization that provides limited services to local seniors. The nonprofit offered appointments for volunteers to receive the vaccine.

Mike and Peggy Haskett display their Band-Aids after receiving the Moderna COVID-19 vaccine Thursday, Jan. 21, 2021, at their home in Yakima, Wash.

After calling Yakima pharmacies and health care offices for a few weeks, Mike Haskett wasn’t sure how he and his wife Peggy could receive the COVID-19 vaccine.

And Haskett realized he wasn’t alone.

“We had a couple of friends who are as confused as we are,” said Haskett, a 75-year-old West Valley resident. “They reached out to us and asked, ‘What do you know?’”

While Gov. Jay Inslee and state public health officials have urged residents 65 and older to get vaccinated, several Yakima Valley residents said the process seems dependent on chance and timing.

In addition, local health districts and the state hospital association question whether the state has a distribution system that can handle an expanded vaccination campaign.

Stephen Hovanes received a phone call Sunday from a friend who had heard Yakima Valley Memorial Hospital was providing vaccinations.

Hovanes was able to get vaccinated Monday.

Hovanes, 71, considers himself lucky he had that contact, as he wasn’t able to easily find information on how to get vaccinated.

He imagines the path is even more difficult for people in marginalized communities.

Memorial officials said they distributed more than 600 vaccines last weekend after crowds lined up in front of the hospital. The Yakima Health District said the crowds materialized based on “misinformation on social email and through email.”

The district urged Yakima Valley residents to not just show up at Memorial or other clinics to receive a vaccine.

Memorial officials said they did not advertise or set up a mass vaccination, but decided to go ahead since so many people were already at the hospital.

Still, Hovanes was bothered by the random nature of his vaccination. He wants health officials to develop a system where people can sign up for a vaccination and be notified when an appointment is available.

“I want all of us to get vaccinated,” he said. “I’m glad I got vaccinated, but it was pure chance.”

Earlene Barnes didn’t expect to put a lot of effort into getting a COVID-19 vaccination. Barnes, 82, is in a priority age group, and she had learned that Brookdale, the assisted care facility where she and husband Ben live, had scheduled vaccinations for early January.

That day came and went, and in time the event was canceled. There was no clear indicator of when the vaccinations would be rescheduled.

Tired of waiting, Barnes decided to take it on herself and called Memorial and several primary care clinics.

Barnes and her husband both have managed to avoid getting COVID-19. Before moving to Brookdale, they had lived in Tieton, where they weren’t near many people.

After moving to Brookdale, their only trips are to the grocery store and they wear masks outside their apartment.

They’ll continue to take those safety measures as they wait for a vaccination opportunity.

“We’ve always taken care of ourselves,” she said.

Meanwhile, Haskett was beyond frustrated.

He kept being sent to different places. One pharmacy, for example, claimed that the vaccines were in another location. When he went to call that location, employees said that was not the case.

The people he talked to were just as frustrated, including one at Memorial.

“The person I talked to just acknowledged that it’s been confusing, especially with Inslee’s message that we can go out and should get it now,” Haskett said.

Haskett heard from the staff at Yakima & Selah Neighbors' Network, an organization that enables seniors to work together so they can continue living in their homes. Because of the age of the community’s members, the organization had arranged vaccination for its volunteers.The organization had worked with staff at a Yakima Valley Farm Workers Clinic to make appointments for about 30 people.

Then on Wednesday, Haskett got another call with more good news — the appointments had been moved up from Jan. 29 to Thursday.

Haskett and his wife traveled to Toppenish and received the vaccinations Thursday.

While he is relieved that he and his wife could get the vaccine, he’s still frustrated by the ordeal.

“It’s not all that straightforward,” he said.