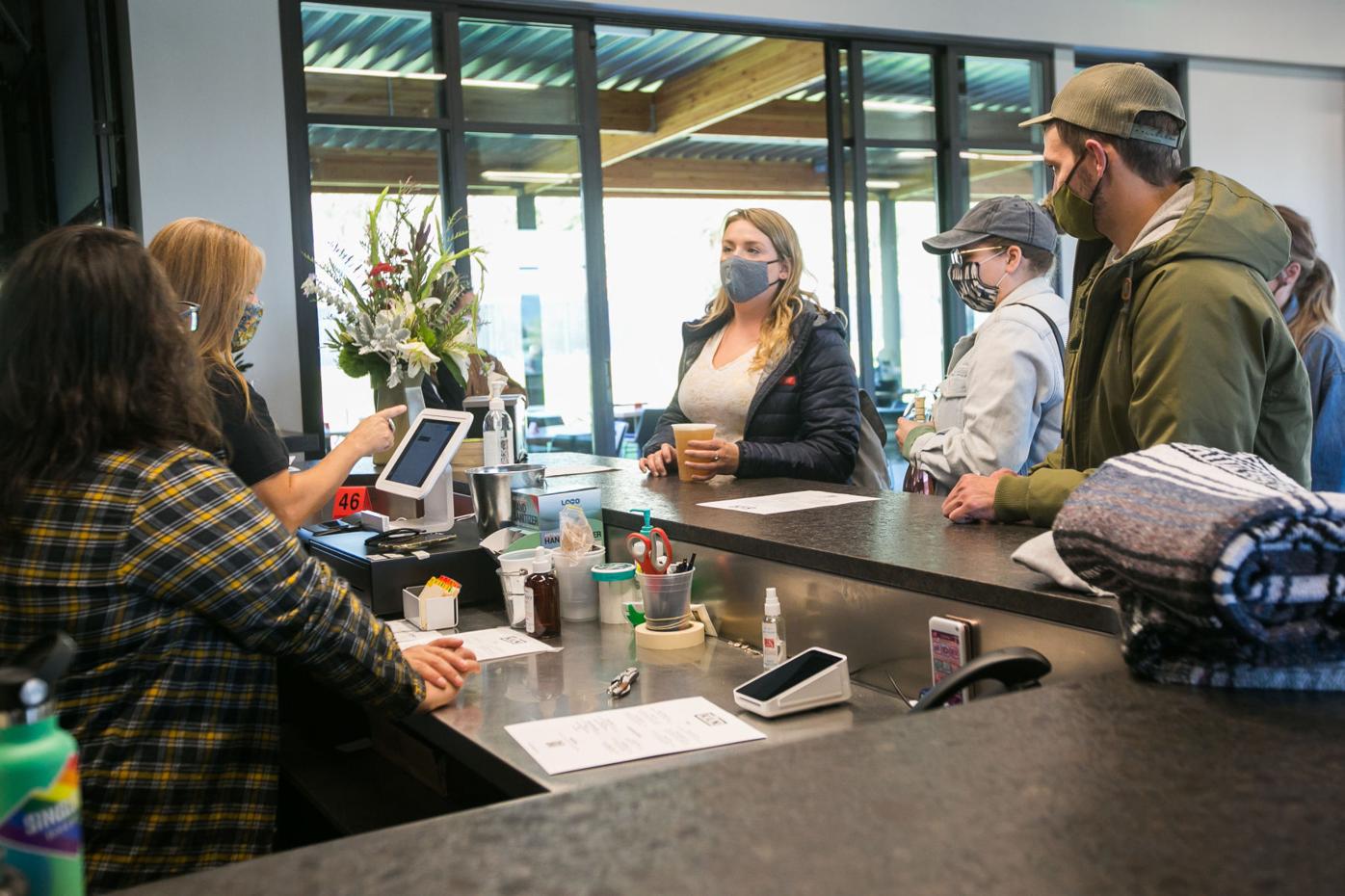 Janelle Smith, center, orders a craft beer at The Kiln in Yakima, Wash., Tuesday, Oct. 13, 2020. Gov. Jay Inslee announced Tuesday that Yakima County and the four other counties still in a modified Phase 1 — Franklin, Benton, Douglas and Chelan — can join 17 other counties in Phase 2. 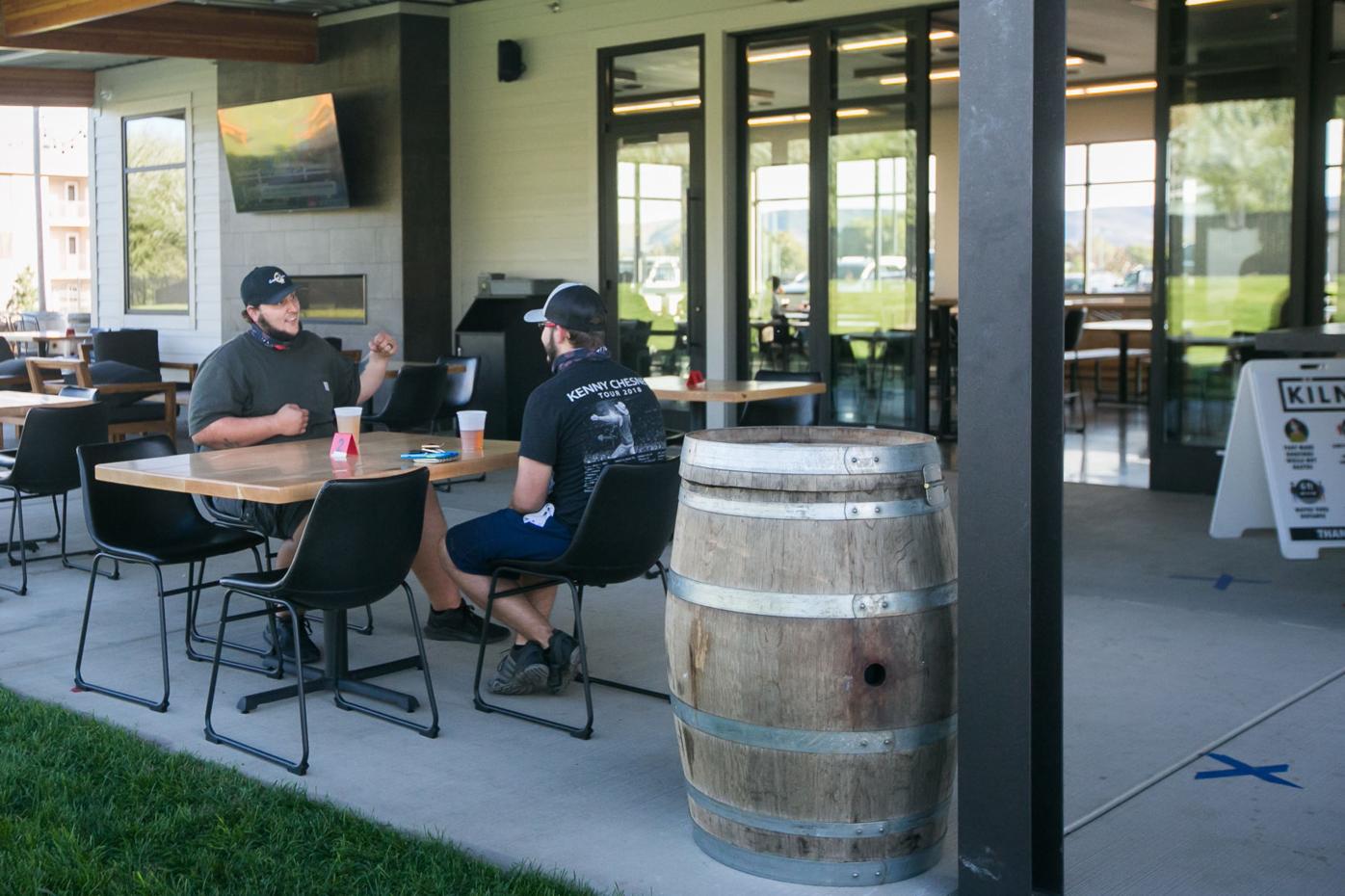 Cooper Mallone, left, and Griffin Mallone sit on the outdoor patio at The Kiln in Yakima, Wash,. Tuesday, Oct. 13, 2020. 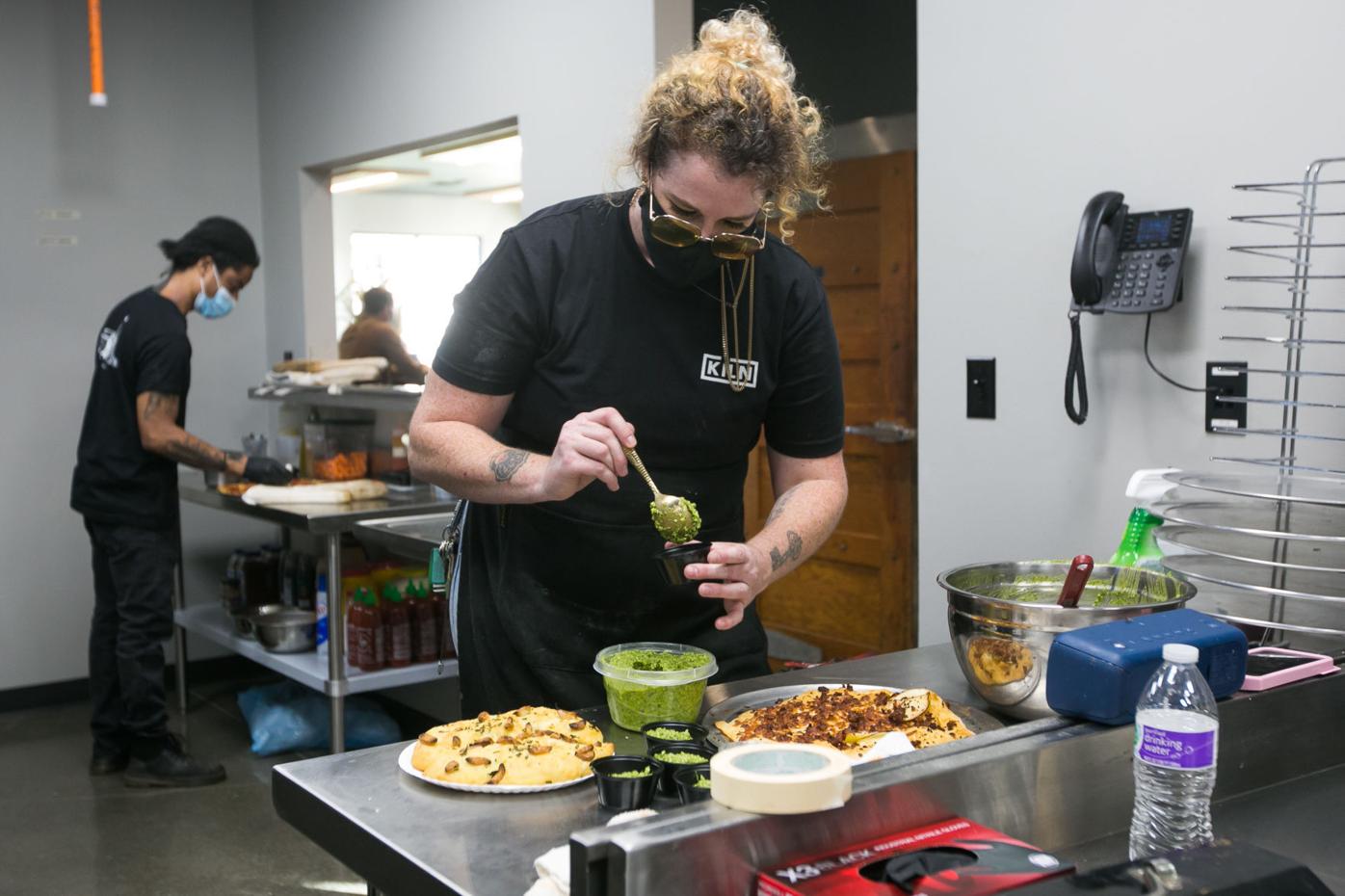 Claire Calvert, an employee at The Kiln, prepares a meal in the taproom’s kitchen Tuesday, Oct. 13, 2020, in Yakima, Wash. 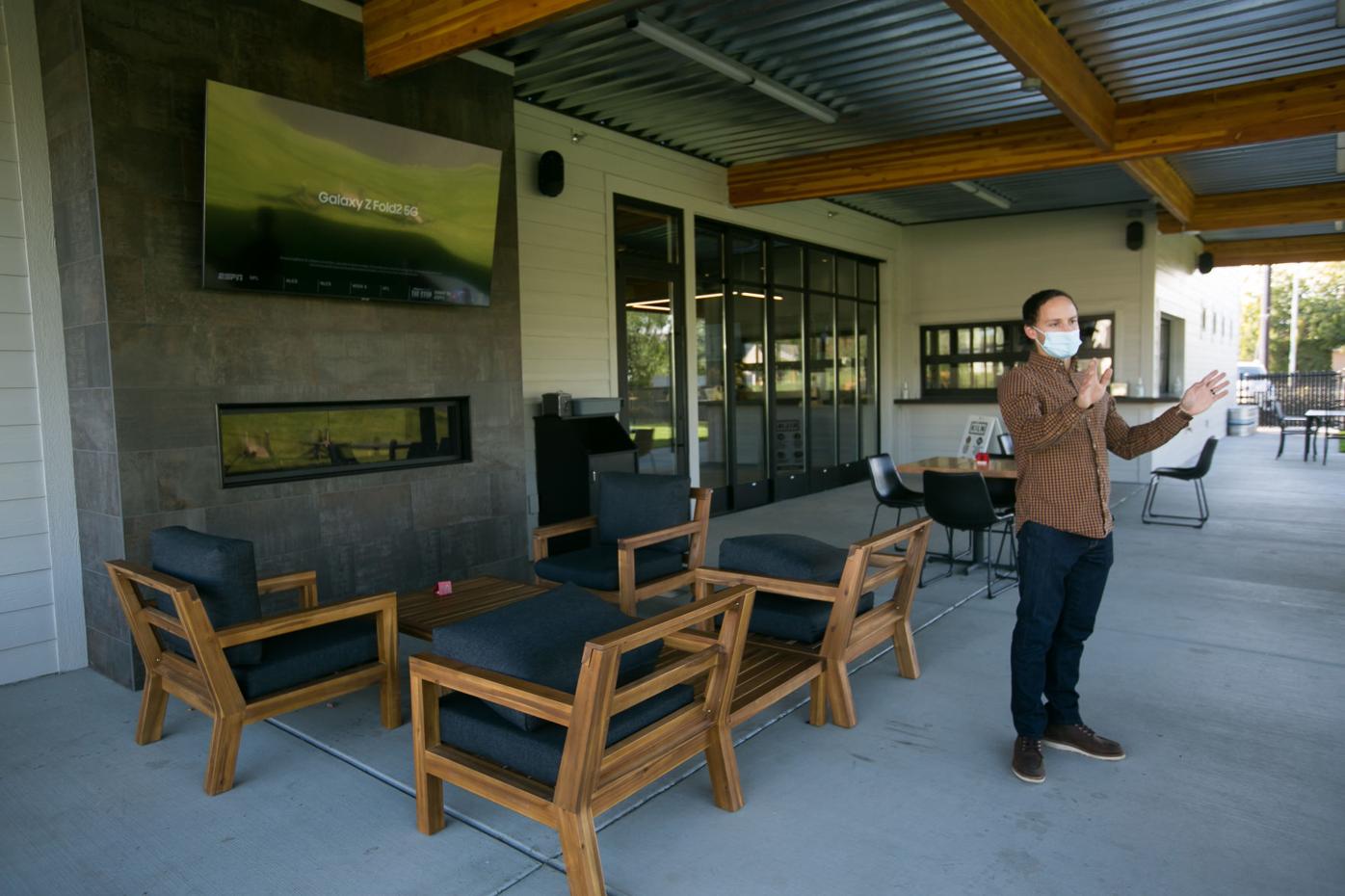 Janelle Smith, center, orders a craft beer at The Kiln in Yakima, Wash., Tuesday, Oct. 13, 2020. Gov. Jay Inslee announced Tuesday that Yakima County and the four other counties still in a modified Phase 1 — Franklin, Benton, Douglas and Chelan — can join 17 other counties in Phase 2.

Cooper Mallone, left, and Griffin Mallone sit on the outdoor patio at The Kiln in Yakima, Wash,. Tuesday, Oct. 13, 2020.

Claire Calvert, an employee at The Kiln, prepares a meal in the taproom’s kitchen Tuesday, Oct. 13, 2020, in Yakima, Wash.

In a long-awaited announcement, Gov. Jay Inslee said Yakima County and the four other counties still in a modified Phase 1 — Franklin, Benton, Douglas and Chelan — can join 17 other counties in Phase 2.

Although the five counties had already adopted Phase 2 guidance in some areas, the change will permit more activities and allow many businesses to welcome more customers.

The decision allows movie theaters, museums and libraries to open at 25% capacity. Restaurants and bars will be able to increase their indoor capacity to 50%, and indoor religious services are allowed at 25% capacity.

The state paused counties advancing in the four-stage Safe Start plan three months ago, and that pause remains in place elsewhere in the state.

Inslee said there has been a leveling off in COVID risk among the five counties and the rest of the state since the pause took effect in July.

“The COVID risk was off the charts for these counties last summer and they got it down because the majority of the residents in those counties are doing the right thing to get these numbers down,” Inslee said. “We want to give kudos to local leadership.”

New cases in Yakima County peaked in early June when rates were at 753 per 100,000 over two weeks. COVID-19 hospitalizations have come down since this summer, as has the percentage of COVID-19 tests coming back positive.

County Commissioner Vicki Baker said in a news release she’s been working with commissioners from other Phase 1 counties to move forward and obtain clearance for certain activities from state health officials, and they’ve been slowly chipping away to add new activities.

“Every time we have added a new activity, we have done so safely,” she wrote in a statement. “We are ready for Phase 2.”

In an interview Tuesday, she said the public contacted the governor’s office “in big numbers,” and helped make the community’s case to progress in the next phase in the state’s reopening plan.

“People know how to take care of themselves now,” she said. “We’ve had 95% masking rates. Our businesses are highly compliant. It was long overdue, in my opinion.”

For Verlynn Best, president of the Greater Yakima Chamber of Commerce, getting to Phase 2 reflects a massive community effort.

“We continue to do the right things in Yakima,” she said. “We masked up. We followed the guidelines that have been set up.”

And those efforts need to continue, she said.

“Our job is to keep doing a good job and get to Phase 3,” she said. “We’re not taking our foot off the gas pedal until we’re open completely.”

Public health officials echoed those comments, encouraging people to continue to wear masks in public, maintain 6 feet of distance from others, wash their hands and get a flu shot.

“We are now in cold and flu season, on top of the COVID-19 pandemic,” county health officer Dr. Teresa Everson said. “It is through our community-wide effort that we can continue to open up services and ensure our kids can go back to school.”

“Twenty-five percent (indoor capacity) is difficult for any business to operate under,” said Greg Koch, co-owner of The Kiln, a West Yakima taproom that opened earlier this month. “Getting to 50% capacity makes the financial projections work quite a bit better.”

The taproom had started keeping a waitlist in recent days as it reached capacity during the first few days of business, Koch said.

“It’s great to be able to get more people in the door,” he said.

Erik, the Mercedes Kid, a Mexican restaurant in downtown Yakima that opened just days before the COVID-19 pandemic hit the Yakima Valley, has managed to stay afloat on a strong takeout business.

But owner Erik Gomez believes there are plenty of current and potential customers who miss the restaurant experience.

“They’re tired; they’re done with only to-go,” he said.

Gomez said he’s been focused on getting enough business each month to cover his expenses, which he’s managed to do. Being able to serve more people inside will be another step toward survival.

“We’re thankful for the people that shopped local that kept us afloat,” he said.

Inslee also announced the creation of the Washington Recovery Group under the Office of Financial Management. The diverse advisory group will help state agencies work together with local governments and others to address the economic recovery.

• Permitted indoor capacity at restaurants/bars/breweries/distilleries raised from 25% to 50%. Alcohol cut off extended from 10 p.m. to 11 p.m.

• Permitted capacity at weddings, receptions and funerals raised from 20% to 25%, limit remains 30 people

• Permitted capacity for indoor religious services raised from 50 to 200 people, or 25% (whichever is less). Choirs are not allowed.