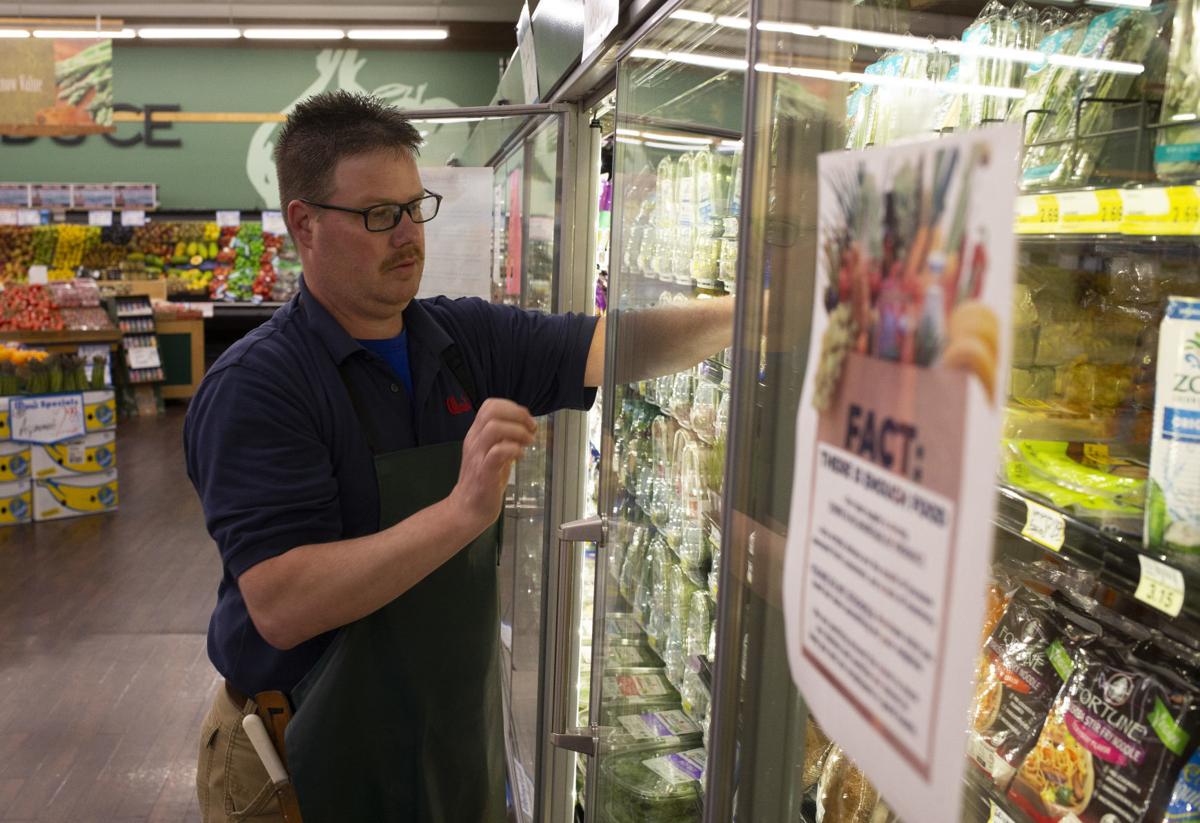 Shelby Brown, manager, stocks shelves in the produce section at Wray's Food and Drug on Thursday, April 16, 2020 in Yakima, Wash. 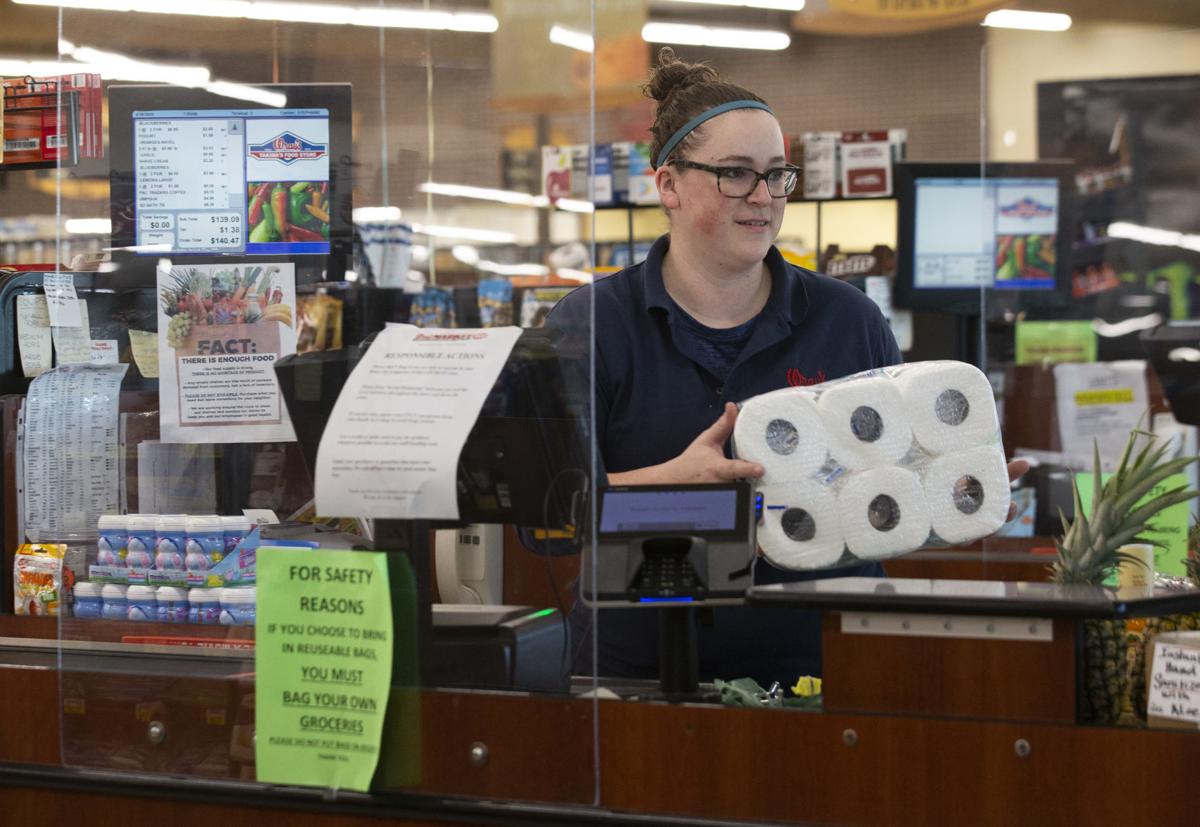 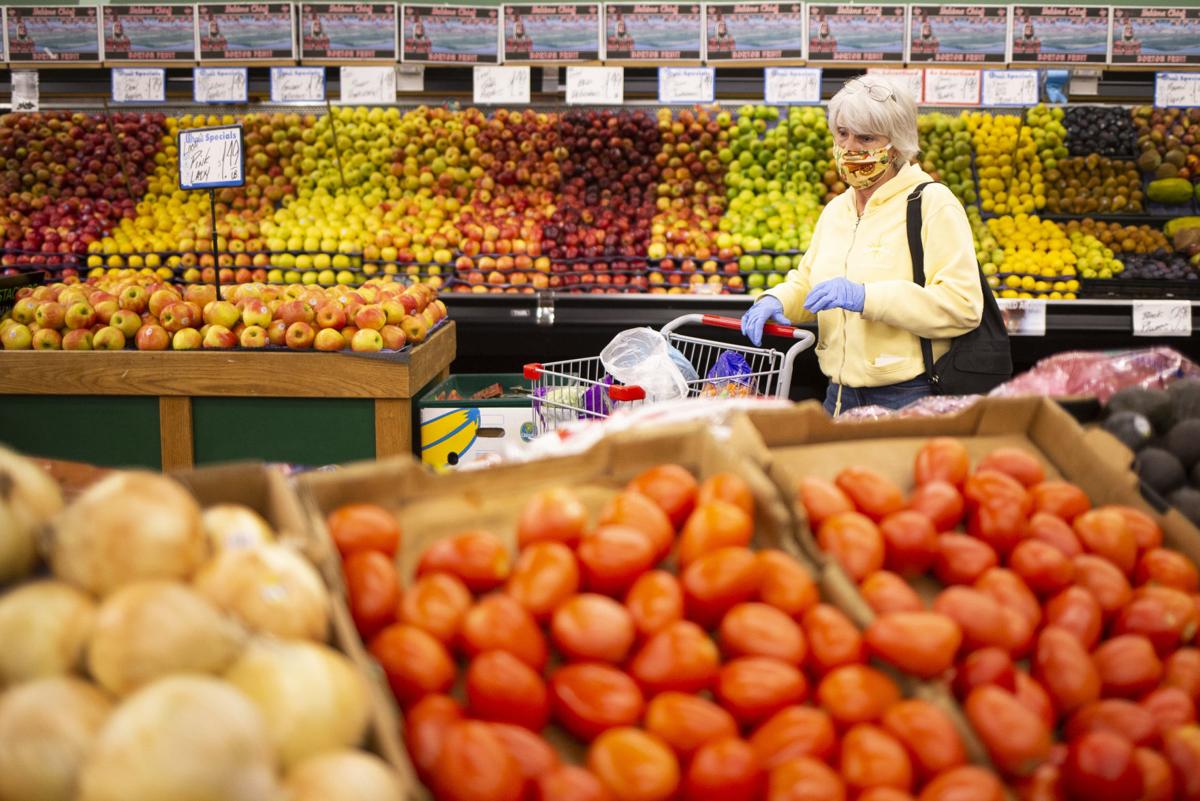 Paula Arndt shops for produce at Wray's Food and Drug on Thursday, April 16, 2020 in Yakima, Wash. 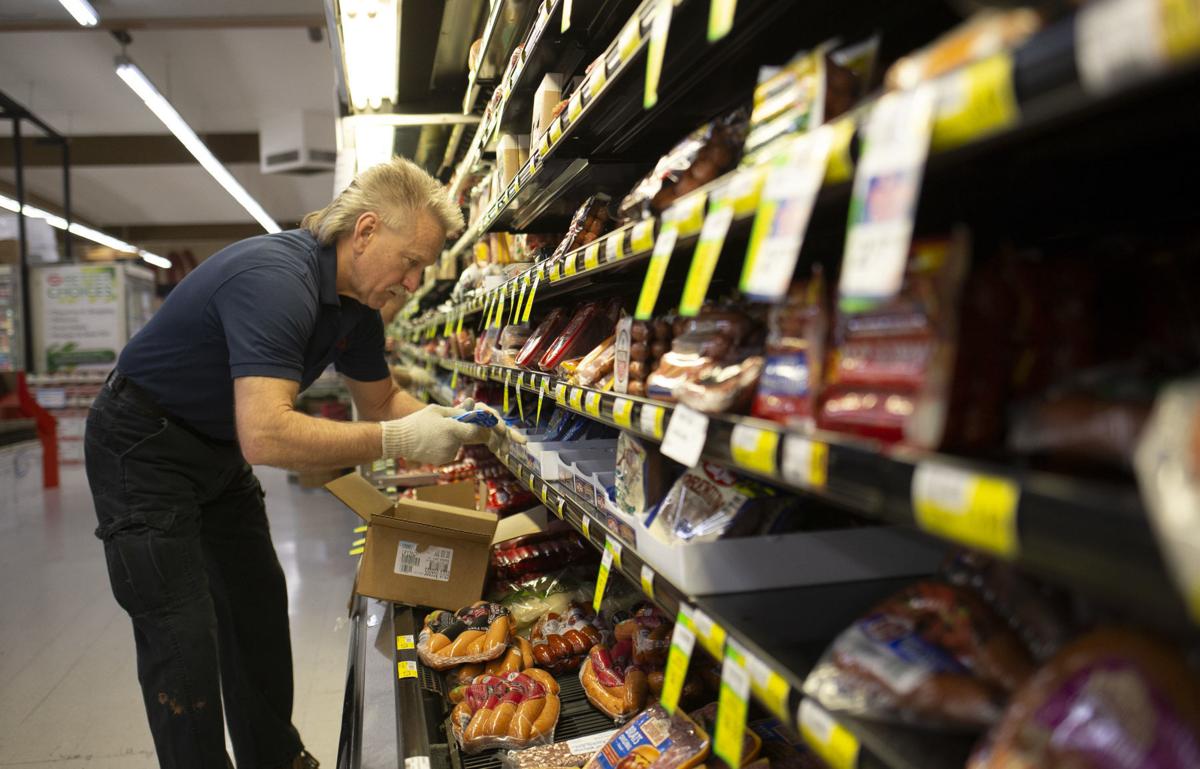 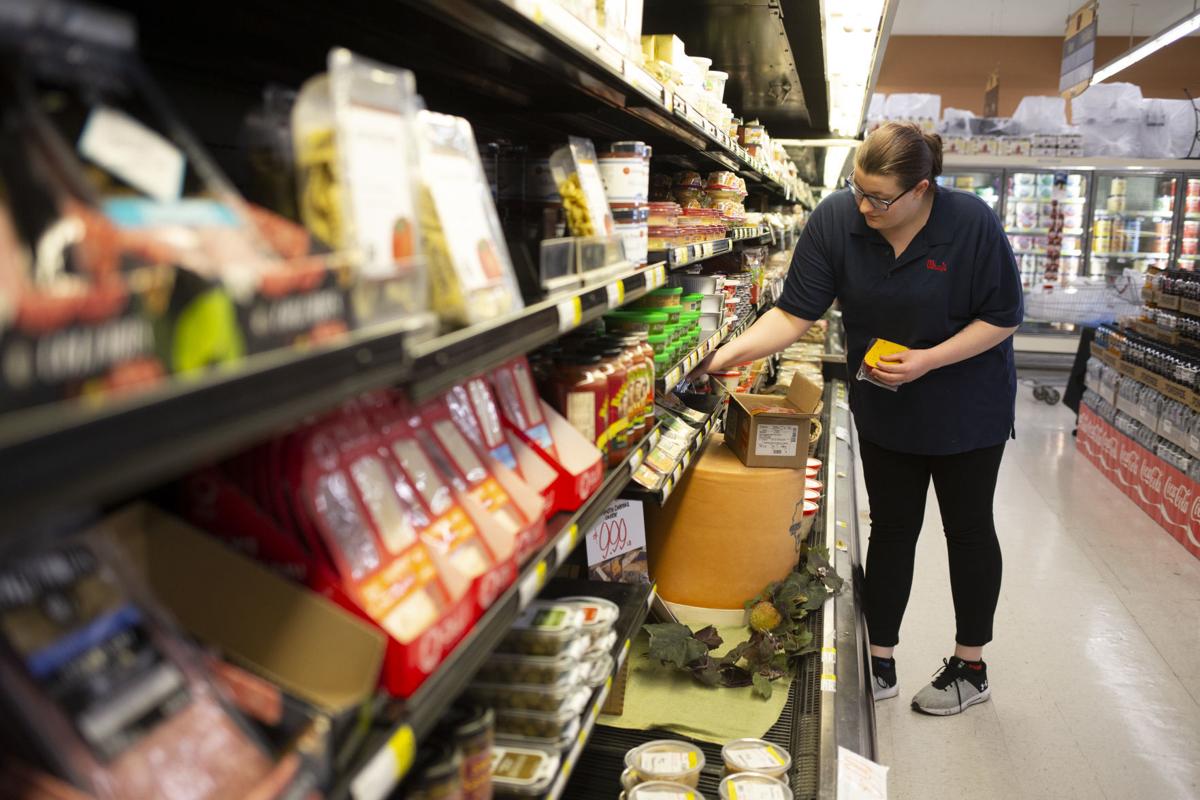 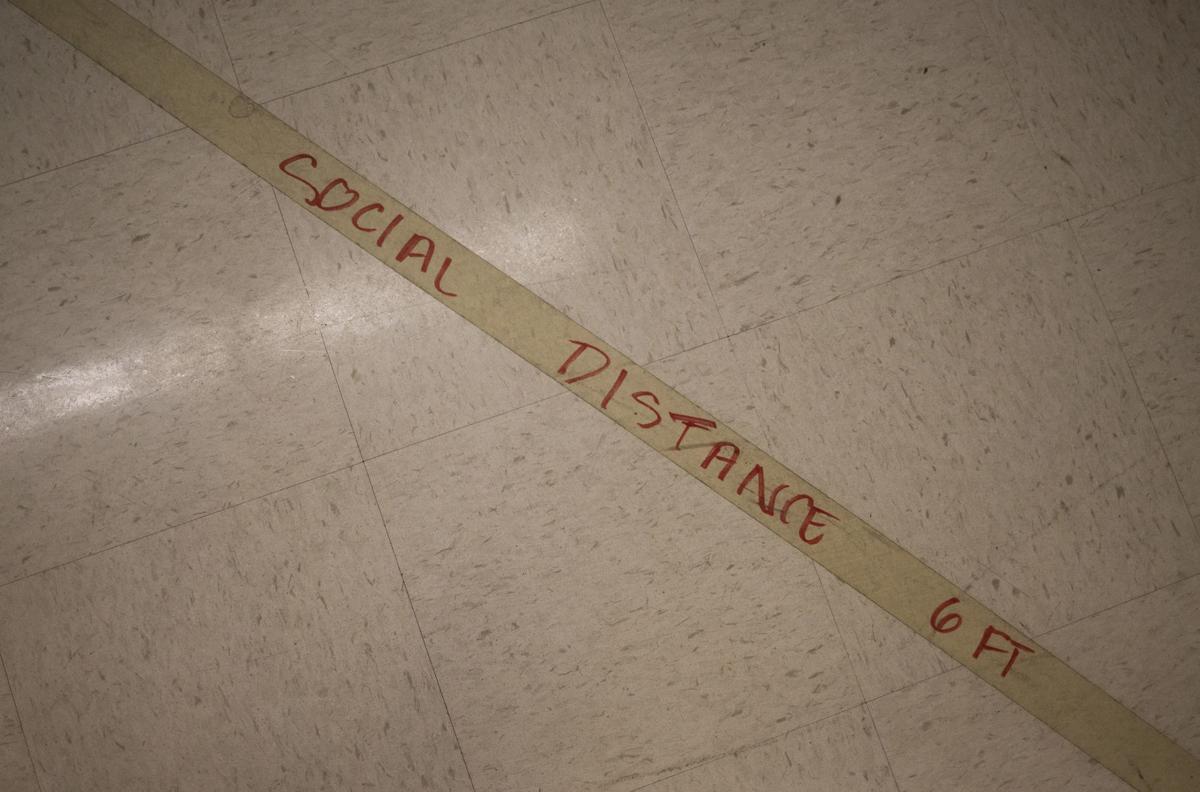 Tape marks six feet from the deli counter at Wray's Food and Drug on Thursday, April 16, 2020 in Yakima, Wash. 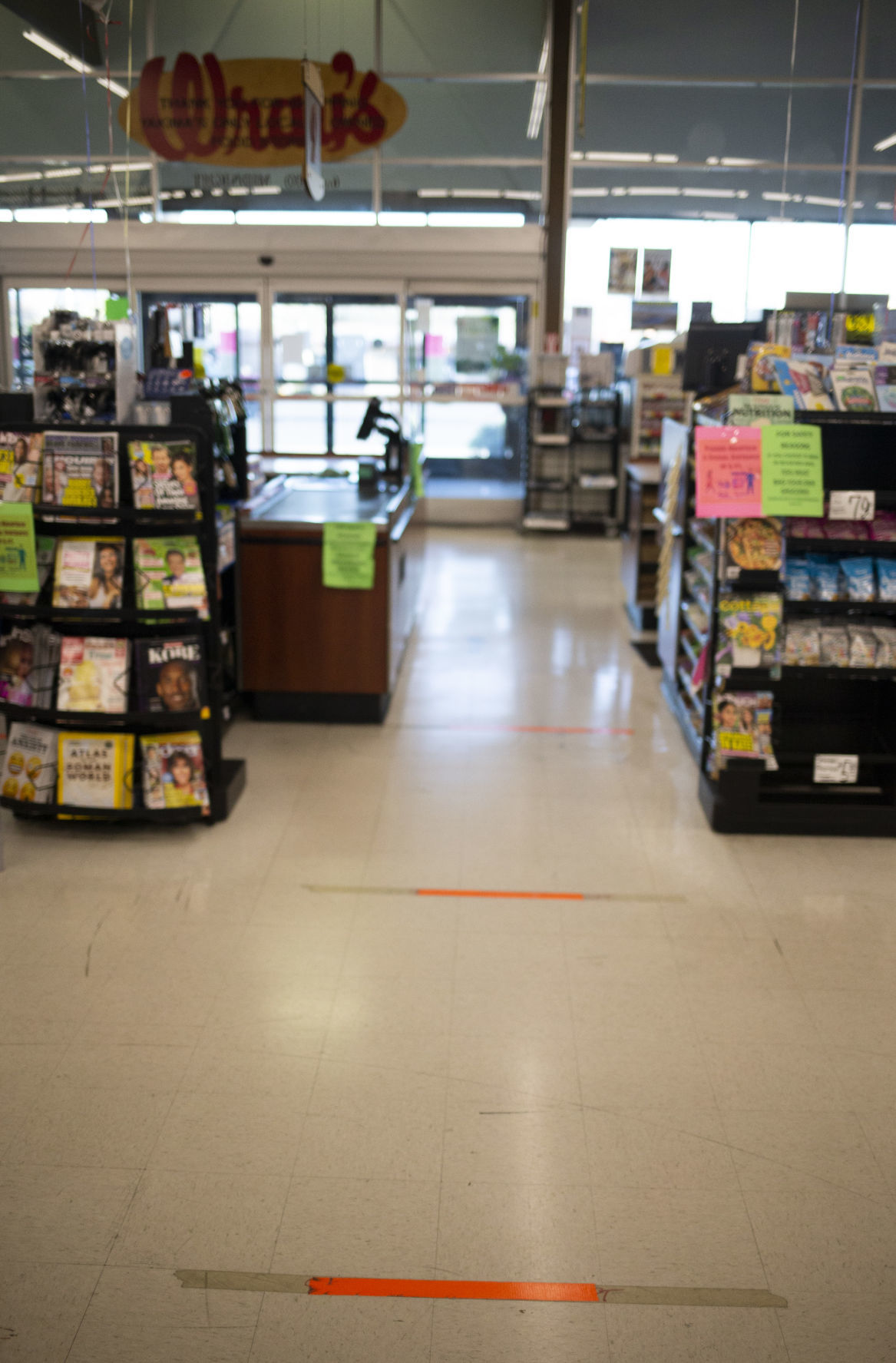 Orange tape marks six-foot gaps for customers to maintain social distance while waiting in line at Wray's Food and Drug on Thursday, April 16, 2020 in Yakima, Wash. 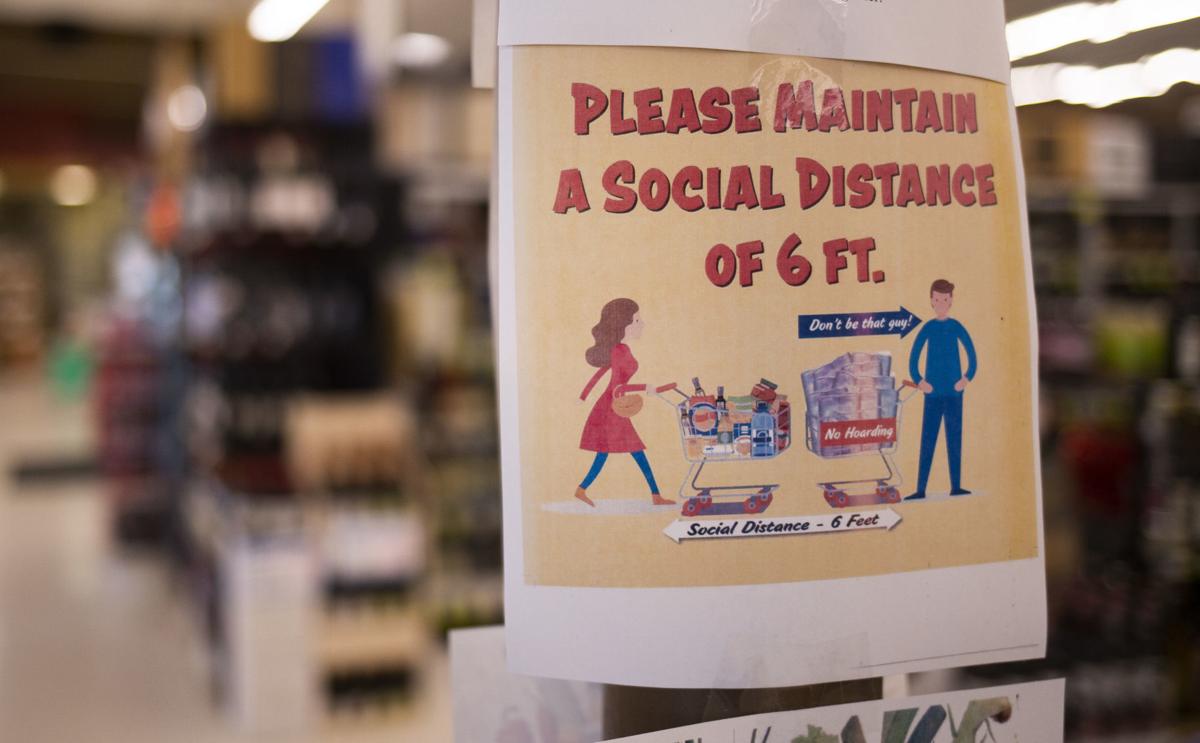 Signs asking customers to maintain social distance are posted around Wray's Food and Drug on Thursday, April 16, 2020 in Yakima, Wash.

Shelby Brown, manager, stocks shelves in the produce section at Wray's Food and Drug on Thursday, April 16, 2020 in Yakima, Wash.

Paula Arndt shops for produce at Wray's Food and Drug on Thursday, April 16, 2020 in Yakima, Wash.

Tape marks six feet from the deli counter at Wray's Food and Drug on Thursday, April 16, 2020 in Yakima, Wash.

Orange tape marks six-foot gaps for customers to maintain social distance while waiting in line at Wray's Food and Drug on Thursday, April 16, 2020 in Yakima, Wash.

Signs asking customers to maintain social distance are posted around Wray's Food and Drug on Thursday, April 16, 2020 in Yakima, Wash.

Chris Cherry remembers March 13 vividly. It was the day after the Yakima Health District announced the first two coronavirus cases in Yakima County.

Cherry, owner of the Grocery Outlet in Selah, witnessed customers crowding the store and emptying the shelves in anticipation of having to stay at home.

“They wiped the store clean in one day,” Cherry said.

More than a month later, local grocery store owners say they have been able to fine-tune their coronavirus response measures better and, more importantly, find ways to get the food that customers are seeking.

They have also implemented practices that are now standard in the retail industry: Designated hours for seniors and other high-risk customers. Marking the store to encourage customers and employees to keep at least 6 feet apart. Installing glass or other barriers to separate shoppers and employees at registers and other customer service areas. And frequent cleaning of high-touch areas, such as registers and shopping carts.

Chris Brown, owner of Wray’s Marketfresh IGA, limited the hours of its customer service lines and even closed some of its services, such as auto licensing, for a short period. Brown was able to resume services once he could install Plexiglass barriers in those areas, along with the checkout stands.

Wray’s, which has locations in Yakima and Selah, has been operating on reduced hours to allow additional time for stocking and cleaning, and has encouraged employees to wear masks. Brown said he is prepared to implement store capacity limits, when needed, to promote physical distance during peak shopping periods.

Wray’s has also benefited when other, larger big-box stores have been too crowded: “If they can’t find their social distancing in one place, they go somewhere else,” Brown said.

At the Selah Grocery Outlet, customers are now required to leave carts outside. That allows employees to take the carts and sanitize them in a designed area before putting them back into the store.

The store also has a designated group of employees who stock outside of store hours, eliminating contact with the public.

While that move has reduced the number of available employees in the store during store hours, it also ensures that the employees who are doing a critical task remained healthy.

Cherry also reduced hours — opening an hour later and closing an hour earlier — so he could make better use of the employees who work during the day. Fewer operating hours means more employee overlap and better coverage of registers.

“They’re speeding customers through their lines,” he said.

Finally, Cherry and his wife, Aubree, started using the store’s Facebook page to communicate with customers about what is in stock.

The initial mass buying during those first few days last month left the Selah Grocery Outlet without several items, including meat, for several days. When the store was finally able to restock its meat, they shared the news on Facebook.

Cherry credits social media for helping reduce crowds at the store but help connect with customers during a tough time.

“They’re coming to us when they need (food),” he said. “They’re not just coming in every single day and walking the store and coming out with nothing. It also helped us target what people are looking for.”

In general, grocery store owners say food availability has improved. The store is continuing to get major food deliveries twice a week and smaller deliveries of some products, such as bread and beverages, daily, said Brown of Wray’s Marketfresh IGA.

Some items are harder to come by than others, but the store has been able to restock most items, Brown said.

“We might not have the pasta you want, but you’ll have pasta,” Brown said. “It’s not as bad as it was a couple of weeks ago.”

For the Selah Grocery Outlet, there’s an element of business as usual, as the brand’s model has been to buy whatever is available to ensure low prices. It’s been tough to do that with some products — think toilet paper — but it’s been able to source most products through its typical buying process.

“We just switch brands; we get whatever we can,” he said. “We have been getting some restaurant packaging (for some food items).”

Wray’s Marketfresh IGA was able to procure a supply of dried pinto beans, a popular item, by teaming up with another small grocery chain as well as a local Latino food distributor.

When Mercado Latino II, a Yakima grocery store, ran out of tomatillos last week, it was able to order more through URM Cash and Carry, a food service store that typically sells in bulk to restaurants.

“They really came through,” said Harleen Kaur, whose family owns the store.

Kaur said it’s gotten to the point that certain products have been available for lower prices, and the store has been able to pass those savings to customers. For example, a pound of tomatoes now costs $1.29 a pound compared to $1.99 a pound a few weeks ago.

The store also wants to help the community. A few weeks ago, it set up an area with food and drinks and made it available to anyone free of charge.

The store also can donate any food that it can no longer sell.

“Our doors are always open,” she said. “We don’t want anyone to go to sleep hungry.”