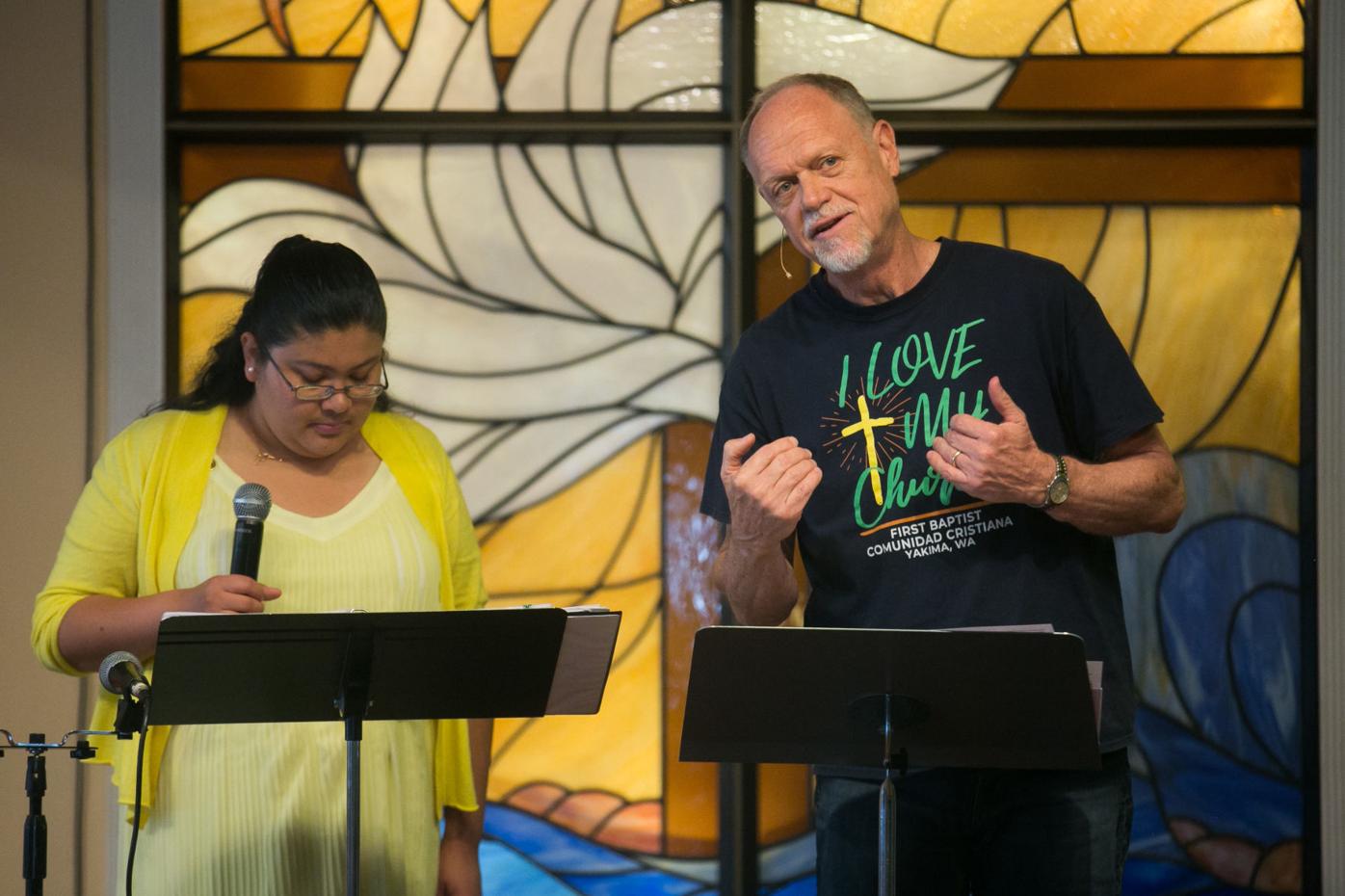 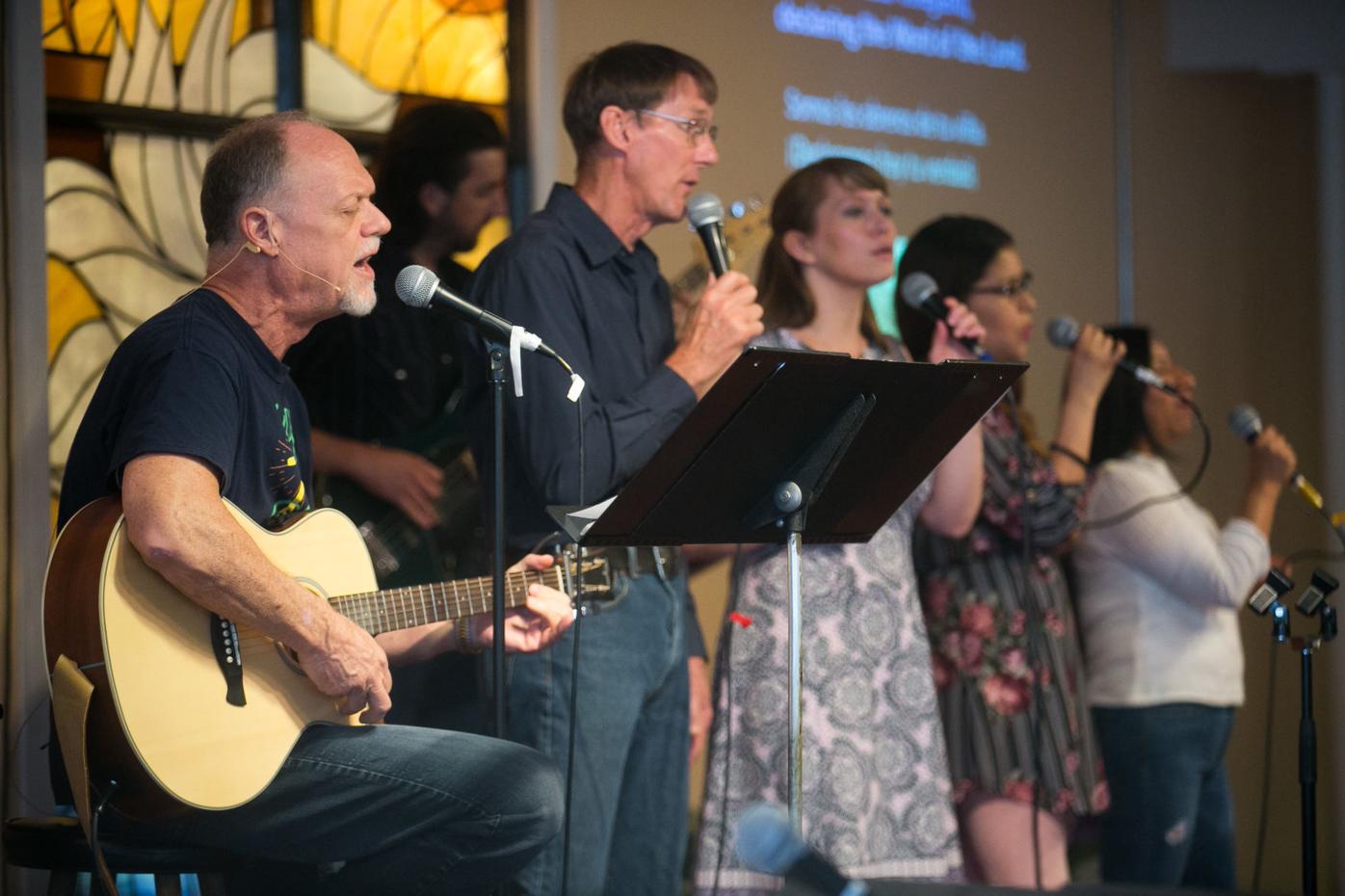 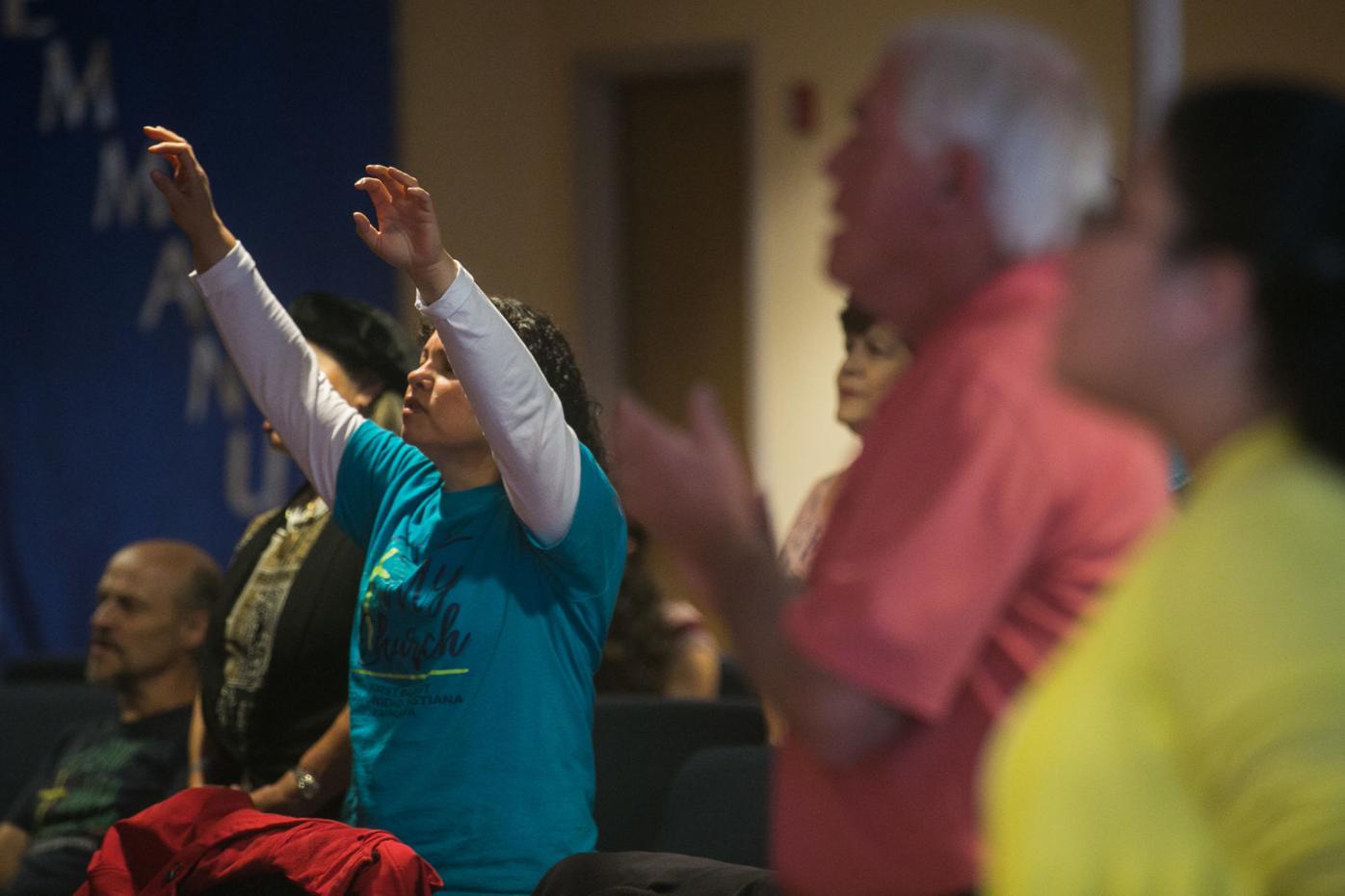 Anita Beadle sings during worship Sunday, May 31, 2020, at First Baptist Church of Yakima in Yakima, Wash. 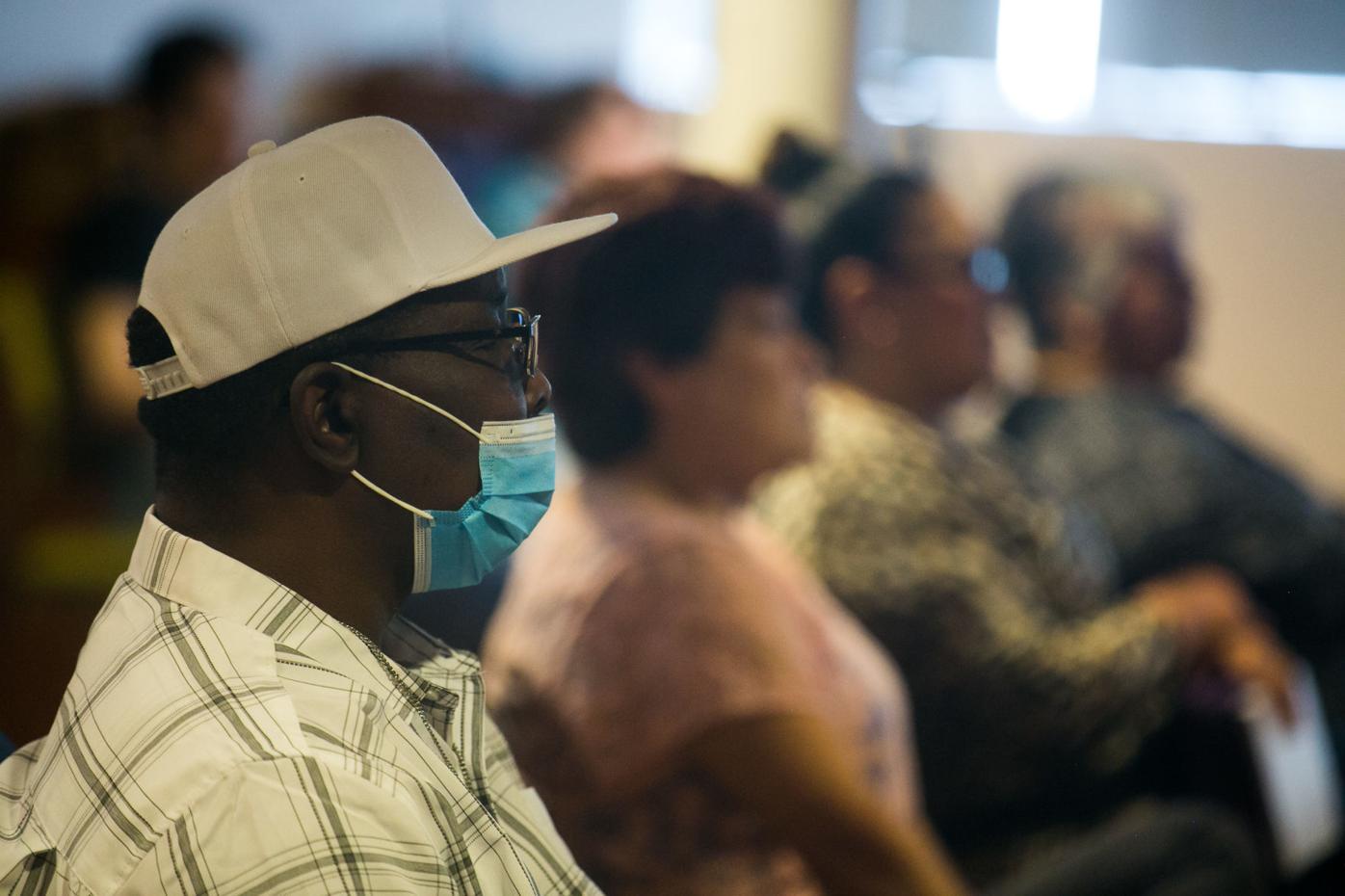 Alex Lewis dons a mask as he listens to Pastor Andy Ferguson’s sermon Sunday, May 31, 2020, at First Baptist Church of Yakima in Yakima, Wash. 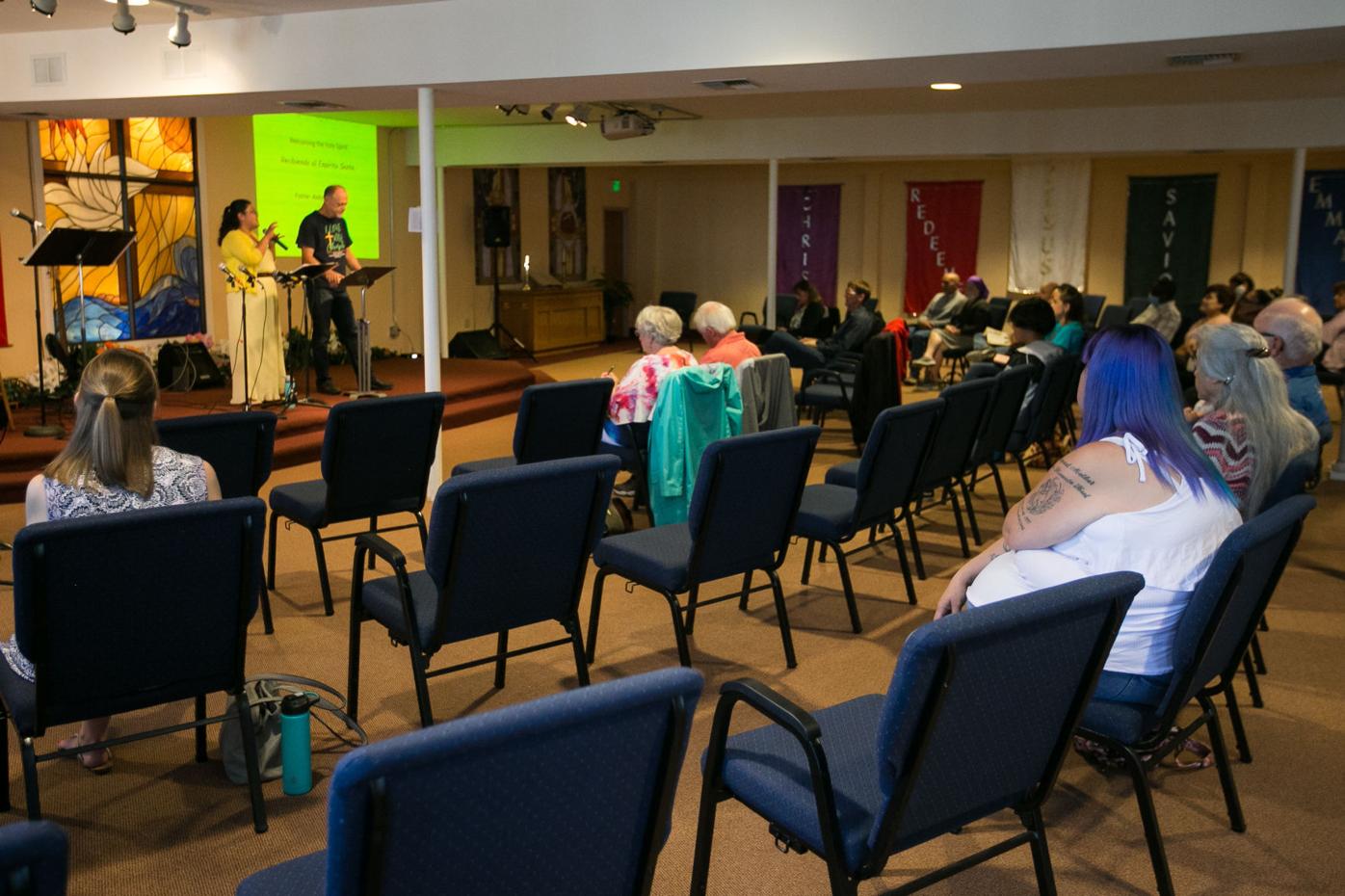 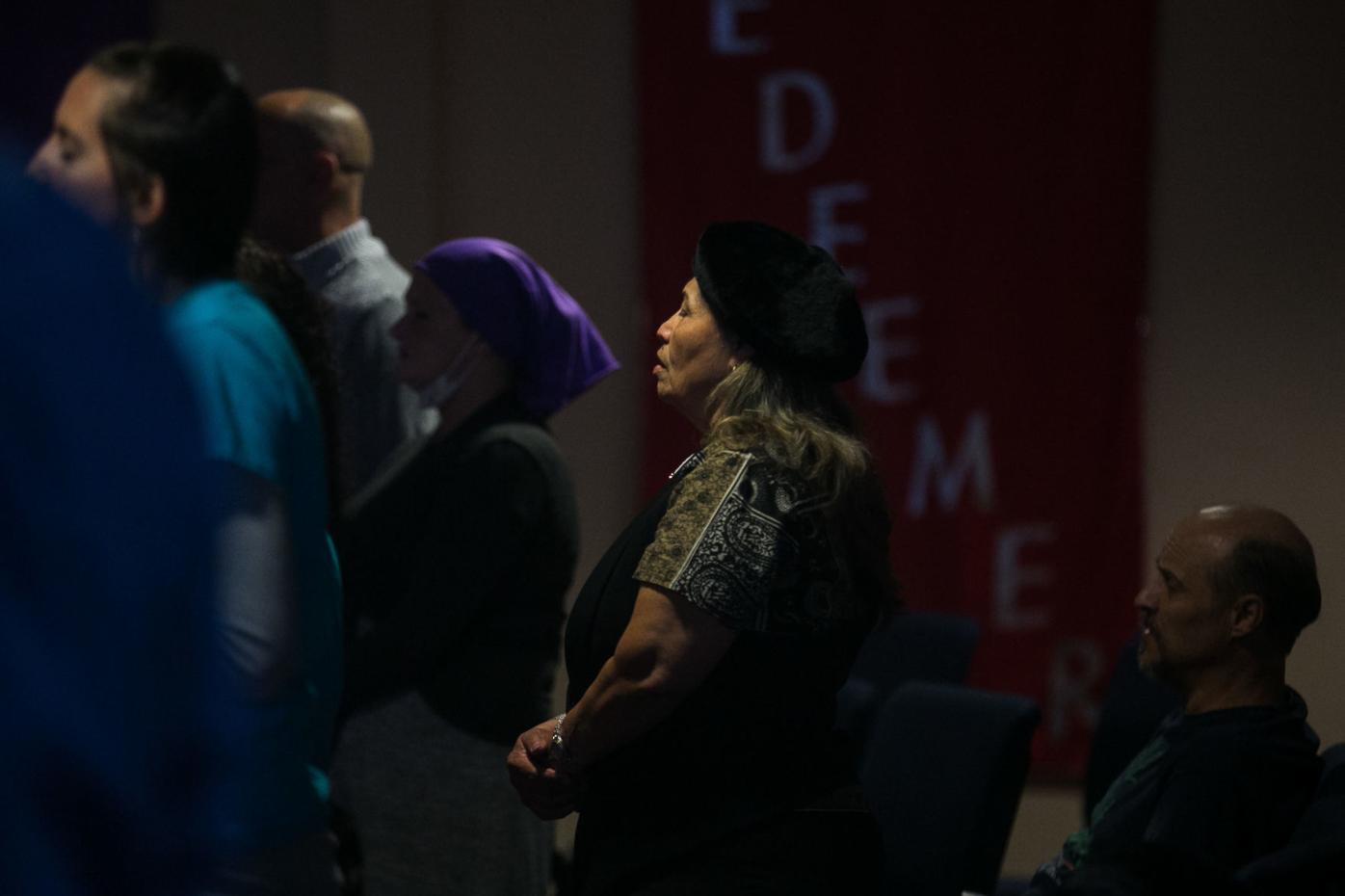 A church attendee sings during worship Sunday, May 31, 2020, at First Baptist Church of Yakima in Yakima, Wash. 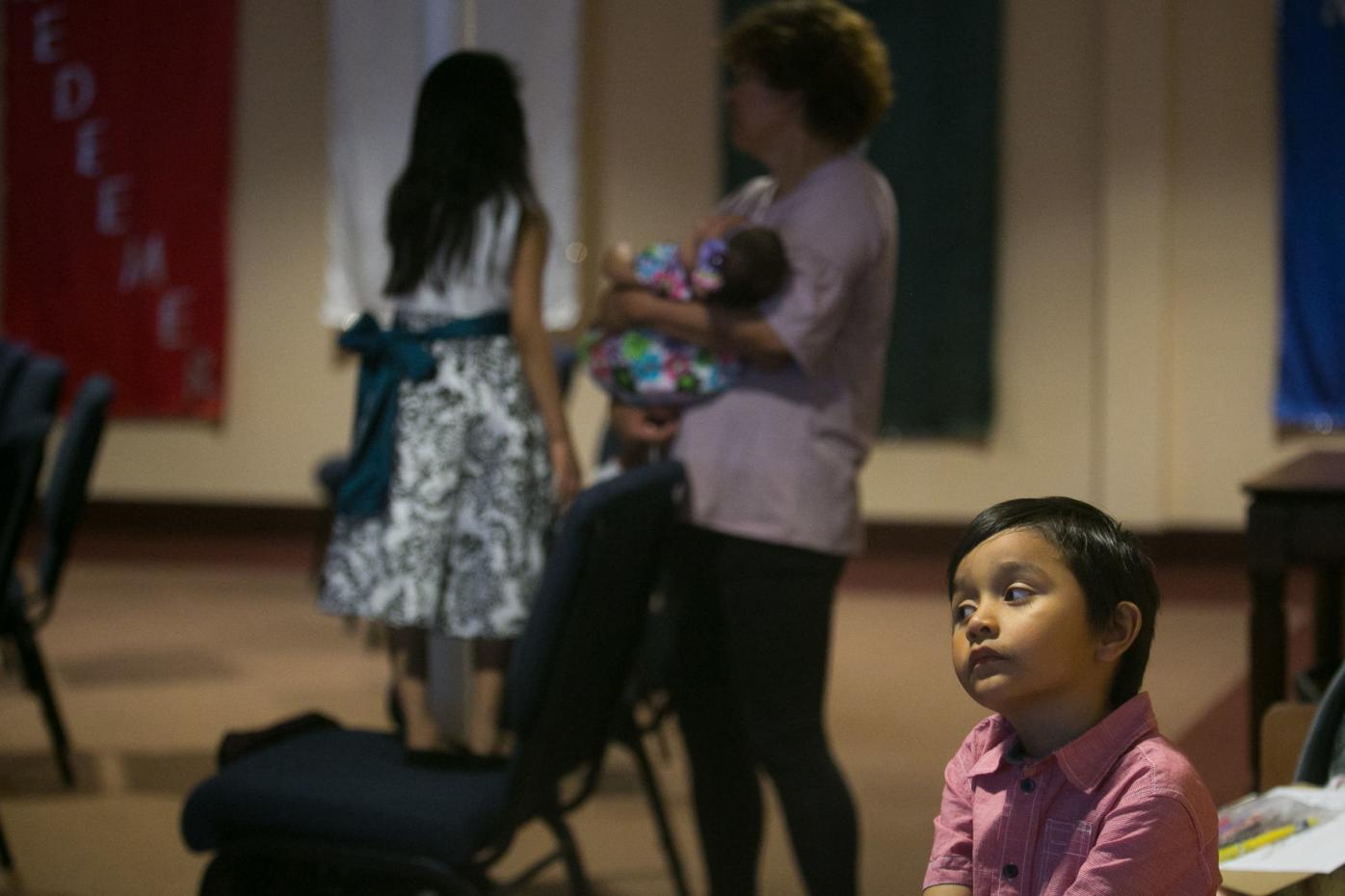 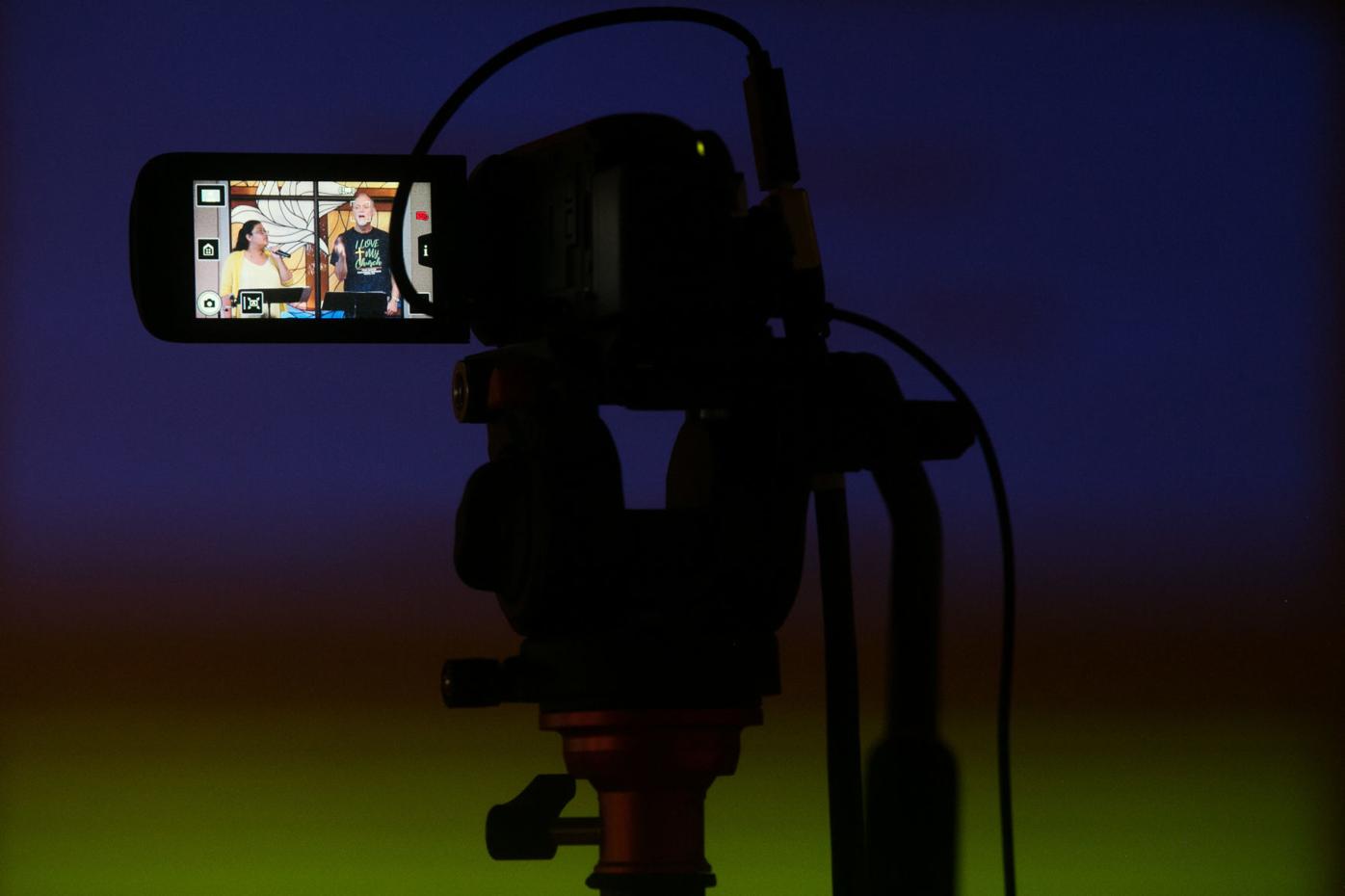 A camcorder records Pastor Andy Ferguson’s sermon for those who chose to stay home Sunday, May 31, 2020, at First Baptist Church of Yakima in Yakima, Wash. 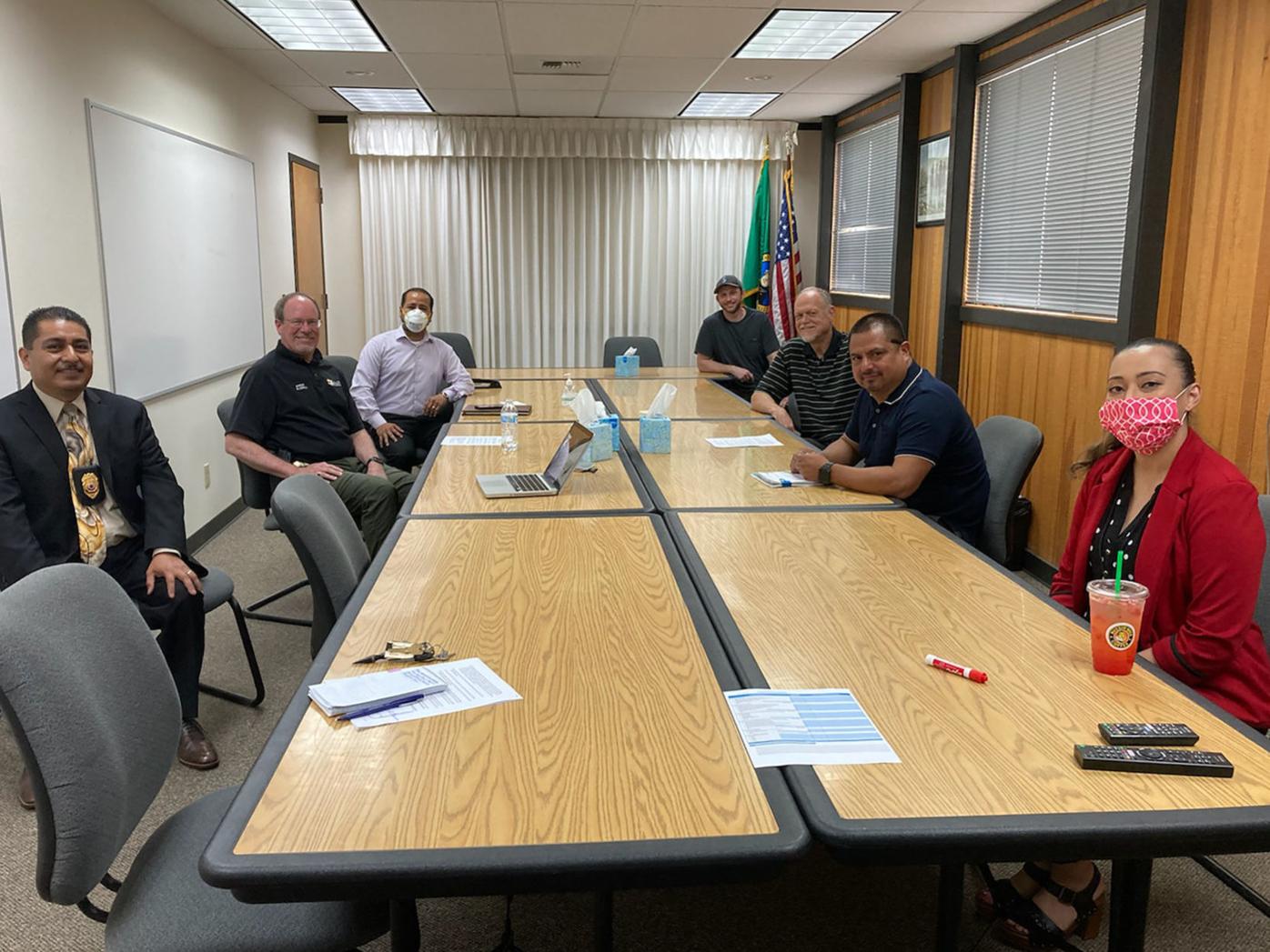 Anita Beadle sings during worship Sunday, May 31, 2020, at First Baptist Church of Yakima in Yakima, Wash.

Alex Lewis dons a mask as he listens to Pastor Andy Ferguson’s sermon Sunday, May 31, 2020, at First Baptist Church of Yakima in Yakima, Wash.

A church attendee sings during worship Sunday, May 31, 2020, at First Baptist Church of Yakima in Yakima, Wash.

A camcorder records Pastor Andy Ferguson’s sermon for those who chose to stay home Sunday, May 31, 2020, at First Baptist Church of Yakima in Yakima, Wash.

Sunday was the first day Gov. Jay Inslee permitted churches to reopen for worshipers since issuing his COVID-19 stay-at-home order in March.

The governor’s declaration came with restrictions, including that counties still in Phase 1 could only have outdoor services and that congregants needed to wear face coverings at all times. Many churches in Yakima County, which has the state’s highest rate of COVID-19 infection at about 1,242 per 100,000 as of May 27, opted to continue virtual services for congregations.

But a few, including the First Baptist Comunidad Cristiana of Yakima, joyfully opened their doors and welcomed back their congregations. About 30 people gathered inside the church on North Pierce Avenue for the Sunday morning service, which was conducted intermittently in English and Spanish.

The service, which stretched for more than two hours, included prayers for healing, singing and a celebration of Pentecost, the descent of the Holy Spirit on the disciples of Jesus.

The Rev. Andy Ferguson said he was excited that the congregation could come together, in person, for the first time in more than two months. He told congregants that gathering together allowed them to be encouraged and filled up with the Holy Spirit. But gathering also was an exercise of their constitutional rights, including the First Amendment rights to freedom of religion and peaceful assembly, and a statement of the autonomy of the church, Ferguson said.

“The kingdom of God is separate from civil government, and no matter how despotic, that government cannot control the church,” he said. “In our country we have a Constitution that provides for and protects the separation of church and state. This separation and our rights thereby must be protected at all costs against the overreaching attempts to control by any civil authority.

A bottle of hand sanitizer and a box of masks — with a note saying they were optional — sat on a desk near the entrance of the church. Some congregants sat close together for the service, with chairs about a foot apart. Of the 30 people gathered indoors, only two wore masks. They took them off after Ferguson started to preach.

Meanwhile, the Rev. Jorge Huerta, head of the Hispanic Alliance of Pastors from the Yakima Valley and a pastor at Iglesia El Calvario in Sunnyside, continued alternate church services. Huerta said he wants more time to monitor the spread of the new coronavirus throughout the Lower Valley and to research and implement recommendations for reopening as safely as possible.

“I think we need to get ready, to get prepared, to study and have more resources,” Huerta said.

The Friday before church services were allowed to resume, Huerta and six others, including Ferguson, Yakima County Sheriff Robert Udell, other pastors, and Erika Ochoa, a community health specialist with the Yakima Health District, gathered at the sheriff’s office for a discussion about what is permitted under Inslee’s declaration that religious organizations could reopen.

Yakima, given its high COVID-19 case counts and stretched health care capacity, is still in Phase 1 of the governor’s reopening plan. Ochoa said counties still in Phase 1 could only hold outdoor services on the organization’s property with up to 100 individuals, excluding organizational staff.

Only counties approved for Phase 2 are supposed to hold indoor services, and then only with up to 25% capacity or 50 individuals, whichever is less, Ochoa said.

Ochoa outlined additional requirements, regardless of the phase, including maintaining 6 feet of social distancing between people at all times, providing personal protective equipment such as gloves and masks, and ensuring all people wear face coverings for the duration of the service, including singing.

Religious organizations also are required to have information about COVID-19 safety precautions posted and to not allow direct physical contact between worshipers.

In addition to those requirements, Ochoa said the state strongly recommends that all organizations keep a list of attendees, so that close contacts could be notified in the event of an exposure.

Eight other pastors, including from Florida and Oklahoma, virtually attended the meeting, which Huerta said he called because “pastors have questions.”

One of the first questions Huerta asked was whether pastors could be charged with a crime if they violated the governor’s requirements. He also asked whether an individual who possibly caught COVID-19 at a church service could sue the church, and whether the health district or the sheriff’s office could shut down a church violating the state’s orders.

Udell said Washington law allows for a gross misdemeanor for violations, but he added that no one in the state has been charged with a crime for violating the governor’s orders. Udell said pastors could be sued — “In this country, you can sue anyone for anything,” he said — but anticipated the likelihood was low.

Ochoa said the health district did not have the authority to enforce the state’s orders. Udell said his deputies and Yakima police officers would not be arresting people for attending church services.

“No law enforcement around the state is going to close down a church. Churches are a foundation of our society,” Udell said. “You will not see a deputy or an officer coming to your church. It will not happen.”

Huerta said that he and several other pastors had heard from congregants who said that God would protect them from COVID-19 or could heal them from the illness, and who questioned some churches’ hesitation to reopen. Huerta asked if the other pastors on the call had fielded those “where is your faith?” concerns.

“It is very important to remember what the Scriptures say about faith,” Avila said. “Scriptures say ‘Cuidar a las personas.’ Take care of your people.”

Avila said he had been in contact with a church where 21 people became infected with COVID-19 through one church service. Hilario Garza, superintendent of the Northwest Hispanic District, said one of his church’s pastors had recently died from COVID-19.

Garza said the stance of his church is to follow the recommendations of the Centers for Disease Control and Prevention and local health authorities.

“It will not affect the majority,” Garza said. “But it is a reality for us.”

Avila repeated that taking precautions does not mean pastors do not have faith.

“Taking care of people does not mean that you are not faithful,” he said. “We can have faith and at the same time, abide by the recommendations.”

The Catholic Diocese of Yakima covers counties still in Phase 1, like Yakima, as well as those that have become eligible for Phase 2, such as Kittitas and Grant counties. The diocese’s reach encompasses 40 parishes and missions within seven Central Washington Counties and 180,000 Catholics, of which 72% are Hispanic. Priests also serve more than 60,000 migrant workers during the summer harvest season.

Bishop Joseph Tyson said he participated in numerous Zoom and phone conferences with priests before the diocese decided to submit a statewide plan to the governor. Prior to reopening for worship, each parish pastor also will have to submit a compliance plan before Tyson authorizes any service, indoor or outdoor.

That plan allows each priest to determine when, and at what pace, the church will reopen, Tyson said.

Tyson said one of the diocese’s churches, St. Andrew’s in Ellensburg, opened Sunday for the Feast of the Pentecost after sending in the required parish compliance information. But many Catholic churches are continuing to livestream daily Masses through Facebook, YouTube, Zoom, Skype and parish websites. Tyson also has televised services, in English and Spanish, for those who don’t have access to the internet or social media.

“Few were able to open up this Sunday of Pentecost,” Tyson said. “Many will have outdoor Masses starting next Sunday on Trinity Sunday.”

Tyson added the outdoor services allow for more people as well as better air circulation, which could minimize the risk of COVID-19 infections. The disease is real for the diocese, given that one of their priests in Mattawa, the Rev. Alex Trejo, became the first priest in the United States to contract COVID-19, Tyson said.

“Most important is prayer. Even if we cannot come together, we can still be ‘church’ through prayer,” he said. “We need to pray to seek God’s guidance as we undertake reopening.”

Huerta said he received a message from God about two weeks ago, in which he was told to take the steps recommended by the authorities.

“The Bible says in the book of Romans to submit to authorities,” he said. “It is possible to be so focused on preventing the virus that I can forget about the God who heals, but the message was that it is about having a balance.”

Huerta has been preaching on Radio KDNA. Even then, he wears a mask. He said he also won’t mind preaching to people from behind a mask if it means minimizing risks of exposure to COVID-19 for his congregants. But what will be challenging for Huerta is the governor’s directive that religious services for counties in Phase 1 have to take place outside.

“It could be difficult to move a congregation, and the church equipment, outside, especially during the summer,” Huerta said. “My concern would be that it’s getting hot.”

Ferguson acknowledged in his Sunday sermon that First Baptist Comunidad Cristiana Church services would look different because of the pandemic but said congregants did not have to fear because God was still in charge. He made references throughout the sermon to members of the congregation who had decided to stay home and watch via the church’s Facebook Live, a decision Ferguson did not disparage.

Ochoa said the Yakima Health District has several recorded videos and public service announcements that churches can show at the beginning of church services, in English and Spanish, to share information about the new coronavirus and precautions, at yakimatogether.org.

Fliers also are available for posting, in English and Spanish, Ochoa said.

Tyson said a generous grant and the diocese’s own donations have funded the website Formed.org, which hosts more than 200 films, Bible studies, music and book recommendations, in both English and Spanish.

The site is not just for Catholics, he added. The resource exists to provide connection to anyone, including those who stay home as a precaution for their safety or the well-being of others.

“I continue to suspend the Sunday obligation for attending Mass because I want to make sure that our folks are making the best decision given their age and any underlying health conditions,” he said. “We do not want people coming in with sickness, and we do not want to expose our more vulnerable folks to any contagion.”