Free access for current print subscribers
Get Started
You are the owner of this article.
Edit Article Add New Article
You have permission to edit this article.
Edit
Home
News
Bottom Line
Sports
SCENE
Photos & Video
Opinion
Obituaries
Unleashed
Classifieds
The Vanished
1 of 4 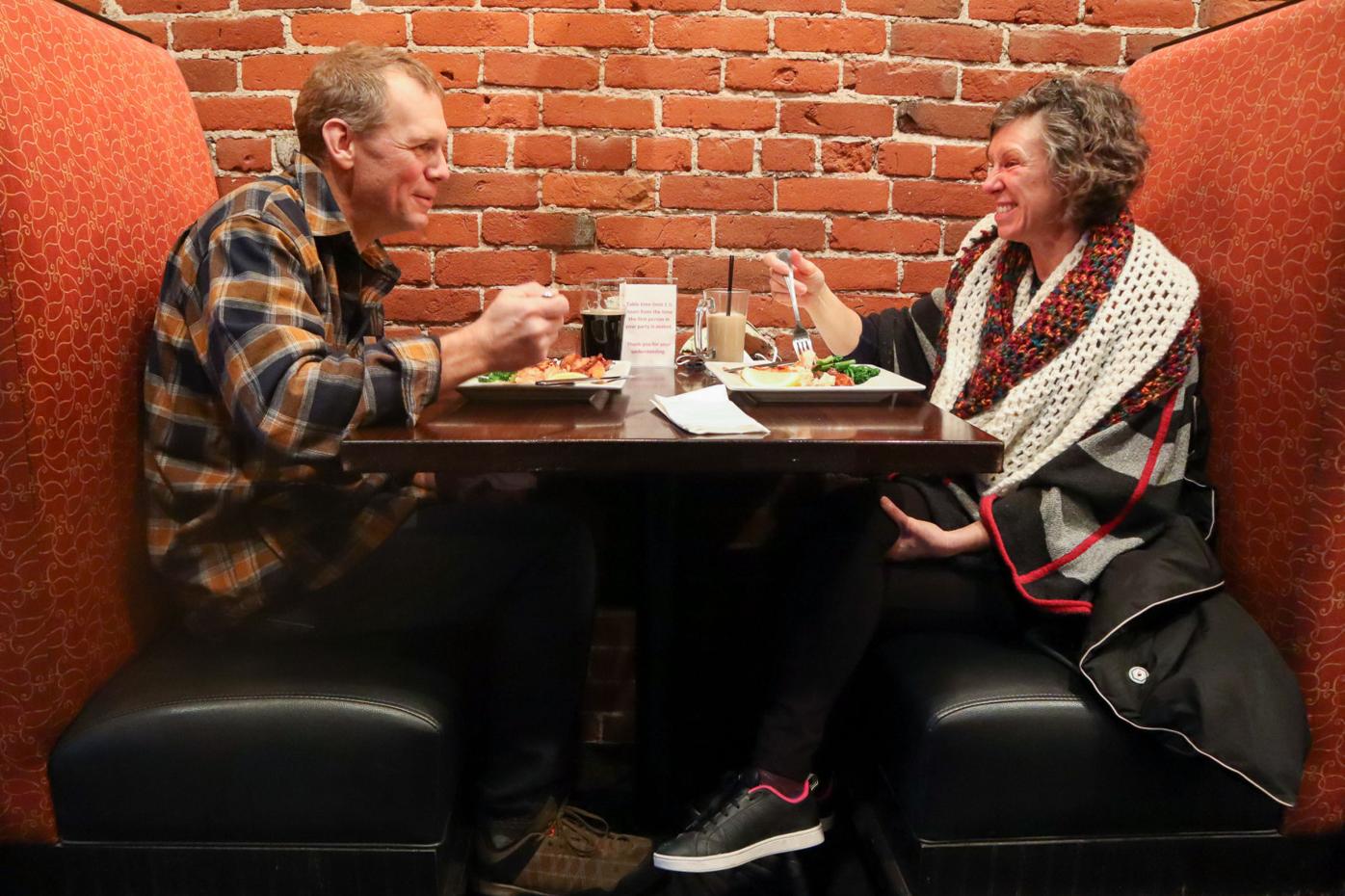 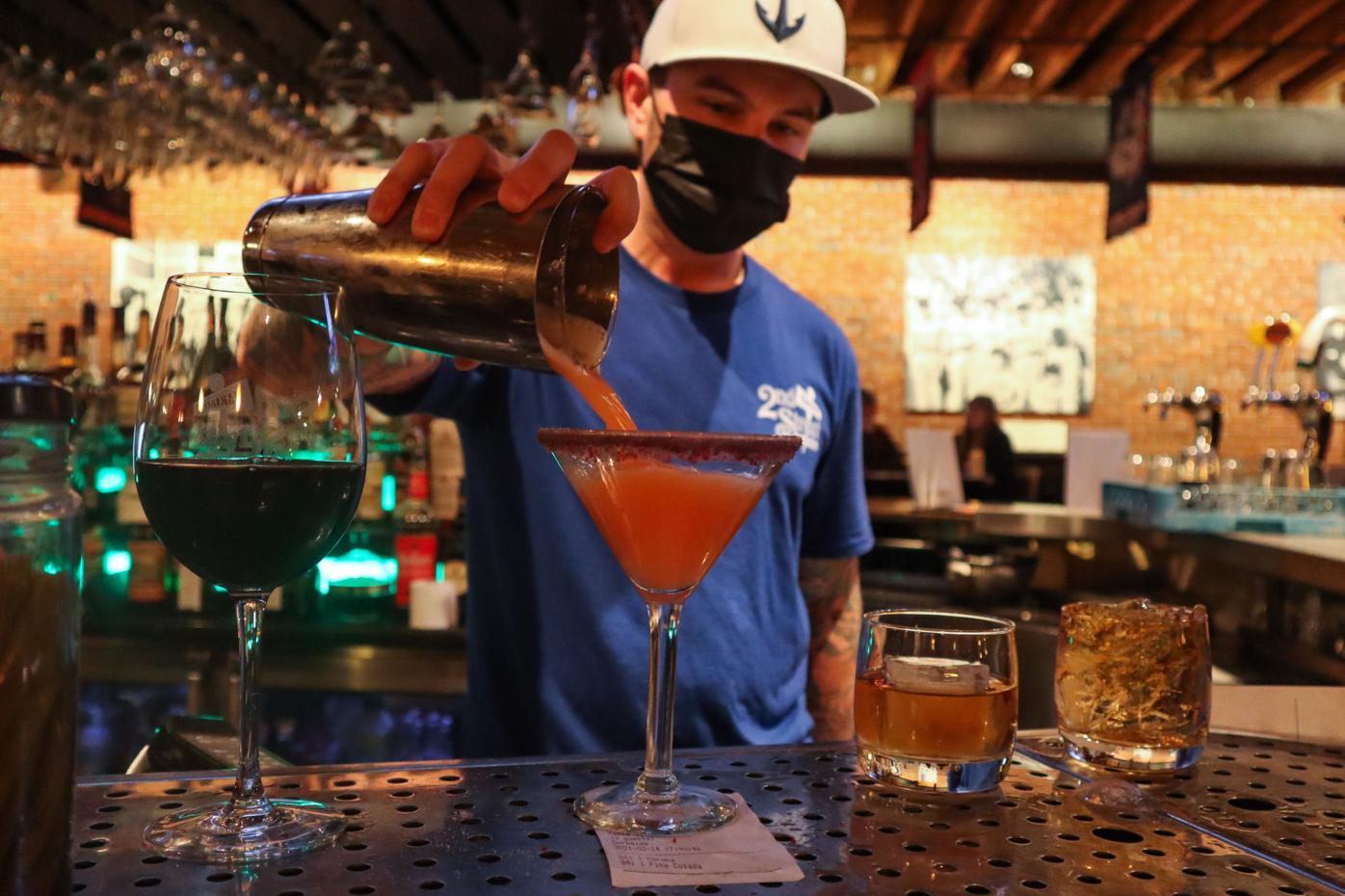 Jason Bruseau, a bartender at Second Street Grill, prepares a drink at the restaurant’s bar in Yakima, Wash., on Sunday, Feb. 14, 2021. 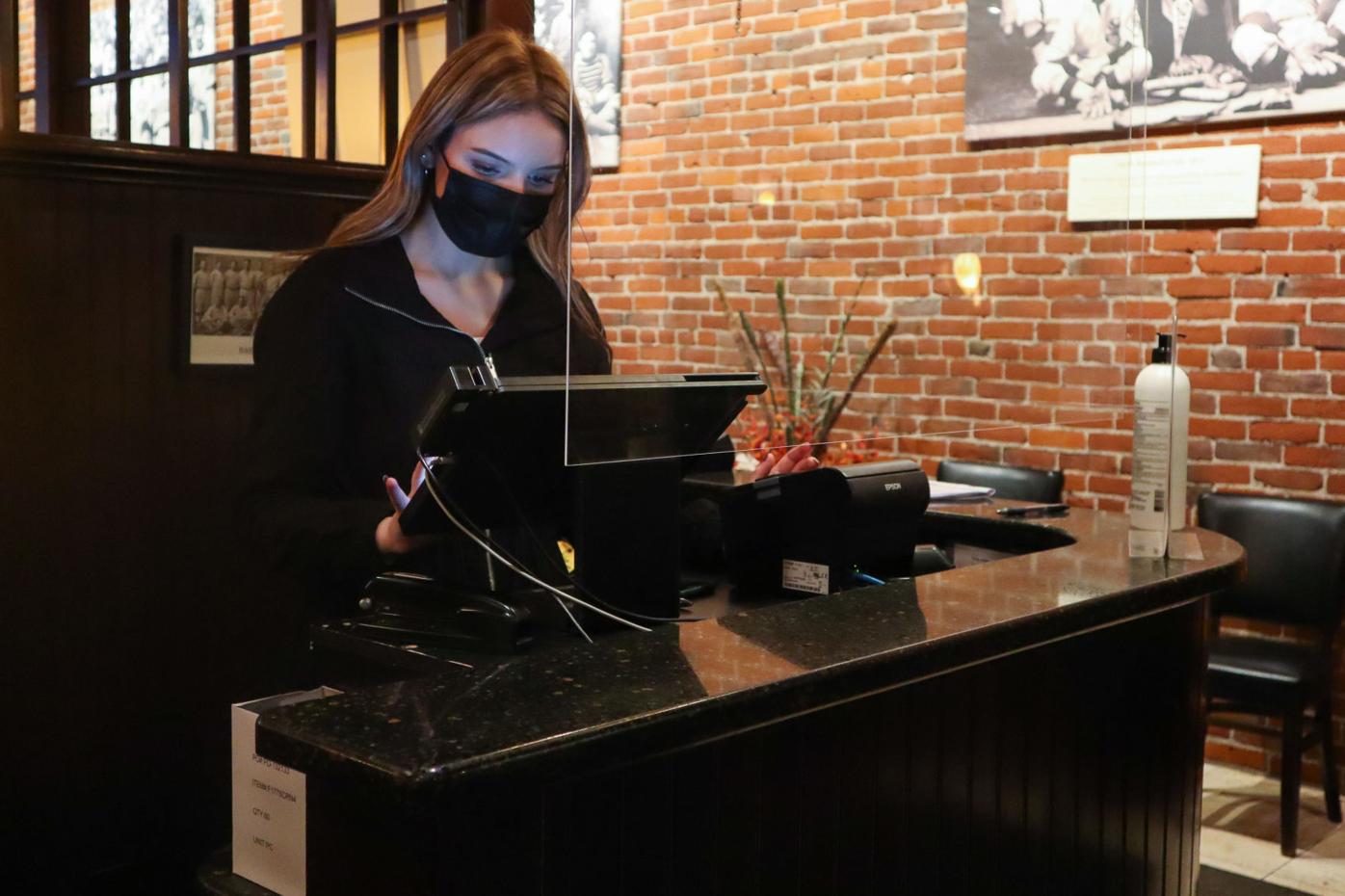 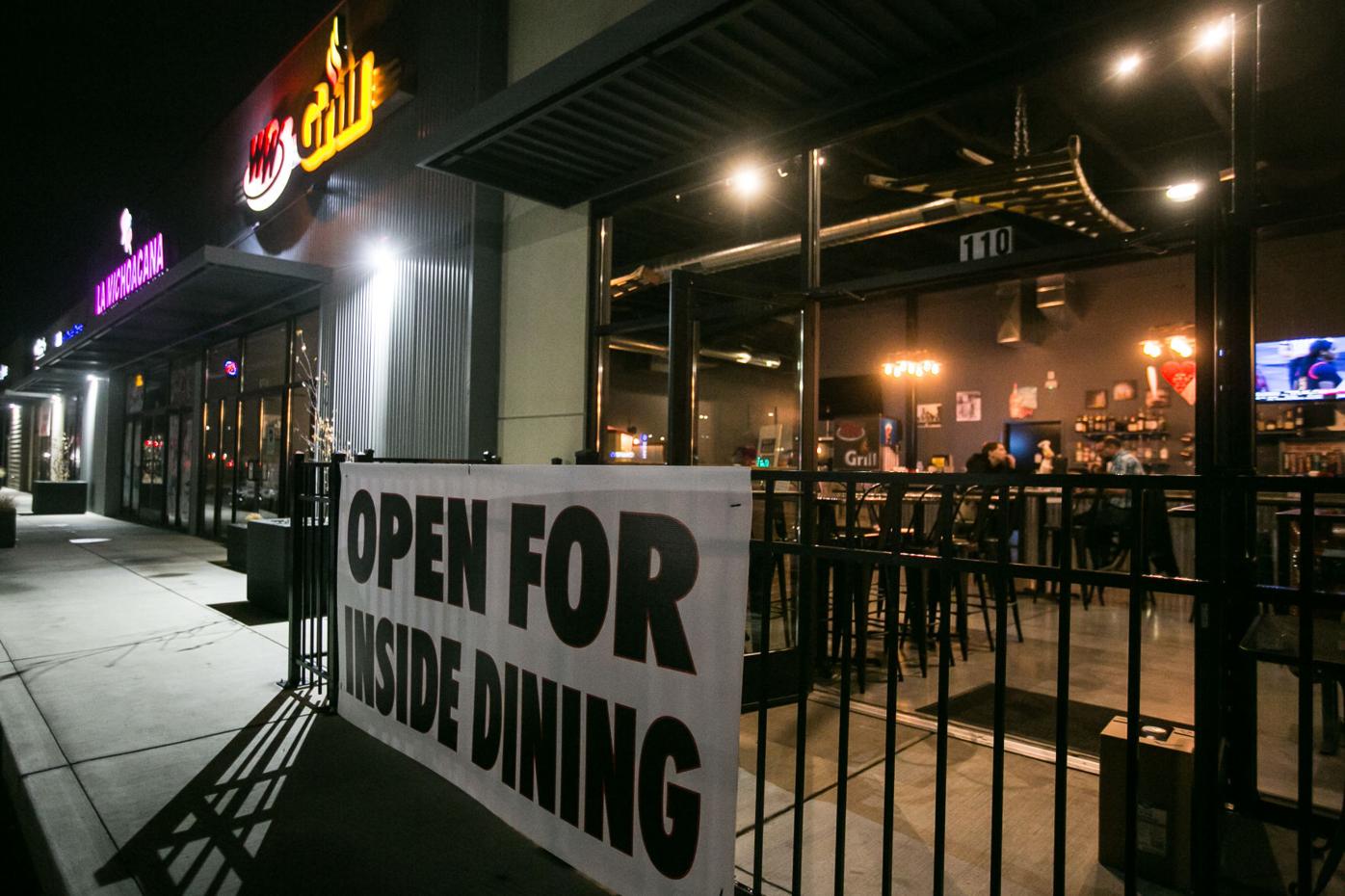 FILE — A sign on a gate reads, “Open for inside dining” at Warehouse West Grill in Yakima, Wash., Monday, Jan. 25, 2021. Local restaurants were able to use their indoor dining spaces under “open-air” dining guidelines, which required restaurants to keep doors and windows open. Yakima County and the rest of the South Central region has moved into Phase 2 as of Sunday, Feb. 14, 2021, which allows for indoor dining at 25% capacity without applying open-air guidelines.

Jason Bruseau, a bartender at Second Street Grill, prepares a drink at the restaurant’s bar in Yakima, Wash., on Sunday, Feb. 14, 2021.

FILE — A sign on a gate reads, “Open for inside dining” at Warehouse West Grill in Yakima, Wash., Monday, Jan. 25, 2021. Local restaurants were able to use their indoor dining spaces under “open-air” dining guidelines, which required restaurants to keep doors and windows open. Yakima County and the rest of the South Central region has moved into Phase 2 as of Sunday, Feb. 14, 2021, which allows for indoor dining at 25% capacity without applying open-air guidelines.

Yakima County and the other five counties in the South Central region are moving into Phase 2 immediately due to a revision in hospital admission data that show the region has met enough metrics to do so, providing a major boost for local businesses and high school athletics.

Gov. Jay Inslee said Sunday in a tweet that the delay was due to a hospital error.

“Due to a reporting error made by a hospital, the (South) Central region was the only one that didn’t move to Phase 2 this week,” Inslee tweeted. “I’m glad the hospital found the error, reported it and now the region can move ahead. This means our entire state is now in Phase 2.”

In Phase 2, restaurants can offer indoor dining at 25% capacity and indoor fitness centers can increase capacity to 25%. Additionally, high school sports leagues can start a modified fall sports season, as planned, later this month, with restrictions lifted on many sports under Phase 2.

Initially, Inslee announced Thursday that the South Central region, which includes Yakima, Benton, Franklin, Kittitas, Columbia and Walla Walla counties, were to remain in Phase 1 due to meeting only two of the four metrics state public health officials are tracking. The state’s other regions were able to move up or were already in Phase 2 due to meeting at least three of the four metrics, which look at new cases, hospital admissions, ICU capacity and positive testing rates.

According to the state Department of Health’s report, the region remained in Phase 1 due to an increase in hospital admissions and a high positive test rate.

“I knew for a fact that Yakima County’s data (on hospitalizations) was significantly down,” she said.

McKinney said this led to a massive coordination effort of the region’s elected officials and health departments to investigate the hospitalization numbers. She in particular praised the Yakima Health District for coordinating the efforts among the health districts and departments within the South Central region.

Through that effort, an error by the Providence St. Mary Medical Center in Walla Walla was discovered. The hospital had sent the state Department of Health data of all their COVID patient admissions rather than just their new admissions. As a result of the error, the South Central region appeared to see an increase in admissions.

“The error was unintentional, and we acted as quickly as possible to provide corrected data to the state,” said Susan Blackburn, the hospital’s CEO, in a news release from the state Department of Health.

The hospital sent the correct data to the state Department of Health. With the right data, it was clear the South Central region, like the rest of the state, saw a robust decline in hospitalizations and met enough of the metrics to move into Phase 2.

The state Department of Health said on its data dashboard that it would take a few days to update the dashboard but confirmed that it had reviewed the data and that the South Central region had met the hospital admissions metric.

McKinney said she received hospital admission rates data from health districts at all but one county in the South Central Region, and all had reported declines: Yakima, 36%; Walla Walla, 36%; Kittitas, 25%; Franklin, 25%; and Benton, 10%.

McKinney said she had urged Inslee and state officials to consider releasing data to elected officials and health officials before reopening announcements.

If that had been done before last week’s announcement, the error could have been caught sooner, she said.

“If we found out ahead of time, even a day or a few hours, we could have said, ‘Hey, we don’t think this is right,’” McKinney said.

Newhouse, in a written statement Sunday, credited the efforts of local leaders and criticized Inslee’s approach to reopening.

“As demonstrated by this situation, it is the local health officials and elected leaders on the ground who are best equipped to manage the ongoing response to the pandemic — not the governor,” Newhouse wrote.

Still, for McKinney, this was a massive victory for the community.

“We earned this,” she said. “We’re moving to Phase 2 because of what everyone in Yakima County has done.”