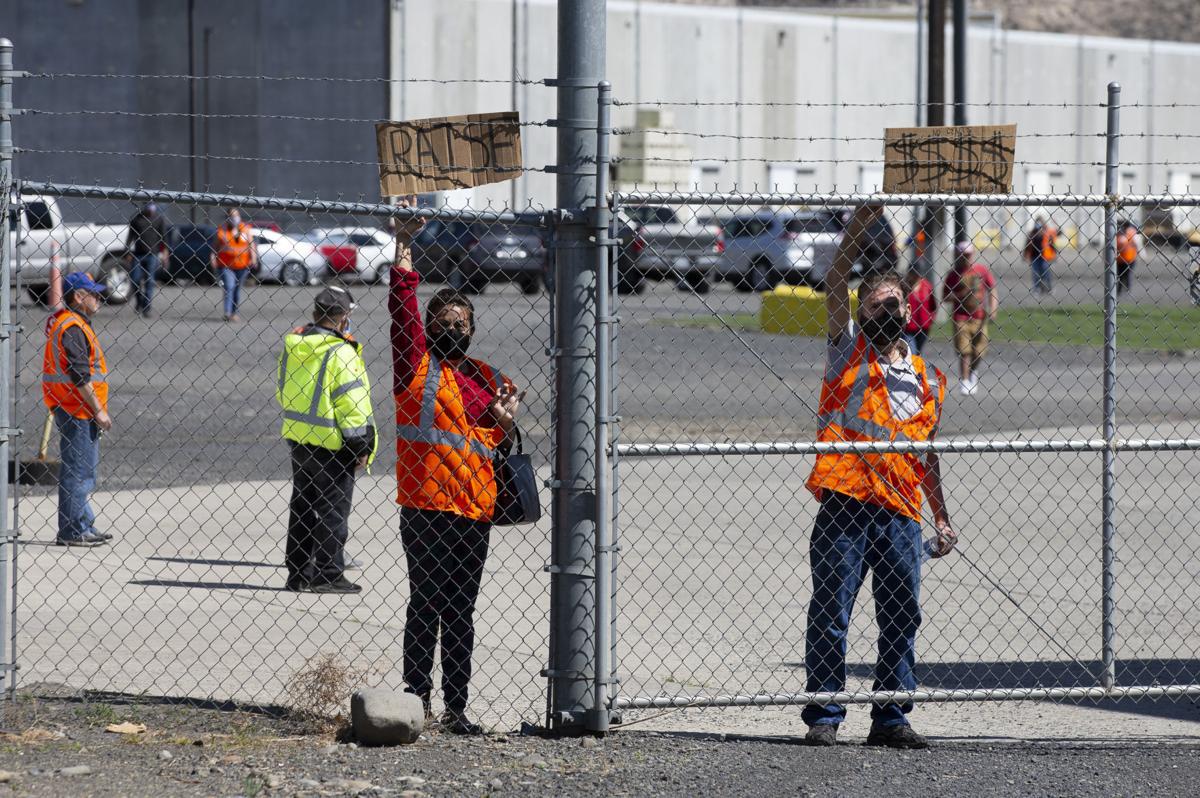 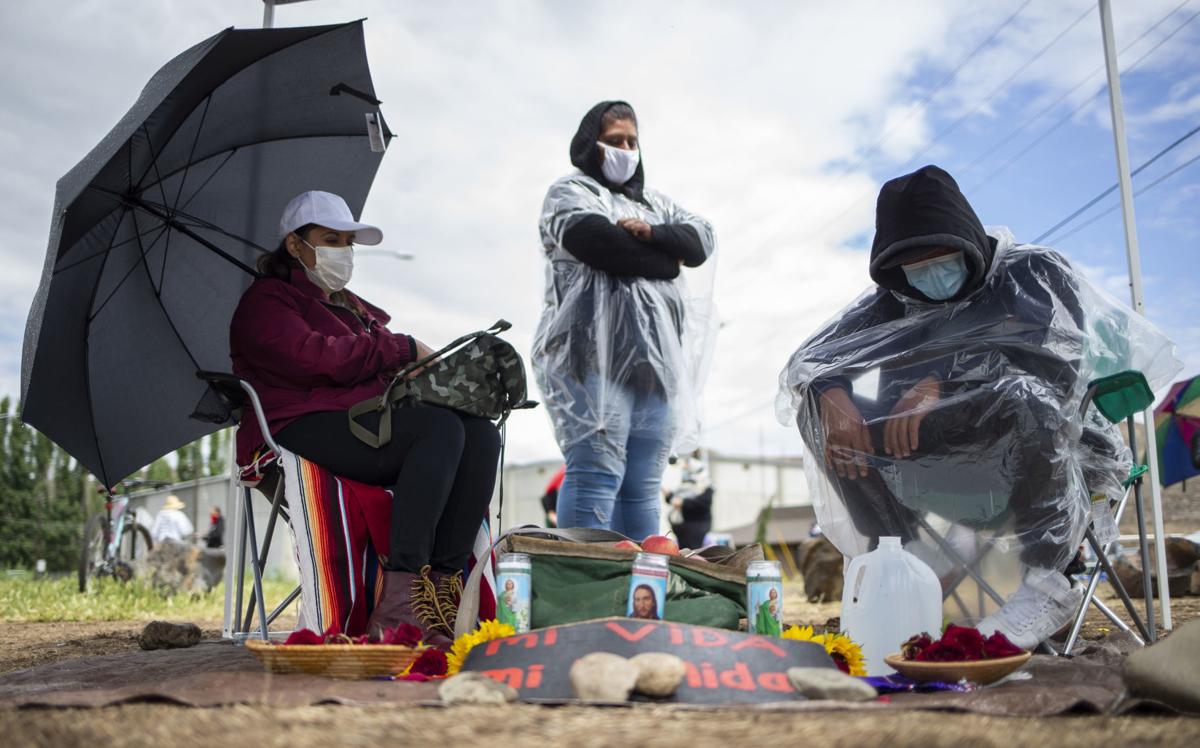 Allan Bros. Fruit employees Maribel Medina, left, and Cesar Traverso, right, begin a hunger strike Tuesday, May 19, 2020, in Naches, Wash. Some Allan Bros. workers have been on strike since May 7 because of safety concerns related to the novel coronavirus pandemic. 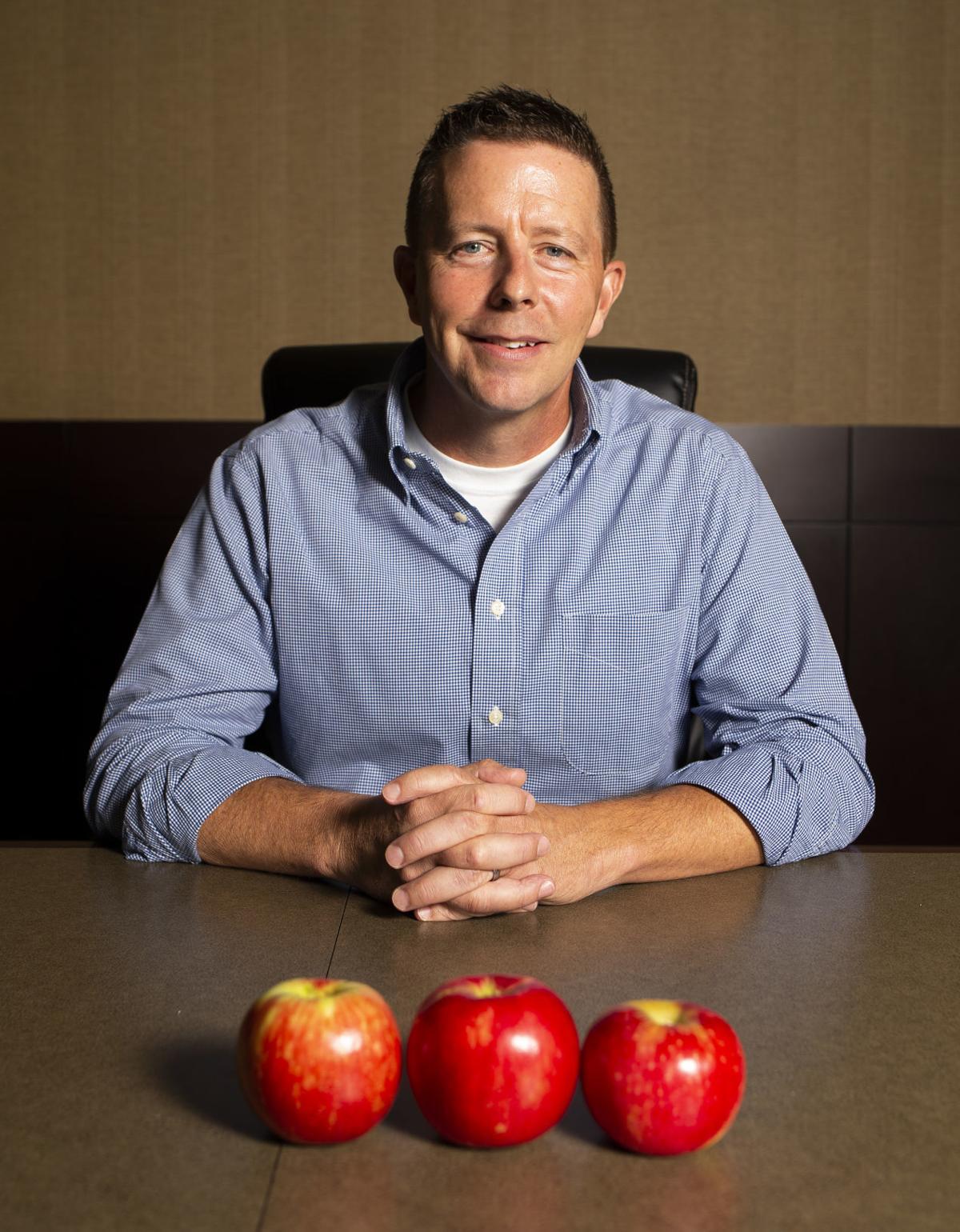 Allan Bros. Fruit employees Maribel Medina, left, and Cesar Traverso, right, begin a hunger strike Tuesday, May 19, 2020, in Naches, Wash. Some Allan Bros. workers have been on strike since May 7 because of safety concerns related to the novel coronavirus pandemic.

Workers at one of Yakima County’s apple packing houses filed an unfair labor practices complaint with the National Labor Relations Board this week, alleging retaliation against workers who choose to strike.

The board is an independent agency of the federal government, responsible for enforcing U.S. labor law regarding collective bargaining and unfair labor practices.

The complaint alleges that Allan Bros., located in Naches, interrogated and threatened workers who chose to strike and disciplined an employee who brought strikers water.

Allan Bros. CEO Miles Kohl denied the complaint’s claims Thursday. He said agriculture operations are vital to the nation’s food supply and the company has “every interest and desire to maintain a healthy community and treat our employees with the respect, care and attention they deserve.”

“We understand and value our workers’ right to protest,” he said. “We have listened, acted, and will continue to evolve our best practices for the benefit of all our employees.”

The strike at Allan Bros. started May 7, with workers walking out to demand increased transparency about COVID-19 cases, improved safety and sanitation measures and hazard pay.

The strike was the first in a series of walkouts at seven fruit packing plants in the Yakima Valley, where employees made similar requests.

Kohl said previously that Allan Bros had started paying workers an additional $1 an hour, effective May 5.

The company issued face masks and face shields to all employees and adopted protocols recommended by the Yakima Health District after a May 8 site visit. Allan Bros also plans to hold jobs for striking workers who return to work, Kohl said.

“We have communicated to our employees their rights and protections and have followed through with those protections for all employees who protested and who have returned to work,” he said Thursday.

The workers’ two-page complaint, filed with the help of Columbia Legal Services and Barnard Iglitzin & Lavitt LLP and the farmworkers union Familias Unidas por la Justicia, alleges Allan Bros. has interrogated workers about their strike activity, threatened to discipline workers who join the strike, and used one-one-one conversations with employees promising benefits or wage hikes for nonstrikers in an attempt to stop the walkout.

Kohl said the complaint asserts that providing appreciation pay to essential workers violated their right to strike. That wasn’t the company’s intent, he said.

“During our good faith negotiations, employees wanted an increase in pay for their efforts during the COVID-19 pandemic,” he said. “To that end, we implemented a $1 per hour increase for employees who have been with us for 90 days or more.”

Kohl said the compensation also was in recognition of hardships faced by employees during the state’s stay-at-home order, such as additional expenses for child care and the increasing cost of groceries. He said no additional compensation or benefits beyond the $1-an-hour raise have been offered to those who refused to strike.

Kohl also said the company has not interrogated, disciplined or fired any strikers who walked out.

“However, we have an obligation to all of our employees to prevent harassment, discrimination, and to maintain safety,” he said. “To the extent that any one employee’s conduct violated our policies, it has been and will be consistently addressed.”

Kohl said Allan Bros is constantly adjusting its practices to address COVID-19. A May 8 review by the health district concluded the company was meeting established safety guidelines.

Allan Bros. was also inspected by the Washington State Department of Labor and Industries, which said the company met health and safety standards.

“We have implemented recommendations made to us by each agency,” Kohl said. “We provide and require face masks and face shields, implement social distancing, and utilize plastic barriers in areas where social distancing can be difficult to achieve.”

“We are here to support these workers through whatever the company tries to throw at them,” he said. “The workers want to work, but not at the cost of their health and their families’ health.”

Columbia Legal Services said the National Labor Relationships Board contacted the workers’ representative on Wednesday to start an investigation.

The organizers started the account to support the more than 300 agricultural workers in Yakima who have been on strike for the past two weeks, calling for hazard pay and guarantees of safe working conditions. The fund had raised close to $33,000 of a $100,000 goal from more than 600 donors as of Thursday afternoon.

Not everyone in the community has supported the strikers, however.

The Yakima County Sheriff’s office responded to calls at Allan Bros earlier this week after a man arrived on site with a gun and threatened to shoot the workers. The man was arrested for malicious harassment after he returned to the site and said he made the threat, a sheriff’s spokesman said.